The outbreak started on the East Coast and swiftly spread through the Midwest and beyond. There have been three reported cases in Illinois —3 wild Canada Geese in Will County, multiple birds in a noncommercial backyard poultry flock in McLean County, and 1 mallard duck in Champaign County.

The Centers for Disease Control and Prevention (CDC) believes the risk to the general public’s health from current H5N1 bird flu viruses is low. However, those with job-related or recreational exposure to birds are at higher risk of infection. The CDC is watching this situation closely and taking routine preparedness and prevention measures in case things change.

Here's how we’re responding to the outbreak.

Willowbrook Wildlife Center and many other rehabilitation centers in Illinois are taking actions to limit the spread of the disease, including bulking up on biosecurity measures and increased personal protection equipment.

One of the highest levels of mitigation for this disease is halting or curbing the intake of avian species, or at least species of high risk. This would be devastating as we have entered spring migration and baby animal season.

Willowbrook has no plans to limit these animals at this time. We will use a tiered approach if cases of avian influenza become exponentially worse. As we have resident education animals on site, we also need to consider their protection as well as those in rehabilitation.

For the protection of the chickens, staff, volunteers and public, Kline Creek Farm is keeping its chickens in their coop. It has also canceled all its egg collecting programs and is limiting the staff that enter the coop.

Kline Creek Farm continues to sell washed eggs at the Timber Ridge Visitor Center and will follow Illinois Department of Agriculture guidelines on egg sales. It has discontinued the practice of sending surplus eggs to Willowbrook to reduce the risk of spreading the virus.

Kline Creek Farm will purchase chicks as usual this spring to replace older birds in the flock. The chicks will be raised indoors and then moved to the chicken coop when they are old enough. If Kline Creek Farm staff sees signs of illness, they will work with the Illinois Department of Agriculture on next steps. They will continue monitoring the situation closely.

What is avian influenza?
Avian influenza (AI), or bird flu, is a virus that primarily affects poultry and wild birds. AI viruses are often known by the combination of two different proteins: hemagglutinin (H) and neuraminidase (N).

AI also comes in two different forms: highly pathogenic avian influenza (HPAI) and low pathogenicity avian influenza (LPAI). LPAI circulates naturally in wild waterfowl and shorebird populations such as geese, ducks and gulls These species serve as natural reservoirs and generally do not show any significant signs of disease (there are surveillance programs for LPAI in wild birds and it is routinely found). LPAI also rarely cause issues in poultry species.

However, AI can easily mutate and when the H and N proteins exchange between two or more LPAIs, HPAI can be formed. It’s similar to the human influenza virus (flu), which changes every year and requires a different vaccine. HPAI (usually H5N1, H5N2 or H5N8) are more infectious and can infect domestic poultry species with high morbidity (sickness) and mortality (death).

Unfortunately, native wild species can also harbor HPAI and show no/minimal to severe signs. They can spread the disease via migratory flyways to commercial poultry populations over a large geographic region.

What are the clinical signs of avian influenza?
In humans, clinical signs can include mild flu-like symptoms (fever, upper respiratory signs) to severe respiratory disease or pneumonia. Infection in humans is unlikely with the H5N1 variant (unlike the Asian H7N9 variant that caused severe disease in humans). However, those individuals with close and prolonged exposure to infected birds are at much higher risk, including those who work in wildlife rehabilitation or farm settings.

Sudden death, especially of multiple birds, can also occur. As mentioned above, in species like waterfowl (geese, ducks) and shorebirds (including gulls), there may be no clinical signs. Raptors with HPAI are often clinical and progress rapidly within a few days. They have found HPAI in some songbirds, but they are still considered a low-risk species.

How is avian influenza spread?
Avian influenza is shed in large concentrations in feces, but is also spread via saliva and other bodily secretions. Direct bird-to-bird spread has the highest risk of disease spread, but it can also be spread via fomites. Fomites are items that are at high risk for spreading infectious disease particles.

Almost anything that has contact with AI can serve as a fomite, making humans one of the highest risks via hands, clothing, shoes, equipment, etc.

HPAI can live weeks to months at cooler temperatures (even longer in water and below freezing), but rarely more than a few days at room temperature or warmer. It is generally easy to remove with many disinfection agents, but requires appropriate cleaning to remove any organic/inorganic material beforehand.

Why is this important?
HPAI poses an extreme risk to the U.S. and international poultry trade. Mass outbreaks could cost billions of dollars and millions of lives in poultry species.

In the 2014-15 outbreak — considered the most significant animal health event in U.S. history — around 50 million birds died or were euthanized. This is a reportable disease and response to positive cases is managed by U.S. Department of Agriculture’s Animal and Plant Health Inspection Service. If a positive case is found in a rehabilitation setting, a forced 30-day quarantine (no animals in, no animals out) is likely to be implemented. 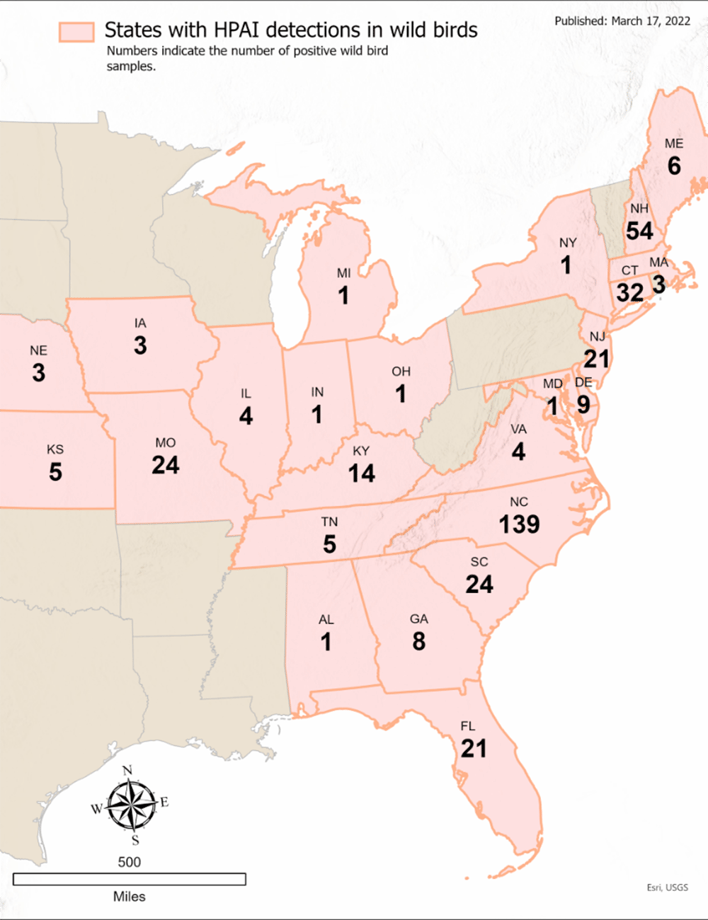