A Perfect Day in the Life of an Aquatic Biologist

A Perfect Day in the Life of an Aquatic Biologist 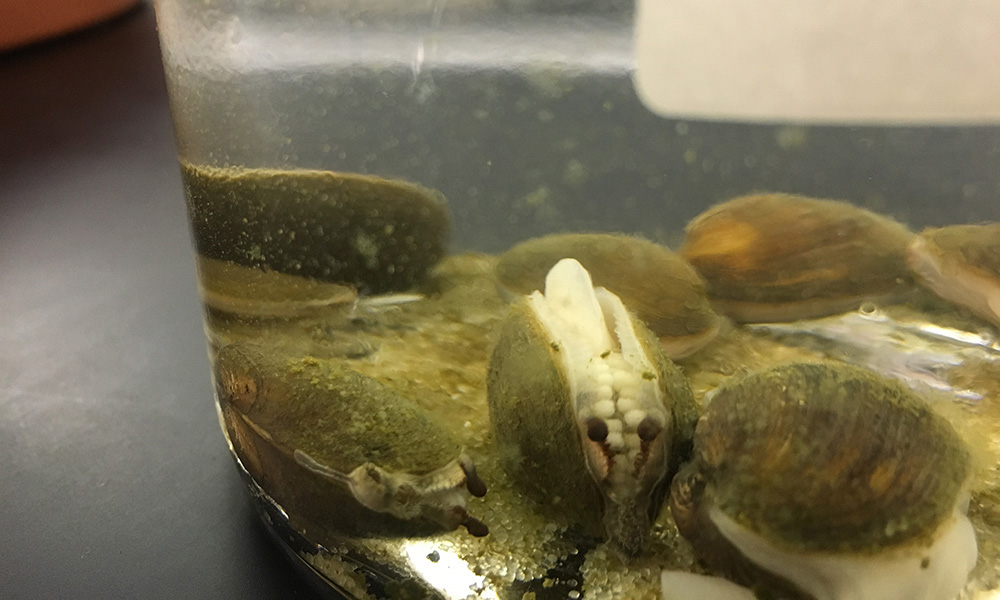 In early June three staff from the Forest Preserve District’s Urban Stream Research Center in Warrenville made an exciting discovery while preparing for a stream restoration project at Blackwell Forest Preserve.

As is routine before every such project, the group went out to search the creek bed for mussels that — if not found — could be damaged by construction equipment, or in this case and worse yet, be lost forever as an old channel is filled in.

On this particular day, one that Aquatic Research Center Coordinator Jessi DeMartini now describes as “a perfect day,” their efforts paid off plenty as the crew located a collection of 50 Lilliput mussels within a 2-meter-square area.

The Lilliput (Toxolasma parvum) is one of the smallest common native freshwater mussels in North America, reaching an adult size of about 1. 5 inches (or a little bigger than a quarter). Due to their small size, Lilliputs are hard to locate, and DeMartini hadn’t found a live one in years. These unassuming little brown mussels remain buried in the substrate most of the year, only revealing themselves when it’s time to spawn, or release their larvae (called glochidia.) 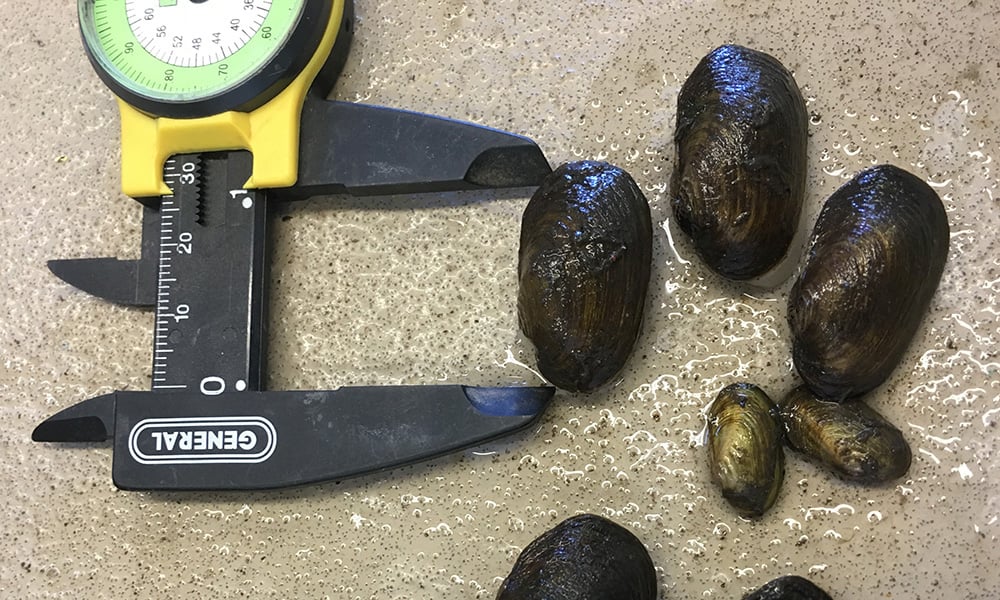 The process of searching for mussels, also known as noodling or grubbing, can be somewhat time- consuming work. Crews wade through the water digging through the substrate by hand in hopes of finding their bounty. Often they can’t see through the water and rely solely on touch. Over time they begin to feel the difference between rocks and mussels.

When conditions are just right — meaning water levels are low, the water is clear and the sun is out — you can actually see freshwater mussels filter feeding on the creek bottom. “On a nice summer day, there’s no place I’d rather be than crawling around in a stream,” DeMartini said. “It’s cool, there are no bugs, and there’s a never-ending possibility of magic and mystery under the water.” 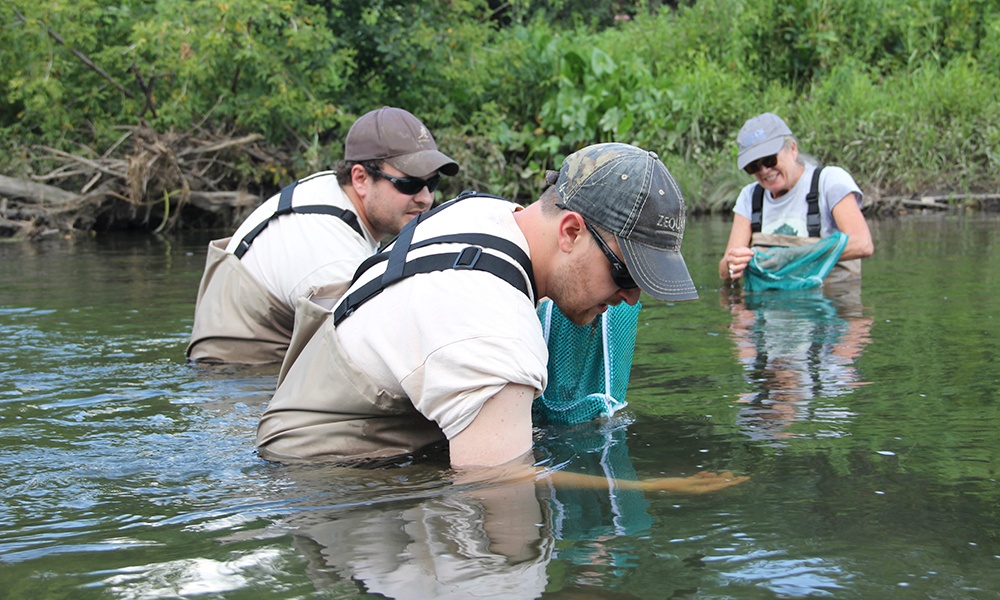 Right, DeMartini and her crew search the creek bed for mussels.

In her element, as DeMartini and crew scoured the creek that afternoon, a pearly white muscular foot (mussels only have one) caught DeMartini’s eye just as the mussels started emerging from the sand. “We kind of just sat there as more and more emerged,” she said. “It was very exciting for a nerdy biologist.”

In all her years, DeMartini has never collected so many Lilliputs at one time, let alone in such a small area. “It was apparent our timing was perfect as the group appeared to be in the brooding period,” she said. “It was a true ascending!”

The brooding period is the time of year when mussels release their glochidia, or parasitic larva that attach themselves to fishes’ gills.

The Lilliput’s strategy is a classic case of bait and switch. The Lilliput ‘lure’ their fish hosts in by twirling red caruncles (which look like tiny red balls on a stalk), wave their mantles with red edges and display what look like white teeth but is actually a swollen marsupial gill structure that holds little delivery packages called “conglutinates” filled with glochidia and unfertilized eggs that hold the package together. 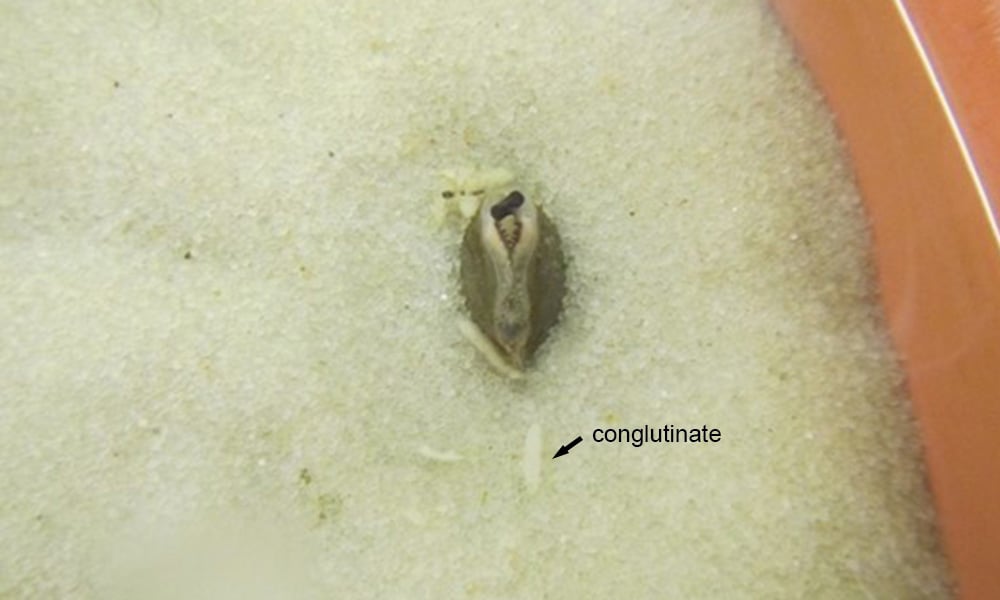 Each Lilliput conglutinate "package" looks like a grain of white rice.

Once the host fish is attracted to the lure as possible food, the mussel releases its conglutinates in hopes the fish will eat it and voila, the glochidia are free to attach to the fish’s gills. What follows is a short obligate parasitic phase of attachment where the glochidia grow internally, beginning their metamorphosis into a juvenile. After a few weeks, they release themselves from the fish’s gills and drop into the substrate of the stream, where their perilous journey as a future adult begins. (As far as anyone knows, this process — necessary for most all freshwater mussels’ reproductive success — doesn’t hurt the fish.) 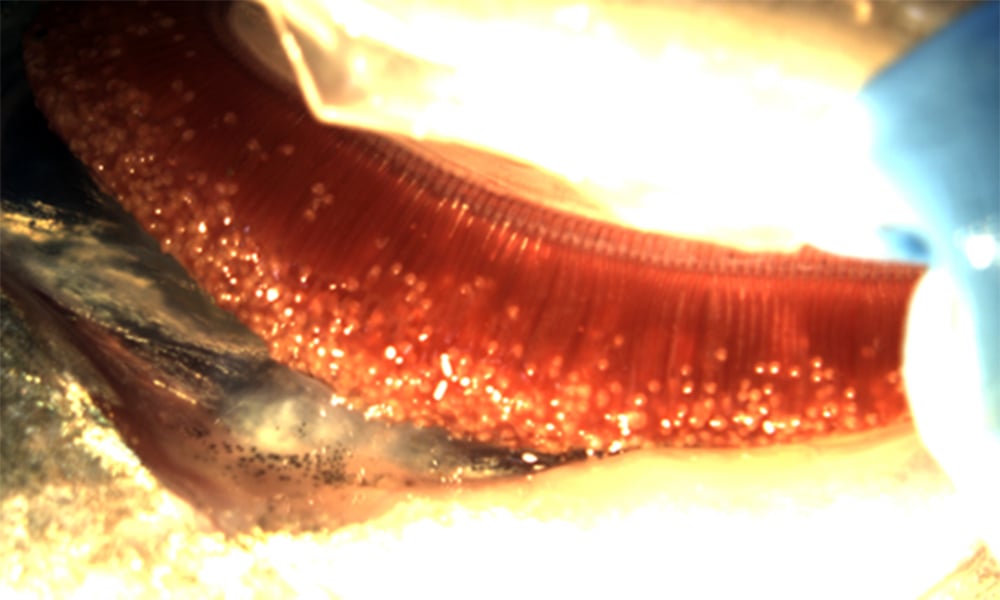 Close-up image of tiny glochidia on a fish's gills. 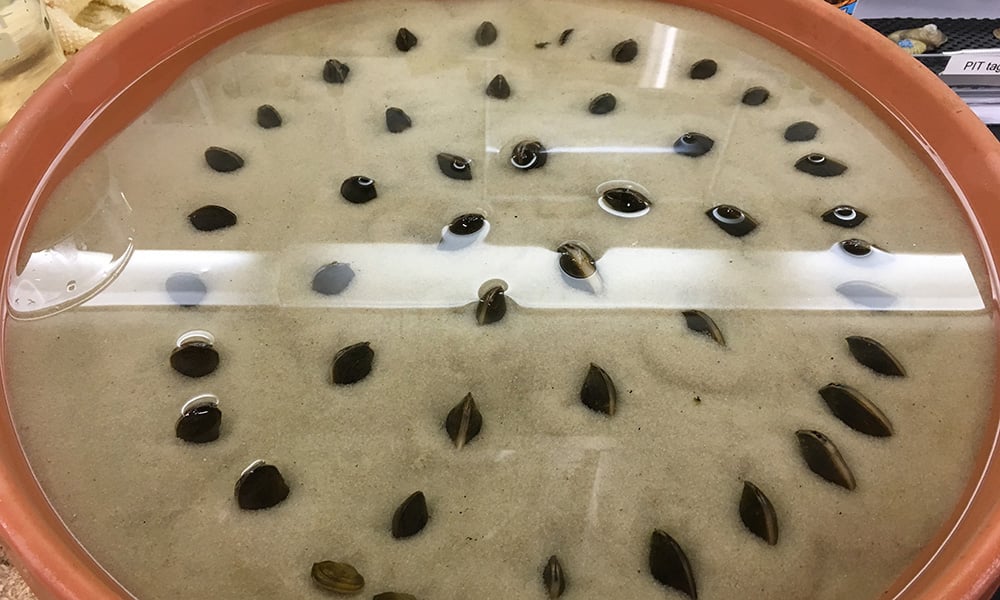 After the mussels released their conglutinates, staff separated out the viable glochidia and put them in an appropriately sized bucket of water with aeration to inoculate the host fish. (The known hosts for the Lilliput are green sunfish, bluegill, black crappie and johnny darters.)

The fish were gently agitated in the water to facilitate glochidia attachment. A number of weeks later, after successful metamorphosis, they are starting to drop off the fish as juveniles. Now the rearing and feeding of the juveniles begins in the lab.

Later this summer staff will tag and release the adult Lilliputs upstream of the restoration project in a habitat similar to the one where they were located. In a year or so, after they have had a chance to grow a bit, the next generation will be tagged and released. DeMartini hopes to encounter them all again someday on a future noodling expedition. 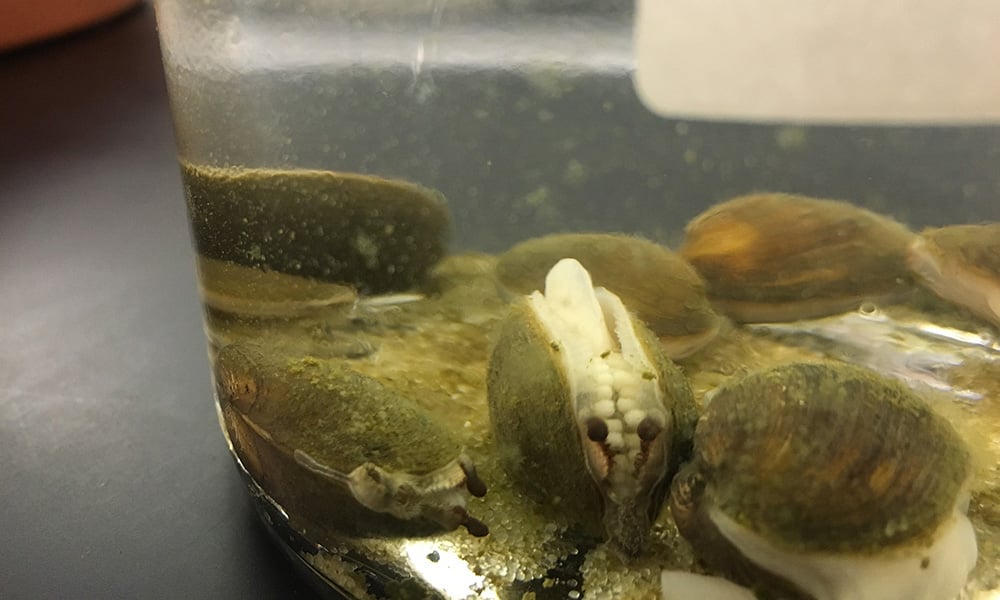 This open Lilliput's white muscular foot is visible to the rear of the mussel.