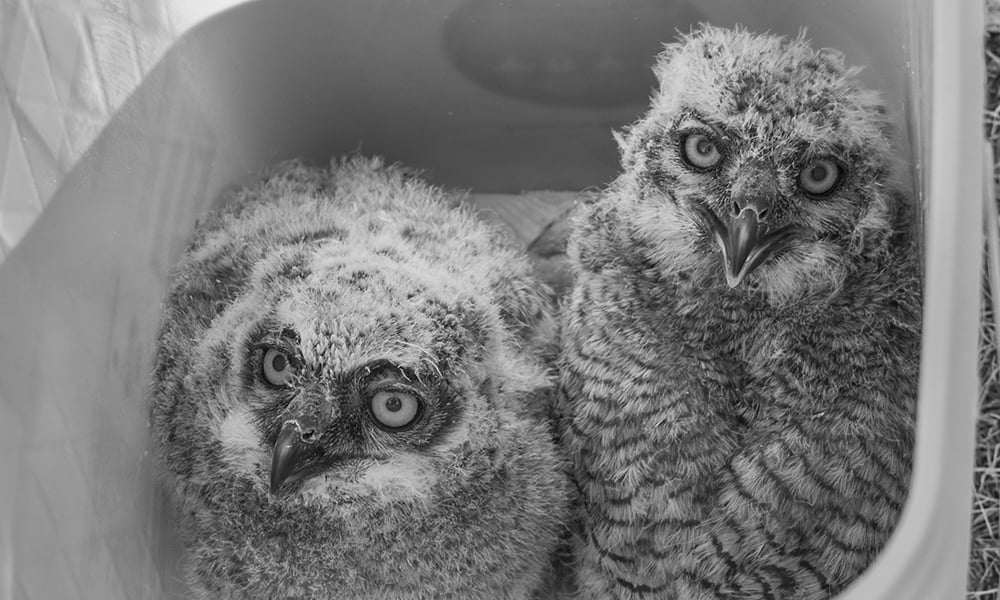 Sometimes it takes a village to help raise a great horned owl, as was the case when Forest Preserve District employees and DuPage County residents recently helped reunite three owlets with their families.

It's all in a day's work to climb trees for Forest Preserve District forestry worker Kale Nelson. But he went to great heights to reunite three great horned owlets with their families.

“It was a very gratifying experience, especially when the mother acknowledged the babies,” Nelson said. “It was a great feeling to help those little owlets out and give them the best chance for survival.”

Nelson returns one of the owlets to its new nest platform in Bruce Simak's front yard in southeast DuPage County.

In separate incidents, the great horned owlets had fallen out of their treetop nests — possibly due to wild spring weather or unstable nests — in DuPage County and were brought to Willowbrook Wildlife Center. After Willowbrook staff checked them for injuries and cleared them for release, they set about returning them to their families with help from District forestry workers.

“It is common for owlets to fall out of the nest,” said Willowbrook naturalist Krystle Piwowar. “We recommend bringing them in to Willowbrook for an exam even if the parents are still caring for them on the ground to rule out any injuries that may have happened with the fall."

Caution should be used with great horned owlets, as parents are sometimes quite protective. It is best to first observe the area for a time to see if parents are around or a nest can be located. Then, call Willowbrook at 630-942-6200 or a licensed rehabilitator before taking any action.

If you find a wild animal exhibiting signs it needs help, get the information you need to assess its condition at our wildlife rescue advice page. Determine if it needs help, and then take action.

The owlet on the left was found elsewhere and could not be returned to its nest. The smaller owlet on the right fell from a tree in Simak's front yard.

Two of the owlets were returned to a nest in Bruce Simak’s front yard in southeast DuPage County. One of the owlets came from the nest, but the second one, which was slightly bigger, came from another nest that had been destroyed.

“I found out about the owlet when my neighbor texted me and told me the baby was on the ground below the nest,” Simak said. “I went outside to see and to try to get a photo and was quickly dive-bombed by one of the parents. I never heard a thing. My neighbor warned me and I got out of there fast.”

Chicago Bird Collision Monitors were called and a volunteer came and got the owlet and brought it to Willowbrook.

An owl parent watches closely as Nelson installs a nest platform in a tree in Simak's front yard.

The mother owl watched from her nest about 15 feet above while Nelson climbed about 40 feet up the tree and positioned himself near a spot that could hold a wooden platform to serve as the owlets’ new home. From the ground, Forest Preserve District forestry foreman Brian Fowle hoisted equipment up to Nelson, who then hammered the platform to the tree and filled it with bedding to make a nest. Fowle then carefully hoisted up the owlets in a covered container, and Nelson donned thick gloves before gently placing them in their new home.

“Shortly after the crew left, the mom came down from her rapidly deteriorating nest and began tending to her baby and its new friend,” Simak said. “The dad is tending to the other owlet in the old nest. They seem quite content. I’m glad I got to watch all this unfold right in my front yard. I learned a lot. These owls have been coming back for years, but this is the first time they set up a nest on our property. It’s pretty cool to watch all this go on. I’m glad I could help a little.”

Nelson selects the tree limb for the nest platform in Simak's front yard.

While at the site, the crew was contacted by Willowbrook about another owlet that was ready to be re-nested with its family in Downers Grove.

The Downers Grove owlet appeared to have an injured wing when it was brought to Willowbrook. But an X-ray showed the wing was OK, so it could be reunited with its family in a nest high up in a pine tree. Because the nest was so high and in such poor shape, Nelson again installed a wooden platform just below the nest, filled it with bedding and gently placed the owlet inside.

The owlet waits in a container until it can be relocated with its family in a Downers Grove backyard..

“It’s good to see the efforts of all people involved: the concerned homeowners who noticed the owlets and took time to contact the proper people to get the birds the help they needed; Willowbrook Wildlife Center staff who helped them regain their strength; and the grounds staff for installing the nest box and placing the owls back with their mother,” Fowle said.

Piwowar said great horned owls do not build their own nests. They often use an abandoned squirrel or bird nest or tree cavity.

An owl parent watches closely as Nelson works below to secure the nest platform in Downers Grove.

“Sometimes they will find a nest that isn’t in the best shape but still use it,” she said. “This was the case with the re-nestings we encountered this week.

“In these cases, we ask the homeowners to allow us to install nest boxes that will remain in the tree for years to come,” Piwowar said. “Hopefully these will provide the ideal place for the owls to nest to help keep the owlets from falling out of them.”

For years Willowbrook staff has worked with foresters and rangers to safely return native wildlife babies to their families. Some years there are more than others, but three in one week is quite a bit, they admit.

Nelson secures the nest platform in the pine tree in Downers Grove.

“In general, animals are better raised by their parents in every situation, as long as they are healthy and uninjured,” Piwowar said. “We try to re-nest owls as often as we can.”

An owlet will begin to explore its world and venture from its nest onto nearby branches, called “branching,” at about six weeks old. At seven weeks old the owlet is able to take up to three or four brief flights per day to spread it swings and strengthen its muscles.

The fledgling cannot fully fly until about 10 – 12 weeks. Fledgling siblings will stay together after leaving the nest and take up in a nearby tree for several weeks. Their parents will return and feed them during the first few months, delivering small pieces of prey.

During the spring season, Willowbrook reminds residents that it’s normal for wild animals to leave their young alone for several hours at a time while they look for food. Inexperienced individuals who try to raise or treat them inevitably produce unhealthy, tame animals that cannot survive in the wild. Human intervention may be needed if an animal is injured or truly abandoned. 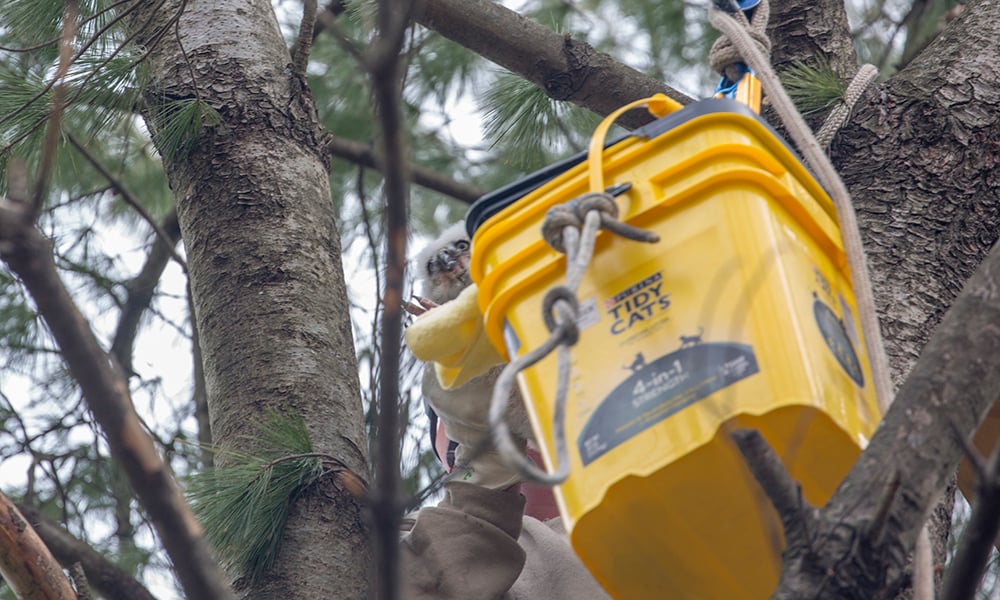 Nelson returns the owlet to its nest in a Downers Grove backyard. 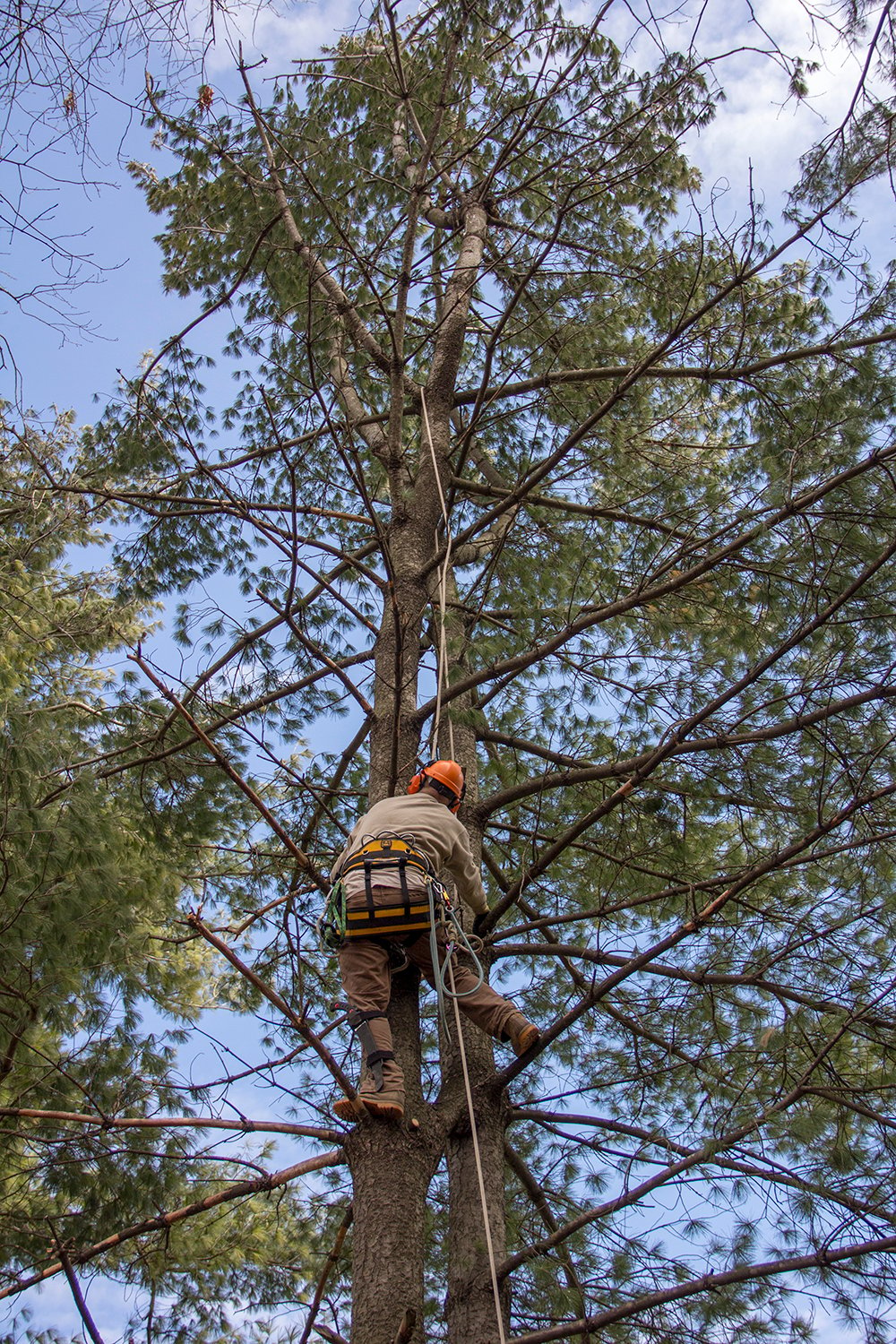 Nelson climbs the pine tree in Downers Grove to return the owlet.