Summer’s heat is behind us, making afternoons perfect for picnics. But before you head out for the forest preserves’ vivid golds and fiery reds, remember the other bright sights you’ll likely see: yellowjackets.

The insects we commonly call yellowjackets are actually different types of wasps. The two most common in Illinois, eastern and German yellowjackets, are both considered “social” wasps because they live in colonies, each with a single reproducing queen and hundreds — sometimes thousands — of offspring.

In spring and early summer the queen’s brood is made up entirely of infertile females called “workers,” whose sole job is to feed the ever-growing colony and take care of the nest. Not until late summer and early fall will the queen start producing males, called “drones,” and fertile females to mate with yellowjackets from other nests. Any females that become fertilized — next year’s queens — will be the only members of the colony to survive winter; the original queen and all of her remaining offspring will die. 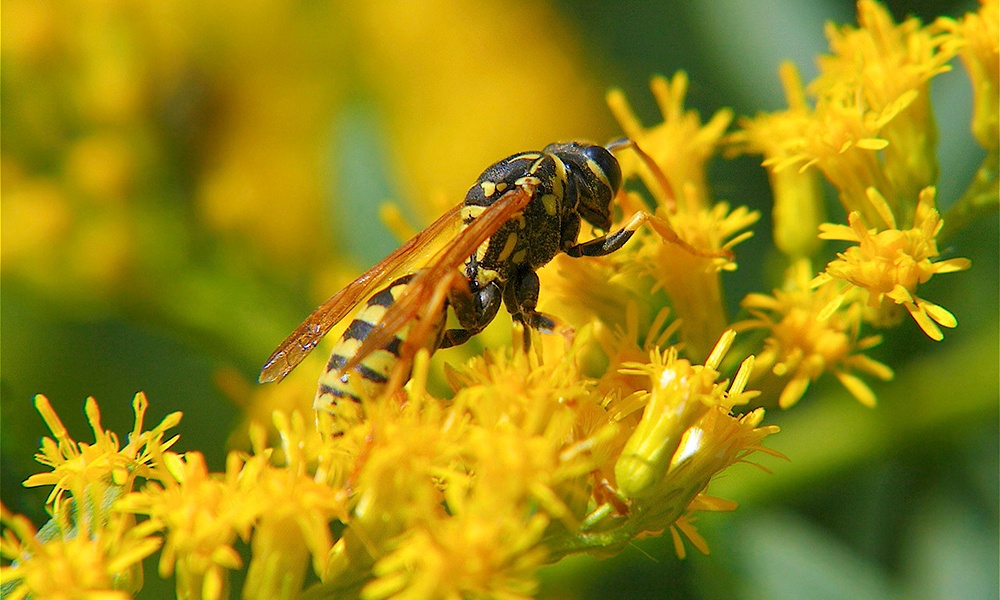 Adult yellowjackets get some of the sugar in their diets from flowers, such as fall-blooming goldenrod. Image by Dan Mullen/CC BY-NC-ND 2.0 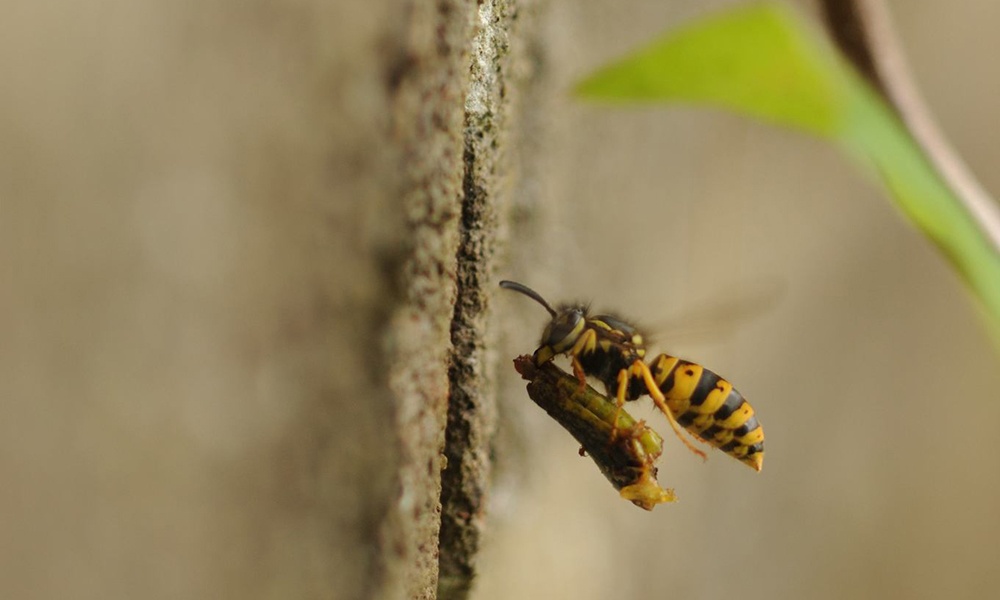 Yellowjacket workers have two jobs: maintain and expand the nest and bring protein-rich meals to the developing larvae inside. Image by Jeremy Barker/CC BY-NC 4.0 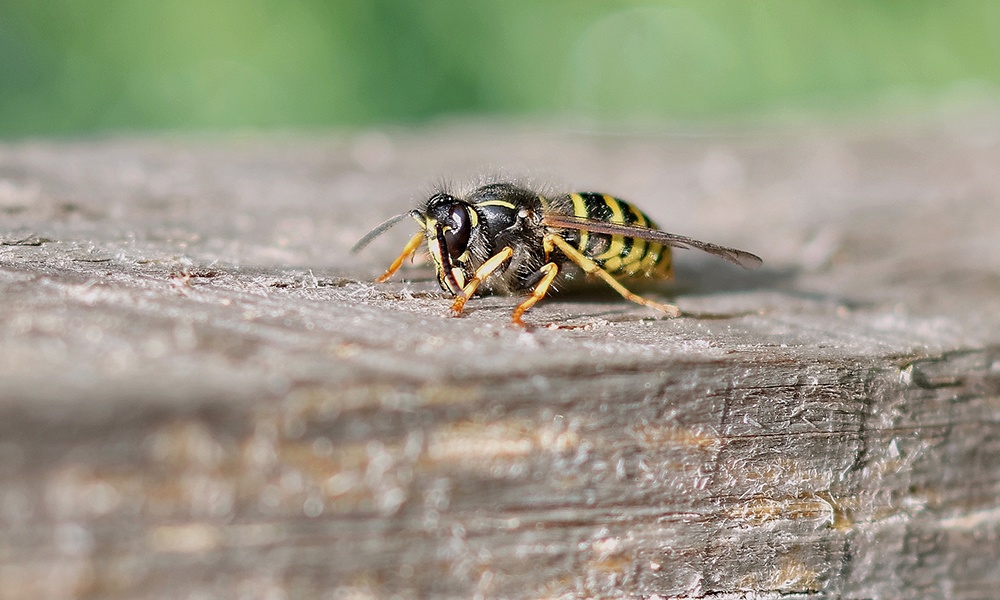 To create their paper nests, yellowjackets mix bits of wood and plant fibers with their saliva to make pulp. Image by Bernard Ruelle/CC BY-NC-ND 2.0 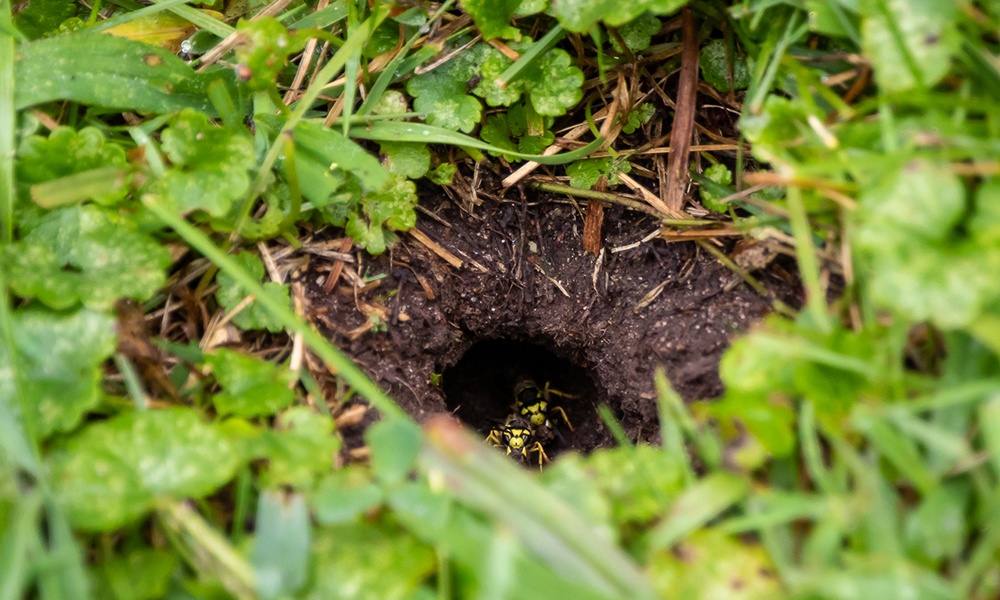 Underground yellowjacket nests can be over 4 feet deep and have intricate tunnels filled with thousands of cells. Image by garymn/CC BY-NC 4.0

New queens spend the winter in logs, piles of leaves and other sheltered areas, emerging in spring to look for places to build their nests. (Yellowjackets rarely reuse old ones.) Eastern yellowjackets typically choose underground sites in covered, out-of-the-way areas that are normally easy to avoid, unless they’re in landscaping, compost piles or frequently mowed areas. German yellowjackets, on the other hand, prefer natural cavities and spaces in man-made structures, making them more likely to be in walls, doorways or sheds.

Inside the nest the queen builds stacked rows of hexagonal paper cells using pulp she makes from her saliva and chewed-up bits of wood. In each cell she lays a single egg. When the first few hatch, she feeds the developing larvae protein-rich caterpillars, earwigs, spiders, worms and carrion (decaying animals). After the first 20 or so workers take flight, her only job will be to remain in the nest and lay eggs until she dies. Her ever-growing family of winged workers, now on a diet of sugars from fruits, flowers and unguarded soda cans, will be responsible for building new cells and feeding the larvae inside. 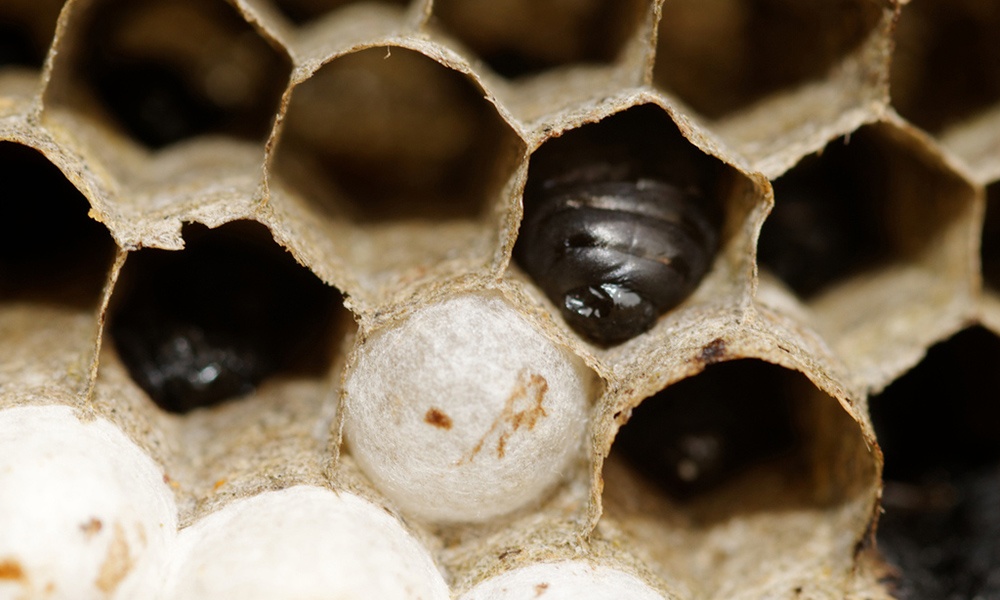 Each sealed cell of a yellowjacket nest contains a single egg. After the eggs hatch, the growing wasps remain in their cells for about 20 days before emerging as winged adults. Image by Thomas Bresson/CC BY 2.0

Most yellowjackets go unnoticed by humans in spring and summer and even provide unintended benefits. One nest can remove nearly 2 pounds of insects in a single summer and protect many gardens and flowerbeds from insatiable caterpillars.

German yellowjackets can be an exception. These highly aggressive wasps fiercely defend their nests, harassing and chasing intruders for long distances, and are likely the ones interrupting picnics or buzzing around trash cans. They’re also the ones most likely to sting (and a yellowjacket can do so multiple times).

Once fall arrives, though, all types of yellowjackets become more conspicuous. Colonies are their largest, and because developing drones and fertile females inside each nest need far more protein than earlier broods, workers are their busiest.

Yellowjackets have been going through this cycle for thousands of years, so the best way to deal with them is to be prepared. Cover sugary drinks and garbage cans, and keep an eye on anything you’ve pulled off the grill. (To a yellowjacket looking for protein to feed the colony’s larvae, a piece of barbeque chicken is just as good as carrion.) And if you see yellowjackets around, don’t assume they’re out to get you. Give them space and they will most likely do the same for you.

In most cases, yellowjacket nests are easy to avoid, but occasionally a queen may set up her home a little too close to yours.

If you’re vigilant in early spring, you may be able to spot and deter queens searching for places to nest. It’s much easier to discourage one wasp from sharing your home than to deal with a colony of hundreds later on.

If you do find a nest, avoid the area until well into winter, when the bulk of the colony has died. A nest in a wall or other heated area with a source of sugar can survive into December.

If you need to remove a nest in a doorway, wall, play set or lawn because it’s causing unwanted confrontations (or someone at home is allergic to stings) it’s best to hire a professional. Simply hitting the entrance with bug spray won’t work. A nest can be 4 feet deep with a labyrinth of cell-filled tunnels and 2,000 to 3,000 workers.

Sealing the entrance also won’t work, especially if the nest is in a wall. Yellowjackets have strong mouthparts called “mandibles” that can easily chew through drywall, so instead of dying off they may simply chew their way into your living room. Image by Roger Smith/CC BY-NC-ND 2.0