For some people, the knowledge that eight different types of bats live in DuPage forest preserves isn’t a comforting thought, but the role bats play in local ecosystems — and the challenges they face in maintaining those roles — may make a lot of people reconsider these fascinating fliers.

Although the big brown bat is the most common, eastern red, hoary, little brown, silver-haired, evening, tri-colored and federally threatened northern long-eared myotis bats have all been recorded in DuPage forest preserves. (The federally endangered Indiana bat was once ID’d here but has not been seen in the county for many years.)

In summer these nocturnal animals spend their days in local woodlands, either in tree cavities or under the loose bark of trees such as shagbark hickories. Males, nonpregnant females, and many pregnant females generally roost individually, but pregnant big brown bats tend to roost in maternity colonies (sometimes in inviting attics to many a homeowner’s dismay).

But just after sunset and throughout the night, bats emerge to forage for insects such as moths, beetles, midges, garden-damaging tomato fruitworms, and even mosquitoes, although contrary to popular belief bats snag few mosquitoes compared to larger, easier-to-catch insects. Their role in keeping insect populations in check is impressive: One female big brown bat with pups, for instance, can eat her weight in insects every night.

To find their small meals bats use acrobatic flying skills coupled with “echolocation.” By sending out high-pitched signals and then listening for the echoes, bats can determine the exact location of their prey. Echolocation allows bats to navigate through the night sky while avoiding what researchers call “clutter,” obstacles such as trees, buildings, and other bats. 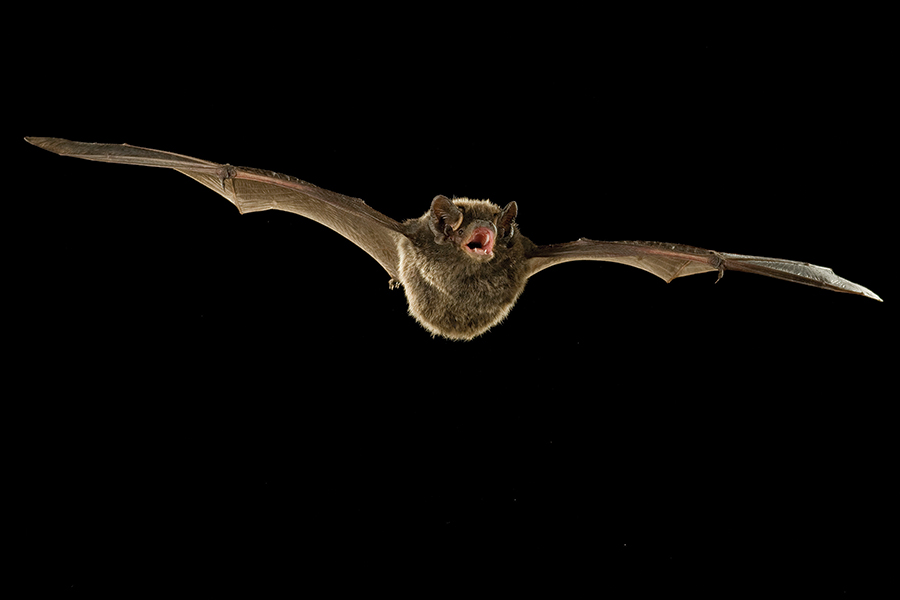 The silver-haired bat was one of a handful of species recently identified at St. James Farm. © Michael Durham 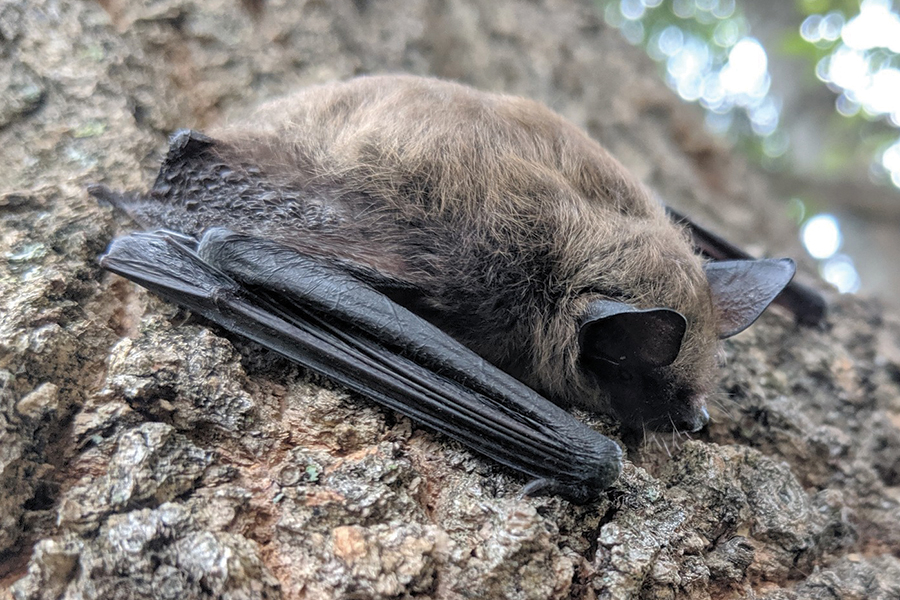 At just 3 inches long, little brown bats are easy to miss when they roost on trees and rocks during the day.  Image by konjuro/CC BY-NC 4.0 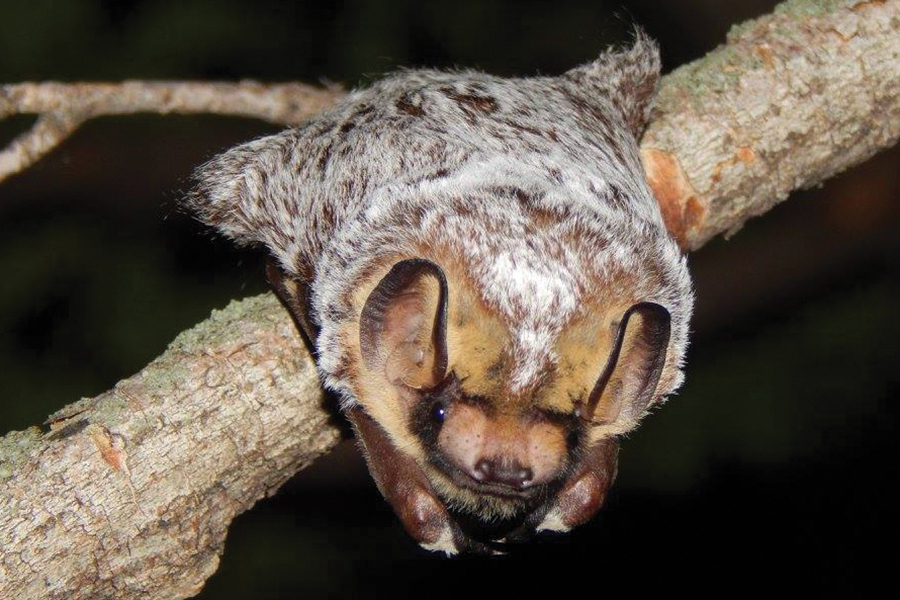 The hoary bat gets its common name from its fur, which looks like it’s tipped with hoarfrost. Image by Eric Hough/CC BY-NC 4.0

If woodlands become too cluttered with nonnative shrubs such as European buckthorn or honeysuckle, bats may start avoiding these areas. To offset these negative effects, the Forest Preserve District not only removes brushy nonnative trees and shrubs but also reintroduces native plants, which can support a greater variety of insects — and insect meals for bats. These combined efforts provide bats with the healthy ecosystems they need to find food and raise their young.

Habitat restoration projects are important, but they’re not the only management tools the Forest Preserve District uses to help local bat populations. Ecologists also monitor forest preserves at night for bats, an activity that can help them determine which species live where, if any endangered or threatened species, such as the northern long-eared myotis, are present, or if particular habitats are in need of restoration.

One survey technique is mist netting. Researchers hang fine nylon nets in the woods, which harmlessly trap any bats that fly by. They can then identify and measure each animal before releasing it.

A more common technique is acoustic monitoring. Ultrasonic microphones detect and record bats’ echolocation calls, which are produced at a higher frequency than the human ear can hear, and transform them into audible sounds. Acoustic monitoring can be passive, where researchers leave a recording device in an area for a night or two, or active, where they walk a designated route with a microphone to record any calls. In either case, this method provides a better idea of which species are in a particular area because it records more than the individuals that end up in a mist net.

At the Forest Preserve District, ecologists use active acoustic monitoring. As they walk and the microphones record calls, computer software — sometimes even special smartphone or tablet apps — mark the GPS coordinates. This can reveal which habitats certain species prefer.

The software can also help identify species. As with bird songs, bat calls are species-specific, and the call structure (the frequency and shape of the call) can reveal which bat made it. But bats vary their calls depending on the environment, and these variations can make one bat sound like another, making identification difficult at times. With only eight species of bats in DuPage, though, a close look at the frequency and shape of calls can narrow down the possibilities. 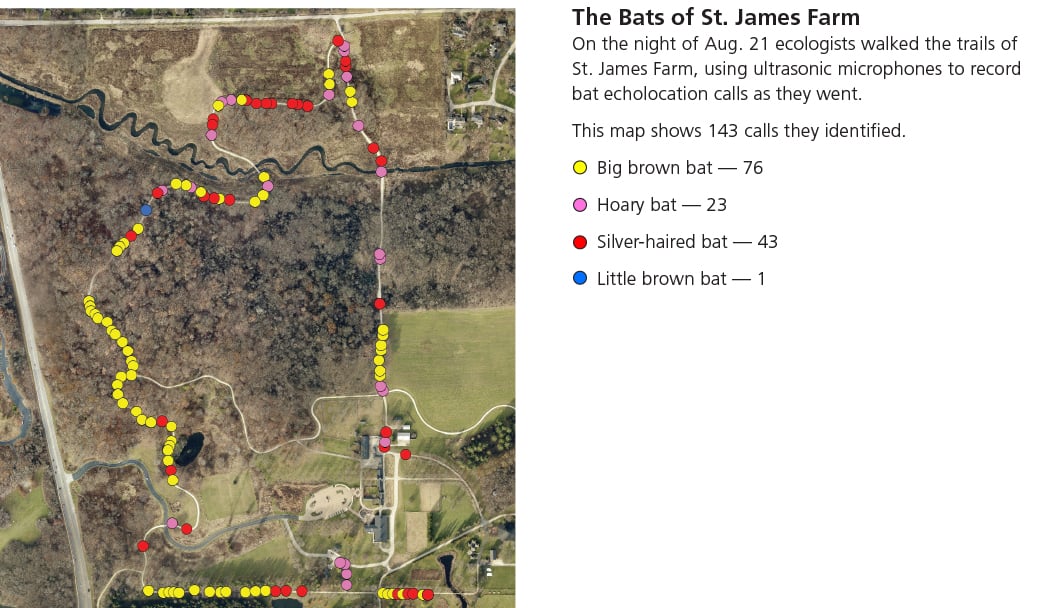 As temperatures start to drop in fall, DuPage bats ready for hibernation, moving to sheltered areas where they can rest undisturbed until spring. A few species even migrate to overwintering caves in Wisconsin or southern Illinois. (It’s these cave environments that contribute to the spread of white-nosed syndrome, a fungus that can have a detrimental effect on bat populations.)

Regardless of one’s personal feelings, the fact is bats play an important role in controlling populations of nighttime insects in DuPage forest preserves. By continuing to restore related habitats and monitor bat populations, the Forest Preserve District can ensure these amazing mammals continue to have protected summer places to call home.

From the President
News & Notes
All About Bats
By the Bark