The water is clear, the sun is out, and I’m walking in the river, bending and peering down to the bottom, scanning each rock closely to find one with guts. Yes, a rock with guts. That’s a friendly term used by eco-nerds like me for a living, breathing, filter-feeding animal commonly called a freshwater mussel.

Native freshwater mussels are “bivalved mollusks.” This means they have two shells protecting a soft inner body. They’re found in most DuPage rivers and streams and are related to the saltwater varieties many people eat. They come in all shapes, sizes, colors, and designs, making it tricky to figure out which is which, and have names such as fatmucket, round pigtoe, plain pocketbook, and slippershell.

They may not be as cute and fuzzy or as noticeable as other wild animals, but freshwater mussels are an important part of the natural history of North America. The United States has the world’s greatest diversity of freshwater mussels, but 213 of the country’s 297 known species are threatened, endangered, or extinct, including half of the 80 species that once lived in Illinois. Statics like these make freshwater mussels the most endangered group of animals in the world. 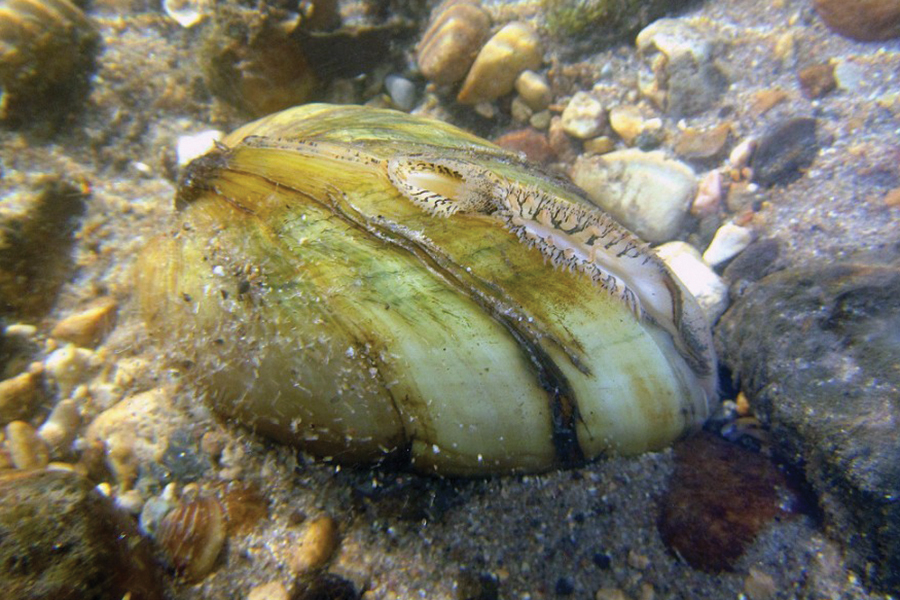 The opening on the right is the mussel’s “incurrent siphon,” which takes in water, oxygen and food. On the left is the “excurrent siphon” that releases waste. Image by m_ignoffo/CC BY-NC 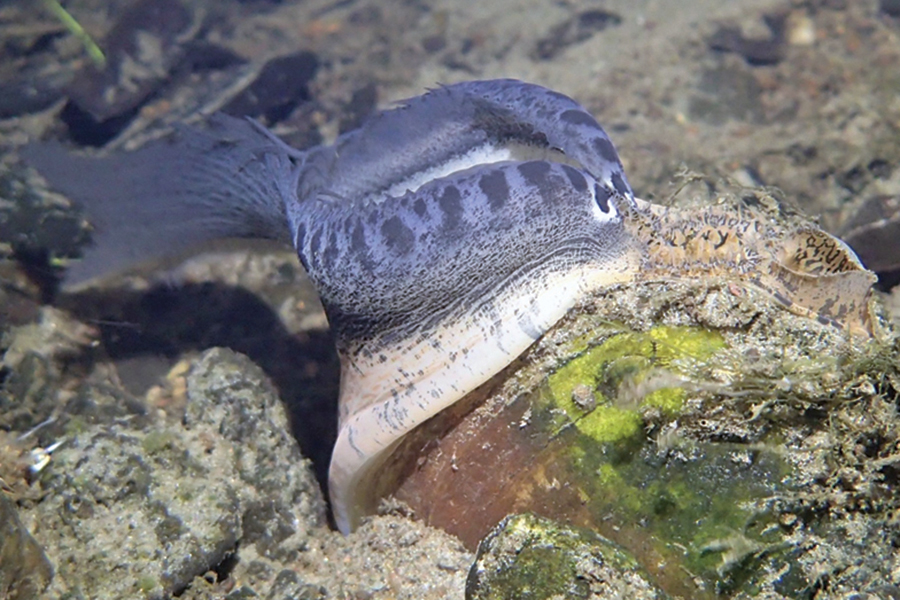 Many female mussels have “lures” they display to attract fish. Mussel larvae need to latch on to certain fish to develop. Image by Philippe Blais/CC BY-NC-ND 4.0 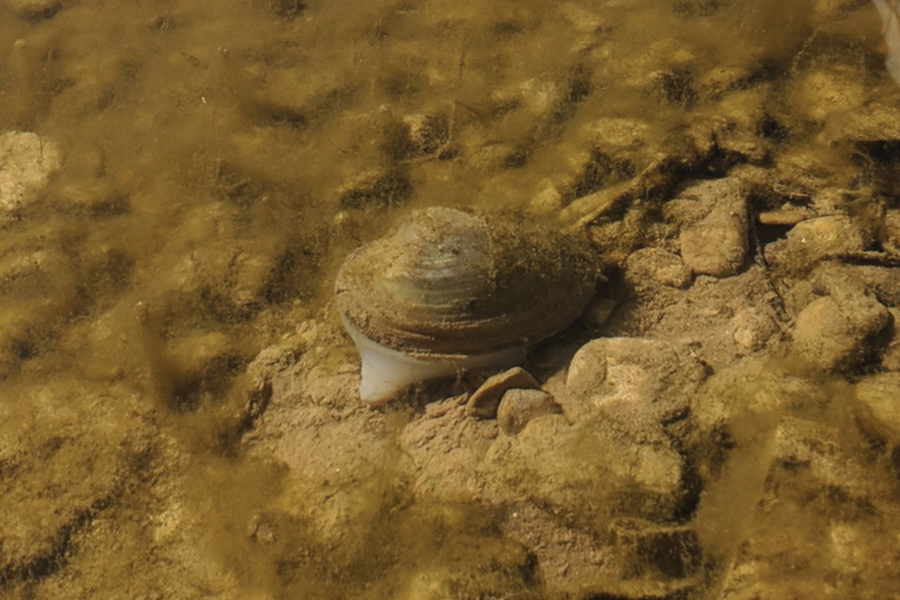 A freshwater mussel has a muscular foot (a white one is shown here), which it uses to move around or burrow into the streambed. Image by Aaron Hoff/CC BY-NC

There’s a lot about freshwater mussels that make them interesting creatures, but one of the most fascinating features is the animal’s complex life cycle. Depending on the species, a female freshwater mussel can produce thousands to millions of larvae, which are called “glochidia.” But these larvae can’t develop unless they briefly attach to specific types of fish. This particular fish is now a “host” to the larvae, while the larvae are considered a parasite to the host fish. It’s a one-way relationship.

To increase the odds the glochidia can find their hosts, female mussels have evolved complex strategies to attract specific fish by mimicking prey items the fish would like to eat. When a fish tries to eat this “prey,” the female releases the glochidia.

Each larva attaches to the gills or fins of the fish, and a cyst forms around it. It remains for two or more weeks until the glochidium develops into a juvenile. At that point, the tiny mussels detach and settle along the streambed, leaving their hosts no worse for the wear. It’s likely not surprising, but because in part to this complex but necessary chain of events only two in 1 million glochidia live to produce glochidia of their own.

These “rocks with guts” may be easy to miss on a paddle down the West Branch DuPage River, but there’s no overlooking the invaluable “ecosystem services” they offer to the greater aquatic environment, either directly or indirectly, by simply doing what they do.

An example of the simplest ecosystem service is the mussel’s shell. Alive or dead, a shell provides habitat for macroinvertebrates, crayfish, fish, algae, moss and other organisms.

The majority of freshwater mussels’ ecosystem services are a little more complex, but some result simply from how they eat. Freshwater mussels are “filter feeders.” They draw food into their soft bodies by pulling in large amounts of water through an “incurrent siphon.” As they do so, they take in bacteria (even E. coli), algae and other organic matter that’s suspended in the water. One mussel can filter more than 6 gallons of water a day in this way, and large groups, or “beds,” of mussels can filter enough to decrease pollutants and increase water clarity across an entire waterway.

Mussels further decrease pollutants by storing elements such as nitrogen, phosphorous and carbon for decades in their soft bodies, lessening the negative effects these nutrient pollutants can have on the environment. (They’re an underwater biological treatment plant that doesn’t cost a thing!) When freshwater mussels deposit the remains of their different meals onto the sediment via an “excurrent siphon,” the mix of digested and undigested waste creates a source of food for other creatures, including other mussels.

Freshwater mussels provide additional ecosystem services when they burrow into the sediment. Each mussel has a large muscular foot, which it uses to move around and secure itself to the riverbed. As it burrows, it releases oxygen trapped between the fine particles and holds sediments together, keeping them from flowing downstream during heavy rains.

But while freshwater mussels work quietly underwater, their numbers are being negatively affected by floods, droughts, and elevated water temperatures triggered by climate change and human activities. These factors are putting this imperiled group of animals in greater jeopardy.

The hope is that efforts like these will allow these remarkable “rocks with guts” to remain in urban river systems, providing such significant ecosystem services simply by working quietly under the water.

From the President
News & Notes
Welcome Back
Rocks With Guts