DuPage forest preserves close one hour after sunset, but that doesn’t mean the animals that call them home call it a night. Many species only become active when the stars come out. But if you step outside your home at night, you may notice there aren’t as many stars as there were when some of us were kids. The culprit? Light pollution, the overabundance of artificial light in the environment, especially excessive or misdirected light, that not only affects the number of stars we see but can also affect how we — and wildlife — function at night.

People are familiar with air pollution such as smog. It’s visible during the day, and we definitely notice it when we take a breath. Light pollution is nothing we can smell or easily see, but like smog it can have a negative effect on our well-being. Like other animals, humans have a “circadian rhythm,” the natural wake-sleep cycle that takes place every 24 hours. According to research cited by the Illinois Coalition for Responsible Outdoor Lighting, overly bright nighttime ambient light can disrupt this rhythm, increasing levels of stress and incidents of disease. Relatively recent studies show that wildlife can experience similarly negative reactions.

Moths are a good example. We know they’re attracted to lights at night, but most people don’t realize moths often stay at artificial light sources well after the sun comes up and the lights go off. This disrupts the insects’ reproductive successes and larval development and makes them easy pickings for predators that learn to frequent these spots.

There aren’t many studies on large wild mammals, but a few on small nocturnal ones suggest that light pollution affects them as well. In one study, mice exposed to the same type of light present on a typical Chicago night showed notable decreases in activity. How this relates to larger mammals in the wild has yet to be studied.

Birds, unfortunately, are perhaps our area’s most noticeable examples of the hazards of light pollution. According to the Chicago Audubon Society, over 250 species of migrating birds move through the area each spring and fall, about 5 million individual birds each season. One study from 2017 showed that artificial light, usually from skyscrapers, has a dramatic effect on some of them. Many birds are attracted to the lights and tend to gather around the source in large groups, wearing themselves out. As they do so, they either collide with the buildings, succumb to exhaustion, or become weakened, vulnerable prey for hungry predators.

This effect was noted as well in New York City near the nighttime memorial for victims of the Sept. 11 attacks. At the site, two beams of light, each with 44 xenon bulbs, rise into the sky to mark where the World Trade Center towers once stood. Now, however, the lights are turned off periodically for about 20 minutes, creating intervals of darkness that allow birds to disperse within minutes and continue their migration journeys. 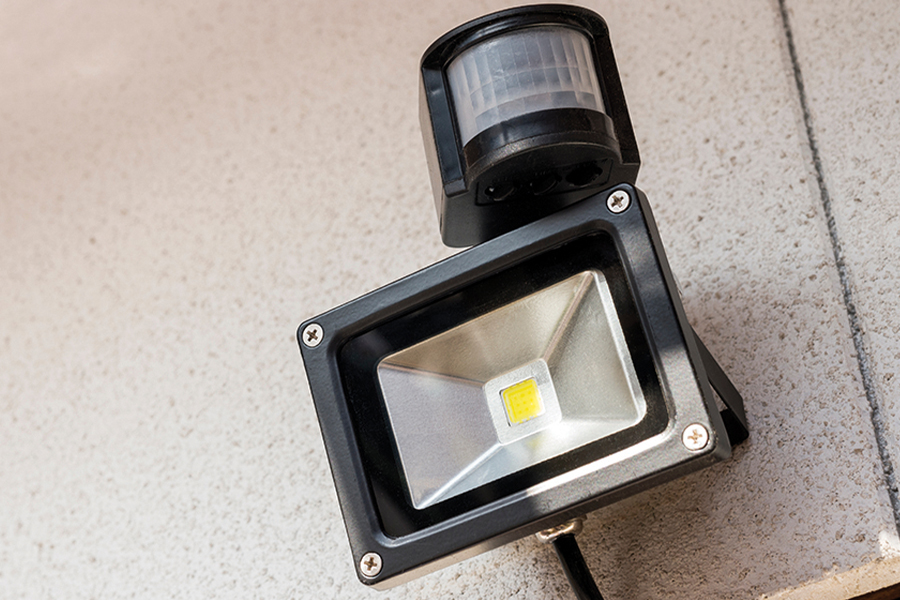 Using exterior lights triggered by sensors not only limits light pollution but can also save you money on your electric bill. Varts/Shutterstock.com 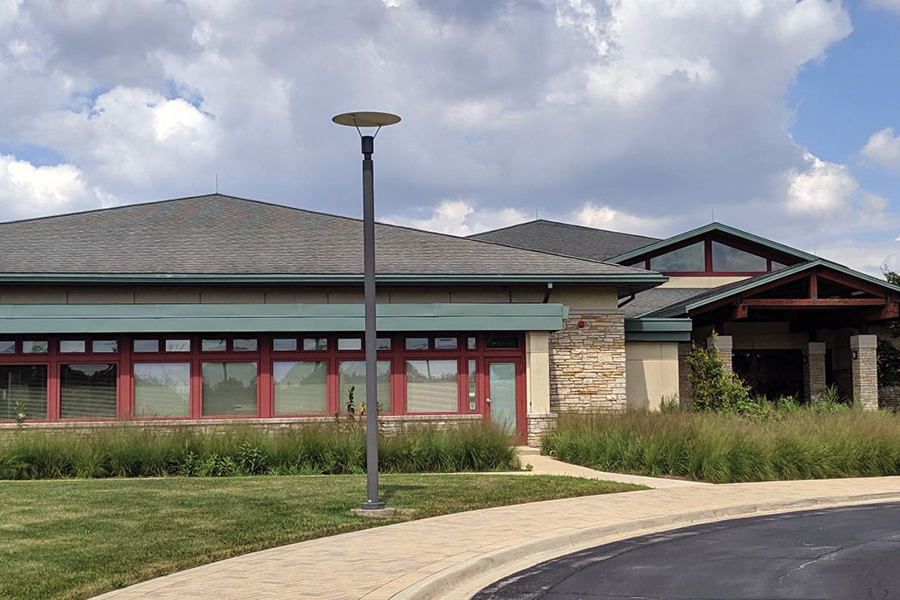 “Dark sky” light fixtures like this one at the Forest Preserve District headquarters office feature a shield on top that directs the light down and prevents it from spreading. 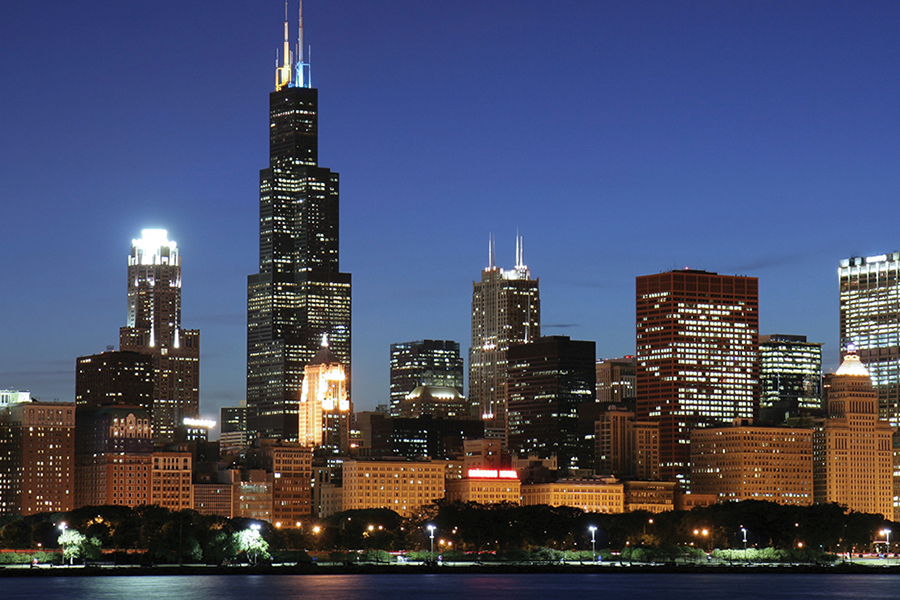 Lights in downtown Chicago can interfere with migrating birds. Many property owners are pledging to turn off, dim or block unneeded lights to reduce this effect. Mike Liu/Shutterstock.com

Back in Chicago, many skyscraper inhabitants participate in the “Lights Out Chicago” program and either turn lights off or draw the blinds between 11 p.m. and sunrise from mid-March to mid-June and again mid-August through mid-November. Still, each season, volunteers from Chicago Bird Collision Monitors collect hundreds of injured birds, many of which end up at the Forest Preserve District’s Willowbrook Wildlife Center. (The center is one of the few in northeastern Illinois that can accept and treat migrating birds.)

But light pollution doesn’t stop at the Chicago city limits. From space, nighttime Chicago and the surrounding suburbs create one large swath of light, which can affect the sky we see and the animals that live in the preserves. Fortunately, you don’t have to own a skyscraper to make a difference. On homes and in parking lots, special outdoor fixtures, many not more costly than traditional ones, focus light directly on the ground and shield it from shining upward. Light bulbs with long wavelengths (those near the red or amber part of the spectrum) minimize wavelengths that attract animals. Timers that shut lights off when not in use and sensors that turn lights on only when something moves by can also help.

You can also do your part by participating in community science projects that track light pollution. By using the “Loss of the Night” smartphone app and comparing which stars you can see at home and on the road, you can help researchers measure and understand the effects of light pollution and highlight areas that can benefit from its reduction.

The more we learn about light pollution, the more we’ll better understand how it affects people and the wild animals that share the landscape with us. As you search for more information about this topic, it’s hope you’ll feel “empowered” and “enlightened.” After all, responsible outdoor lighting not only saves energy and money but can also help “lighten” the load for wildlife and ourselves.

April 5 – 12 is International Dark Sky Week, a celebration of the night sky and raising awareness of light pollution. In addition to stepping outside on a clear night and counting all of the stars and planets overhead, it’s a reason to take time to think about ways to fight light pollution at home.

For instance, does the outside lighting on a house serve a specific safety purpose, such as illuminating a sidewalk or driveway? Does the light have a shield so it falls only where it’s needed (versus spreading overhead)? Is the amount of light appropriate for the task? (Too much light can actually create a glare on certain surfaces.)

If part of your springtime to-do list includes updating exterior fixtures, keep these points in mind and shop in support of dark skies! Image Vasily/Shutterstock.com

From the President
News & Notes
Lighting for Wildlife
Native Shrubs