A Big Year of Birding

As a fan of all things feathered, in 2020 I attempted what birders call a “big year,” seeing as many species as possible in a defined geographical area within a calendar year. I chose to conduct my big year in DuPage forest preserves because they have diverse habitats of varying sizes, are easy to get to and have great trail systems that make exploration easy. On top of that, it’s estimated that over 310 species of birds have been observed in the preserves since 1915, from year-round residents to summer breeding birds, migrants, and vagrant birds not from this area.

A big year is a personal endeavor that any birder can do, if you are willing to put your ID skills and ability to plan to the test. Three important factors will determine what you may see. First, you need to think about what birds to expect at any given time of year. Second, you need to know which habitats support which species. Finally, you need to take into consideration that birding often simply comes down to luck.

My record-breaking big year began at a time of year that can seem bleak and cold, but many birds overwinter in the forest preserves. My favorite winter bird, the northern shrike, spent these months in the thickets at the McKee Marsh area of Blackwell, collecting a larder of prey including small mammals and birds. Northern harriers and short-eared owls spent the winter at Springbrook Prairie, hunting rodents hiding under the snow. However, no winter habitat is more important than unfrozen lakes and rivers, where bald eagles, geese, swans, and dabbling and diving ducks crowd the open water. By the end of the season, it was time to look overhead for migrating sandhill cranes flying in masses, their loud “garoo-garoo” calls often giving them away before they were spotted.

These months receive the county’s largest push of northward-migrating birds. I had an exceptionally “big day” on May 15 finding 109 species, including sparrows, warblers, vireos, flycatchers and thrushes along the wooded edges of Elsen’s Hill at West DuPage Woods. On May 25, I followed reports of a rare Kentucky warbler at Greene Valley, finding the masked singer in minutes by cueing in on his bouncy up-and-down song coming from a canopy of black walnut trees.

This is the heart of the bird-breeding season in DuPage, so it can pay to explore different habitats. On June 20, I teamed up with Forest Preserve District volunteer bird monitors on an extensive survey of different ecosystem units at Pratt’s Wayne Woods. We were thrilled to find fantastic breeding birds such as the ever-boisterous yellow-breasted chat in the preserve’s shrubby areas and the super-secretive least bittern in its wetlands, where we also spotted two exemplary birds: a trumpeter swan that should have migrated from the area three months earlier and a vagrant neotropic cormorant that seemed rather lost. Throughout the summer I enjoyed recurring trips to Pratt’s Wayne Woods to monitor the progress of osprey chicks as they grew from little heads peeking over the nest’s edge into three awkward fledglings that barely fit inside. 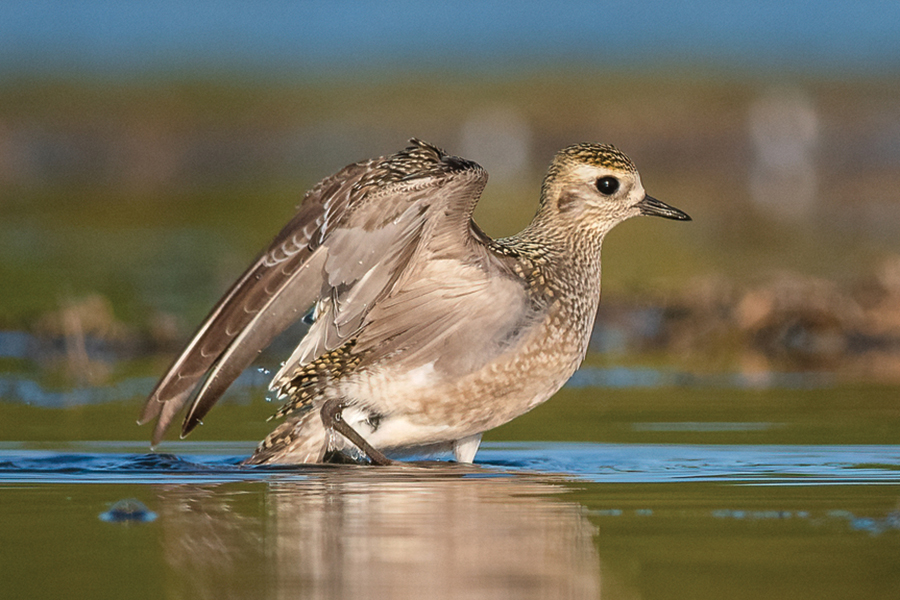 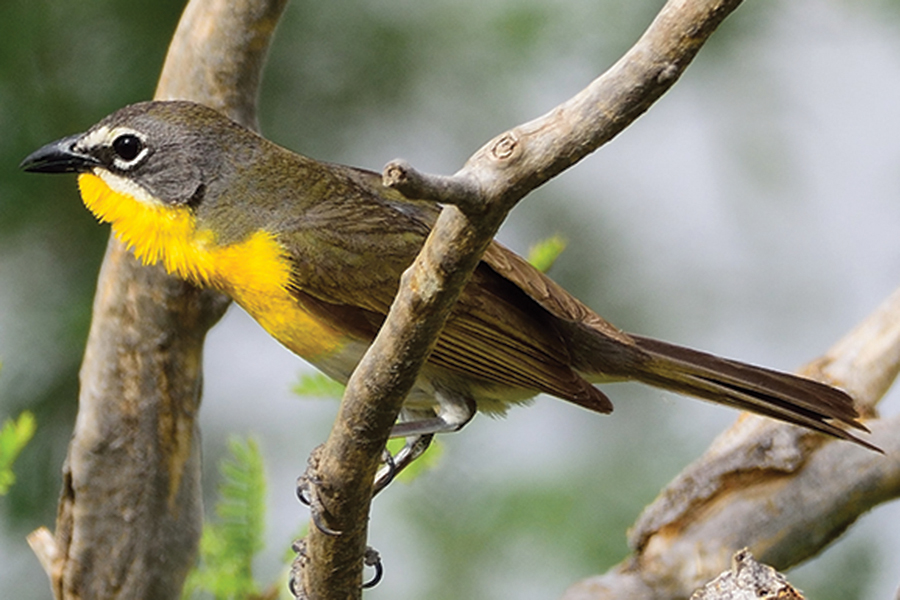 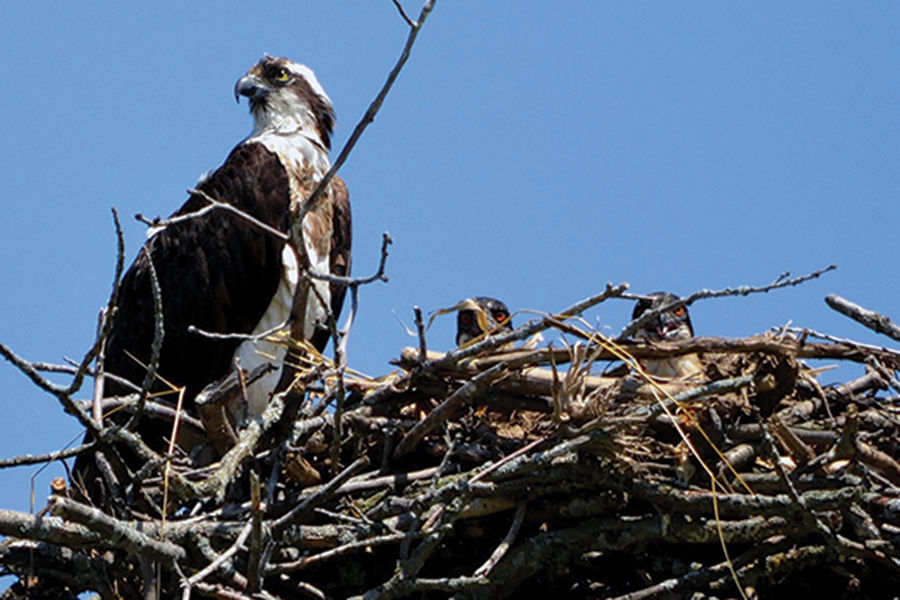 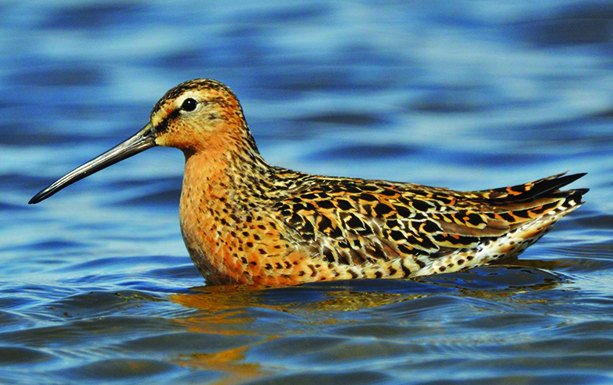 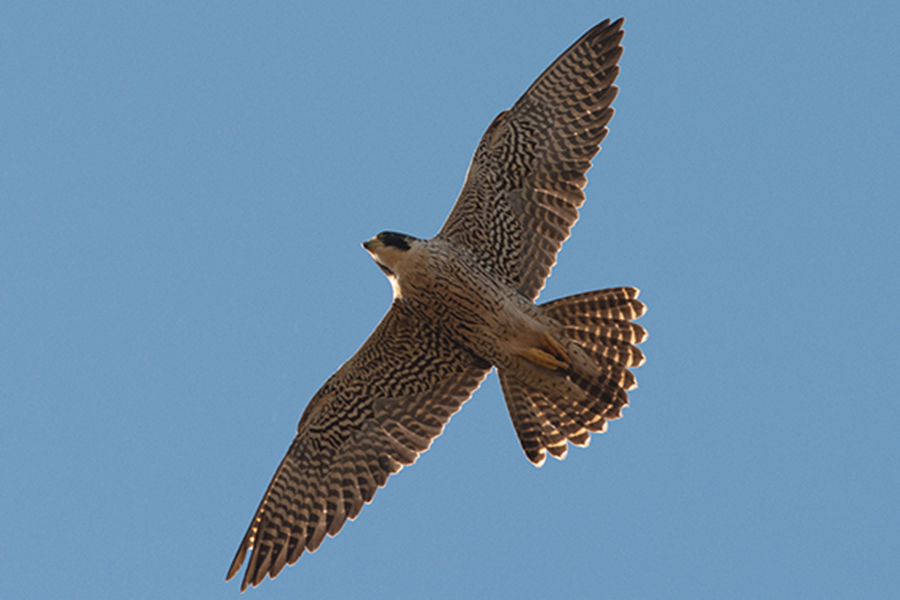 This time of year can be tough for birders. Many breeding birds have finished nesting and have quieted down significantly, but fall migration is just on the cusp. Drought-like conditions in 2020 meant low-water levels throughout many preserves, creating mudflats and stands of emerged cattails. As a result, the Wood Dale reservoir at Salt Creek Marsh in particular was the place to be! An early short-billed dowitcher on July 23 was my first official fall migrant of the year, but was subsequently followed by a black tern, American golden-plovers and numerous other shorebirds that stopped by the reservoir’s mudflats to fuel up on the immense source of invertebrates that were readily available due to low water levels.

This is the peak of the fall migration. Most species that passed through the preserves in April and May returned on their way south joined by their young. In 2020 the raptor migration was particularly exhilarating. On weekends I counted migrating peregrine falcons and sharp-shinned hawks among others from the top of Greene Valley’s scenic overlook. At West Branch, a walk along the sedge and cattail edges offered glimpses at shy LeConte’s and Nelson’s sparrows.

These months are dominated by the search for species missed earlier in the year, such as snow buntings and white-winged scoters, but in 2020 a rare push of boreal birds befell the forest preserves, bringing northern saw-whet owls and a regionally rare evening grosbeak. On Dec. 29 at Deep Quarry Lake at West Branch, I added my record 227th and final species, a pair of pint-sized cackling geese mixed into a Canada goose flock numbering in the thousands.

In 2020 I capitalized on the outdoor time afforded to me and discovered that you don’t need to chase birds to have a big year. You’ll have ample chances to discover the forest preserves’ diversity of birds just by taking frequent excursions. For me, it was often just a matter of being in the right place at the right time, listening patiently and being lucky enough to catch a glimpse in my binoculars.

More Notes on a Big Year

Below are some additional notes from throughout the year from author Glenn Perricone as well as the list of 227 species observed during his big year of birding.

I started the year off with a bang, finding a pileated woodpecker at Fullersburg Woods.
A true shock came on Jan. 15 when I found an out-of-season marsh wren chattering in a wetland at Waterfall Glen that had maintained a trickle of open water. This cold summer bird was not expected in the preserves for another three months!

At Deep Quarry Lake at West Branch and on the DesPlaines River at Waterfall Glen, I particularly enjoyed watching as male common goldeneyes threw their heads back in an arch that touched their scapulars and exclaimed a loud “meep” to impress females.

Throughout late winter, one of the silliest birds to visit DuPage , the American woodcock, danced through the sky over West Chicago Prairie and Greene Valley, in dizzying circles and dives, “peenting” their way into the hearts of females (and my own).

I regularly spotted diving horned and eared grebes as well as common loons on the forest preserves' deeper lakes, the birds stopping for the fish buffet before continuing their migrations north.

My first vagrant bird of the year, a dark-morph Swainson’s hawk at Springbrook Prairie, was particularly special as it represented the 250th species that I had seen in my lifetime in the forest preserves.

I was fortunate to happen across my only Wilson’s phalarope of 2020 at Pratt’s Wayne Woods. I had a brief five-second look at the colorful female sandpiper before she slipped away into cattails. Despite 20 minutes of searching, I was unable to find her again.

A bird of high demand by most birders, the cerulean warbler, was very cooperative at Elsen’s Hill at West DuPage Woods. Usually cerulean warblers are buried in the top-layer canopy; however, one male came down to eye level to grant me fantastically close looks as he picked caterpillars from the underside of sugar maple leaves.

I was surprised to find that the forest preserves' agricultural fields also hosted interesting birds. At Dunham a male vesper sparrow sang from a fence post, and at Kline Creek Farm a horned lark fed on cracked corn in the fields.

At Springbrook Prairie, a pair of northern mockingbirds attracted birders with their complex mimicry of other birds’ songs. Unlike a gray catbird, which runs through its repertoire song by song, or the brown thrasher, which sings all of its mimicked notes in doublets, the northern mockingbird plays his stolen songs on repeat.

At Waterfall Glen the “veer-veer-eee” of the veery thrush and snappy repetitions of the prothonotary warblers filled my ears.

At Pratt’s Wayne Woods and Hawk Hollow, one of my favorite breeding birds, the Bell’s vireo, skulked in the dogwood thickets singing his snappy “bippity-boppity-boo” song.
A highlight for many local birders was a prairie warbler making a county-first breeding attempt at West Chicago Prairie.

Along the oak savanna at Churchill Woods, yellow and black-billed cuckoos as well as monk parakeets were found feasting on cicadas.

While searching for a stilt sandpiper at the Wood Dale/Itasca Reservoir, I was disappointed to watch the shorebirds suddenly rise from the mudflats and take off. This type of behavior generally indicates that a predator is nearby, and sure enough I found a merlin chasing at the heels of the stilt sandpiper and others.

In early October, pine siskins began popping up throughout many forest preserves, a precursor to what was to come. A pair of vagrant red-necked grebes easy to see from the fishing pier on Deep Quarry Lake at West Branch marked the first time the species had been documented in a DuPage forest preserve. At the scenic overlook at Greene Valley, regularly occurring Lapland longspurs provided excitement on days when the winds were not conducive to raptor migration.

At McKee Marsh at Blackwell I met a young birder who became interested in the hobby during the pandemic as a reason to get outside. As she was describing her list of favorite birds we were interrupted by an incredibly rare evening grosbeak flying overhead.