Signs of spring and summer may sound appealing right about now, but winter has a wonderful lineup of nature exclusives you can only see if you step outside this time of year.

Summer’s warblers, great egrets and many American robins may have flown south for winter, but for some birds DuPage forest preserves and backyards are south. The dark-eyed junco is one of them.

Dark-eyed juncos spend summers in northern states and Canada but overwinter in middle and southern states, including Illinois. You’ll see these sparrow-sized slate gray birds with pale beaks looking for food under seed-laden plants or millet-filled feeders. Instead of stepping along the ground they hop from spot to spot, scratching up leaf litter looking for hidden morsels. And if there’s one junco, you’ll likely see several as they like to hang out in groups.

Enjoy watching these gray puffballs now, though, because come spring they’ll be on their way back to their northern breeding grounds.

To create any type of frost you need moist air and a dew point below 32. This means that at 32 degrees moisture — usually water droplets — not only clings to the ground (or plants or other cold surfaces) but also freezes.

Hoarfrost “skips” the water droplet stage, though, going from moisture in the form of humid air (sometimes escaping from steamy unfrozen lakes or streams) directly to the ice crystal stage. This specific chain of events creates intricate levels of ice crystals that some call “frost on steroids.” Often, icy hoarfrost needles on the side of a tree, fence or pole will grow toward the source of the moisture.

If you’re looking for hoarfrost, though, you’ll need to get up early; by midday it’s usually gone. 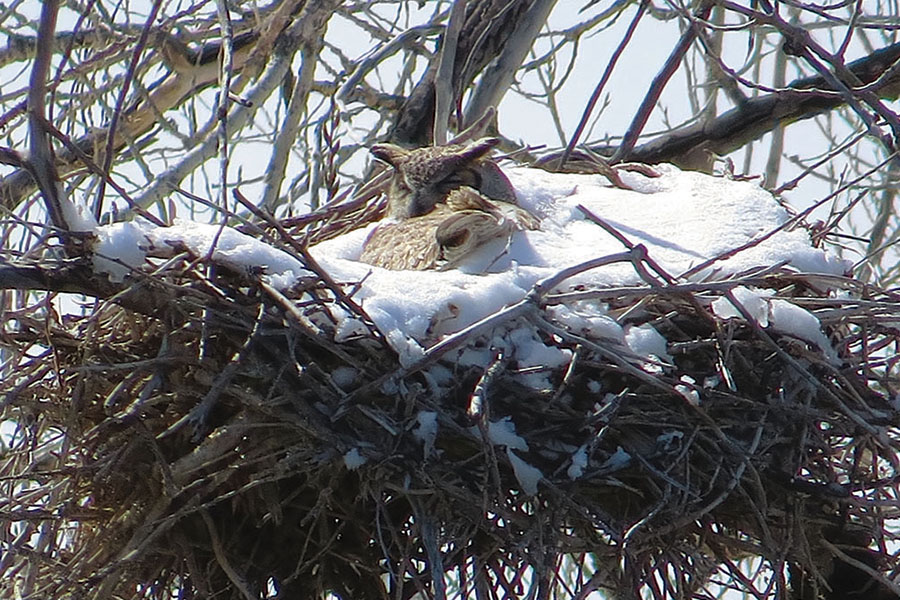 Great horned owls live in the forest preserves year-round, but it may be easier to spot them in leafless winter trees as they’re on the nest.  Image by Jim Kennedy/CC BY 2.0 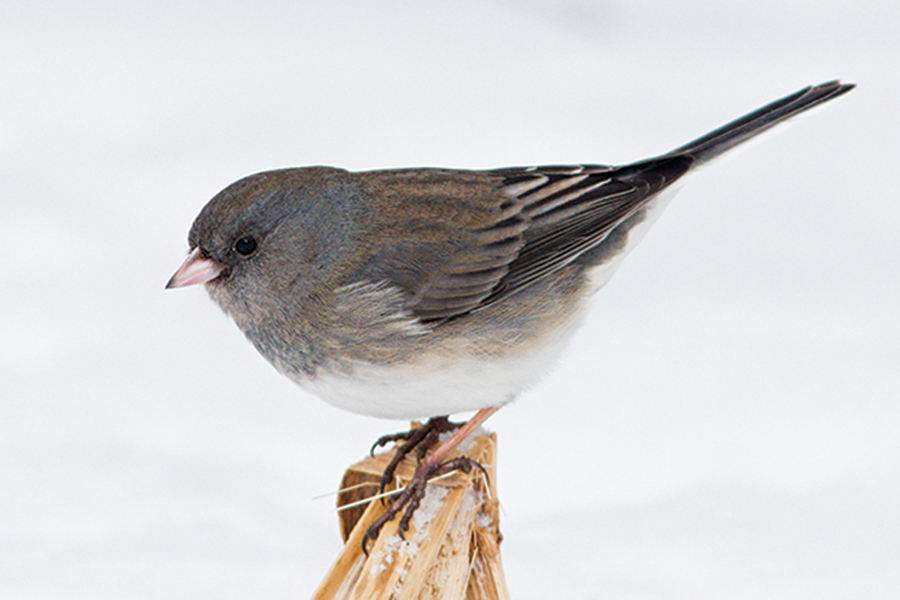 DuPage County is south for dark-eyed juncos, who spend winters in forest preserves and backyards.  Image by Kelly Colgan Azar/CC BY 2.0 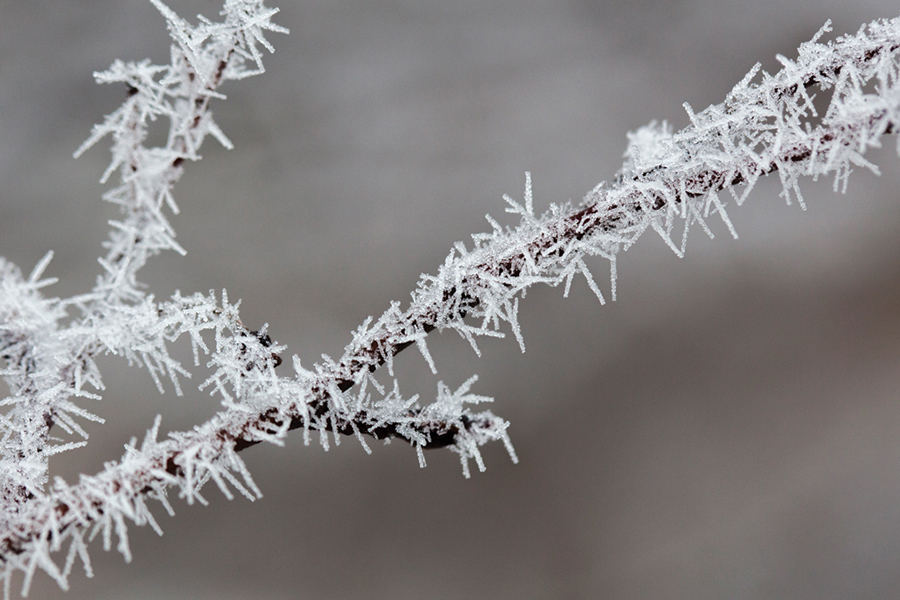 The best chance to see the long-needled layers of hoarfrost is early morning.  Image by Joe Martz/CC BY-NC 2.0 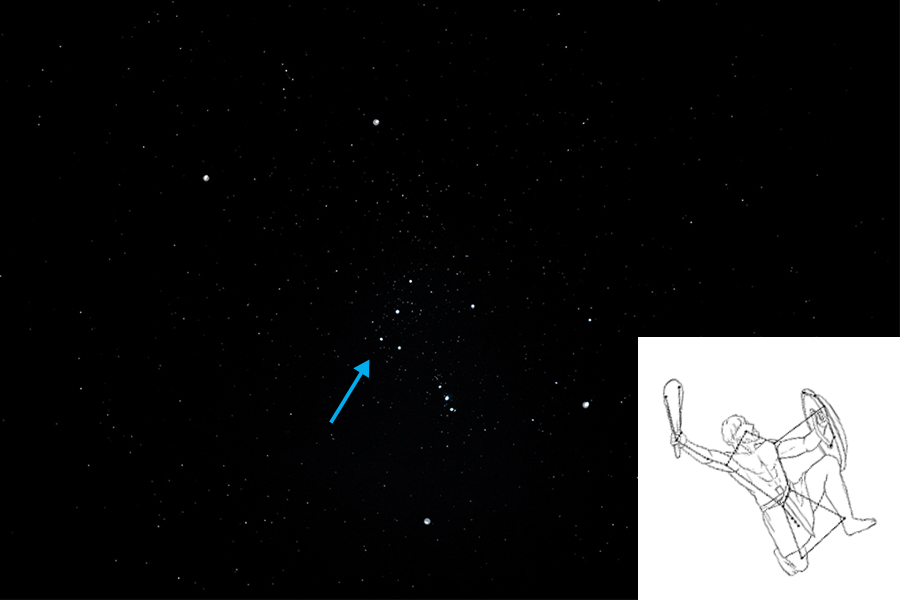 To find Orion in the southern sky, first look for the three stars that make up his belt. Images Den Rozhnovsky and poly2907/Shutterstock.com

Great horned, barred and screech owls all live in DuPage forest preserve woodlands year-round, but in winter the leafless trees make them easier to spot. You might see great-horned owls in particular on the nest or on the move as they teach their young to hunt, so grab your binoculars!

It’s thought that owls nest in January and February because owlets stay close to their parents for a long time compared to other birds. They use this extended time with their parents “wisely,” learning the skills they’ll need to successfully hunt on their own before the cold of the next winter arrives. (A family of barn owls can consume over 3,000 rodents in one nesting season!)

DuPage forest preserve lakes and rivers are popular destinations in warmer weather for their blue flowing waters, but when temps go below freezing they create some solid natural works of art.

As ice forms and shifts on lakes and ponds it can create myriad geometric shapes, which are easy to see when it’s been cold for a while with little snow. (Play it safe and enjoy these patterns from the shoreline, though.)

Rivers and streams create their own designs. When water drips off branches hanging over the shore, icicles begin to form. When flowing, splashing water laps at those icicles, undulating spires of ice take shape. If water levels drop, this action can create tiers of frozen waves. The next time you walk along Salt Creek or either branch of the DuPage River, look for these beautiful natural creations.

The forest preserves are closed at night, but that doesn’t mean you can’t look for this winter constellation in your own backyard. As recognizable as the Big Dipper is in the northern summer sky so is Orion in the south in winter.

The name Orion comes from a mythical hunter, who was shot with an arrow under false pretenses by Diana, the goddess of the hunt. So Orion would never be forgotten, Diana’s father, the Greek god Zeus, placed him up among the stars.

Orion is easy to identify by his belt, which is made up of a band of three stars in the southern sky. (In our night sky, the entire constellation is on a bit of an angle.) North of the belt are two bright stars that make up his shoulders. The eastern star, and the brighter of the two, is called Betelgeuse; the western, Bellatrix. (Now you movie fans know where writers get names for some of their characters!)