The Social Lives of Crows

Mobbing, holding a grudge, funerals, murders. They may sound like popular themes for a crime story, but they’re also a few of the behaviors of the American crow.

American crows are common sights in DuPage forest preserves and backyards. Most people know these large black birds for their diverse diet (nuts, fruits, seeds, insects, bird eggs, small mammals, garbage, carrion) and their distinctive “caw, caw” vocalizations, but many may not know that researchers study crows for their complex social behaviors and intelligence.

Crows are social animals that often live in extended family groups. Young will stay with their parents for up to two years as “helpers” to aid in building nests and rearing and protecting new chicks. As older birds, crows gather in large groups, hanging out at night in roosts containing one or two dozen to thousands of individuals and dispersing during the day to forage for food.

This communal social system is especially seen in crows’ mobbing behavior, a defensive strategy the birds use when a predator is nearby. If a crow discovers a hawk, owl, or other danger in its territory, it will start to harshly caw. This alarm attracts other crows, who join in the calling. (If you ever hear a group of crows cawing like this, be on the lookout for a bird of prey!) Some may even dive bomb the intruder. This effective behavior usually causes the predator to move on.

Crows are also known to carry — and pass on — grudges. In one study, researchers from the University of Washington wore caveman masks and then captured, marked, and released several crows. They then took turns wearing the mask around campus, noting the birds’ responses. Crows that were captured cawed at the person wearing the mask but ignored other people and even other masks. But the crows that were never captured seemed to quickly learn that the caveman mask represented danger as they, too, began to scold and target the person wearing it. The researchers concluded that the captured crows not only held grudges against the person in the caveman mask but also taught other crows that the mask was a danger to avoid.

One of the more interesting behaviors of crows, which is not common in the animal world, is a funeral or wake for a deceased member of the group. Researchers, again from the University of Washington, placed a taxidermied crow outdoors. When a crow discovered the deceased, it would call out, alerting others. As other crows gathered, the group continued to make noise. The researchers theorized that the crows were sending a call out to look for nearby predators or other threats that may have caused the death. The study also revealed that if a predator or human was in the area when the crows gathered, they would scold that individual — even weeks later. 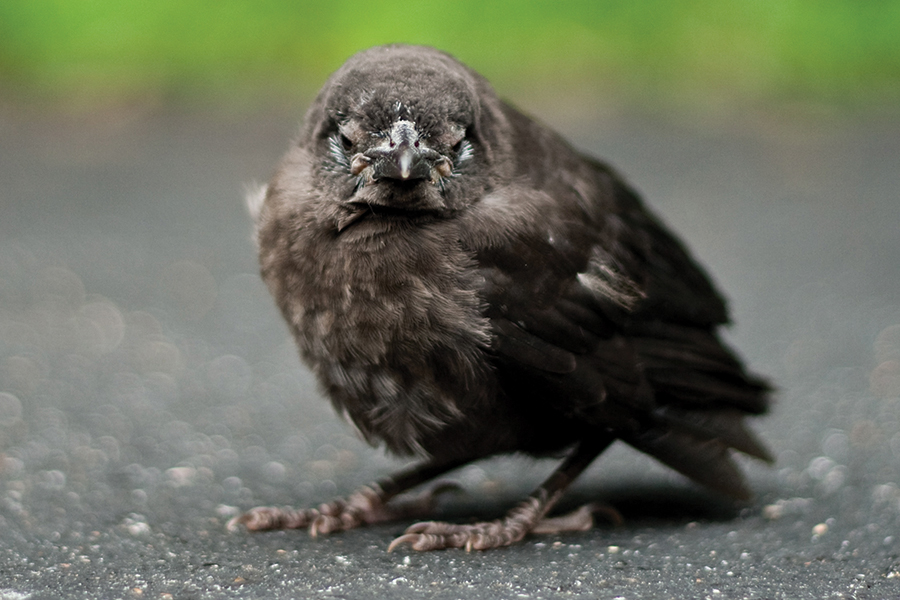 Crows will stay with their parents for up to two years to help build nests and raise younger siblings. Image by daveoratox/CC BY 2.0 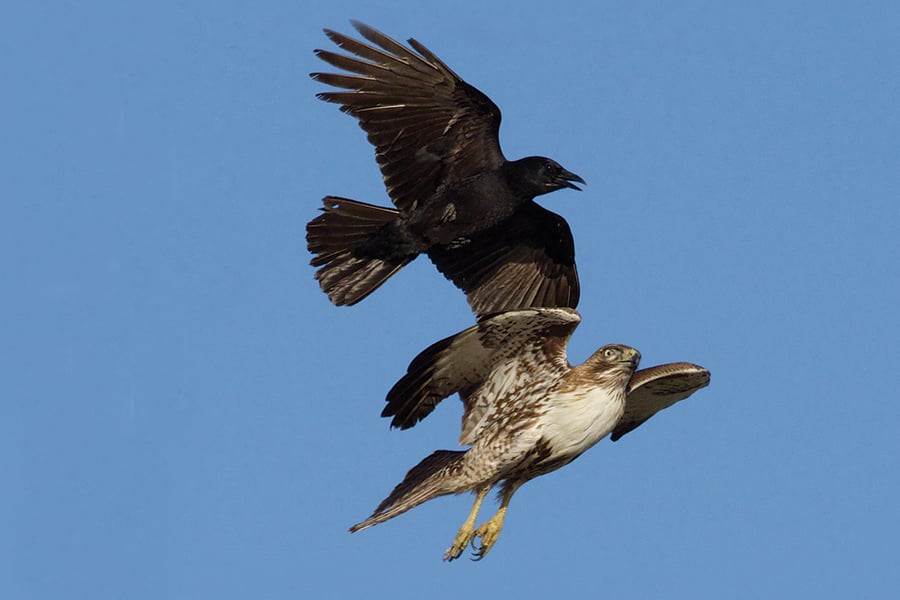 When a predator like a hawk or owl is nearby, crows will call out to attract other crows to mob the invader. Image by Ingrid V. Tayalar/CC BY 2.0 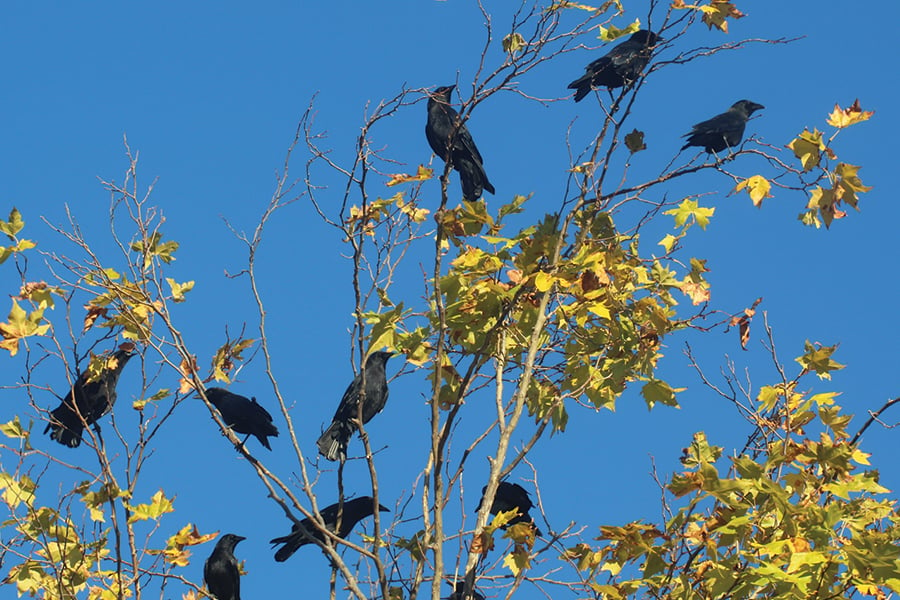 Nonbreeding crows will roost in groups that can consist of thousands of birds. Image by Mark Gunn/CC BY 2.0 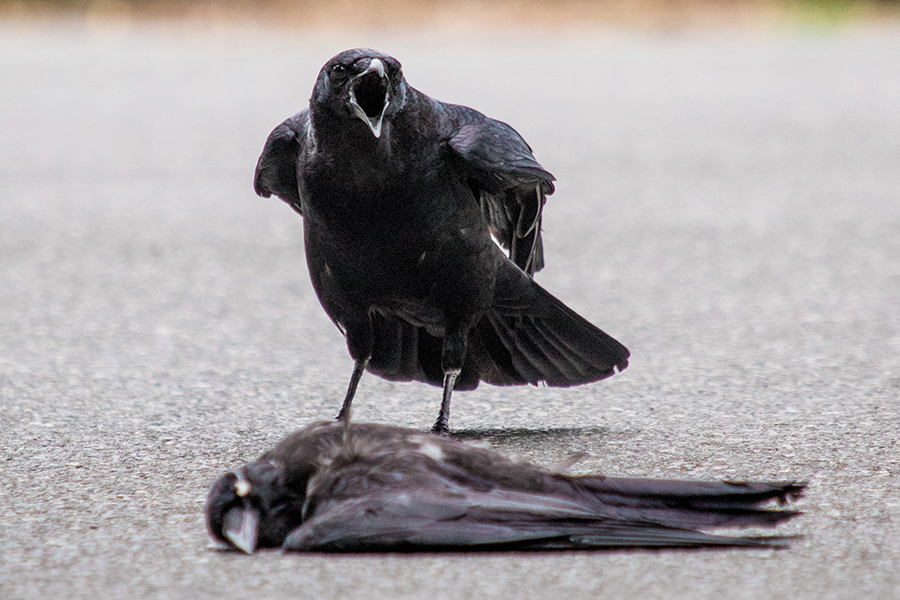 Crows will gather and call around deceased crows, possibly to monitor an area for a responsible predator. Image © Kaeli Swift

Another interesting fact, one based on folklore, is that a group is called a “murder,” although no one knows exactly why. In the 15th century, the English liked to assign collective nouns to groups of animals, often using poetic or colorful names based on perceived characteristics or superstitions. Crows might have received the term “murder” because they were often linked with death, perhaps because of their black plumage or the fact that they ate carrion and were often seen on battlefields. Another possible origin story suggested that a group of crows would act as judge, jury, and executioner against an individual within the group. Regardless of the reason, a “murder of crows” remains a well-known description, although by no means a scientific one.

As for overall intelligence, crows have demonstrated impressive abilities in the ways they work individually and in groups to gather food. Researchers have observed crows using cups to pour water over dry foods to make the meals easier to consume. They’ve seen crows pry slender pieces of wood from fence posts to use as tools to reach into holes to grab insects. Crows will work together to distract river otters before stealing food from the unsuspecting aquatic mammals. And crows have been recorded digging holes to get clams, stealing food from humans and pets, and dropping nuts on hard surfaces to crack open the shells to reach the nuts inside.

Their social and intelligent behaviors make crows well-adapted to living throughout DuPage County. Their close-knit family groups offer an added layer of protection from predators and provide effective means of communicating danger. Their intelligence allows them to observe danger and to pass on what they learn to future generations.