A Bridge to the Past

On a breezy afternoon I stood on the old bridge that spans the East Branch DuPage River at Hidden Lake Forest Preserve, talking to people as they crossed. I met joggers, families with strollers, a birdwatcher from Utah admiring the swallows, two men fishing, and lots of walkers, some who said they’d probably crossed the bridge a hundred times.

Most of the people I talked with guessed the bridge was about 40 years old. One engineer noted it had to be older because of its cast-iron parts. Everyone was surprised to hear it dated back to the late 1800s and was most likely still in its original location.

The story of the bridge begins with a mill and a road.

Between 1837 and 1854 the Barney Sawmill operated along the East Branch DuPage River at today’s Hidden Lake. Locals bought timber in a lot just south of the river and hauled it along a road to the mill to be cut into boards for building.

The road had many names — Barney Mill Road, Stauch Road, Bryant Road — and after the mill closed people continued to use it. In fact, the road was extended north several times, reaching Prospect Park, today’s Glen Ellyn, in the 1870s. Around the same time a bridge was installed over the East Branch DuPage River to carry the road over the water. (Whether the bridge replaced an existing one or whether people previously crossed by traveling through the water is not known.)

The 50-foot-long, 13-foot-wide wrought-iron and wood bridge was manufactured in Cleveland, Ohio, by Zenas King and his newly formed King Iron Bridge Manufacturing Company, which at one point was the largest bridge company in the United States. It probably arrived in Prospect Park in parts via train. From there, horses pulled the pieces south along a dirt road to the installation point, likely the same spot where the bridge sits today.

The structure, a new design at the time, is called a bowstring pony truss bridge. It used less material than stone bridges and lasted longer than wooden ones. Its relatively light weight and standardized design made it easy to transport all over the country.

As more cars and trucks traveled through DuPage, highways started to replace the small roads that connected town to town, and in 1924 plans began for Route 53, which would link the north and south ends of the county. Old atlases show that much of Bryant Road north of Butterfield Road (Route 56) became Route 53. But south of Butterfield Road, the new route deviated from the old road, veering west before crossing the river, possibly to avoid property owned by The Morton Arboretum. Whatever the reason, this turn saved the little bridge, which would have been replaced long ago had Route 53 crossed over that stretch of the East Branch DuPage River. Instead, the bridge became part of a driveway to a private farmhouse. There it stood for another 50 years, surrounded by farm fields and clearly visible to passersby on Route 53.

The Forest Preserve District purchased the bulk of Hidden Lake Forest Preserve in 1977 and 1978 and officially closed the road leading to the bridge in 1983, incorporating the bridge into the forest preserve’s trail system. It repaired the bridge in the 1980s, but 40 years later the structure is again in need of work. Because of the bridge’s sturdy construction and its connection to the county’s history (it’s one of a few remaining of its kind) the District is restoring it rather than replacing it. (Restoring the bridge makes fiscal sense, too, because even though it will cost more than a new bridge, it will last much longer.) Crews will move the bridge off-site for repairs and then reinstall it with new concrete abutments.

Start to finish, the process will take about three months, but once repaired, the bridge will be ready to serve trail users for another 100 years. 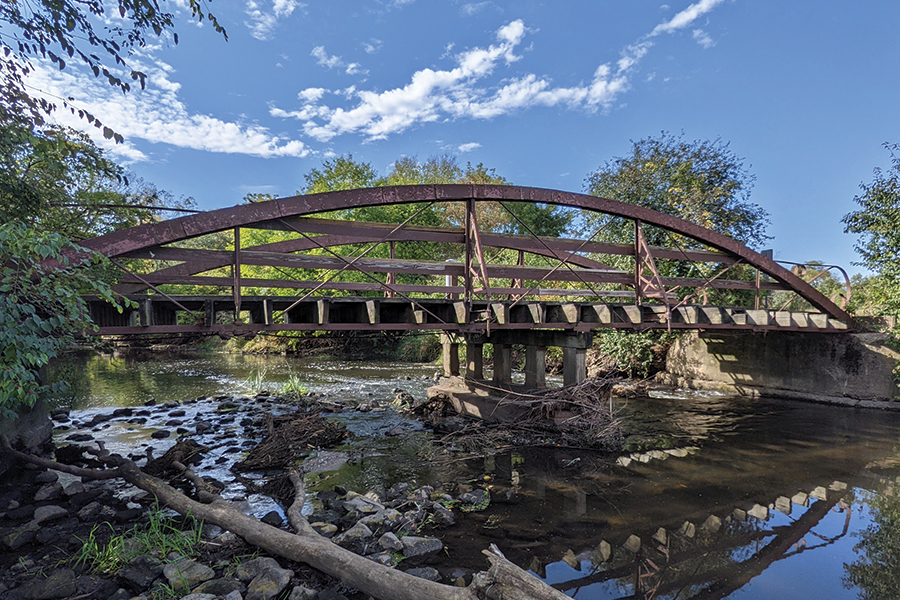 The bowstring pony truss bridge at Hidden Lake dates back to the 1870s. 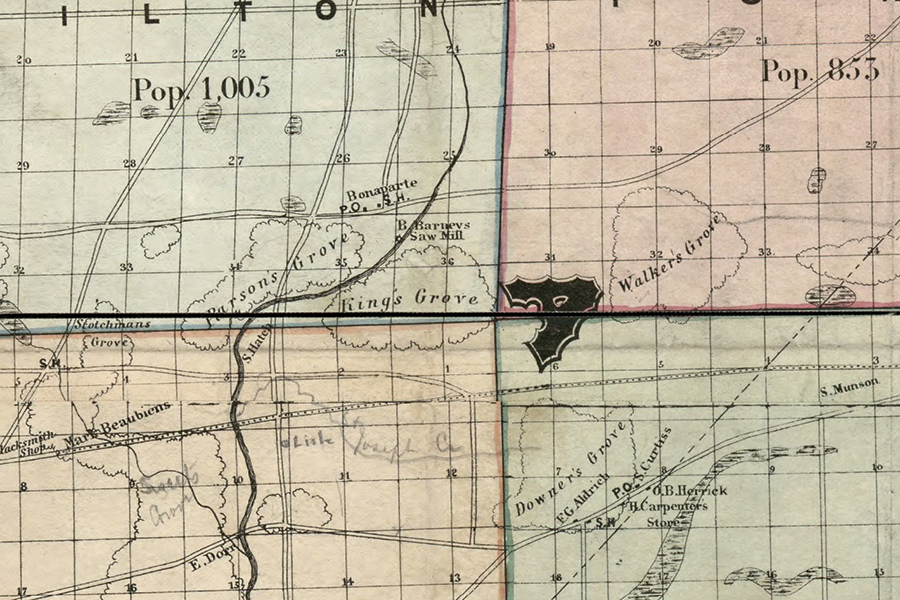 Early maps of DuPage show the location of Barney’s Sawmill along the East Branch DuPage River. 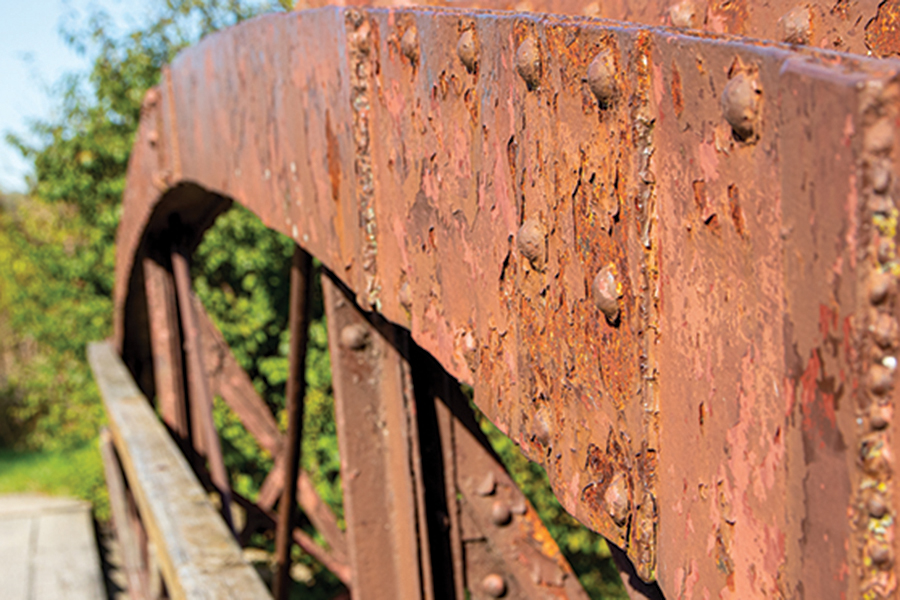 Work on the 1870s bridge will refurbish its original wrought iron.

The decorative railings keep people from walking over the arched top chord, which bends down to meet the wooden decking near each end of the bridge.

What Puts the “Bowstring” in a Bowstring Pony Truss Bridge?

“Bowstring pony truss bridge” may be a mouthful, but each part of the name tells a little about the bridge’s design.

The bridge is supported on either side by a long iron arch, called the “top chord,” that’s supported by a series of vertical posts and diagonal braces, which evenly distribute the load and keep the bridge stable. These posts and braces are what make it a “truss” bridge. Some truss bridges have iron braces that cross over the top, but the sides of a “pony” truss are too short, so it’s open at the top. To some, the arched top chord over the straight bottom chord resembled an archer’s bow, thus giving the term “bowstring” truss. This design only exerts vertical pressure on the concrete abutments on each shore, making a strong stable footing.

Although not a necessary component of a bowstring pony truss bridge, the spiraled wrought-iron bars at each end create decorative railings and prevent people (and at one time, livestock) from stepping over the edge.

The Path to Progress

In spring 2022 the Forest Preserve District will start work on two bridges at Hidden Lake Forest Preserve, the 1870s bridge featured in this article and a second to the northeast. It expects to complete both projects by the end of fall 2022.

Once construction begins, the south parking lot will close to allow for equipment. Part of the trail around Round Meadow Lake will also close, and access to the Eagle Lake Trail and Eagle Lake will not be available, as shown on the map below in yellow. Please be careful near the construction area, and follow all signs and workers’ instructions.