A Helping Hand for Mussels

Freshwater mussels are impressive creatures. They’re tiny water-treatment plants that live in rivers and streams, taking in water and then filtering out pollutants and other particles before passing it back into the waterway. One adult can filter between 6 and 20 gallons of water this way in just one day. But the chance of a juvenile freshwater mussel surviving to adulthood in the wild is slim — less than 1%. In waterways with heavy pollution it can take hundreds of years for small populations to multiply, so it’s no surprise that freshwater mussels are some of the most imperiled animals in the world. So what can the Forest Preserve District do to boost populations of these small creatures that play such a big role in local water quality? One answer is propagation.

Forest Preserve District ecologists like myself have been raising freshwater mussels at the Urban Stream Research Center at Blackwell Forest Preserve since 2012. The process gives us a way to increase populations in a relatively short period of time. The main goal is to raise juveniles to a size that will increase their chances of survival in the wild. Juvenile mussels can be as small as 0.15 millimeter (far too small to see with the naked eye), placing them at risk from aquatic organisms such as hungry flatworms or creatures called “rotifers,” which at only 0.01 millimeter themselves can colonize en masse around juvenile mussels, cutting off their food supply.

Since opening, the research center has propagated over 24,000 mussels, but raising these seemingly simple creatures is not an easy task. The vigorous, intense process is quite involved and can take almost two years depending on the type of mussel. Added to that is the fact that mussel larvae, called “glochidia,” can only successfully develop into juveniles if they first attach to the gills of specific host fish.

To start, ecologists first need to find pregnant, or “gravid,” female mussels. To do so we don waders and slowly move through streams and rivers on our hands and knees, feeling for mussels and gently prying open shells to look for inflated “marsupial gills,” which indicate a mussel is full of glochidia.

The gravid mussels go to the Urban Stream Research Center, where we remove and count the glochidia. The most common extraction technique uses water to flush out the marsupial gills, easily removing large amounts of glochidia without causing significant damage to the adult. We then examine the glochidia under a microscope to make sure they’re fully developed and healthy. A little salt in the observation dish will cause healthy glochidia to quickly snap shut, showing they should be able to successfully latch onto the gills of their host fish when the time comes.

Some glochidia will only attach to the gills of certain species of fish; others are less picky. For common fish such as largemouth bass, smallmouth bass, and yellow perch, the Forest Preserve District can purchase the stock it needs from a hatchery, but for smaller nongame species such as creek chubs, darters, and minnows, it may have to collect the fish from local rivers and streams.

To get glochidia to pair with a host fish, we place both in a small water-filled bucket and lightly stir the contents to ensure the microscopic mussels remain suspended. (If they settle on the bottom they’re less likely to come in contact with a fish’s gills.) During this process, we monitor the health of the fish and ensure an ample amount of glochidia have latched on, at which point we move the fish into a larger tank. There, the mussels harmlessly feed off nutrients from their unsuspecting host.

At just a week old, glochidia can only be seen through the lens of a microscope.

Juvenile freshwater mussels spend the first months of their lives in temperature-controlled pans at the Urban Stream Research Center. 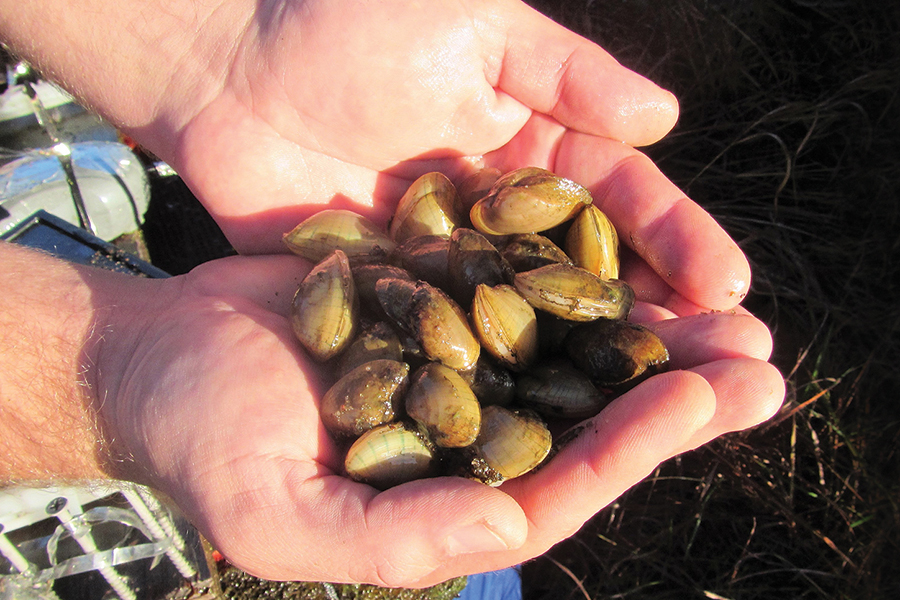 After spending up to two years growing in captivity, these native freshwater mussels are finally large enough to be released into a DuPage river.

After one to three weeks the mussels’ vital organs fully develop, and they detach. They’re now considered day-old juveniles. At this point it’s time to move the mussels into specialized pans, each set up with a sandy bottom, water temperature, flow rate, and algae diet that’s appropriate for the particular species. We measure the mussels on a weekly basis and place them in different containers as they grow. Once they reach 2 to 5 millimeters (no bigger than a pencil eraser), though, they’re ready for a more natural environment.

For this second-to-last step, we number the mussels and move them into floating containers lined with sand, which go in a spring-fed pond that connects to a river. We can still monitor the mussels, but they now have a more natural wild-water diet, one they can’t receive in an artificial setting.

After four to six months, the mussels, now “subadults,” measure anywhere from 30 to 60 millimeters (1 to 2.25 inches) and are ready to move into their forever homes along the streambed. It’s not time for us to say goodbye, though. We’ll continue to check in on them over the years. After all, the goal is for these mussels to start producing offspring of their own. Just one self-sustaining population can contain 100 to 1,000 individuals, and that’s a lot of clean river water!

Raising freshwater mussels is not an easy task, but through propagation the Forest Preserve District hopes to bring populations back to historical numbers one species at a time.