(Completed May 2018) — McDowell Grove Forest Preserve's 70-year-old single-lane entrance bridge was replaced with a new two-lane bridge that accommodates cars and trucks, and a separate elevated trail with a barrier wall for pedestrian and bicycle traffic. 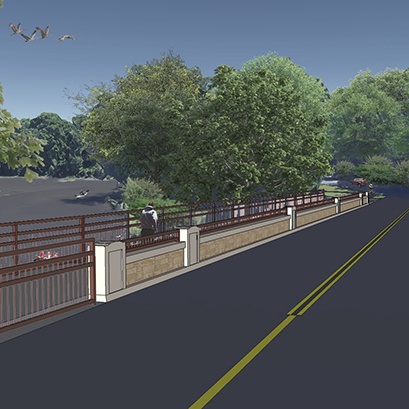 A clear span of the river and higher elevation minimizes debris buildup during floods. The $1.96 million project will also reconfigured the entrance to eliminate a dangerous curve and rerouted the West Branch DuPage River trail to avoid the parking lot.

The entrance is located on the east side of Raymond Drive, approximately 0.35-miles south of Diehl Road, in unincorporated Naperville.

The two-lane entrance road connected to a one-lane vehicular bridge over the West Branch DuPage River, which led to an existing parking lot on the east side of the river. The bridge was originally constructed in the 1940s, with superstructure improvements made over the years.

There were several issues with the old bridge and entrance road:

1. The two-lane entrance road approached the one-lane bridge on a sharp curve on a steep down gradient creating safety concerns during wet or icy conditions.

2. The bridge served as both the primary pedestrian and vehicular access across the river and was considered part of the heavily utilized West Branch Regional Trail. Due to the limited width of the bridge, pedestrian safety was a concern due to the potential for vehicular/pedestrian conflicts.

3. The old bridge was constructed on driven piles within the river which typically caught debris during flood events. The bridge deck elevation was also lower than the base flood elevation, making it difficult for the aging bridge to withstand the structural stresses imposed by flood conditions..

4. The bridge was restricted to a 5-ton weight limit.

The project was completed in May 2018.

The Board of Commissioners has authorized approximately $2,198,000 in bond funds and yearly appropriated construction development funds to construct this project.

In 2006, the District’s Board of Commissioners approved a preliminary engineering contract with Strand Associates to determine potential alternatives for replacement of the bridge. Due to financial constraints, the Board chose to move forward with design engineering for only replacing the deck of the existing bridge, and constructing a new pedestrian bridge to the north along with associated trail improvements. The project was placed on hold shortly thereafter due to anticipated river restoration and dam removal work within the preserve. The river work was officially completed in 2014.

In 2014, an inspection of the bridge found conditions that warranted downgrading the weight limit of the bridge to 5 tons. This weight restriction has significantly impacted access to the preserve for emergency vehicles and District operations. In 2015, the District Board of Commissioners directed executed a contract with WBK Engineering to design a new bridge that will carry two lanes of traffic and a multi-use trail. The bridge was designed to provide a clear span over the river, and correct the alignment of the road as it approaches the bridge from Raymond Drive.