This page provides problem-solving advice and ways to make your yard less attractive to mallards and geese in the first place. 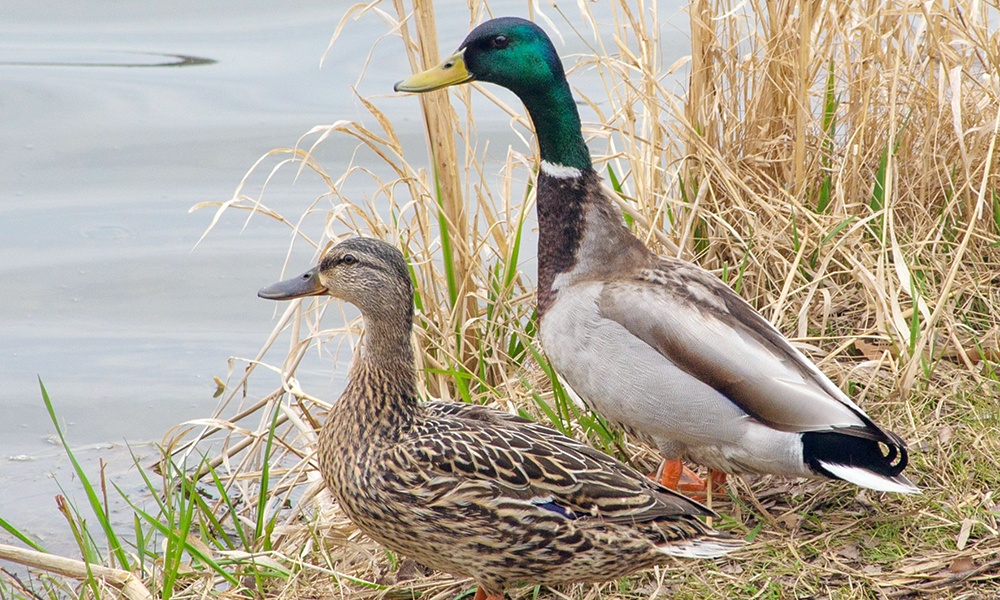 Mallards are the most common ducks in DuPage County. They live in wetlands, rivers and lakes as well as retention basins, swimming pools and garden ponds. They may migrate in fall but can stay north year-round if mild temperatures keep waters open.

Mallards may pair up in the fall, but once the female starts to incubate her eggs in spring, the male leaves, often to mate with another. Females usually have one brood a year, which they raise on their own. They lead their ducklings to water 24 hours after the last eggs hatch — a trip that can be over a mile long. Young can fly 40 to 60 days later.

Adult mallards molt in early spring and late summer, although during the latter they lose all of their feathers in a short time, which leaves them unable to fly — and vulnerable to predators — for three to four weeks.

Mallards are “dabbling” ducks. Instead of diving for food, they feed by dipping their bills in the water, sometimes upending their entire bodies in the process. They eat a variety of aquatic sedges, grasses, seeds, roots and tubers but will forage on land for grasses and agricultural seeds and grains. Their diet also includes insects, snails, worms, fish and crustaceans, especially during the breeding season.

In summer, high temperatures and low, stagnant waters in ponds and lakes can create ideal breeding grounds for the bacterium that causes botulism. Isolated outbreaks of botulism among mallards may occur, and affected ducks often die within 48 hours.

Manicured lawns, retention ponds, business campuses and golf courses provide excellent habitat for Canada geese. They often build nests on the ground near water, especially in low-lying areas prone to flooding, but also nest on rocky ledges, above muskrat or beaver lodges, or in parking lots. Like mallards, they can migrate in fall but will stay year-round if waters remain open.

Canada geese mate for life and usually arrive at breeding grounds as mated pairs. Eggs hatch in May, and goslings are able to leave the nest within 24 hours. They remain with their parents until fall, following them to their wintering grounds. Depending on the time of year, a flock can consist of families or groups of families.

From late June to late July, Canada geese lose their flight feathers and their ability to fly. They can be aggressive during this time if they feel their nests or young are threatened and may hiss at or chase people who get too close.

Canada geese will dabble in shallow water for food, but they’re primarily ground feeders, preferring grasses and sedges in spring and summer, berries, seeds and agricultural grains in fall and winter, and lawns year-round.

If You Find a Baby Duck or Goose

Young waterfowl can get separated from their families on their way to water after they hatch. Here are some steps you can take if you find a stray.

It may seem harmless, but feeding ducks and geese can create serious problems.

The food that people feed ducks and geese is less nutritious than food found in the wild. It can also cause serious digestive problems and make the animals more susceptible to diseases such as avian cholera, duck plague and avian botulism, which can kill large numbers of waterfowl.

How to Make Your Yard Less Attractive


What You Should Never Do

All native birds, a category that includes mallards and Canada geese, are protected by the 1918 Migratory Bird Treaty Act. It is illegal to:

Ducks and geese are not public health concerns, but always use gloves or a shovel to clean up droppings.

If you find a wild animal that looks injured or orphaned, leave it alone and call the Forest Preserve District's Willowbrook Wildlife Center at 630-942-6200. Recordings offer general advice when the center is closed.

Banner image by Becky Matsubara/CC BY 2.0