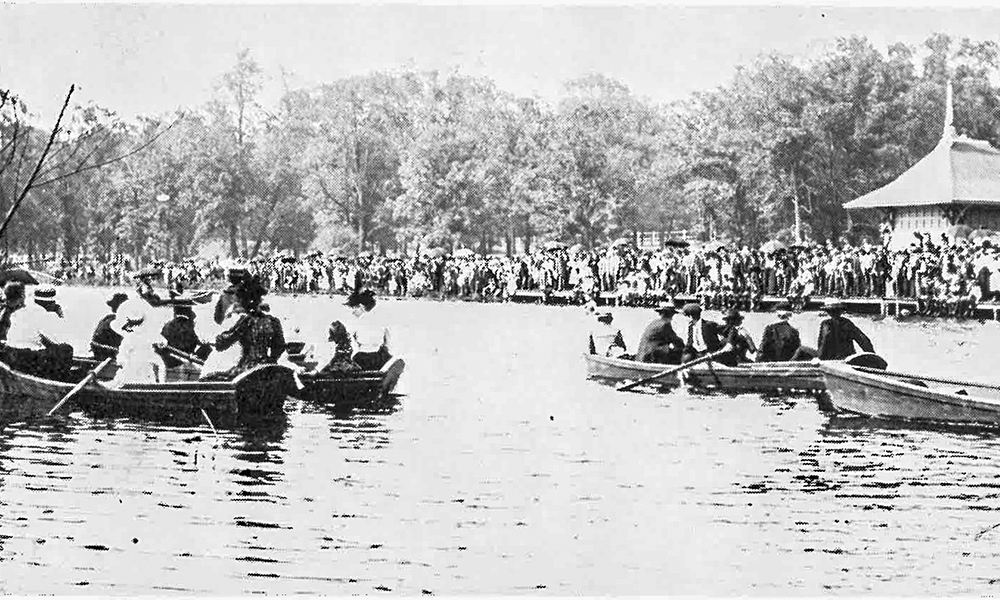 Railroads were crucial to the development of the United States, sparking economic and industrial expansion all around them and carrying people and goods across the country. One of the area’s most famous railroads also played an important part in the development of DuPage County’s park system.

Railroads played an integral role in shaping American culture. Individual businesses, entire industries, and even many cities owe their existence to the fact they’re located near a train line. 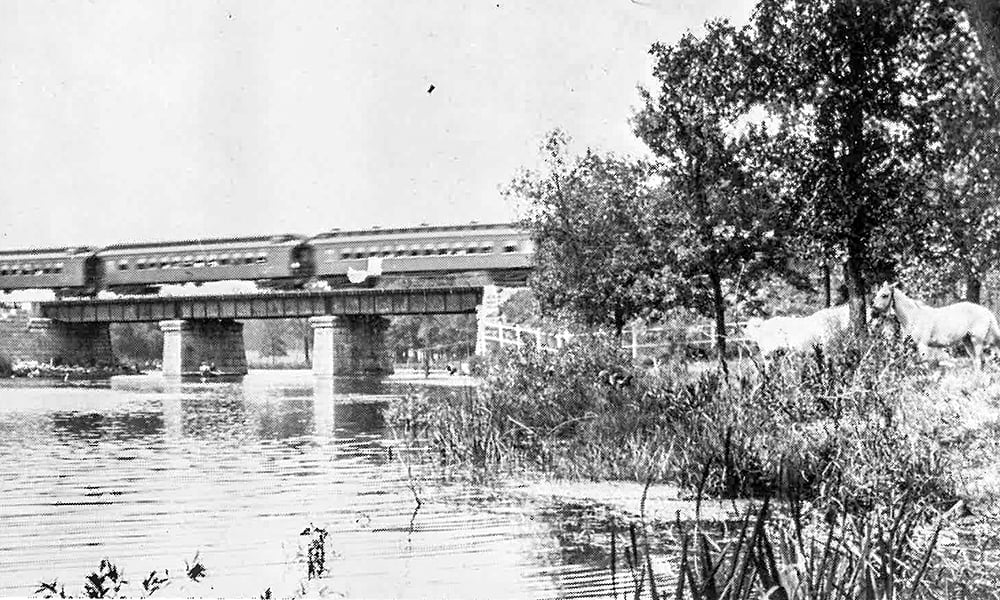 A train crosses the bridge over the West Branch DuPage River at Burlington Park in Naperville. Photo courtesy of Naper Settlement

The Chicago, Burlington and Quincy

Following the Civil War, few railroads were more influential than the Chicago, Burlington and Quincy. Begun as a regional spur in 1848, by 1880 the CB&Q was expanding rapidly westward, mirroring and driving the growth of the nation.

When it came to long-distance travel in the 19th century, railroads had no equal. The automobile was just being invented and would not compete with trains for decades to come. But around 1880 — probably in an effort to spur local travel on their line — the CB&Q employed a novel strategy: they built a destination.

The railroad line purchased 60 acres of land on the outskirts of Naperville, 29 miles west of Chicago. This land was developed into Burlington Park, which the company immodestly touted as “the most desirable and complete place for recreation in the vicinity of Chicago.” This was at a time Chicago already boasted such landmarks as Lincoln Park with its zoo; and Humboldt, Garfield and Douglas Parks, each with its own conservatory. 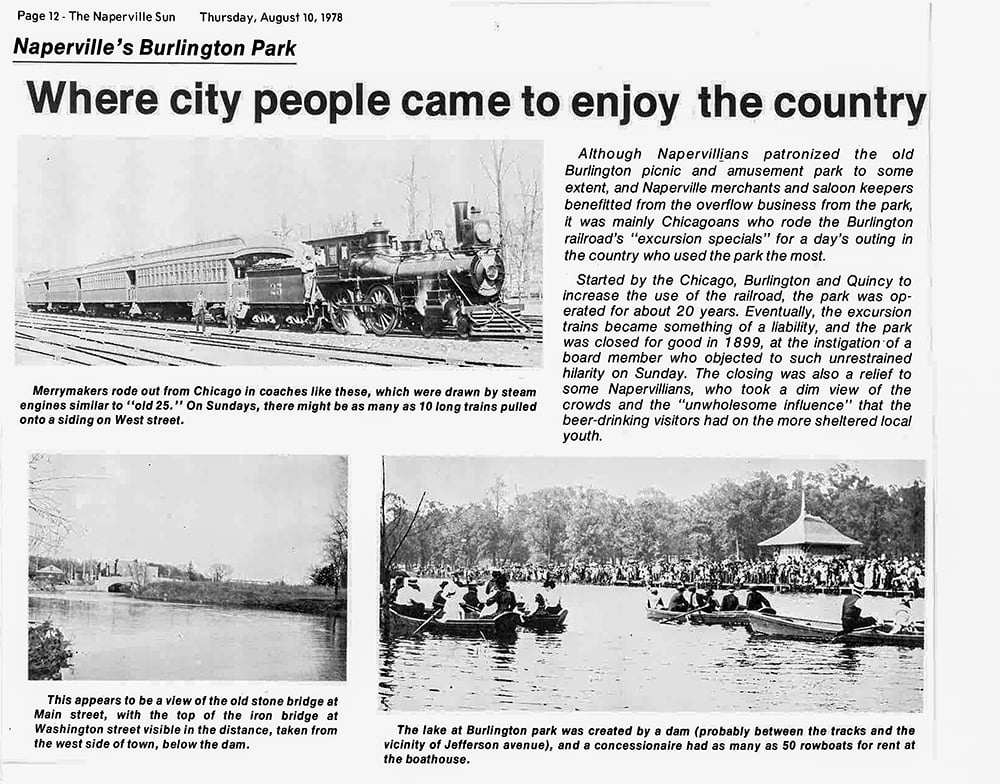 Though the land was set in a beautiful natural setting amid 36 wooded acres along the West Branch DuPage River, Burlington Park was built around the notion of fun.

It included a shooting gallery, a “gambling area” with carnival-style games like ring-a-cane; a bowling alley, dance hall, photo gallery and large merry-go-round; and a grandstand for watching baseball games and races.

The river was dammed to create a lagoon for boating and swimming. Besides entertainment, the park included an eating pavilion, refreshment stand and beer bar. Chicagoans, who seemed to be the primary patrons of the park, paid 50 cents for a roundtrip ticket, 25 cents for kids. The fare included admission to the park, and entry to the music hall and eating pavilion.

The idea was an enormous success. Ten thousand people routinely crowded into the park on weekends; on holidays or for scheduled events that number easily doubled. The trains would line up on a siding near West Street in Naperville, and wagons delivering food, drink and other supplies would roll in.

Not So Popular with Locals

While some local businesses supported the operation, many Naperville residents took a dim view of Burlington Park. With so much to do inside the park, few of the park’s patrons ventured into Naperville to spend their money, and those who did were viewed with suspicion. Locals tried to keep their kids away from the park, seeing the boisterous city folk as a bad influence. Of course, for many kids this prohibition only increased the allure. 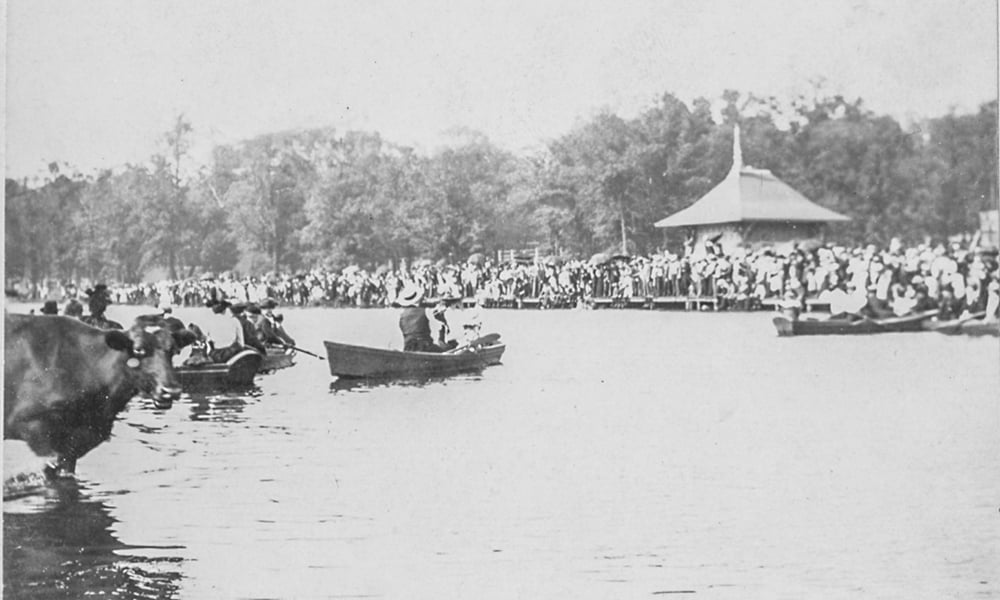 Visitors enjoying a boat ride while a cow wades in the water at Burlington Park in its heyday. Photo courtesy of Naper Settlement

All Good Things Must Come to an End

In  1899, the Burlington unexpectedly closed the park. The most likely reason is liability. Crowds would sweep out of the park at the end of the day, en route to board return trains. With people crowding the platform, sometimes sitting along the edge, the chance of serious accidents and ensuing lawsuits may have scared the railroad into getting out while they were still ahead.

A New Owner and New Direction for the Land

In 1922, the Forest Preserve District of DuPage County purchased Burlington Park for $852.50. Today, 100 years later, all evidence of the amusement park is gone. All that remains are the tracks that still run along the north edge of the park and over the bridge, carrying freight trains and Metra riders on their way to and from Chicago. 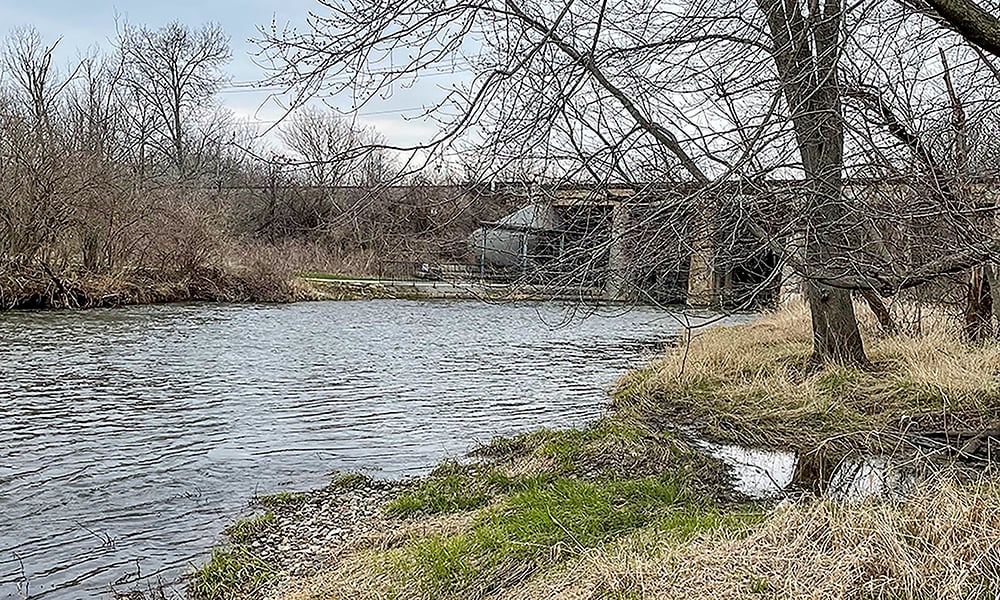 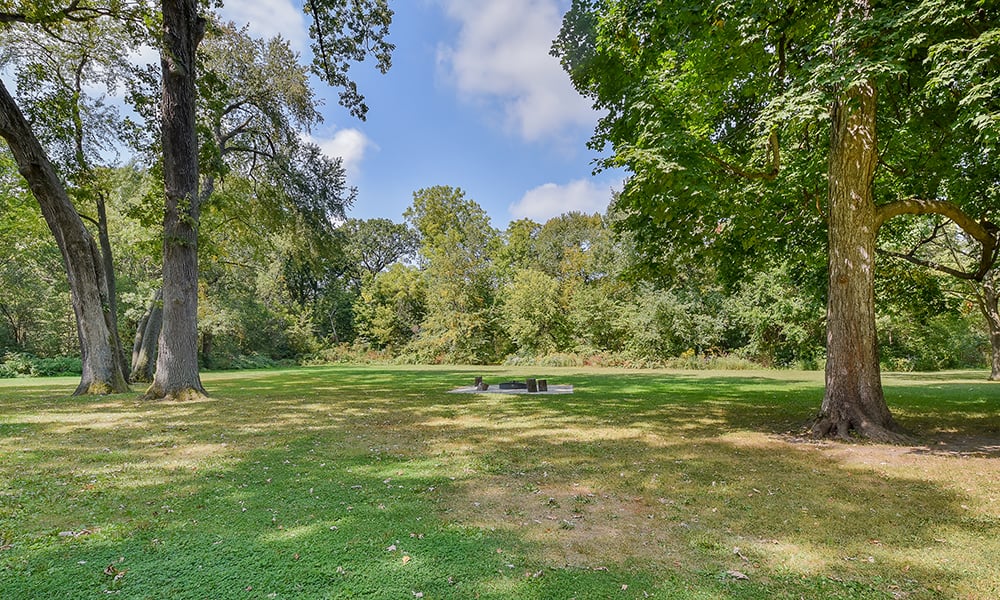 Burlington Park no longer resembles an amusement park created by a railroad company to increase ridership, but that rumbling train line is a big part of how the preserve was created. 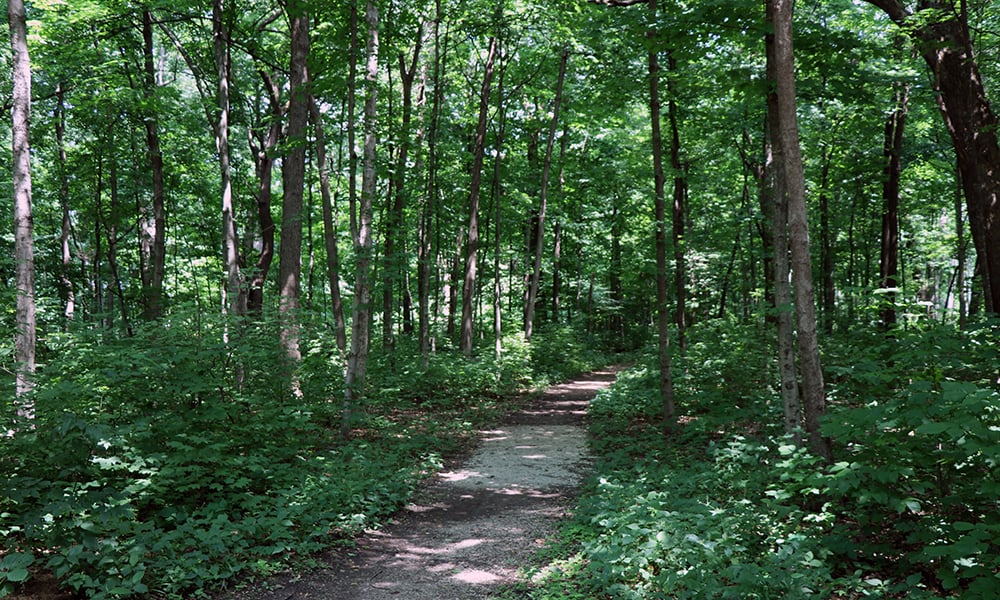 Burlington Park as it looks today. 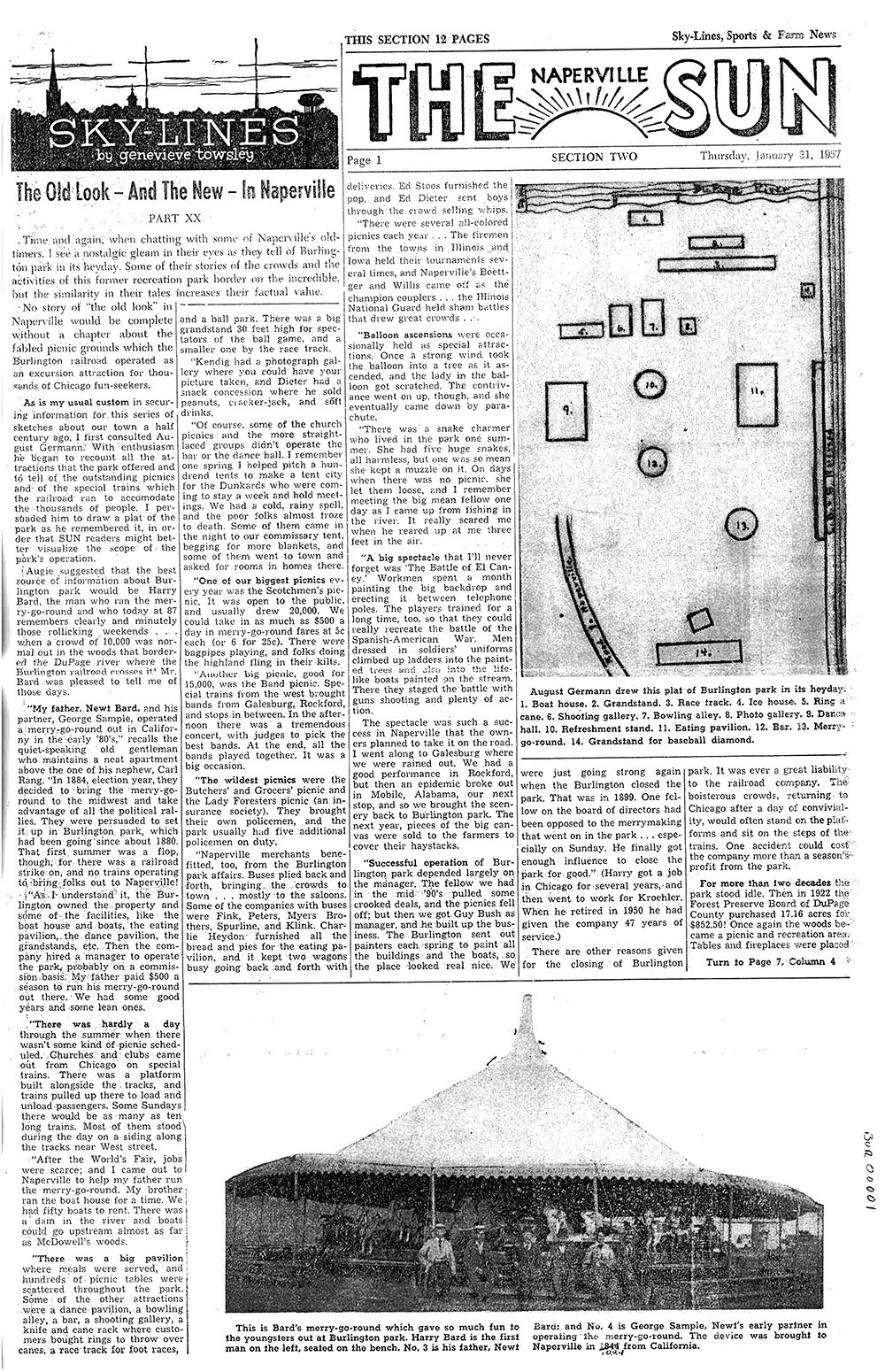 A Naperville Sun newspaper article from Jan. 31, 1957. View the PDF of the article.

Dennis Buck is a heritage interpreter and the collections coordinator at Mayslake Peabody Estate in Oak Brook. He enjoys teaching about American and Illinois histories, with nearly 25 years of experience. He earned a B.S. in history and an M.A. in history museum studies. He is a Certified Heritage Interpreter.