This page provides problem-solving advice and ways to make your yard less attractive to coyotes in the first place.

For more information on these mammals, including what they eat and where they live in the forest preserves, visit the main coyotes and foxes page. 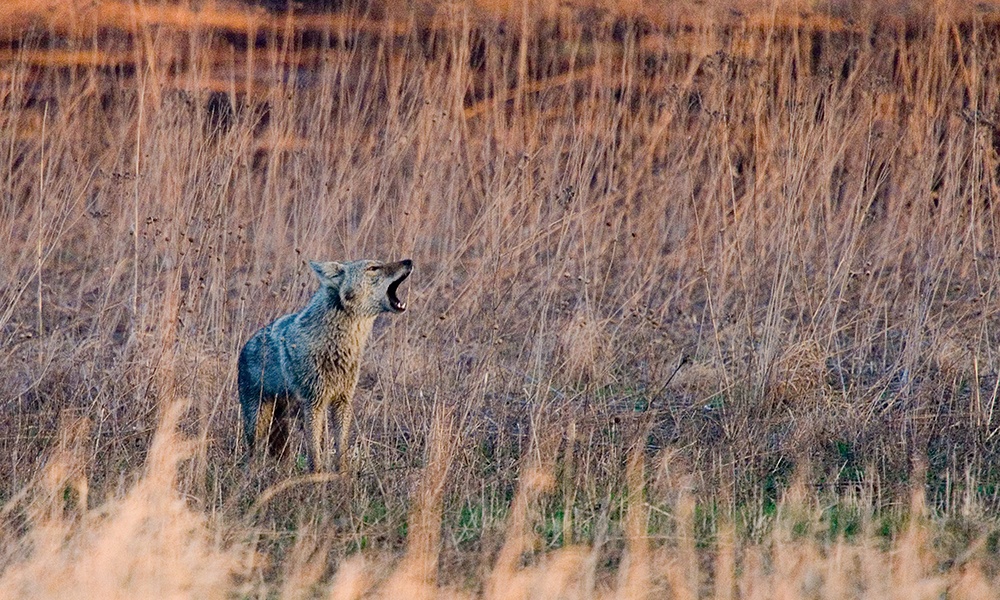 Survival for coyotes is difficult, and some may instinctively see domestic dogs — their close canine cousins — as competitors or threats. This can be especially true if a dog is small (smaller dogs tend to be more aggressive toward larger canines) or if a dog’s yard falls within a coyote’s territory. In some cases, a coyote may try to eliminate a perceived threat or take a smaller dog as prey.

There have been reports of coyotes chasing or attacking dogs during the day, even dogs on leashes, but these confrontations are uncommon and are often initiated by the dog and not the coyote. Still, it’s wise to take a few precautions.

Like domestic dogs, coyotes test their limits around humans and learn something from each exchange. Unless they associate people with negative experiences, such as loud noises, they can become comfortable walking down streets or sidewalks or near schools, basking in yards or parks, and shortening the distance between themselves and humans.

A bold coyote does not necessarily mean an aggressive coyote, but a coyote that maintains its fear of humans will be less likely to cause problems

How to Make Your Yard Less Attractive

Coyotes avoid people when they can, but loss of habitat makes it difficult. You can prevent problems in your yard, though, by removing two main attractants: food and shelter.

What You Should Never Do

Coyotes are not a public health concern. Domestic dogs bite nearly 900 people in DuPage County each year, but the county does not have one documented case of a coyote biting a human. In other parts of the country, most cases occurred after people were feeding the animals.

Coyotes may carry rabies, but there have not been any recent reports in DuPage County. Although transmissions are uncommon, they may also carry distemper, sarcoptic mange, heartworm and other canine diseases, so always keep pets’ vaccinations current.

If you find a wild animal that looks injured or orphaned, leave it alone and call the Forest Preserve District's Willowbrook Wildlife Center at 630-942-6200. Recordings offer general advice when the center is closed.