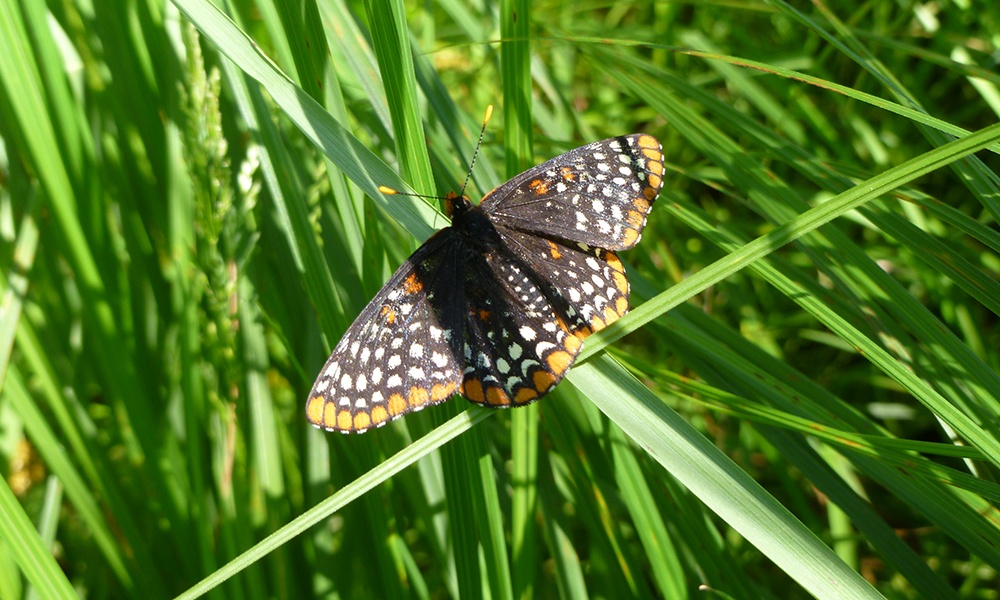 Working on the Baltimore Checkerspot Butterfly Project over the past several years has been a fascinating experience for me.

Baltimore checkerspots are rare in the Chicago region, and a few years back the Peggy Notebaert Nature Museum requested to use an existing DuPage County forest preserve population as a source stock for breeding and introducing the insect in other county preserves. In response, the Forest Preserve District started its checkerspot project in 2010, but as with any project of this caliber, we needed to first locate wild populations large enough to tolerate the removal of the individuals needed for breeding without affecting the greater population. To do that, we’ve been using the “mark-and-recapture” method of estimating populations. 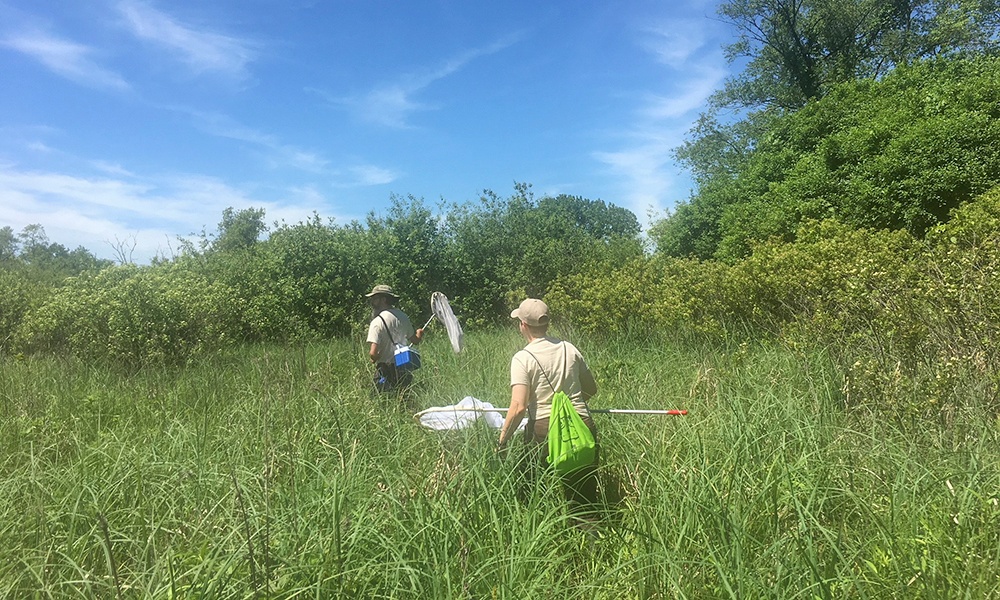 During a sampling session, which usually lasts about an hour, ecologists capture Baltimore checkerspots using cloth mesh insect nets. At the end of the session, they identify the sex of each insect and use a fine-tipped indelible marker to delicately mark the wings of each butterfly with a code that corresponds to a unique number, a technique that scientists Paul Ehrlich and Susan Davidson published in 1960. This system allows ecologists to identify previously sampled Baltimore checkerspots during future sessions. (Studies have shown that the process does not harm the butterflies or shorten their lifespans.) Ecologists use mathematical formulas to compare the number of marked and unmarked butterflies from a sampling session to estimate the size of the population. Long-term data from these samplings can help them determine if populations are increasing, declining or staying the same.

This project has also included the restoration of Baltimore checkerspot habitat so these rare insects don’t blink out of existence. By removing thick overgrown brush and knocking back invasive plants with prescription fires, ecologists are opening up habitat where butterflies can find important native “host” plants: specific plants adult butterflies visit to deposit their eggs and developing caterpillars rely on for food. Turtlehead (Chelone glabra), fen betony (Pedicularis lanceolata) and mullein foxglove (Seymeria macrophylla) are all Baltimore checkerspot host plants, so their presence or absence can directly affect populations of this butterfly. In this sense, Baltimore checkerspots have benefited from the Forest Preserve District’s deer management program because abnormally large populations of deer can devour excessive amounts of these vital plants. But ecologists may still need to propagate these plants as well as the butterflies for the best success. 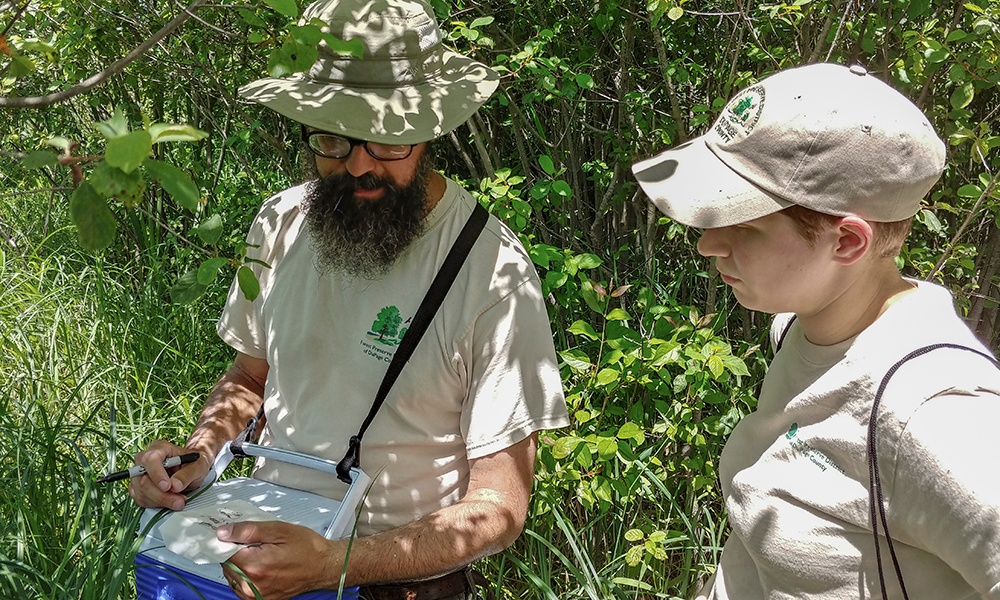 Though the project is far from complete, after seven years we are able to draw some conclusions about the population through the mark-and-recapture method. Most important, while the population is small and fluctuates between years, overall the population is stable and slowly growing. In addition, the restoration efforts appear to be positively affecting the population. In 2017, both the adult butterflies and their eggs were observed in a new area which had previously been planted with the host plants. Subsequent investigations in 2018 confirmed that the butterflies are using these additional host plants for laying eggs. 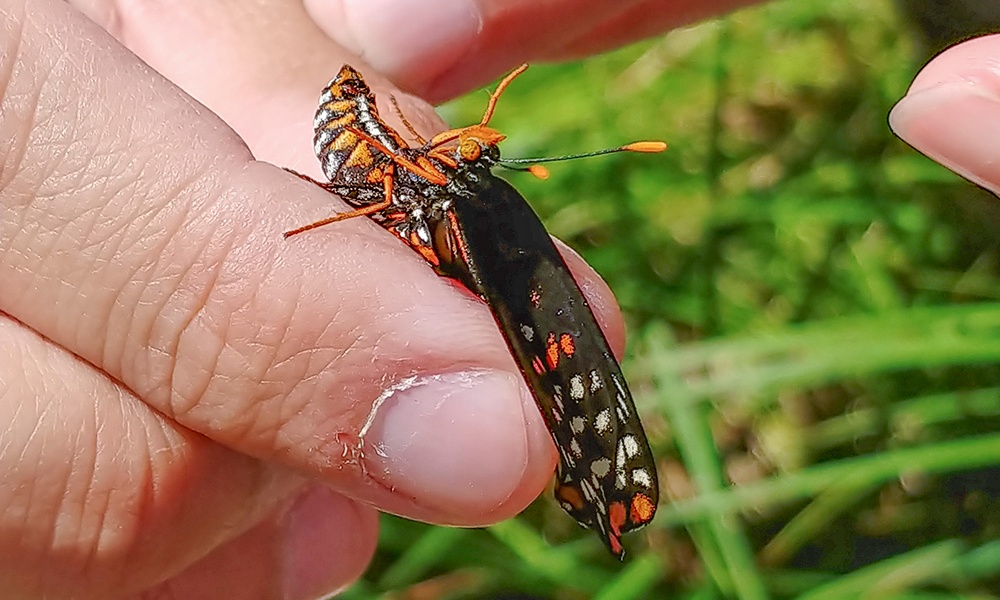 In the end it won’t be a quick process, but once ecologists begin to breed Baltimore checkerspots, they’ll be able to release adults into these restored areas over several seasons to create a self-sustaining, genetically diverse population.

Watch an ecologist demonstrate how he catches a butterfly for marking it and eventual recapture.