Candy as Medicine in the 1890s 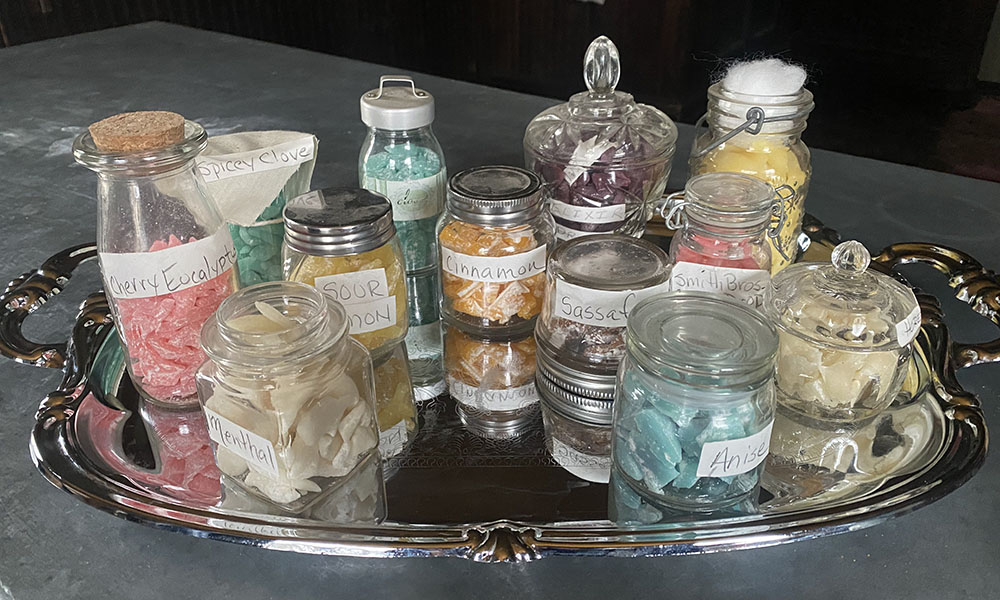 In the 1890s, medicine was largely unregulated in the United States. While professional organizations for doctors and nurses existed, many Americans, including most rural farmers, relied on heirloom family recipes for relief of coughs and colds.

The recipes were sugar-based with oils added for flavor, oils either purchased from mail-order catalogs or distilled from plants gathered from around the farm. In 1895 both Sears and Roebuck Co. and Montgomery Ward Co. offered a variety of medicinal oils in their catalogs.

The recipes combined water, sugar, and an acid (vinegar, cream of tartar, or corn syrup) brought to a hard-crack temperature. The flavored oils and color were then added, and the mixture was poured into molds to set, creating candies that some called drops, discs, or lozenges. When stored well, these hard candies could treat a variety of ailments and symptoms year-round. 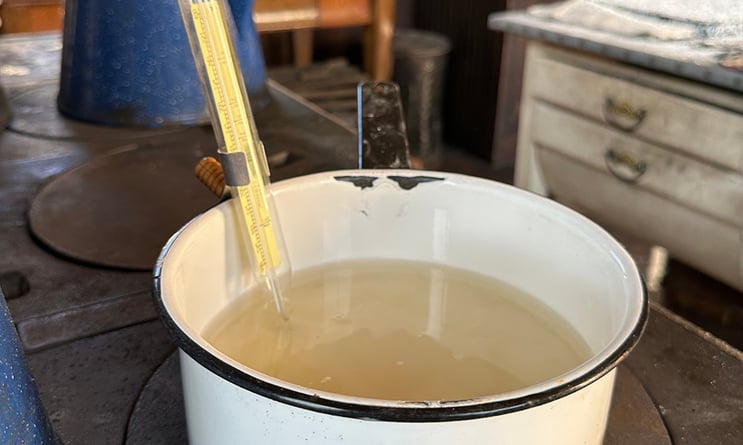 Several plants around the farm were useful in treating a variety of common symptoms. Lavender, for example, which has calming properties and a sedative effect, was used for nervous disorders. Lavender candy was sometimes used to treat migraine headaches.

Peppermint — often deemed a weed in the 1890s — was thought to enhance memory, alertness, and the ability to learn. Peppermint candy also aided with digestive concerns. In 2023 peppermint candy is still considered a natural remedy for good health.

Cherries from the farm’s orchard were thought to help with athletic performance as well as  good, restful sleep thanks to their high amounts of melatonin. Violets and honey from the farm’s apiary were combined to make a candy with mucilaginous properties to “cure” the common cold.

Sassafras tree root — while toxic in quantity — can cause extreme euphoria and pleasure and increased excitement and energy. In the 1890s it was thought to treat syphilis, cancer, urinary tract infections, and diarrhea.

Apples from the farm’s orchard had many health benefits as well, including weight loss, bone strengthening, teeth whitening, hemorrhoid prevention, and heart and lung health. Apples were combined with rose petals to create a gentle laxative candy. 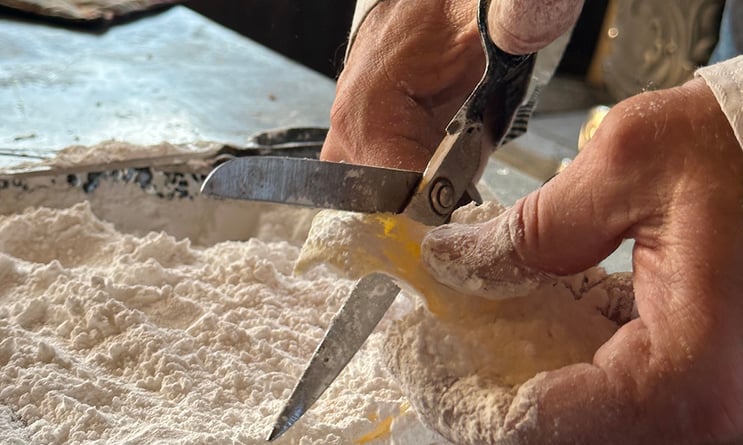 By the 1890s, only the most rural or eccentric farm families would have used their own produce to make oils or extracts. It was far more in vogue to buy modern medicines from the doctor or store, and medicinal oils from around the world could be purchased at local merchants.

Clove oil, for instance, contains eugenol, which has a numbing affect to decrease pain and a natural germicide to fight infection. In the 1890s clove oil was a popular additive in cigarettes. Clove candy was used to ease the pain of toothaches, mouth sores, and baby teething.

Meanwhile, eucalyptus oil from Australia tasted good and was used as a mouthwash for halitosis. Anise and black licorice, while similar in flavor were also anti-fungal, anti-bacterial, anti-inflammatory, and anti-depressive.

Making these medicinal drops on a farm was a winter project, when farmers spent more time inside by the woodstove. Join us at Kline Creek Farm in January to see the time-consuming process from start to finish. Usher in the new year with improved health and happiness as you make the connection between nature and historic farm life by learning how to make medicinal “drops” the 1890s way. 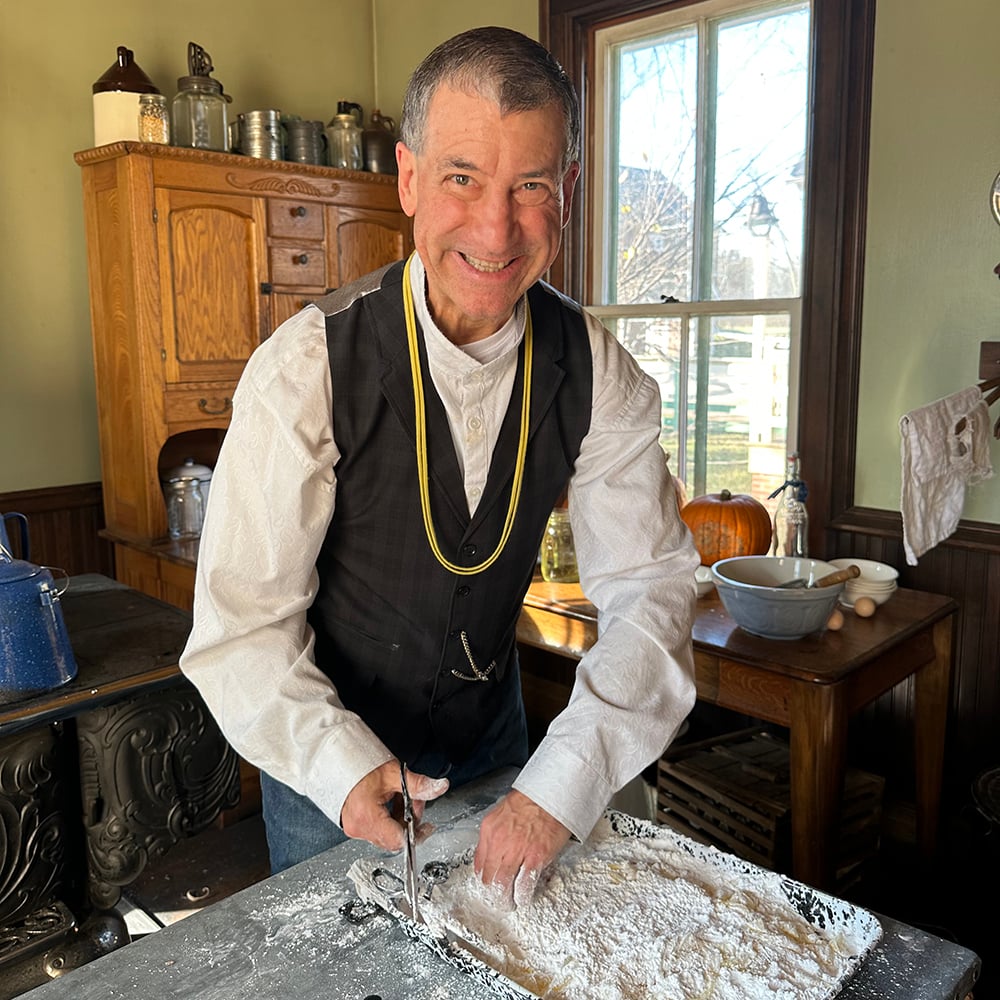 Wayne Hill is a heritage interpreter at Kline Creek Farm in West Chicago, with more than 30 years at the Forest Preserve District. He enjoys teaching forest preserve patrons about history and the environment. He earned a B.A. in behavioral science and M.S. in human-resource development and management.