Why Groundhogs Hit Snooze on Holiday

Why Groundhogs Hit Snooze on Their Holiday

How lucky it is that groundhogs, also known as woodchucks or whistle pigs, have a famous holiday named after them.

Other animals must be jealous that they don’t rise to the level of appreciation that comes with the ever-popular Groundhog Day, a North American tradition aimed at predicting whether we’ll have an early spring.

Willowbrook Wildlife Center’s resident woodchuck, Woodford Charles III, asks only one thing of us on his special day: that we allow him to sleep in just a little bit longer — at least until the end of February. Female and juvenile woodchucks prefer to sleep even longer.

Woodford prefers to wake up closer to March rather than be awakened in the dead of winter in early February. Most male woodchucks that live in DuPage forest preserves are likely to hibernate until mid-February.

Why Hit the Snooze?

Hibernation is important for woodchucks. It helps them survive the harsh winter temperatures and reduced food resources. Groundhogs are herbivores, so they eat many different types of vegetation, particularly forbs and grasses.

When those resources aren’t available in the winter, they need another way to survive.   Animals have developed many ways to cope with winter weather. Many birds migrate, mammals may grow a thicker coat of fur or adjust their diets, and in the case of cold-blooded species, they enter a period of dormancy called brumation. Woodchucks can’t migrate with their short legs, even though they can run nearly 10 mph. So they hibernate.

Woodford enjoys a treat while getting weighed during a health check at Willowbrook Wildlife Center.

Hibernation is no accident. Woodchucks pick up on external triggers that tell them it’s time to hibernate, including shorter days and less food sources.

Winter hibernating burrows for woodchucks differ from their summer nesting chambers by location and sometimes substrate. The woodchuck enters the winter burrow and seals off the entrances with dirt, feces, and other vegetation before nestling snugly in the dark underground home. To prepare for a long winter’s nap, a woodchuck drops its body temperature to a mere 36 degrees Fahrenheit, drops its heart rate to about 10 beats per minute, and decreases its breathing as well. It relies only on fat reserves to sustain it through the long winter. 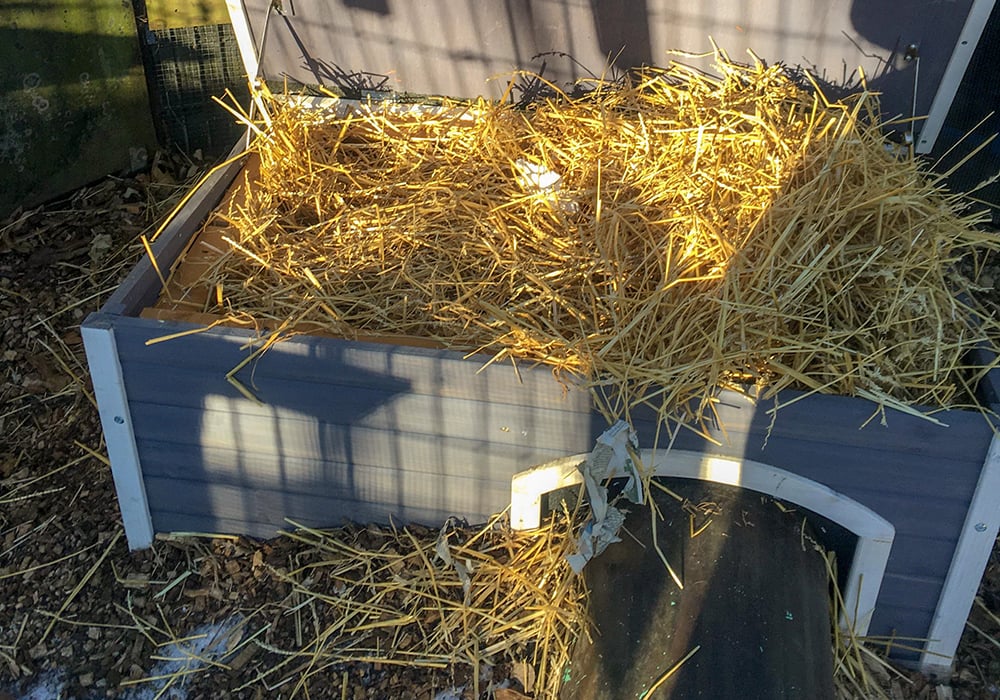 Imagine what it might feel like to be awakened from such a deep slumber. The woodchuck will be sluggish due to its slowed internal workings. It’s not a comfortable feeling.

Woodford grumbles and groans when our animal keepers check on his health throughout the winter. They have to move his bedding and check his breathing to ensure there’s no respiratory distress. When they do this, sometimes they hear a deep rumbling sound. That tells them all is well and Woodford can keep on dreaming. 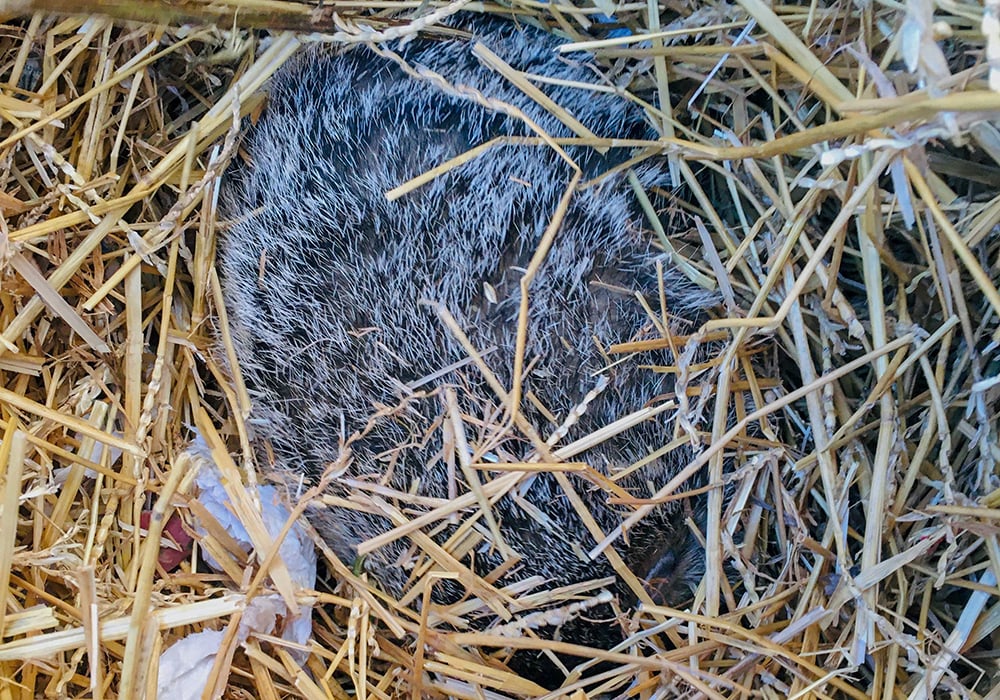 Woodford hibernates in his burrow at Willowbrook Wildlife Center in Glen Ellyn.

If Woodford were woken up and forced out of hibernation, his blood flow, metabolism, and mental state would not be ready to handle the sudden change. When he wakes up slowly and on his own schedule, nature takes its normal course and prepares him for the transition.

Woodford needs some time to wake up out of hibernation. As temperatures increase, he will begin the process of emerging from hibernation. Generally, the woodchuck’s body will go through a process of fast and slow heart rates, pushing the blood flow around as he comes out of different states of torpor (physical/mental inactivity). Finally, Woodford is fully awake, usually about 30% lighter than when he went into hibernation.

At Willowbrook, we look forward to Woodford waking up every spring from the burrow in his outdoor exhibit enclosure. He’s a favorite among our visitors, volunteers, and staff. But we’re willing to wait and let him do it on his own terms, so he can stay as happy and healthy as possible. 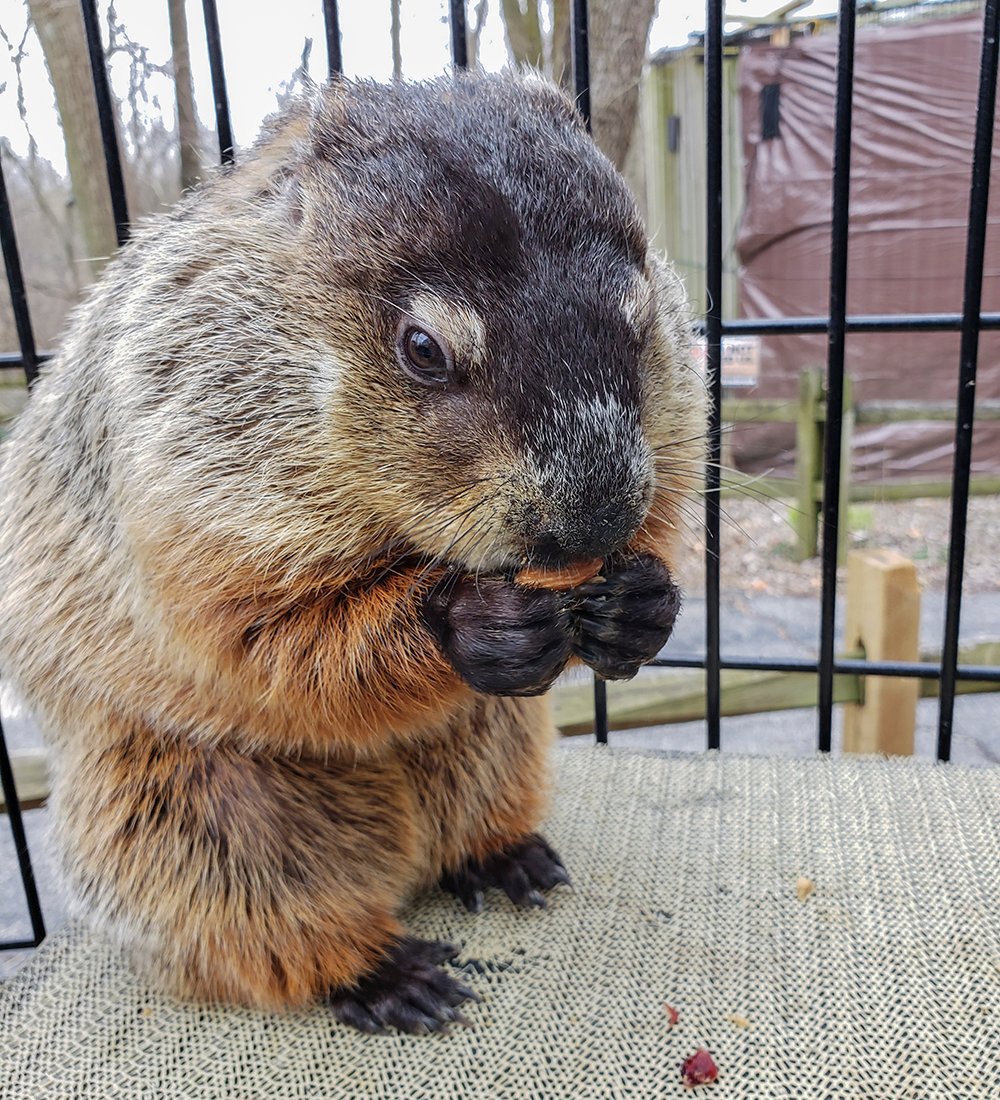 Woodford enjoys a snack at Willowbrook in warmer times when he's not hibernating.

Nate Hambel is a wildlife interpreter at Willowbrook Wildlife Center in Glen Ellyn. He enjoys teaching about wildlife, natural-resource management and outdoor recreation. He is trained in interpretation and wilderness first aid. He earned a B.S. in outdoor education and an M.A. in biology.