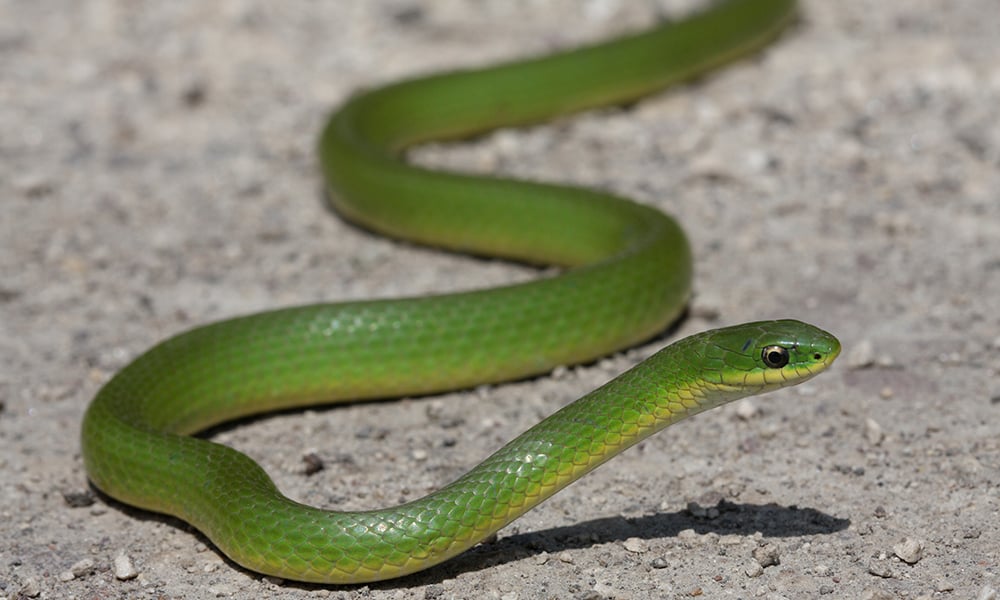 Their numbers have been in decline for years throughout their range, which includes DuPage County. In Illinois, the smooth green snake is listed as a species in greatest need of conservation and locally as one of 12 identified by Chicago Wilderness as a priority species.

The DuPage Forest Preserve District has teamed up with Peggy Notebaert Nature Museum to increase their numbers in DuPage County and the Chicago region. 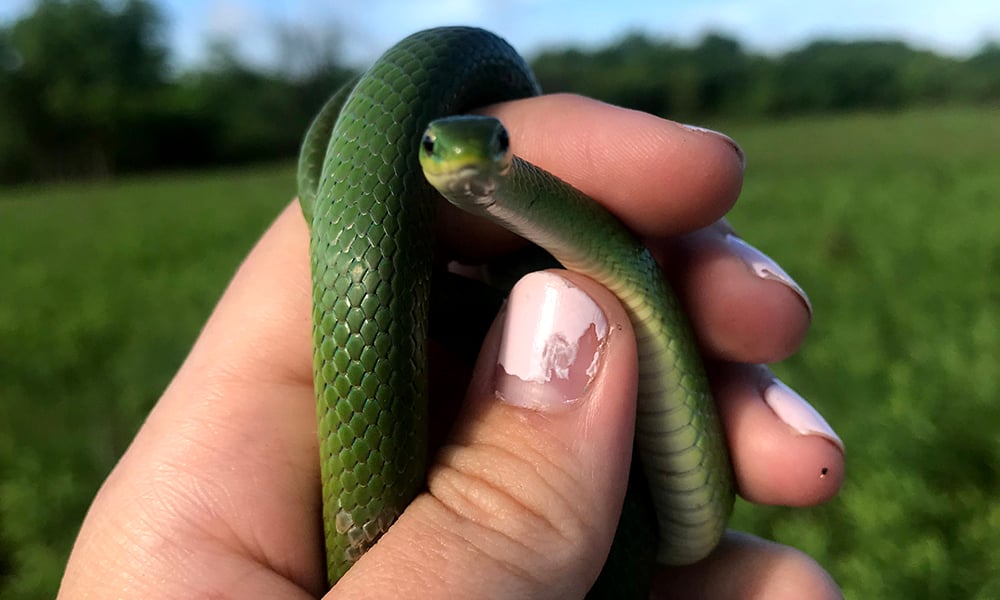 The smooth green snake’s range extends from southern Canada to a few isolated populations in northern Mexico. They are not widely distributed in Illinois, but they occupy a good portion of the northern half of Illinois. We have historic records of smooth green snakes being present in 8 DuPage forest preserves, but are working to increase their numbers in only 3 DuPage forest preserves.

Their decline has been due to habitat loss due to development, ecosystem fragmentation, pollution, invasive species and environmental changes.

Fragmentation can have a serious impact, even when habitats are in good or excellent health. When natural areas are surrounded by development, this enhances the previously mentioned stressors. 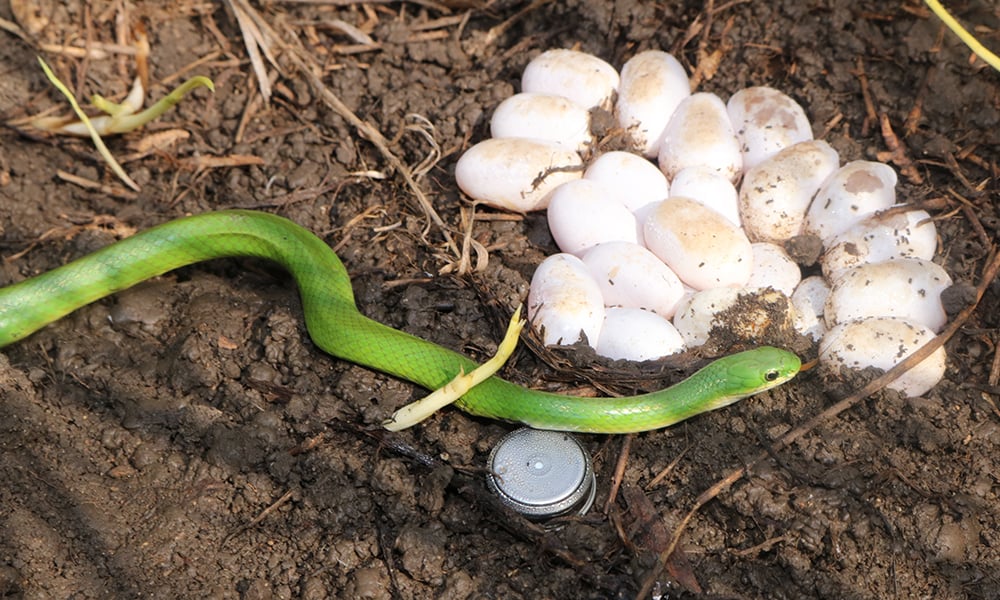 Without connection or travel corridors to additional habitat, an isolated natural area essentially becomes an island. Less mobile species likely won’t survive a trek to find new habitats, while very few if any from other natural areas will find their way to this habitat. This now genetically isolates a species population from other populations in the area. In time, this can have a detrimental effect.

To address this decline, the Forest Preserve District has been working with Dr. Allison Sacerdote-Velat, curator of herpetology at the Chicago Academy of Sciences/Peggy Notebaert Nature Museum, who has been leading the conservation effort to increase smooth green snake populations in the Chicago region. 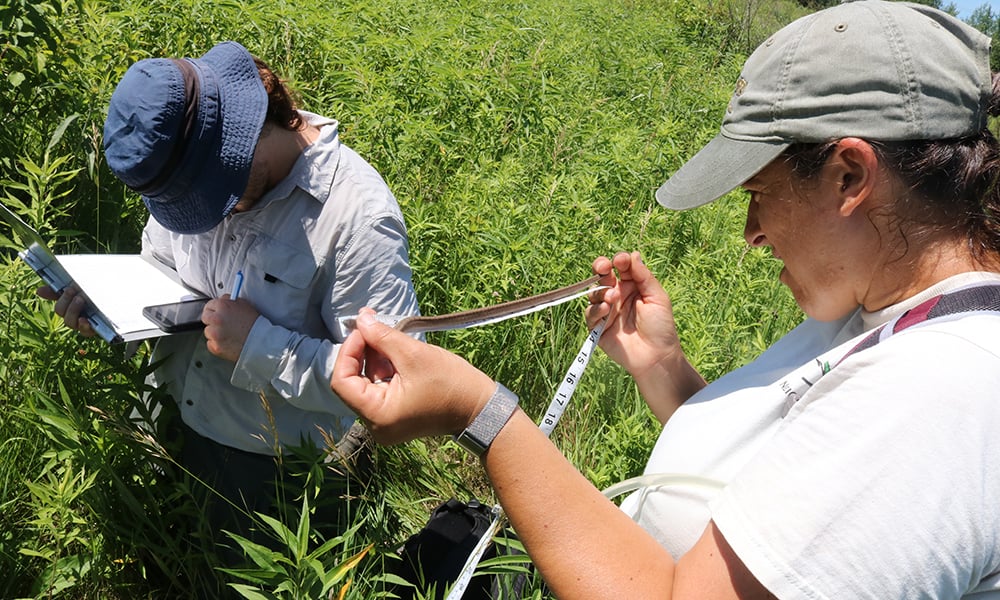 They also hope to learn more about the snake’s current distribution and threats; use population and habitat models to guide conservation efforts; supplement existing populations; and reintroduce new populations with experimental approaches in historic locales. 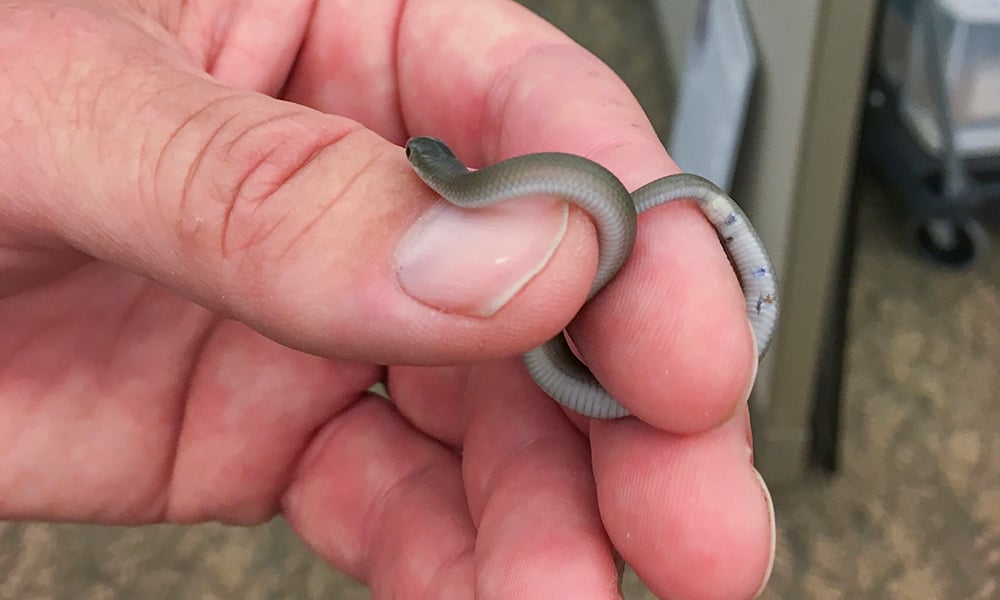 Baby smooth green snakes are marked before they are released back in DuPage forest preserves.

Populations are studied by capturing and marking all snakes, and recording body mass and length, sex, reproductive status and location. When captured later, the marked snakes provide growth and movement data, and collectively over time determine home-range size and survival rates. This information is critical to determine how well a species is doing in addition to how well our conservation and restoration efforts are working.

Reproductive success is also being monitored. Smooth green snakes are oviparous and lay 1 - 14 eggs at a time, frequently in a communal nest with other smooth green snakes. Incubation time ranges from 4 to 40 days, but in Illinois the average incubation time is 20 days. During the incubation process, the eggs are vulnerable to predators and poor environmental conditions because they cannot move. 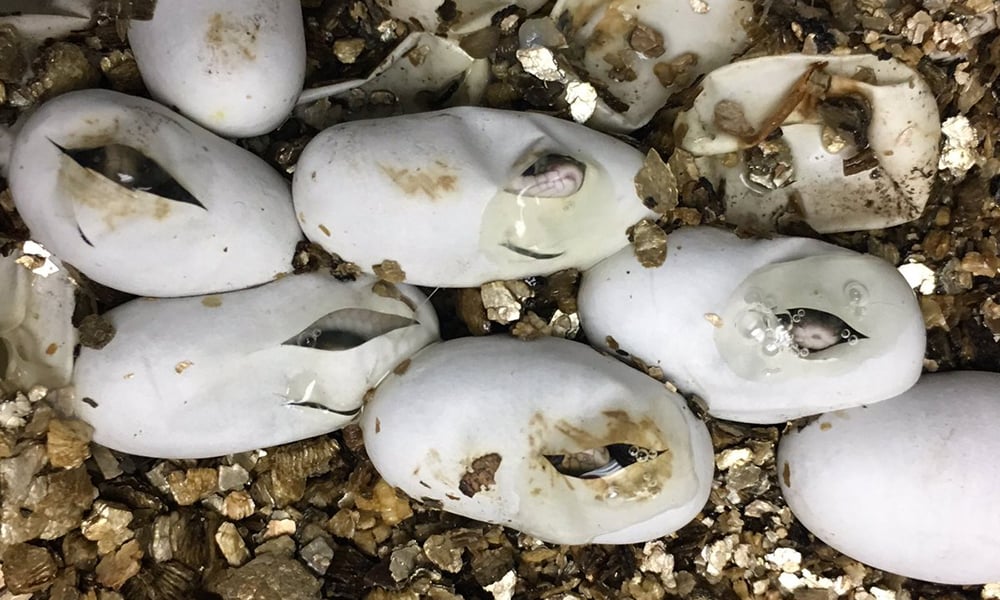 Members of the smooth green snake recovery effort search for and monitor eggs during the nesting season. Since they communally nest it makes work easier to locate eggs from multiple females.

Approximately half the eggs found are collected and incubated at the Forest Preserve District’s Willowbrook Wildlife Center in Glen Ellyn. The rest are left in the preserve to monitor natural hatch success. This is important to ensure a fair number of young.

During a dry and hot incubation period egg failures can be high in the natural nest. Young that hatch out at Willowbrook are marked just like adults found during surveys. The neonates are released back to the location where their eggs were collected. 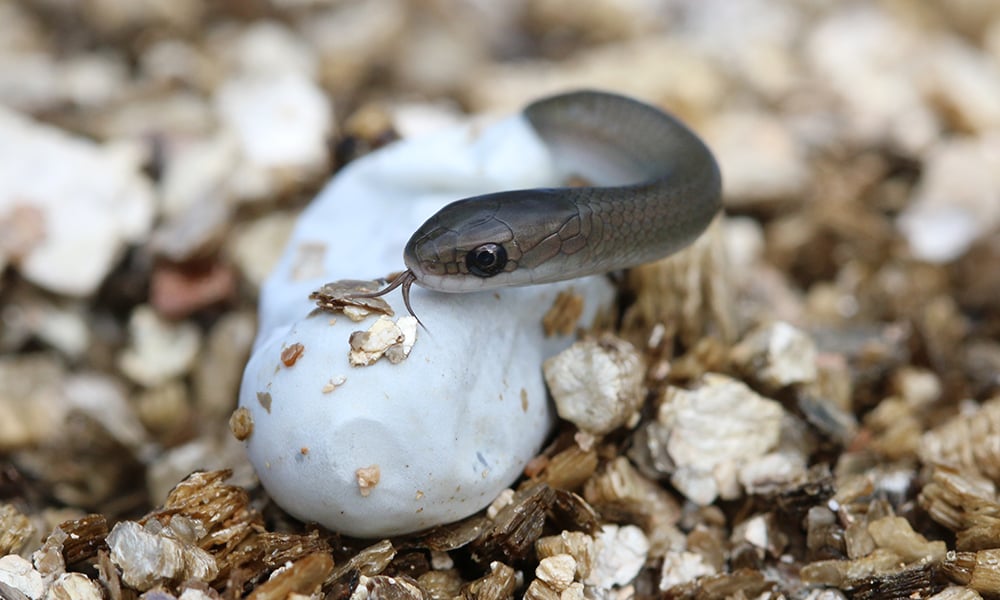 In four years of collecting data and monitoring the snakes, the average captive hatch rate is just over 97%, compared to the average field hatch rate of 52.5%.

While adults are a bright green that camouflage very well with surrounding foliage, the young are born a olive drab, also a very good cover. Their color slowly changes from olive drab to the vibrant green as the snake grows. 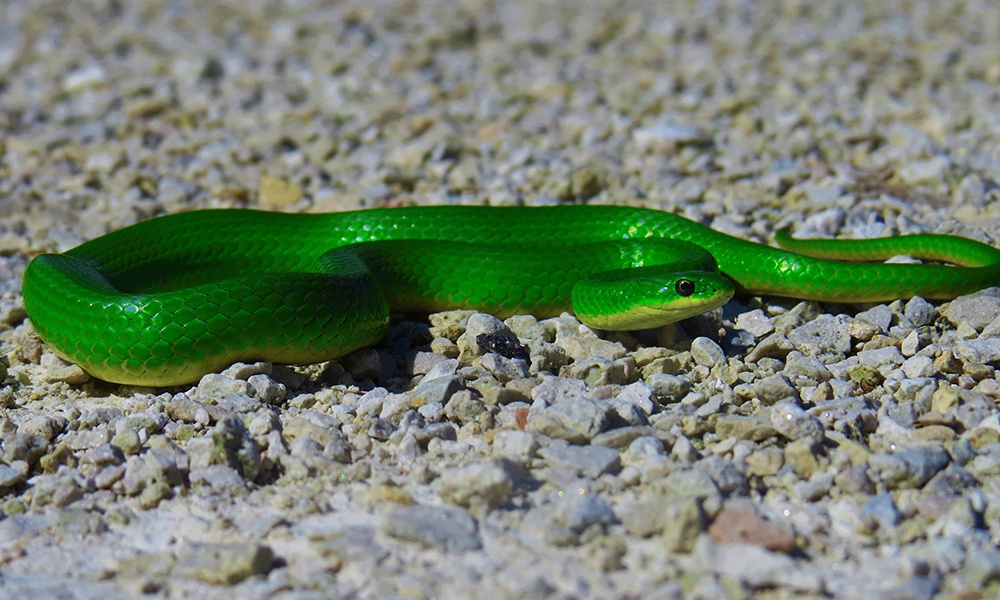 Many people fear snakes, but snakes serve an important role in maintaining ecological balance and environmental health. The smooth green snake is a species that may help sway people’s opinion. It’s a beautiful snake with a mild temperament. Hopefully if people learn more about this species it can change attitudes. While people don’t have to love snakes, perhaps they can give them the respect and appreciation they deserve. 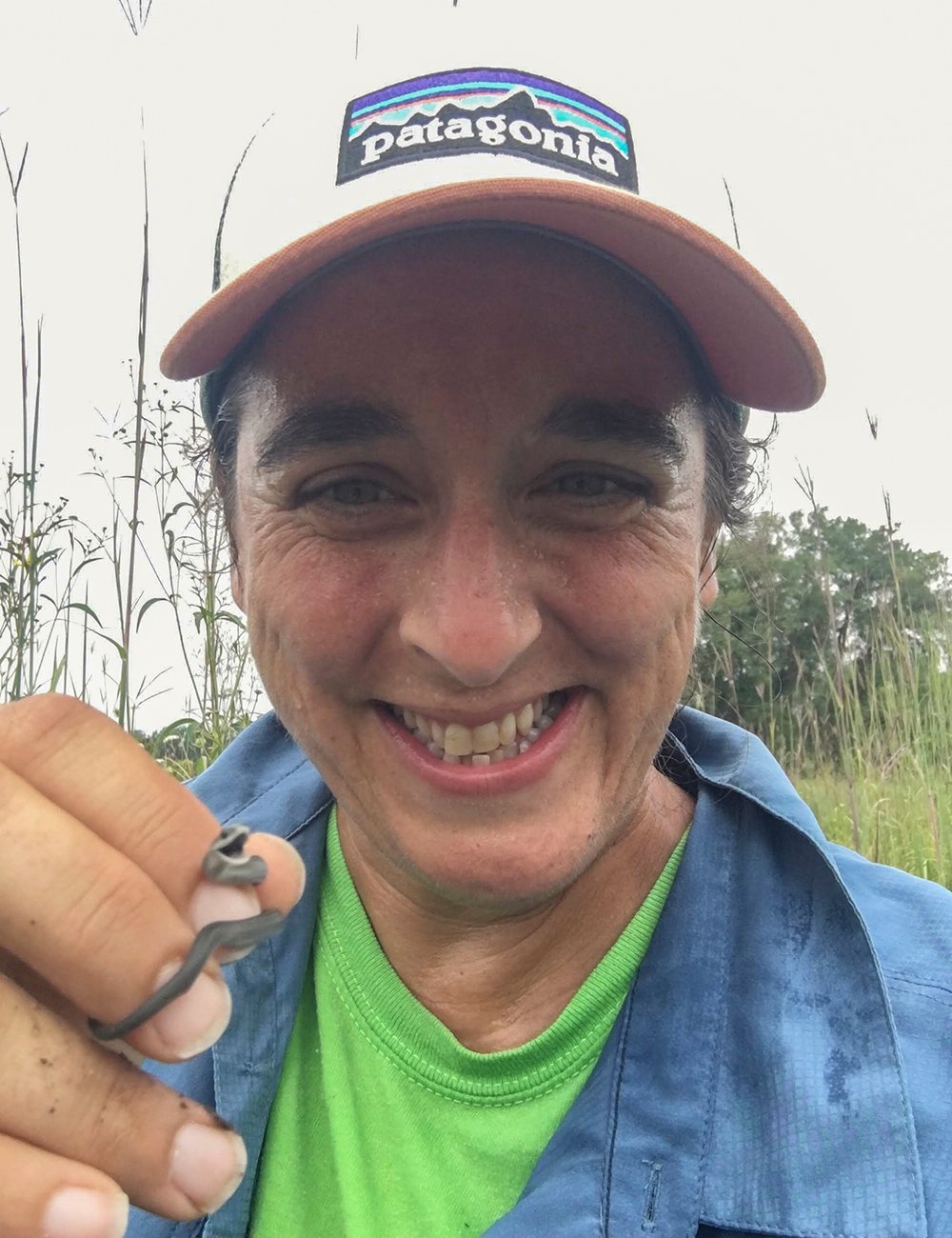 Dan Thompson is an ecologist in the District's Natural Resources Department. He has been with the District since 1988.