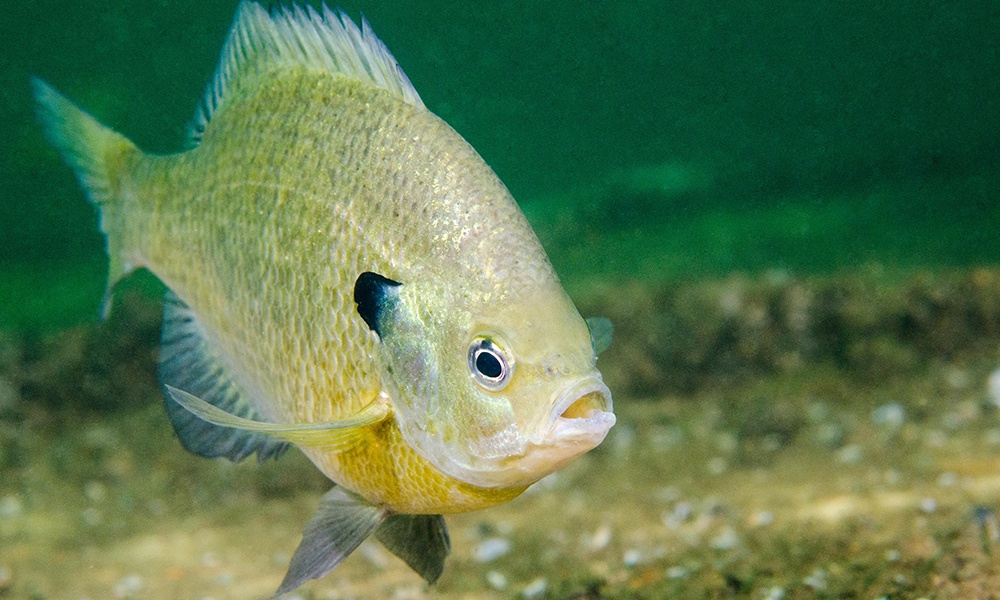 Much like birds, sunfish like bluegill and bass are busy building nests in DuPage forest lakes in preparation for their growing families.

Probably some of the most recognized fish in DuPage forest preserves, the family Centrarchidae includes large and smallmouth bass, bluegill, green sunfish, red-eared sunfish, pumpkinseeds and others. Bluegill is the state fish of Illinois.

Members of this fish family are usually deep-bodied and have a flat, pancake-like appearance, allowing them to make quick turns in the water where they usually cruise amid shoreline vegetation and other coverage.

A Natural Wonder on Display

Seeing sunfish nest colonies in a lake is a very cool natural wonder. But understanding the sunfish’s biological attributes can lead to their conservation success and fishing success in the future.

Let’s talk about spawning first. Male sunfish build the nests and do most of the work to attract a female and take care of the fry, or baby fish. As a female sunfish approaches a nest, the male will begin to circle her and swim around her. Once she has chosen her mate, the two will swim together in the nest circling each other.

If the female decides to stay, the fish will touch bellies and spawn occurs. After the female drops the eggs, the male chases her out and will continue to guard and care for the eggs. A single female bluegill can lay between 10,000 and 60,000 eggs.

Male sunfish are very territorial during breeding season and while on nests. They constantly protect the nest and vulnerable babies from predators, including other sunfish.

Guarding a nest or nesting site is hard work that involves constant battles and chasing of other fish and predators, which includes other sunfish, smallmouth bass, largemouth bass, bullhead catfish, carp, snails and crayfish.

Some non-breeding bluegill or sunfish also wait on the periphery of the nests for a chance to swoop in and take over nest-guarding duties, mate with female sunfish or eat the eggs/fry on the nests. 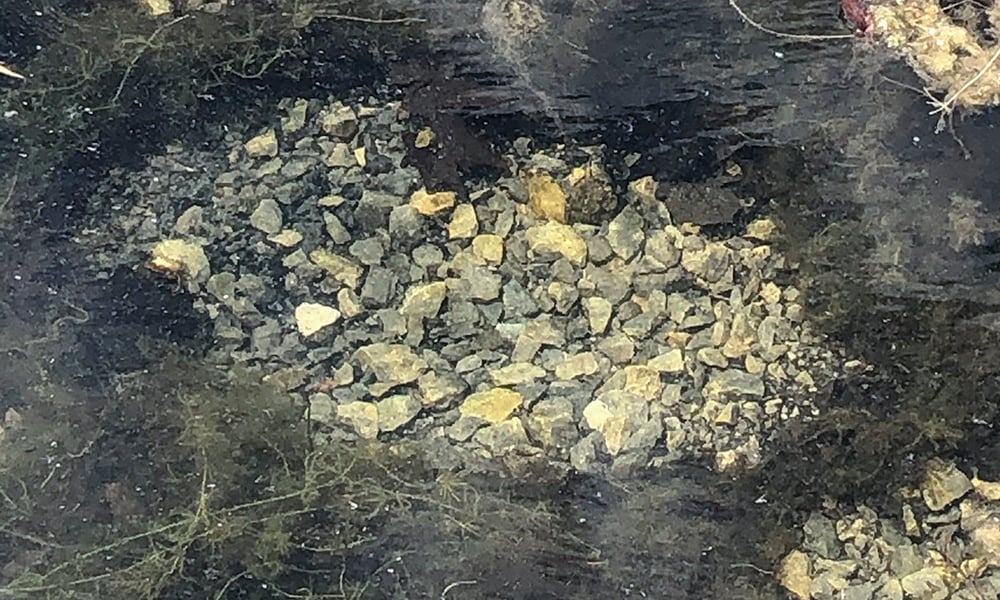 Male sunfish will build a nest — a saucer- or circular-shaped depression in the shallows of a lake  — when it's time to spawn. He fans it with his fins to keep it clear of silt and attract a mate.

The typical spawning process for sunfish
1. Males establish a territory.

2. He then builds a nest. His nest is a saucer-or circular-shaped depression in the floor of the lake. He fans it with his fins to keep it clear of silt. This is partly what he uses to attract a female. Usually, nest diameter is relative to the size of the male. Bigger nest means bigger fish protecting it.

3. The male courts one or more females with displays, fin movements and chasing.

5. Males defend the eggs and fry from predators. They continue to fan the nest to help oxygenate it and keep it clear from silt buildup. 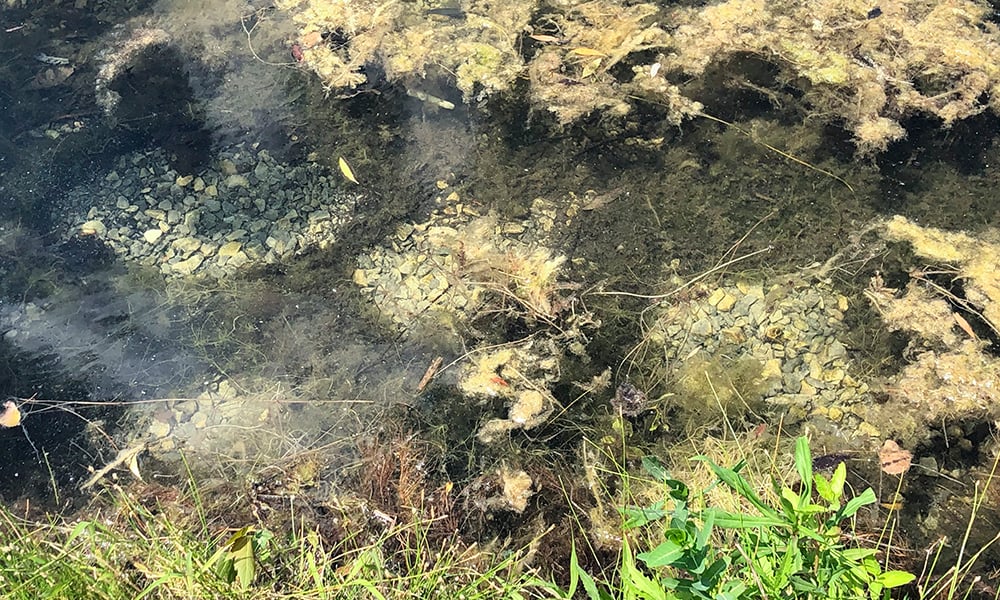 Male sunfish must constantly defend their nests from other sunfish that wait on the periphery for a chance to swoop in and take over nest-guarding duties, mate with females or eat the eggs on the nests.

Sunfish build nests in the shallows of lakes that are highly visible and easy to spot this time of year. Head out to a DuPage forest preserve lake, walk the shoreline and look for circle-shaped gravel patches at the bottom of the lake.

Stand still and look closely and you will likely see a fish swimming in the center of that circle. Bluegill, for example, are colonial nesters. They build their nests in densely packed colonies along the shores of lakes. Generally, spawning is synchronized and all the breeding-aged bluegill in a lake spawn at about the same time in these colonies.

Fish nest in colonies to increase the odds of their babies’ survival. The nests along the edge of the colonies are as much as three times more likely to be eaten than the nests on the inside of a colony. 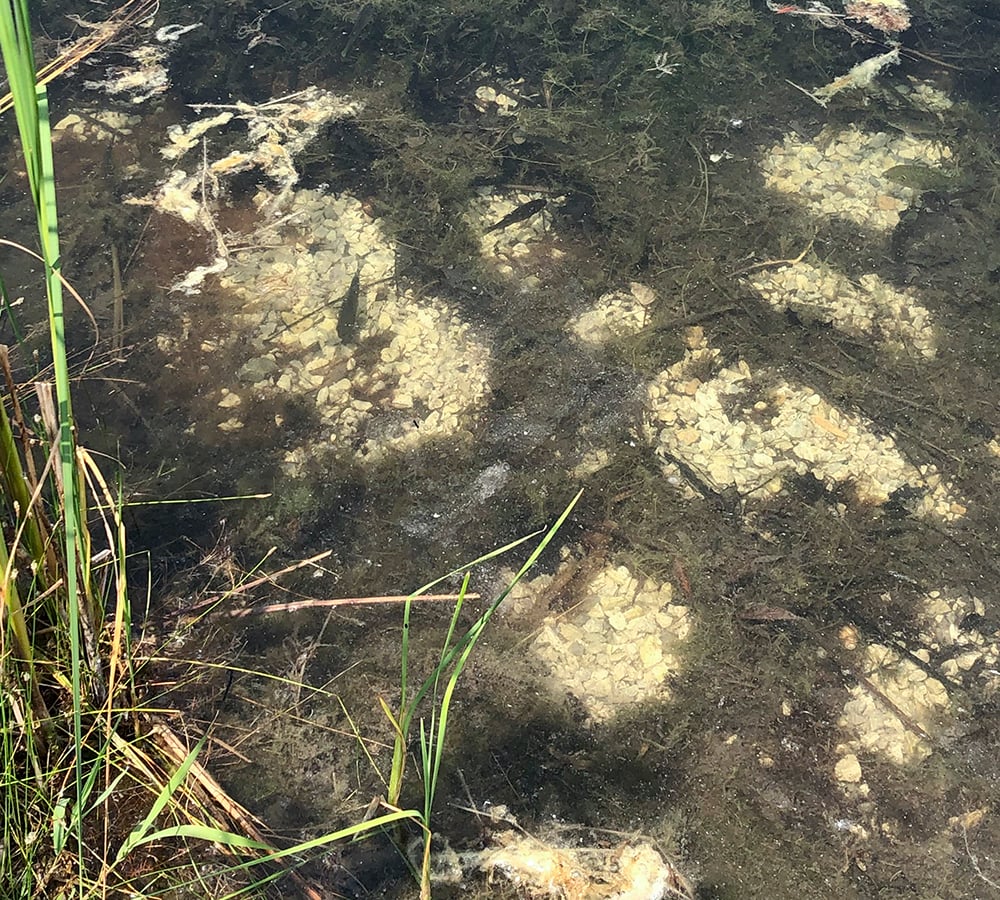 Male sunfish are very territorial during breeding season and while on nests. Guarding a nesting site is hard work that involves constant battles and chasing away other fish and predators.

For anglers, It’s important to take a conservation-minded approach if harvesting when fishing. Give the fish time to spawn and raise their young successfully when fishing.

We want the biggest and best genetics in these fish to be passed on to future generations, so fishing for the largest fish while they are on a nest may negatively affect the lake’s population in the future. It’s best practice to wait until they are done spawning to target large sunfish. Future generations of bluegill in that lake can be overall bigger, which means more large fish to catch.

During this time, you can fish for bluegill or sunfish that are not on nests. Many times there are a lot of fish still hanging around docks and other structures in the water that are still hungry and will chase your bait.

Take time to observe the fish on their nests. It’s fun to watch the dynamics and behaviors of these fish during nesting season. If you have young children, take them to see these fish while nesting. It’s a thrill and a rarity to see so many fish up close in one location! 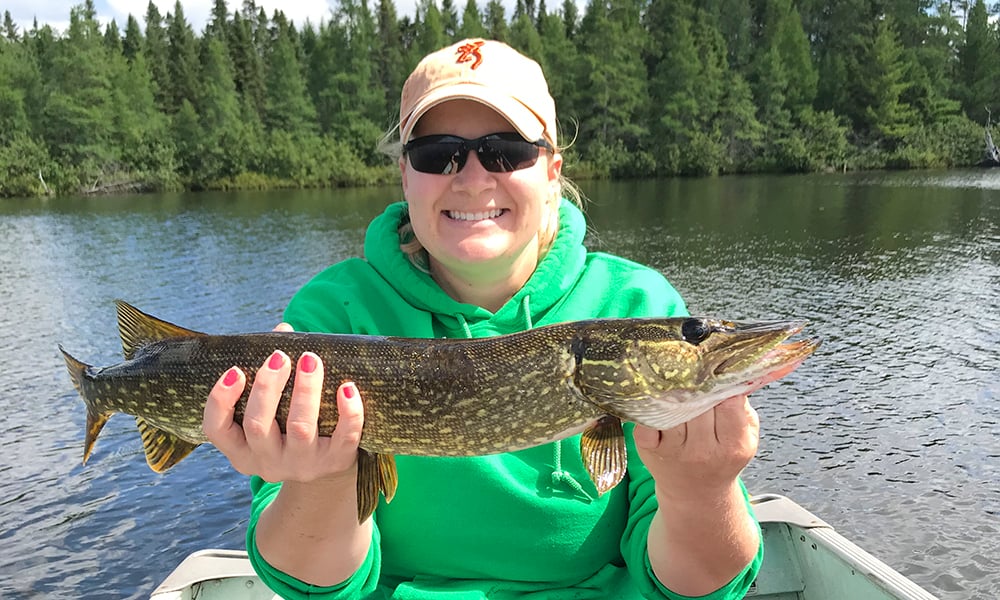 Fullersburg Wood naturalist Keriann Dubina with a northern pike, a predator of sunfish.