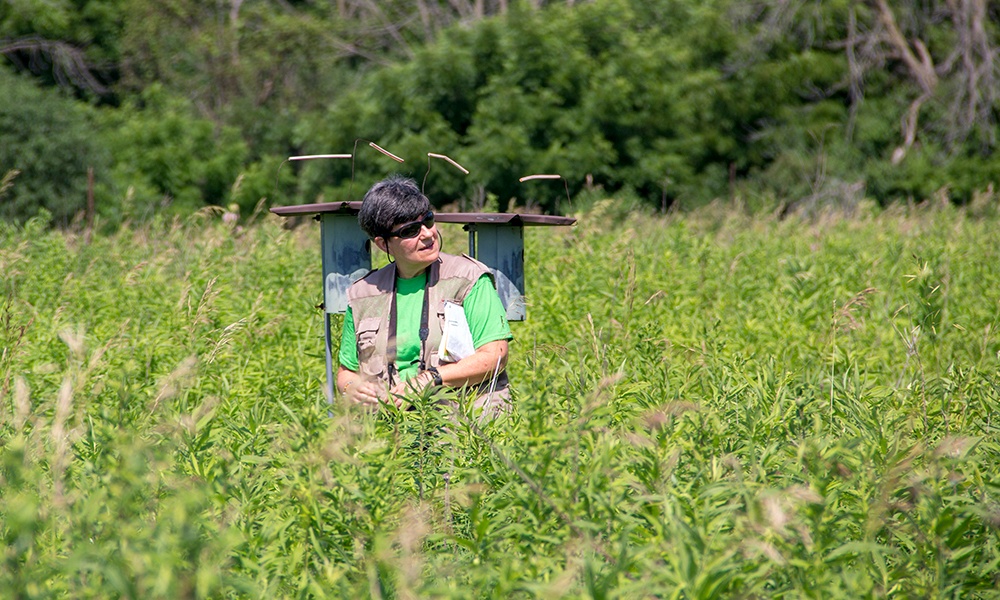 Helen Metanchuk rummages through the trunk of her car as she dons her vest, binoculars, tools and notebook and pen and sets out to check the 12 bluebird nest boxes on her route at Blackwell Forest Preserve’s McKee Marsh in West Chicago.

The day is heating up on her late morning trek through tall grasses, brush and prairie flowers that sometimes engulf the petite retired schoolteacher. “I’ve been doing this for about 10 years now,” Metanchuk said. “All my life liked nature, and I’ve always loved animals. I like being outdoors.” 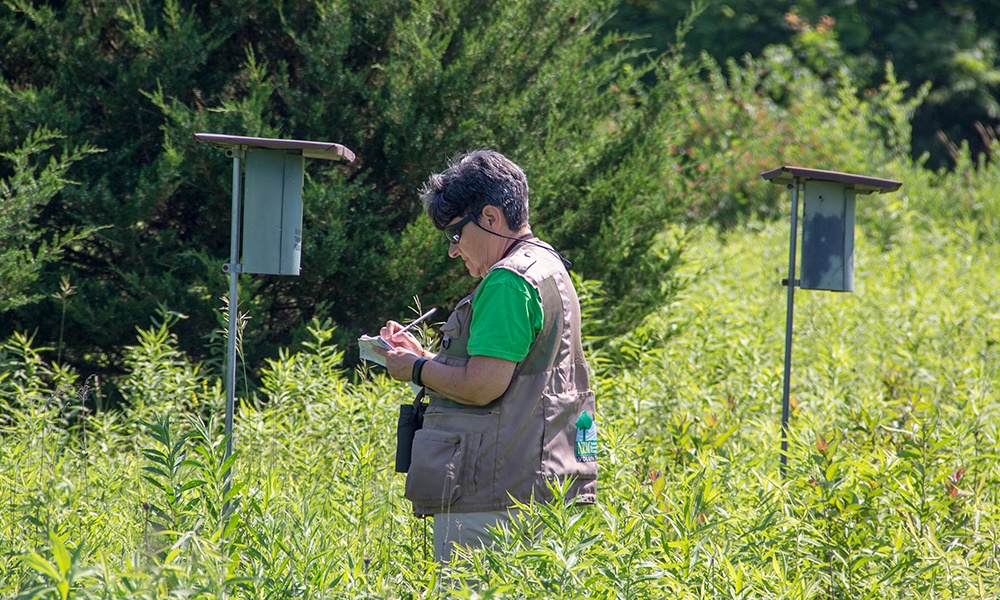 Bluebird monitors help staff study bluebird populations by listening for and observing bluebirds in the preserves. 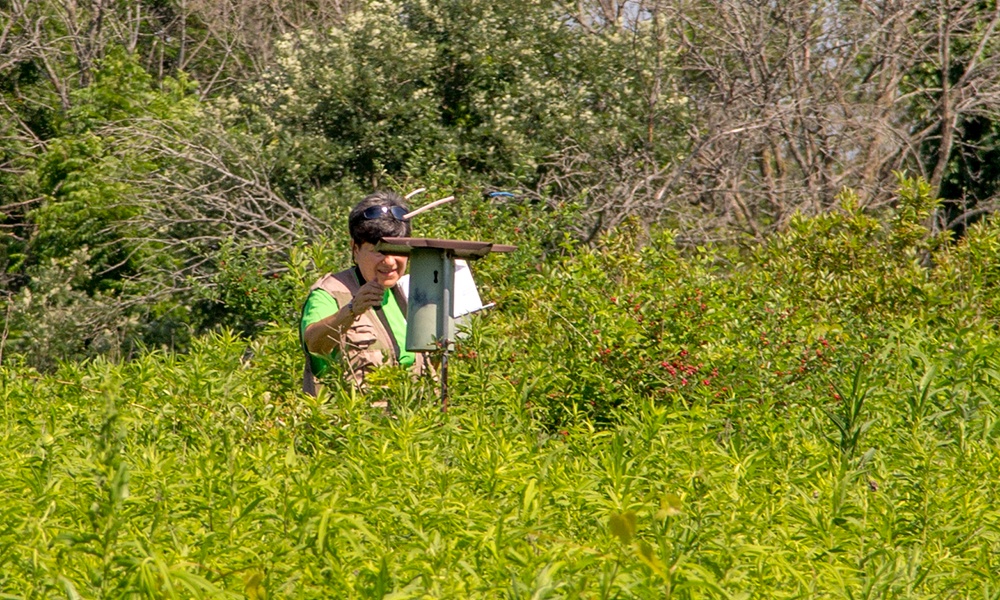 “My Aunt Stella always had me help her plant flowers when I was young,” Metanchuk said. Her interest in nature was renewed when she attended September camp in William Bay, Wisc., on Lake Geneva in college as a student at George Williams College, now part of Aurora University.

“It made me realize the importance of being a good steward of nature as well as how much I enjoyed being out in it, Metanchuk said.

She has been monitoring the same route the entire time. “Bluebirds are really cool if I get them,” she said. “Usually they do two nestings in one season.”

Often times, the nesting boxes are taken over by tree swallows, which are quite aggressive. 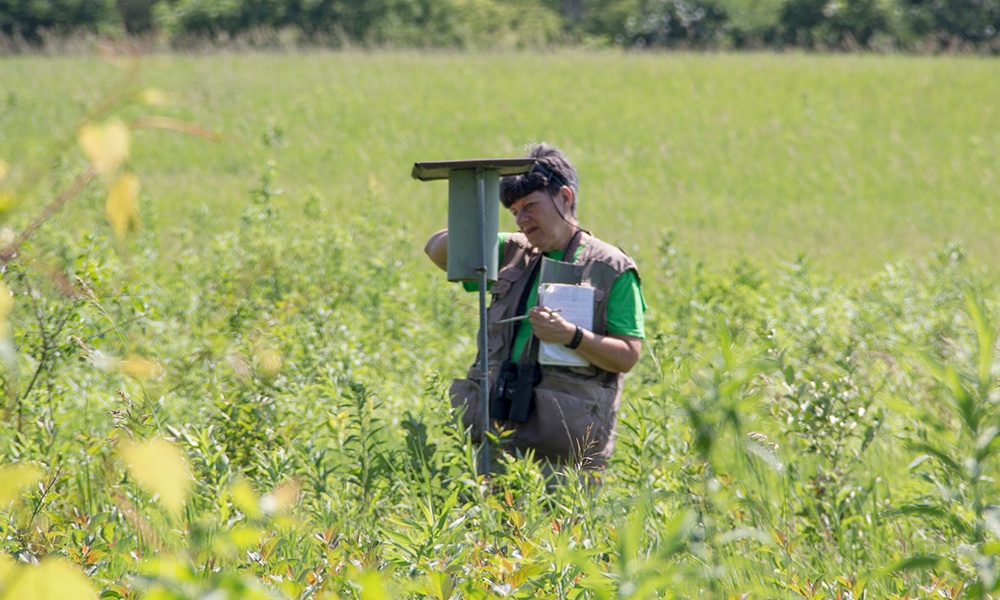 Metanchuk heads off-trail amid tall grasses and shrubs that sometimes engulf her small frame. She opens the nesting boxes and clears out an unused nest from one of them. “Last week there were four tree swallows in those boxes,” she says after returning to the trail.

“It’s exciting to see things,” Metanchuk said. “One time I came out here and there were two turkey vultures. I’ve seen bob-o-links, kingbirds and meadowlarks and I’ve heard all kinds of woodpeckers.”

Metanchuk, of Bolingbrook, said bluebird monitoring gives her another reason to be out in nature. 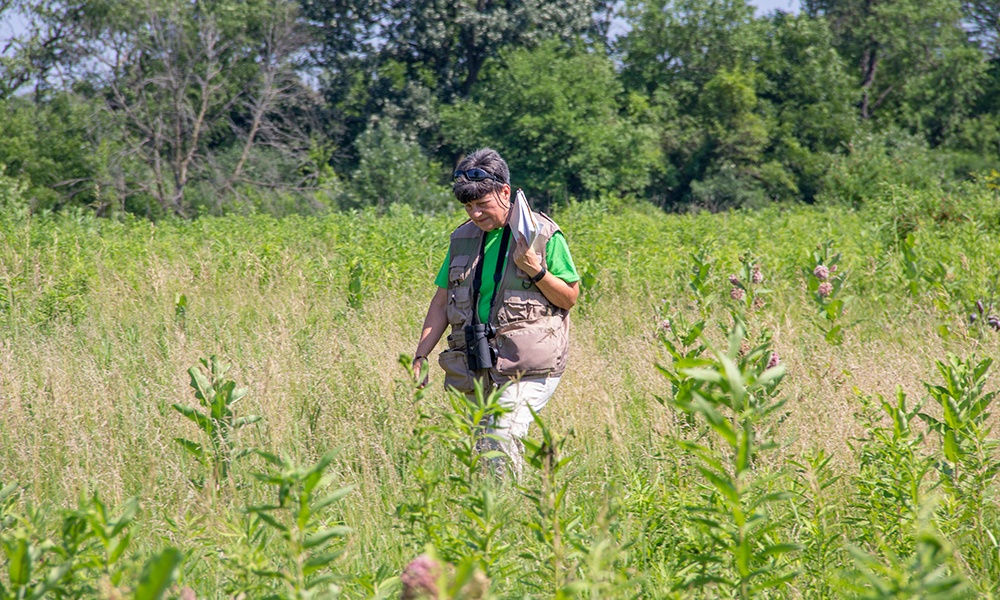 “When I’m out in nature I can relax; all the tension drains out of me,” Metanchuk said. “It’s a good time to reflect and pray.”

“I’m inspired by nature because of how complex and intricate everything is,” Metanchuk said. “I’m amazed by how plants and animals rely on each other for survival. How animals and plants can adapt in order to survive in spite of human neglect and outright assaults on nature.”

For those interested in connecting to nature but unsure where to start, Metanchuk recommends, “Just start out by walking the trails — they’re great,” she said. “And if you’re interested in birds, do this,” she says of bluebird monitoring.

“Nature is good for us and it’s important for us to learn how to be good stewards of nature,” Metanchuk said. “If we take care of nature, it will take care of us.”

The District offers a number of volunteer monitoring programs, including amphibian, bird, butterfly, dragonfly and fungus. For more information about volunteering, contact Volunteer Services at 630-933-7233 or volunteer@dupageforest.org.