Which Insect Is It?

Picture it. It’s a beautiful summer day. You’re on a DuPage forest preserve trail, and out of the corner of your eye you see ... something. Something small, something moving. Some kind of insect. Is it a bee, wasp, or fly? A beetle, butterfly, or moth? Insects are the most abundant and diverse group of animals on the planet (there are 30 million species worldwide), so figuring out who’s who can be a task, but by looking at a few features, you’ll find insect identification isn’t as hard as it seems.

First, are you looking at an arthropod? Does it have distinct legs and a hard outer covering? If so, it’s an arthropod. Not all arthropods are insects, though. Does it have wings? Then it’s an insect. Insects are the only arthropods that have them. Spiders, daddy longlegs, centipedes, crustaceans, and other arthropods don’t have wings, so they’re not insects. If you still aren’t sure, look at the number of body segments and legs.

Insects always come in threes: three body segments and three pairs of legs. Other arthropods typically have fewer body segments but more legs. Spiders have four pairs of legs, many crustaceans have five, and centipedes, well, they have a bunch.

So now that you know you’re looking at an insect, it’s time to look at divisions of insects, called orders, and who belongs to each. To date there are 29 different orders, which means it would be difficult to describe them all here, but we can look at some general features of a few that live in DuPage.

One of the most recognizable orders is Lepidoptera, the butterflies and moths. These are insects with large fully colored wings covered by “scales,” which protect the wings and are unique to this order. Other insects may have pigmentation on their wings or scales on other parts of their bodies, but wings fully covered by scales tells you it’s a Lepidoptera. But how can you tell the difference between butterflies and moths? Both can be colorful or drab, and both are active during the day, but butterfly antennae are thin with small bulbs on the ends; moths’ are feathery or serrated. 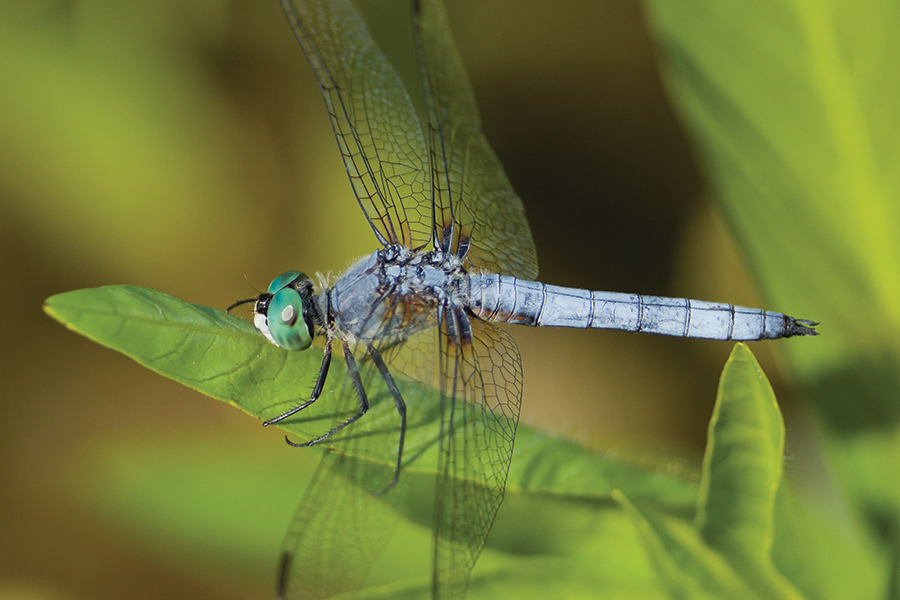 One way to tell a dragonfly, such as this eastern pondhawk, from a damselfly is to look at its wings at rest. Dragonfly wings are usually spread out. A damselfly’s will be tucked over its body. Image Anatoliy Lukich/Shutterstock.com 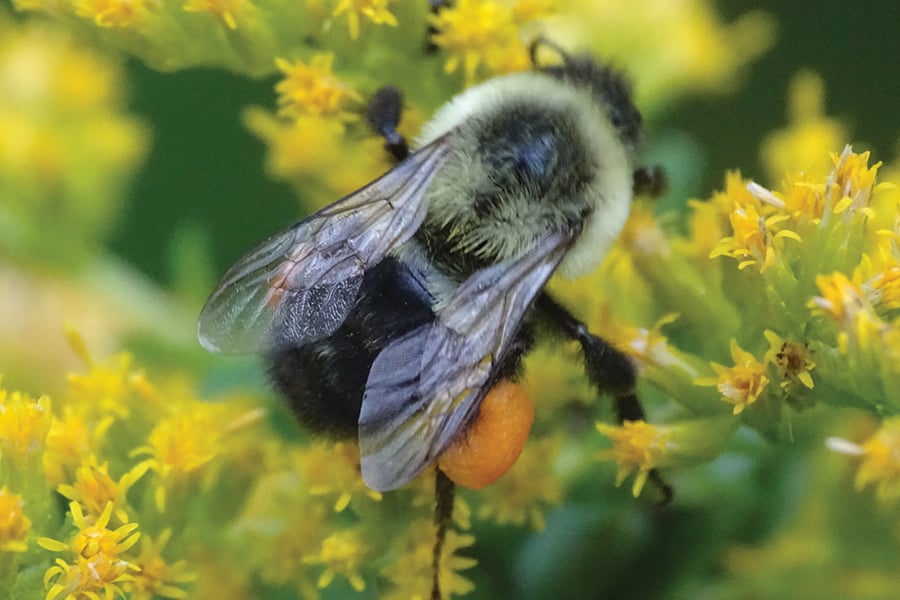 Bumblebees and other bees tend to be stocky. 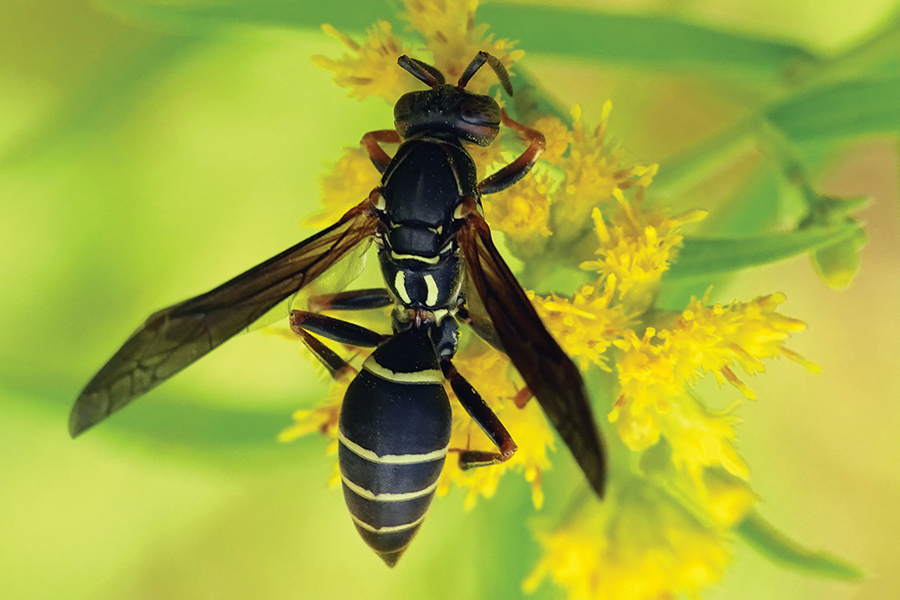 Paper wasps and their ilk have more defined “waists.”

Another order is Hymenoptera, which includes ants, bees, and wasps, most with pinched waists that give them an hourglass shape, although this can be difficult to see in bees, which are stocky. Two examples of Hymenoptera are the common eastern bumblebee, which like other bumblebees is quite stout and covered with hairs, and the paper wasp, which like most wasps is slender, smooth, and shiny.

Of all the insect orders, Coleoptera, or beetles, are the most diverse. Beetle features are harder to see but make them easy to ID once you do. First, beetles have mouthparts called “mandibles” for chewing and not for stabbing (like mosquitoes) or sucking (like butterflies). Their first pair of wings are also modified into hard outer coverings, called “elytra,” that fully cover their soft flying wings. Common coleopterans include fireflies, ladybugs, and June bugs. You may also spot the distinctive (and fast) metallic green six-spotted tiger beetle on sunny forest preserve trails.

Now onto the order Orthoptera, the grasshoppers, crickets, and katydids, most with large well-developed hind legs for jumping. Grasshoppers, usually green or brown with short, stubby antennae, make clicking sounds with their wings as they spring from place to place. Crickets are black or brown and smaller with long, slender antennae. They produce a chirping sound with their legs. And if you see something big and green with long antennae (or hear a staccato “katy-did-katy-didn’t” call at night), that’s a katydid!

Both members of the Odonata order, dragonflies and damselflies, are often found near water (they spend most of their larval stages developing underwater), and both have large well-developed eyes and four distinct flying wings. But there’s one sure way to tell them apart. Dragonflies at rest hold their wings straight out from their bodies; damselflies usually fold their wings over their bodies like butterflies.

Finally, let’s wrap up our short selection of insects by looking at the “true flies” of the order Diptera. True flies are unique because they have only one set of flying wings; the other pair is modified into tiny clubs that act as stabilizers. Like Odonata, true flies have large, well-developed eyes that take up much of their heads. One of the most well-known is the ubiquitous housefly, but if you spend time outside you’ve likely met its biting cousins, the horsefly and deer fly. Females of the latter two have sharp stabbing mouthparts like those of mosquitoes, which are another type of true fly. (Crane flies, large true flies with long, thin legs, are often mistaken for mosquitoes, but crane flies do not bite.) To make things more interesting, there are also syrphid flies, or hoverflies, many of which have yellow and brown stripes, which make them look like bees. However, syrphid flies have one set of flying wings and the stereotypical large eyes of true flies, and none of them sting.

There’s a lot to examine in the insect world, but if you grab a good field guide, focus on key features, and learn a few different ones each year, you’ll be on your way to identifying “which insect is it” in DuPage forest preserves in no time!

You Can’t Judge a Lepidoptera by Its Cover

You may at one point have heard that you can tell butterflies from moths by their colors, butterflies being more vivid than their drab nighttime cousins. But some moths, like the cecropia silk moth at the top, are just as colorful as any butterfly. So how can you tell who’s who? One way is to look at the antennae. In most cases butterflies (including the eastern tiger swallowtail at the bottom) have antennae with clubbed tips; moths’ antennae are feathery. 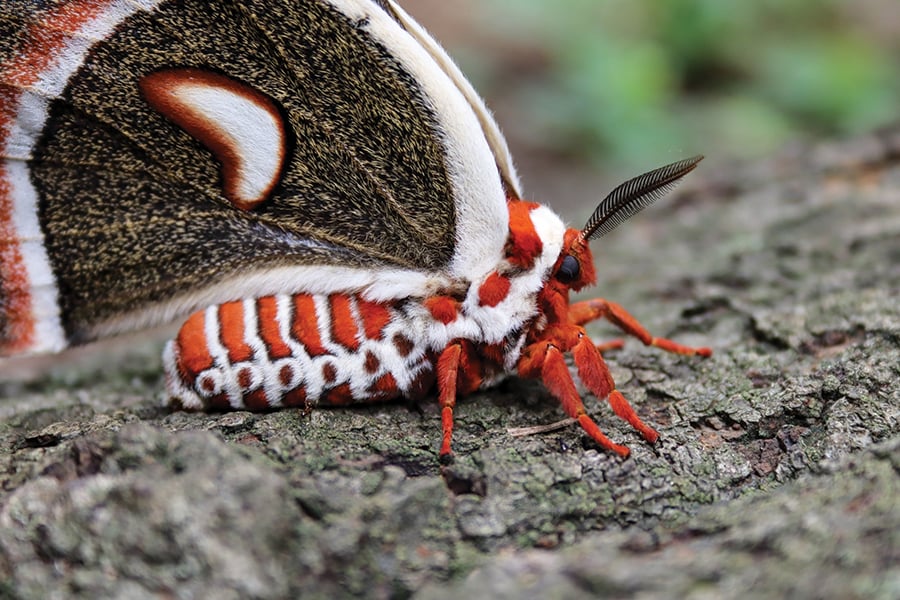 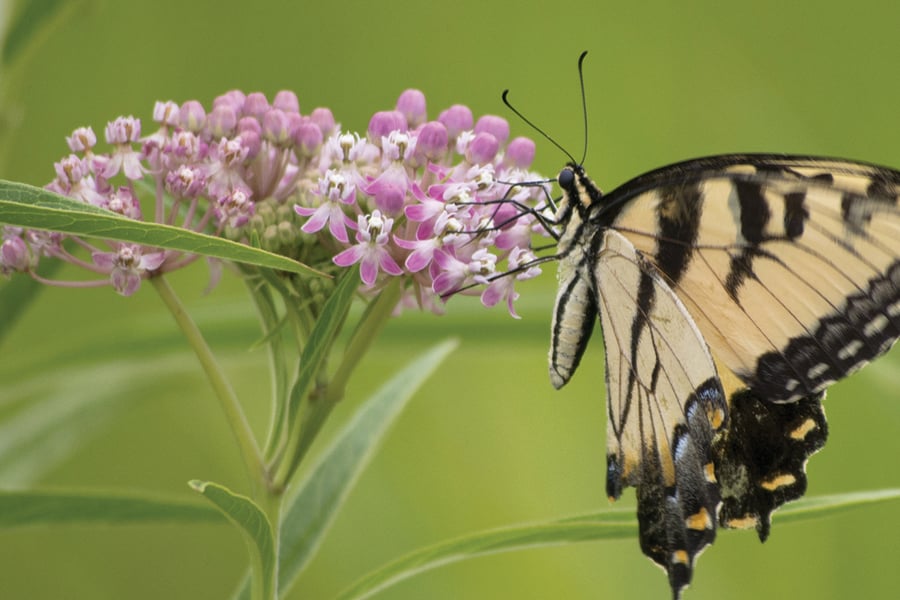 From the President
News & Notes
Planting for Small Spaces
Which Insect Is It?