There are so many things that make moms special — they go the extra mile for their kids, know just what they need, and are fierce protectors of their wee ones.

It’s no different in the natural world, where mom is usually boss when it comes to raising babies. We take a look at some of the best wildlife moms in the area.

Opossums are good mothers. They give birth to helpless young as tiny as bumblebees. They’ll carry up to 13 babies in their marsupium for more than three months, until they are old enough to emerge and ride on the mom’s back.

Once they get too large, they will fall off her back, usually one or two at a time. Opossums breed in late January or early February, and females have litters of seven or eight after just 16 days of gestation. Some may breed a second time in May.

Opossum moms carry their young in their pouch and then on their back.

A red fox mother dotes on her kits. She cares for them nonstop for their first two weeks, relying on her mate to hunt and bring her food. If something happens to him, it makes life hard for her, but she doesn’t abandon them. She takes over the tasks of finding food and raising them alone.

Foxes use dens — usually on the sunny side of hills or banks or in natural rock cavities — but only to raise their young. They mate in January and February and have a litter of four to 10 kits in March or April.

The fox mom will raise her young (usually five) together with her mate, teaching them hunting and other survival skills. They’re also playful parents, taking time to roll around and play with their kits. The male leaves in the fall. The kits leave when they’re six or seven months old, although females may remain with their mother for a year.

A red fox mom raises her young together with her mate, teaching them how to hunt and survive.

The wolf spider is a super mom! She will attach the egg sac to spinnerets and carry it with her until the eggs hatch. Once the babies are born, they climb onto her back and stay there for several weeks until they are fully developed, living off their egg yolks.

Wolf spider moms are known to exhibit aggressive behavior when carrying their egg sacs. This maternal behavior doesn't stop after the eggs hatch. 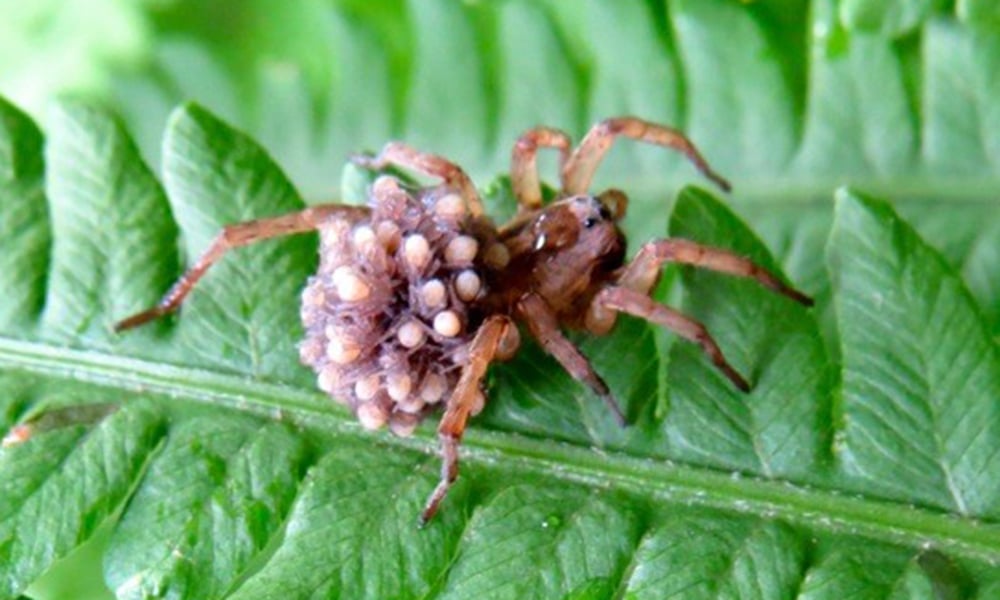 Wolf spider moms carry their young on their backs to keep them safe.

Striped skunk mothers raise their babies on their own without help from the father, who goes his own way after mating in the spring. After carrying the babies for up to 77 days, a litter of kits is born in the summer.

The mother starts teaching her young (usually 5 - 7) how to hunt at about six weeks of age. She’s very protective — if her young are threatened, she may spray without the usual warning. Kits often stay with their mom until the next mating season. 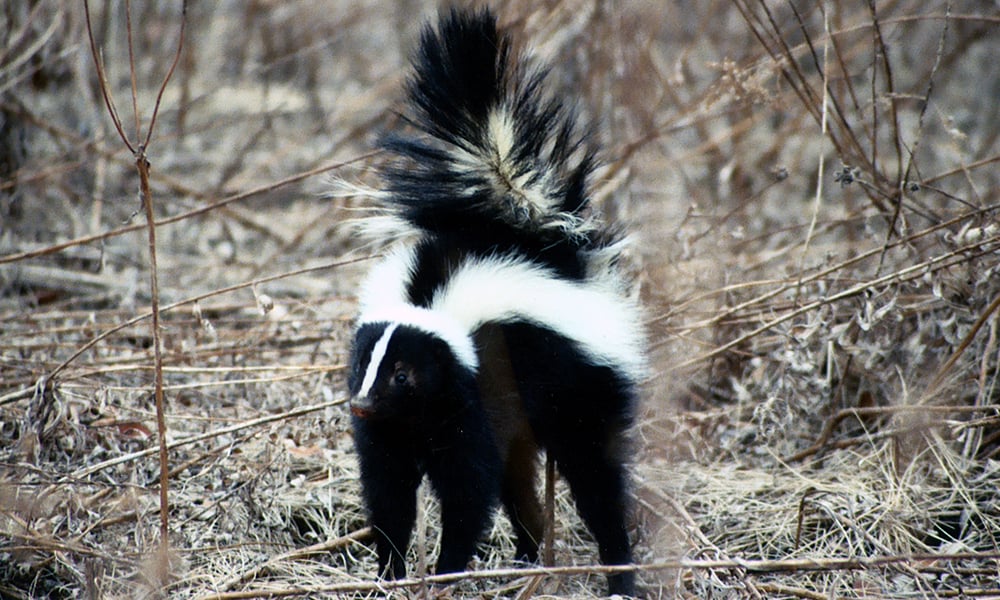 Skunk moms raise their young on their own and are very protective of them.

Northern raccoon females are generally mild-mannered, but when they’re mothers, they’ll fight ferociously to protect their babies. Kits (usually three or four) are born between March and August. When the babies are young, they stay in a nest while mom forages for extra food to make enough milk to feed them.

Mom raccoons hide their babies in safe spots, teach them how to survive on their own and fight off would-be predators. They guard their babies carefully for about four months until they’re ready to venture out on their own. Sometimes the babies stay with mom until it’s time for her next litter. 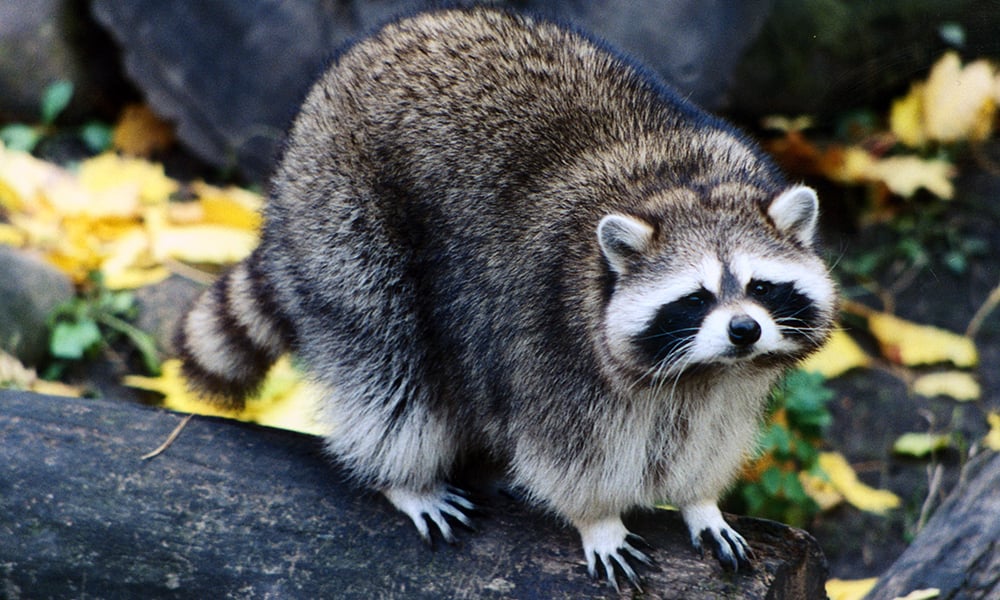 Raccoons are among the best wildlife moms.

A female mallard builds a nest out of breast feathers and twigs near a body of water. Mallard mothers lay 8 - 13 eggs and incubate them for a month. Once the ducklings hatch, they are taken to water for safety.

The mother is very protective of her young. She'll even pretend to be hurt by squawking and flapping on the ground to draw a predator’s attention away from her babies. If her ducklings scatter, she collects them back together. When they need sleep, she tucks them under her for warmth and protection, then tries to get some rest herself. Some ducklings will probably stay with her until the next breeding season. 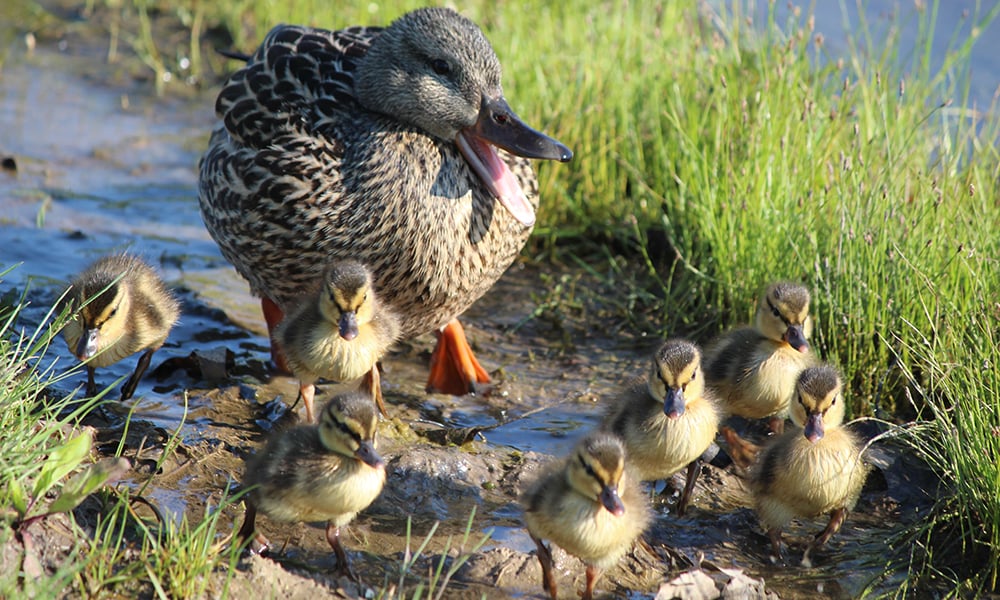 A Mallard duck mom and her brood.