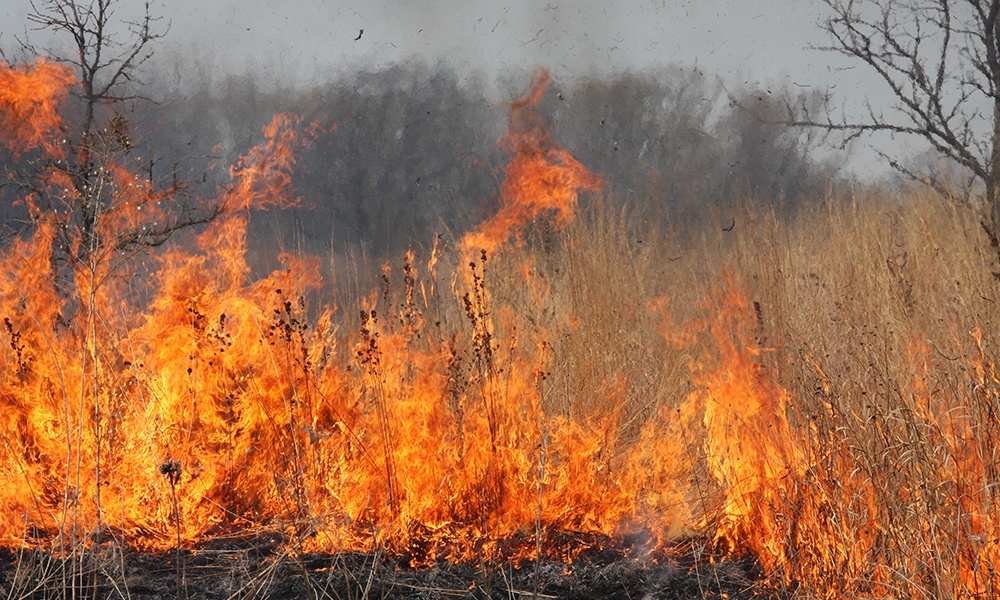 In my 22 years with the Forest Preserve District, some of my most cherished memories come from time spent away from my desk and along the prescription burn line. Prescription burns are one of the best tools the District has for keeping prairies, woodlands and wetlands healthy, and it uses them in spring and fall, treating 1,600 acres each year on average.

Prescription burns prevent dead grasses and leaves from piling up and cooling the soil, which can make it harder for seeds to sprout. They turn dried plants into ash, allowing nutrients locked inside to reenter the soil more quickly and fertilize new growth. But prescription burns also knock back newly sprouted invasive and unwanted brush.

What makes plants “unwanted”? To ecologists, habitats should contain an abundance of different types of “native” plants, species that have grown in an area for centuries and are well-adapted to weather and soil conditions. This plant “biodiversity” in turn supports diverse types of wildlife.

But when fast-growing plants from other regions (European buckthorn or Asian honeysuckle, for example) arrive and quickly spread, the sunlight, water and space they steal from native species causes that diversity to dwindle. Fortunately, unlike natives, which developed side by side with sporadic fires over millennia and have deep roots and thick bark to withstand the heat, nonnatives are simply not built to tolerate fires.

The “prescription” in all of this is the set of directives natural resource managers develop to decide where and when to burn. First, the District reviews its priority list. At the top are areas it’s required to burn because of agreements it has with other agencies. Next in line are high-quality areas it hasn’t burned in more than three years or habitats it needs to burn to clear away seedlings from invasive brush. A number of ecological conditions can move a site up or down this list.

The District also considers resident wildlife when it develops a prescription. Animals are naturally adept at avoiding the slow burning fires, which leave behind soils barely warm to the touch. Still, if an area is home to a rare species, such as Blanding’s turtles, or to populations of frogs or salamanders, as an added precaution the District won’t burn during the spring breeding season.

After the District decides where to burn, it obtains permits from the Illinois Environmental Protection Agency and local fire departments, if needed, and mails postcards to people who live within 1,000 feet of each burn unit. It also ensures burn crews have proper training and its “burn bosses” have advanced certifications. After all, on the morning of a scheduled burn, it’s the burn boss who reviews the site’s prescription and decides if it’s safe to proceed. This part of the prescription addresses elements like humidity and the forecast for rain. (If you’ve tried to start a campfire, you’ll know moisture makes it difficult.) It also looks at the speed and direction of the wind. (If there’s a busy road or school east of the site, we can’t burn with winds out of the west.)

If a burn is a go, the District notifies fire and police departments, the county sheriff’s office, and residents who requested calls. Burn crews don fire-retardant coveralls, helmets with shrouds covering the neck and face, and heavy-duty gloves. From start to finish, which can take three to six hours, everyone works as a team, closely following the directions of the burn boss and crew leaders. Torch operators ignite dry vegetation along the perimeter, and the crews carefully monitor the fire as it spreads across the burn unit. Line tenders stand by with water pumps and tools to extinguish flames that persist once the main fire has run its course or that spark outside of the burn unit. To date, nearly 20 current District employees have logged more than 100 burns (a club of which I’m proud to be a member) and several have participated in more than 200! 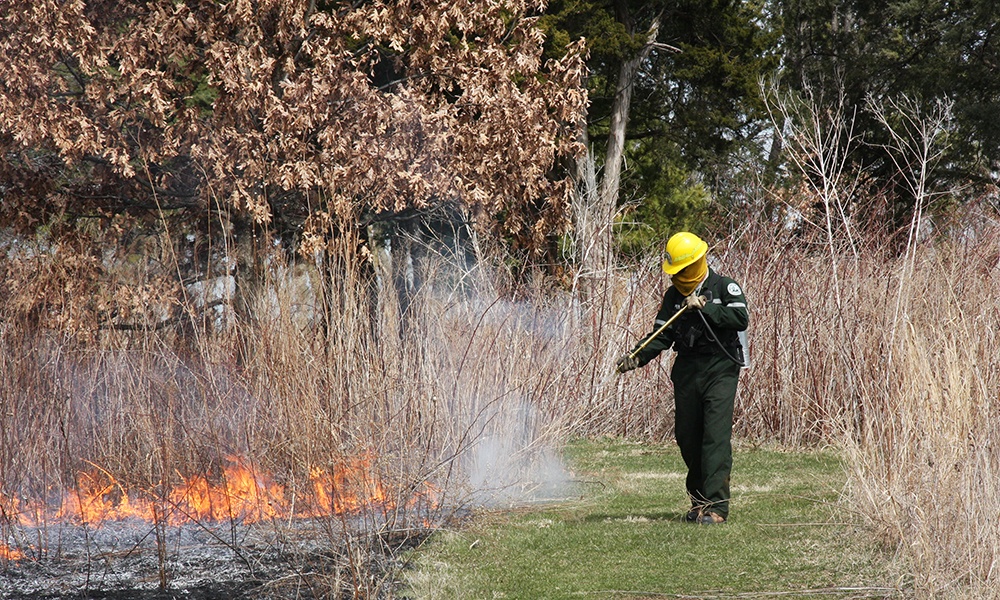 The line tender puts out fires along the edge of a burn.