Grounds Management Roads Crew Paves the Way to Our Preserves 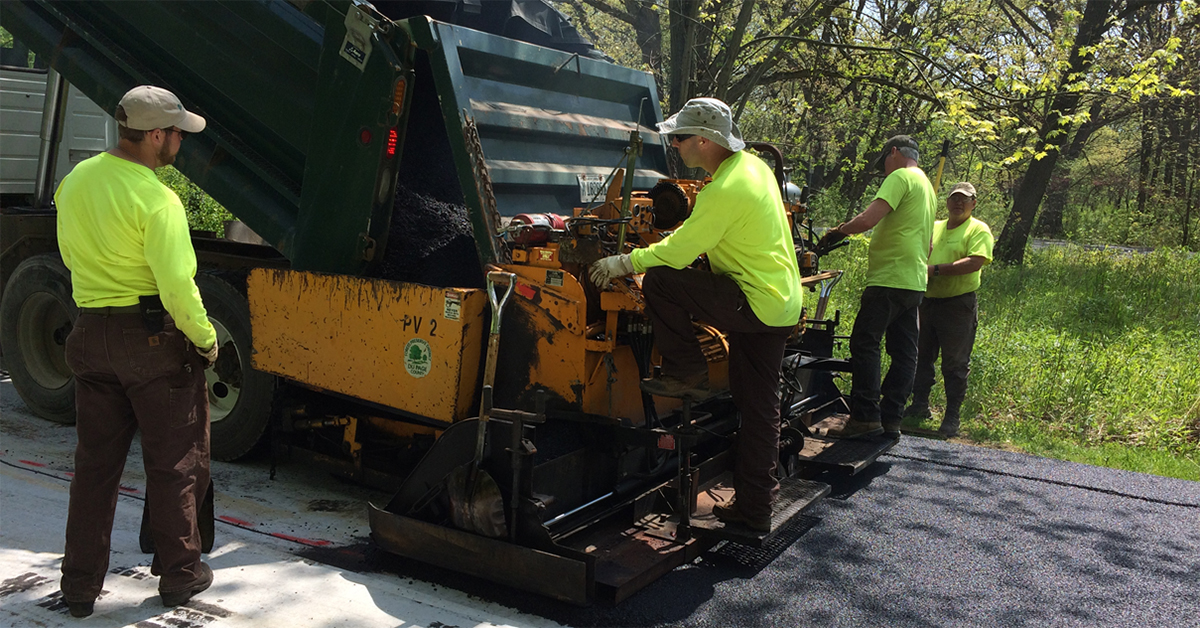 They’re faster than falling snow, more powerful than a pothole, and able to clean a blocked storm sewer in a single bound.

They’re the superheroes of the Grounds Management Roads Crew.

This team of nine keeps the Forest Preserve District’s parking lots and roadways in tip-top shape year-round in addition to clearing waterways of logjams and debris and forests of invasive species. 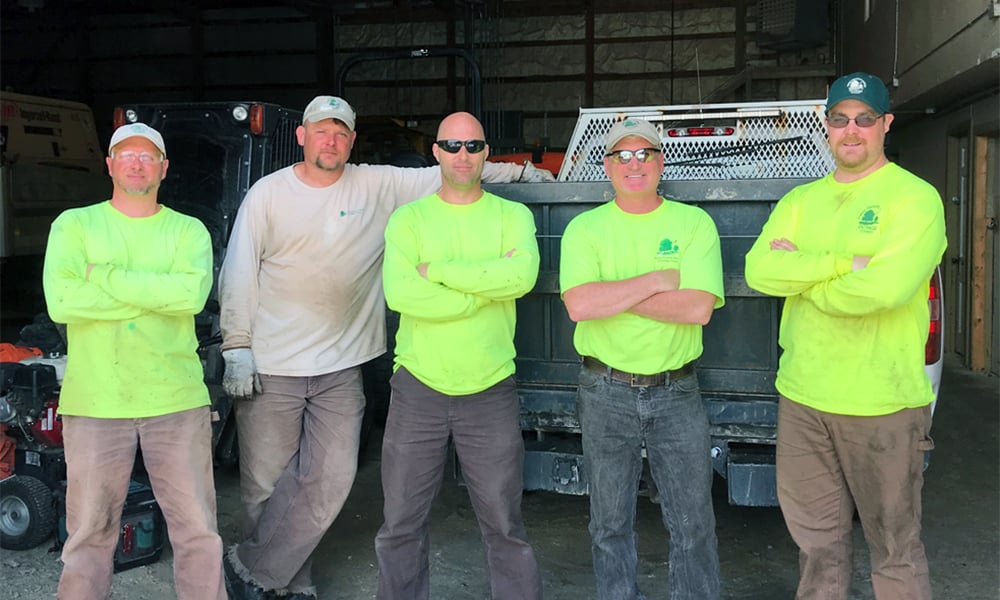 The crew of three heavy equipment operators, five preserve maintenance workers, and one foreman cover a lot of ground — literally. They’re responsible for maintaining roughly five acres of concrete or permeable-paver spaces, almost 60 acres of gravel parking lots and roadways, and another 144 acres (or 6.3 million square feet) of asphalt surfaces that are part of the Forest Preserve District’s nearly 26,000 acres of open space.

They’re able to accomplish all of this by following a jam-packed, strategic annual maintenance schedule that coincides with the seasons and takes advantage of every available opportunity.

In early spring they spend a few weeks clearing Salt Creek and the East and West branches of the DuPage River as they flow through DuPage forest preserves, unblocking logjams and removing debris to make sure they aren’t causing any flooding issues for adjacent homeowners or blocking the way for kayakers or canoeists. 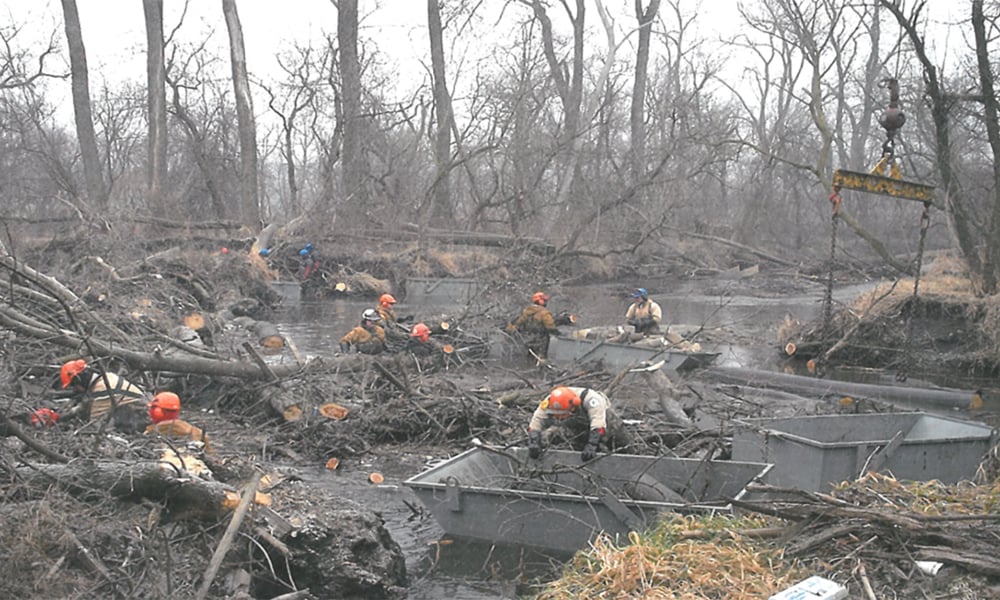 This large river cleanup project at the East Branch required the crew to use pans and a crane to remove wood debris. 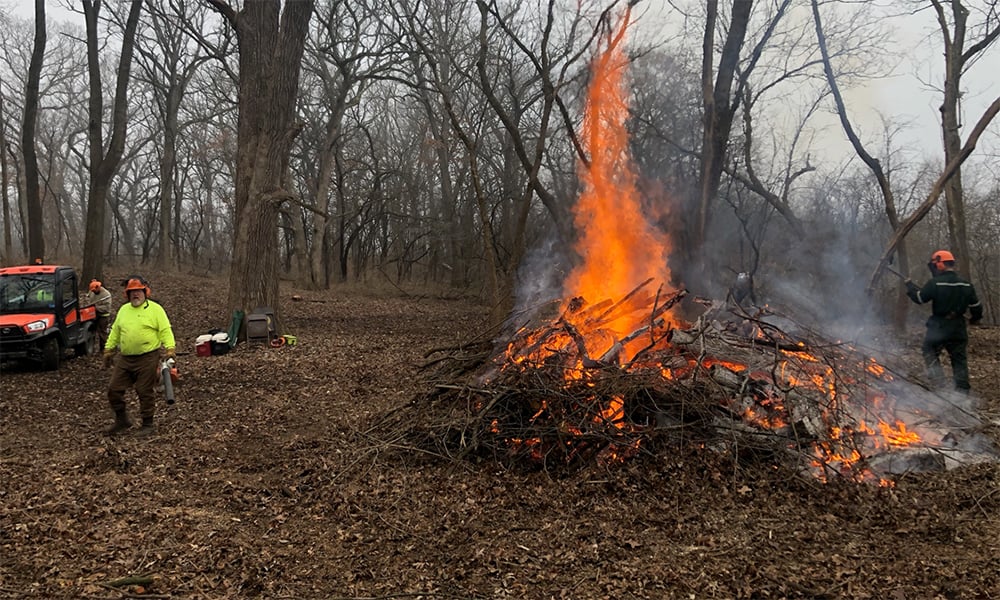 Crews burn cleared invasive brush in areas that are hard to access with chipper equipment.

After finishing their spring clearing projects, the crew begins aggregate roadway maintenance. They go over roadways with graders, adding aggregate gravel to smooth out potholes and fix erosion issues. The crew also does what they call “spring cleanup” to get things ready for the summer, replacing parking bumpers as needed and doing turf restoration to areas damaged by snow removal. 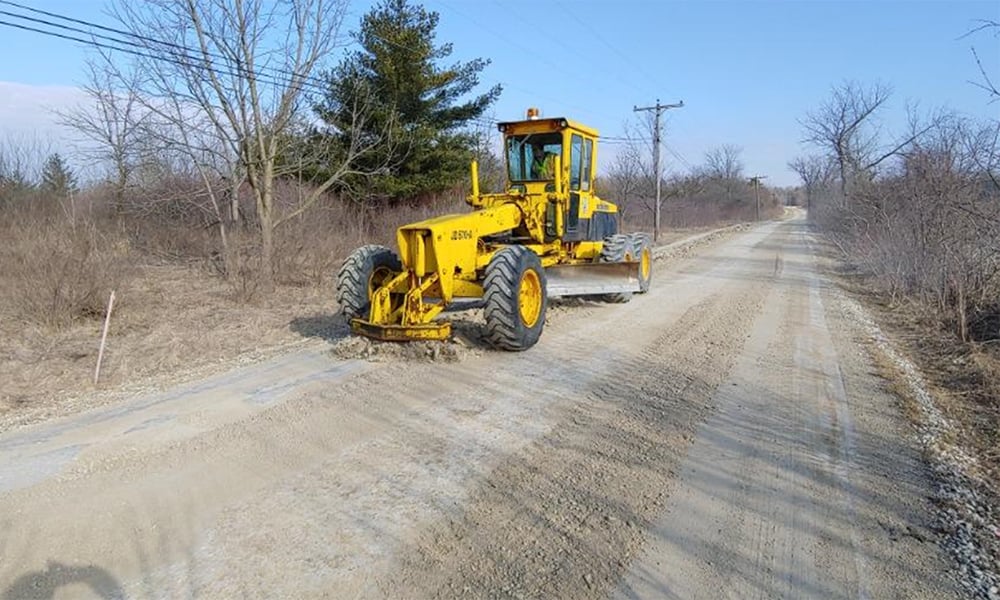 This grader purchased new in 1976 has served the District roads crew well for over 40 years.

Later in the spring and into early summer, the crew begins filling cracks and patching spots in parking lots that will be seal coated over the summer. The crew uses roughly 500 tons of asphalt each year just for patching. They continue patching and filling throughout the District until they can begin seal coating once nighttime temperatures reach higher than 50 degrees. 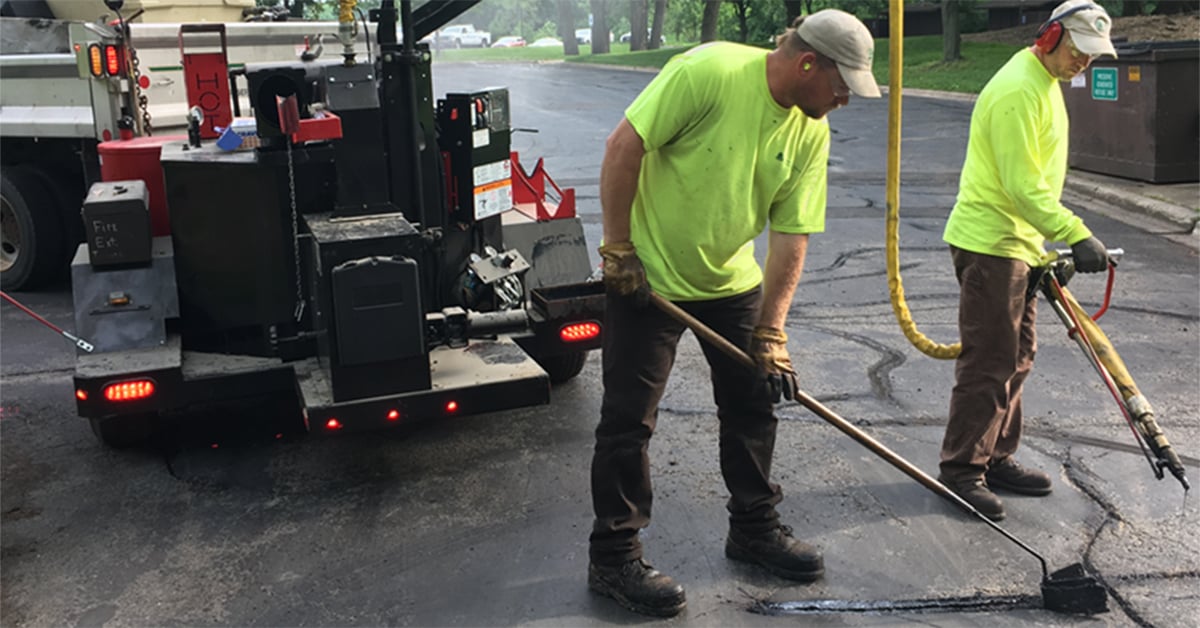 After a routing machine opens up the cracks, crews fill them with hot material they squeegee it into the cracks.

Each year the crew seal coats about 1.2 million square feet, using roughly 42,000 to 48,000 gallons of seal coat. They typically apply two coats of material in an effort to maintain a five-year maintenance cycle. 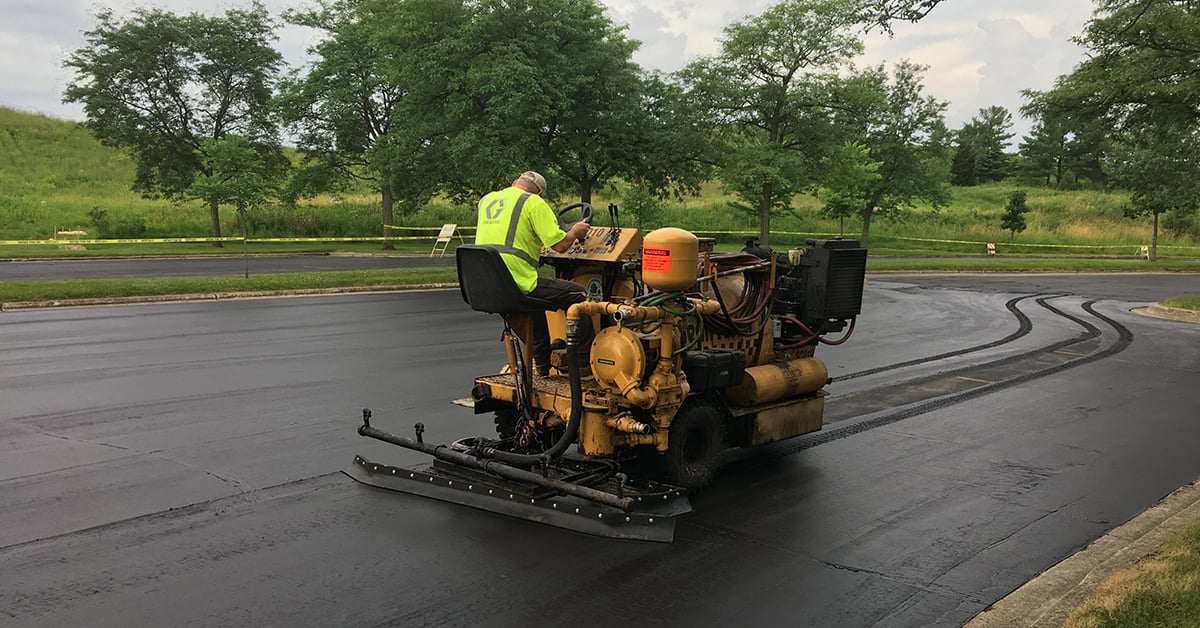 Crew members use the two squeegees on the back of this seal coat machine to seal coat a parking lot.

Of course after sealing comes striping and marking the areas using low-VOC paints.

Asphalt projects take up the remainder of the summer months and continue into October or November, when the asphalt plant shuts down for the season. All the while crews manage weeds growing alongside parking lots and through cracks. 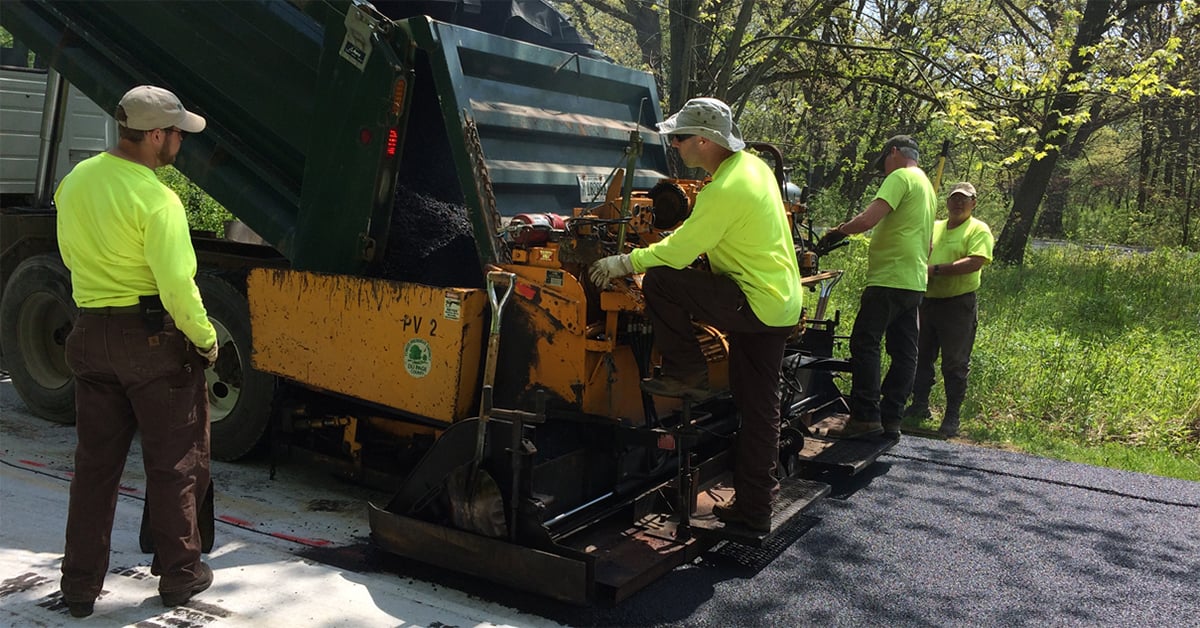 To clean tools and lubricate truck beds and tailgates so asphalt doesn’t stick to them during projects, the crew uses Bioslide, an all-natural biodegradable product instead of diesel fuel, which is commonly used in the industry.

District crews also sweep roads and parking lots at regular intervals to keep pollutants and contaminants out of storm sewers.

In late fall the crew inspects storm sewer lines and drainage pipes to ensure they aren’t blocked or in disrepair. They use special equipment, including a van equipped with a four-wheel drive camera that can move through pipe interiors to show their condition and send out a GPS signal of blockage locations so crews can find and fix them.

This van comes equipped with a camera that allows crews to see the condition of the inside of sewer pipes (shown inset).

The crew sometimes deploys a Vactor truck (rented or borrowed from DuPage County through an intergovernmental equipment-sharing agreement) to clear sewer lines of mud, sticks and debris with high-pressure water; it even cut roots that get in the lines. The truck also cleans storm sewer basins and keeps contaminants and pollutants out of waterways.

Winter work can be summed up in four words: snow and ice removal. The crew uses a wide array of equipment and extra staffing when necessary to keep the parking lots accessible and safe for visitors. 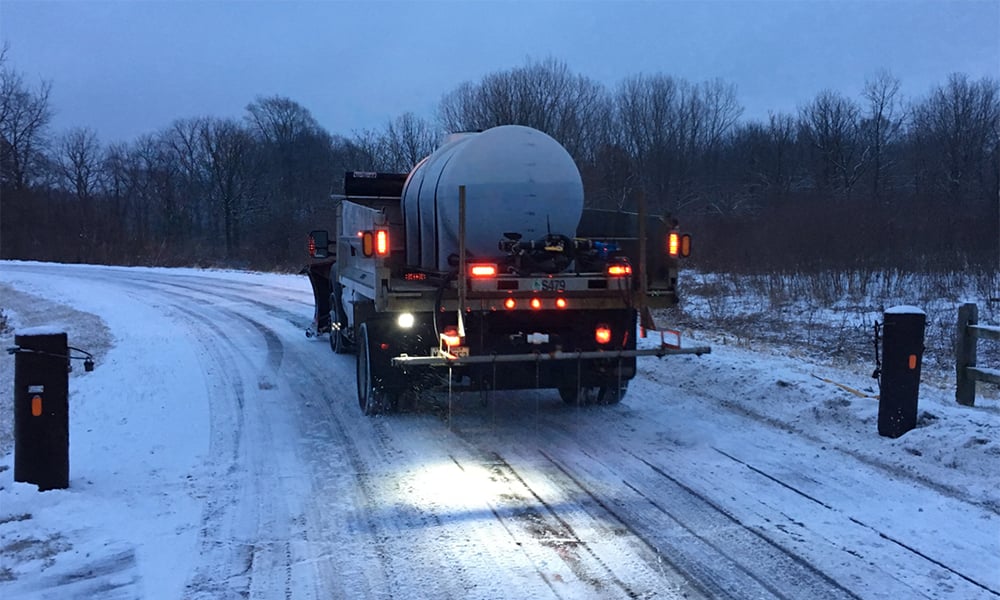 Rather than salt, the roads crew uses an environmentally friendly corn-based liquid deicer containing calcium chloride, which is safer for plants than salt and safer for bricks and concrete than magnesium or sodium chlorides. It also has an oxygenizer to help it evaporate once applied, preventing runoff in waterways. The Forest Preserve District continuously searches for newer and better deicer products.

Besides the superhuman amount of work the crew accomplishes each year, in true everyday hero fashion, they’re most proud of their efforts to do it in an environmentally friendly way. Despite being in an industry that is not typically thought of as “green,” the roads crew makes great strides to efficiently maintain the Forest Preserve District’s assets in a way that we believe is unmatched by any organization in terms of green initiatives in road maintenance.