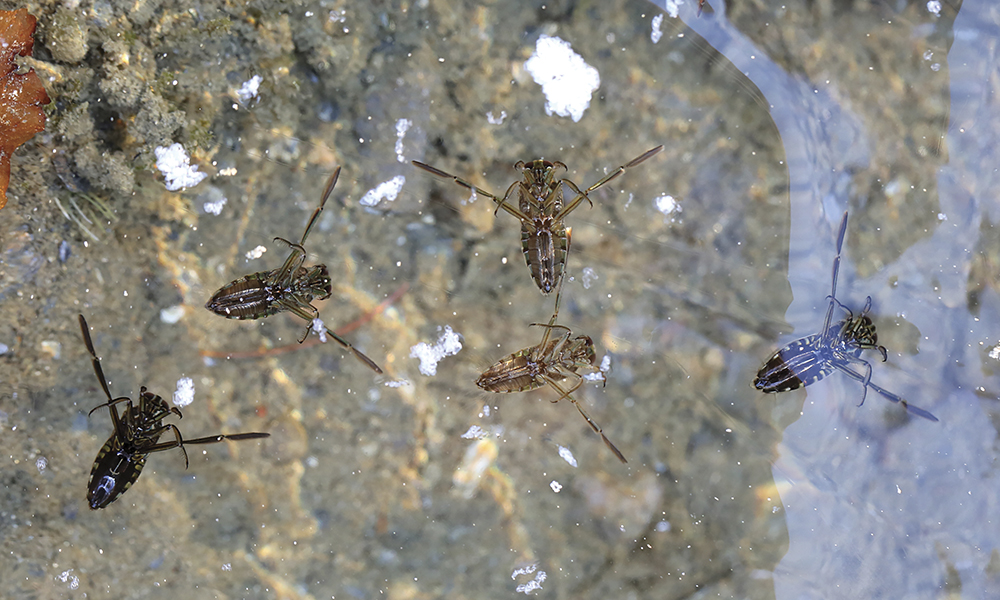 After the last leaves fall and the cold winds start to blow, winter settles across DuPage County. Ground squirrels and woodchucks hunker down in underground burrows.

Tree squirrels and deer remain active, continuously searching for shelter and food, and adventurous people bundle up to enjoy snowshoeing and cross-country skiing in the forest preserves. Savvy anglers are out because they know the fish are still biting, but what else is going on under the ice?

Below the frozen surface, the eggs and larvae of dragonflies, damselflies, stoneflies and mayflies burrow in mud and other organic matter. Most of the adults of their kind have died off. Within the ice itself, water striders, backswimmers and similar insects that live on the surface of the water spring through fall hang in pockets of trapped air. This drop in insect activity lowers the food supply for fish and other animals and can have a big effect on survival, but underwater plants can affect wintering aquatic wildlife, too. 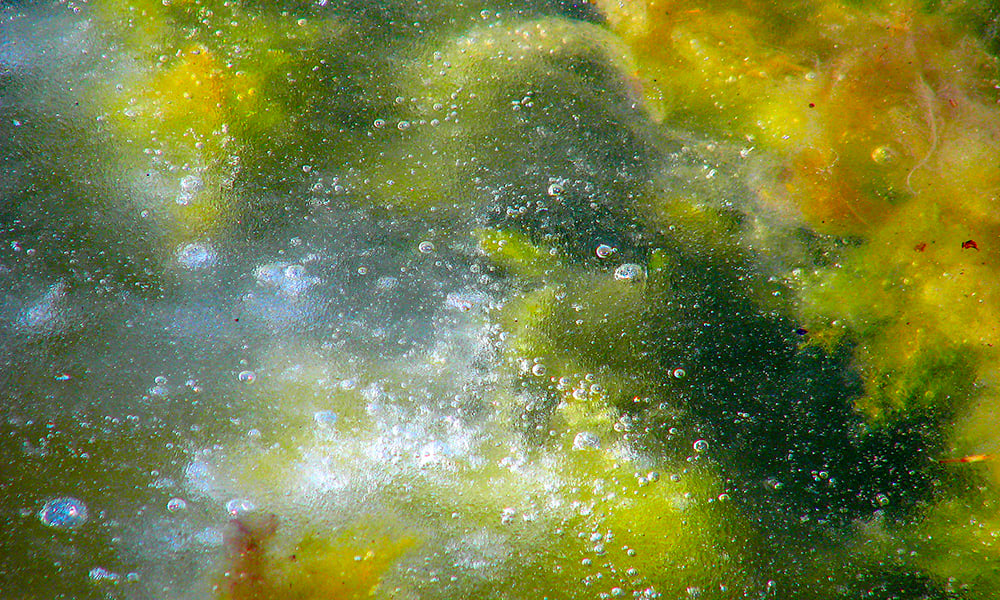 As long as sunlight can penetrate the ice, algae can continue to survive. ©Katie Shoek

Aquatic plants and algae continue to grow under thin layers of transparent ice, but when thick ice and snow block the sunlight, they die back to the roots or become inactive spores. As all of this green stuff decays, it uses up dissolved oxygen — microscopic bubbles of oxygen that are mixed in with the water. Oxygen in the air can make its way into open water to replenish the supply, but when lakes and rivers freeze over, that supply’s cut off, which can be a problem for animals that need dissolved oxygen to survive.

Fish absorb oxygen in the water through their gills. Without it, they suffocate. In winter, turtles and frogs living under the ice absorb it through their skin. For many aquatic animals, a decrease in dissolved oxygen this time of year can be as challenging as a decrease in water temperatures, but they have some incredible adaptations that help them survive the harsh conditions.

Fish, turtles and frogs are “ectothermic,” or as some call it, “cold-blooded.” Unlike birds and mammals (including us humans), they can’t generate enough heat on their own to maintain optimal internal body temperatures. Instead they rely on heat from external sources, such as the air and water, to get their bodies moving (one reason a frog may not quickly hop away from you on a chilly day). When air and water temperatures, food supplies, and oxygen levels drop low enough, ectotherms survive by entering “torpor,” a period of inactivity lasting days or weeks at a time that allows them to conserve energy.

Some snapping turtles may share winter burrows and lodges with muskrats and beavers, but many spend winter below the ice. ©Cliff Fairweather, Long Branch Nature Center

Largemouth bass and other fish move downstream or to the deeper parts of a lake, where the water’s warmer. To compensate for scarce food supplies, their metabolism slows. The amount of dissolved oxygen is a bigger limiting factor for fish survival, though. Thick ice, heavy snow, decaying plants and shallow water can significantly deplete oxygen by mid- to late winter, but by entering topor fish are able to endure.

Sluggish adult snapping turtles may spend winter in muskrat burrows or beaver lodges, but snappers born earlier in the year burrow in the bottom of shallow waters. There, they remain like motionless rocks until the spring thaw. Like other DuPage turtles, snappers adapt to the cold by entering a state called “brumation,” which is similar to hibernation. During brumation, metabolism drops so low that turtles do not need to eat or use their lungs to breathe for months at a time. The latter adaptation is crucial because they may not be able to surface for air once the ice thickens. Their bodies absorb oxygen in the water through special tissues in their throats and near their tails (so in a sense they “breathe” through their rear ends this time of year!) 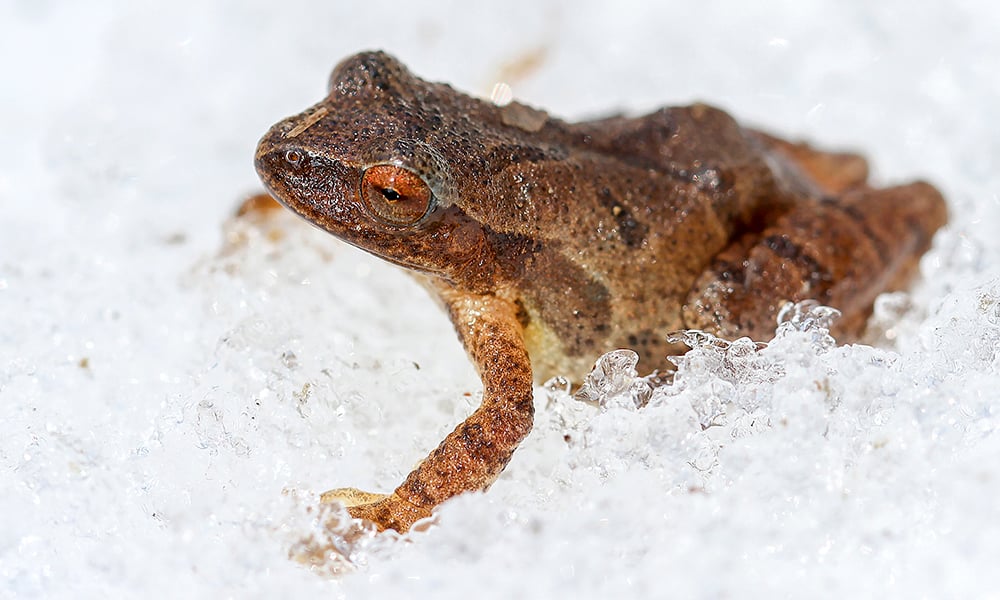 The spring peeper is so well-adapted for winter that even if its body fluids freeze and its heart and breathing stop, it can thaw unharmed in spring. ©naturallycuriouswithmaryholland.wordpress.com

Aquatic frogs such as American bullfrogs spend winter nearly motionless at the bottom of rivers and lakes. Their metabolism slows greatly, and they only occasionally move. They may seek some shelter in the mud, but because they need to absorb oxygen through their skin, they would suffocate if they buried themselves completely. Spring peepers, on the other hand, overwinter on land. Like other frogs, they have high concentrations of glucose, a sugar that acts like a natural antifreeze and prevents ice crystals from forming inside cells — and organs from freezing. But spring peepers take this “freeze tolerance” survival strategy to the extreme. As glucose floods their bodies, their hearts stop beating, their blood stops flowing and they no longer breathe. Amazingly, when the air temperature warms, these “frogsicles” thaw unharmed.

The next time you’re ready to fuel your own inner furnace with metabolism-boosting activity, bundle up and head out to a DuPage forest preserve. And if you pass a frozen pond or stream, think about the plants and animals below and the amazing adaptations that help them survive winter under the ice.

Backswimmers survive winter within the protective space of an air bubble.  ©naturallycuriouswithmaryholland.wordpress.com 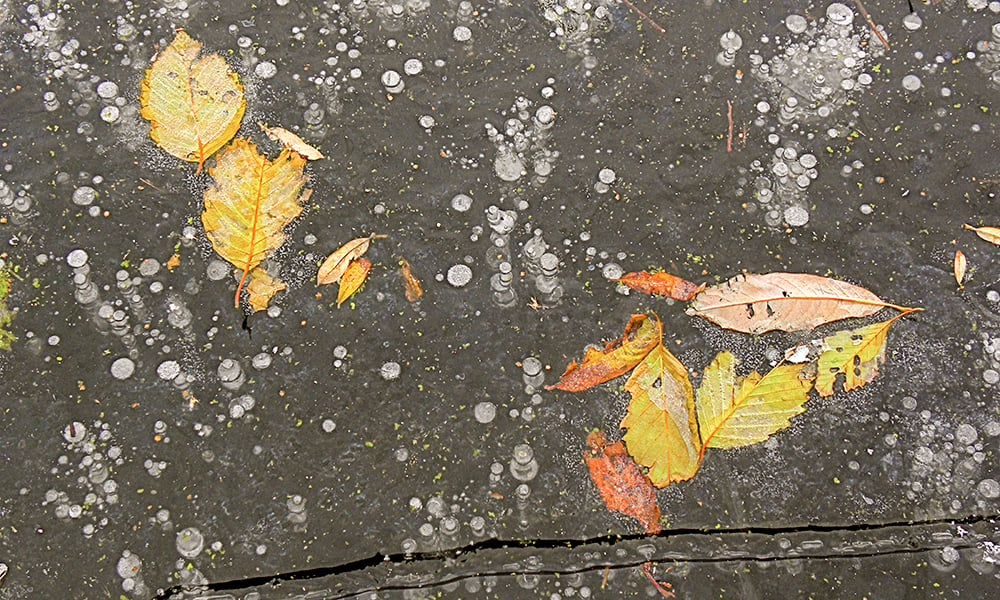