A Moment for Millipedes

A Moment for Millipedes 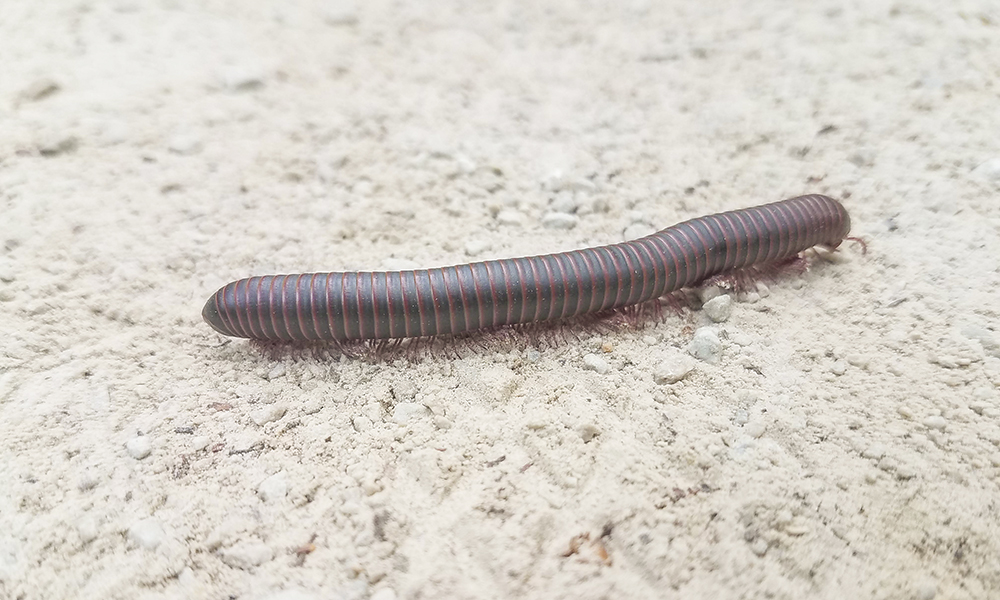 The next time you hit the trails at a DuPage forest preserve, keep an eye out for the North American millipede, Narceus americanus, also called the “iron worm” for its armored appearance.

This large species of millipede, native to the eastern United States, can reach up to four inches long. They are dark gray with distinct dark red bands in between each body segment. They have one pair of antennae and chewing mouthparts. 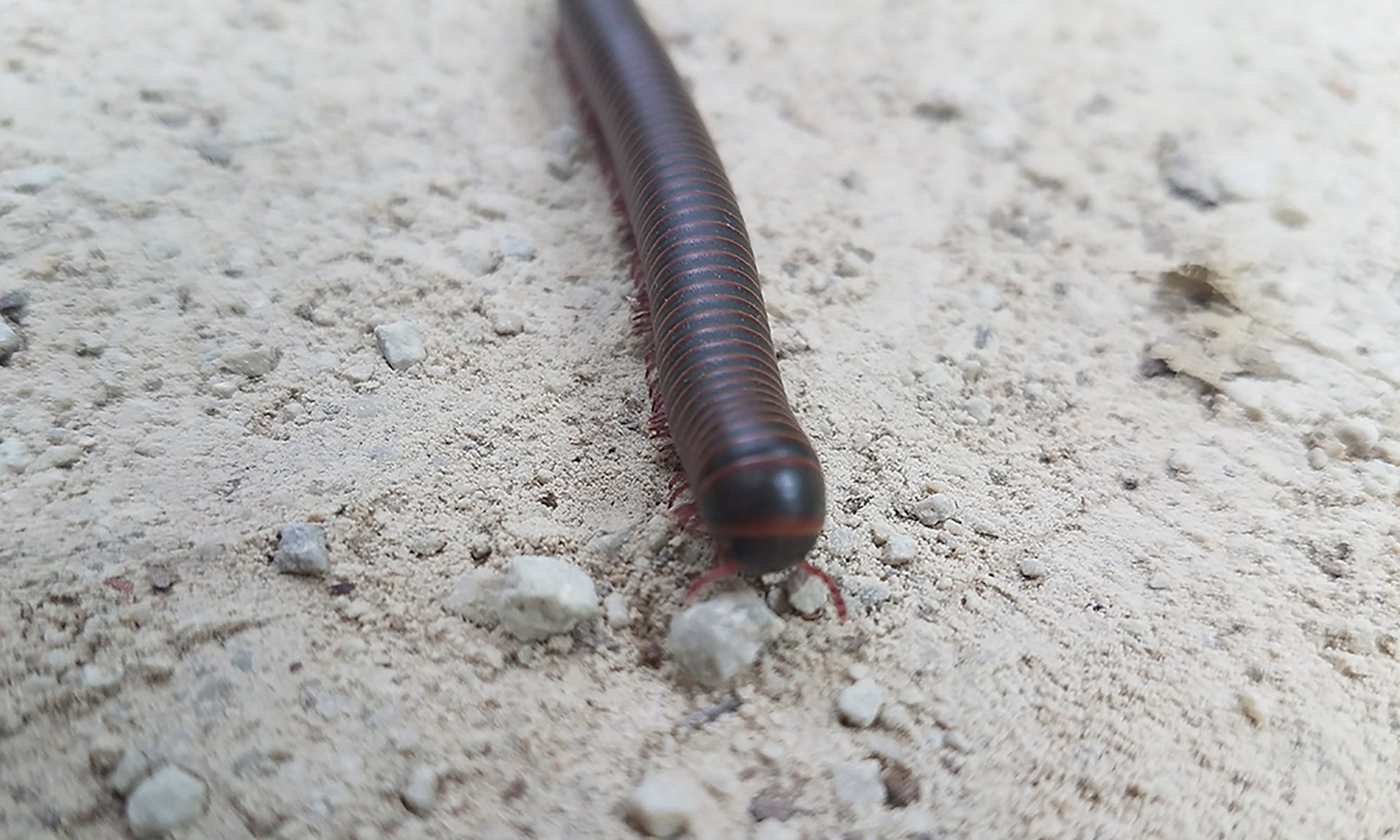 Despite their name “milli” meaning 1,000 and “pede” meaning foot, millipedes do not actually have 1,000 feet. If you look closely, each segment of its long body has two pairs of legs. They have between 80 and 400 pairs of legs, which are designed to help them push their way through soil and vegetative litter.

Their body size is directly related to their age. When a millipede hatches from an egg, it looks like a miniature version of the adult stage. Each time it “molts,” or sheds its old skin, it usually adds another segment to its body with two pairs of legs.

Their sets of legs move one after the other giving them a wave-like appearance in motion as they move forward, backward and sideways or burrow into the ground. 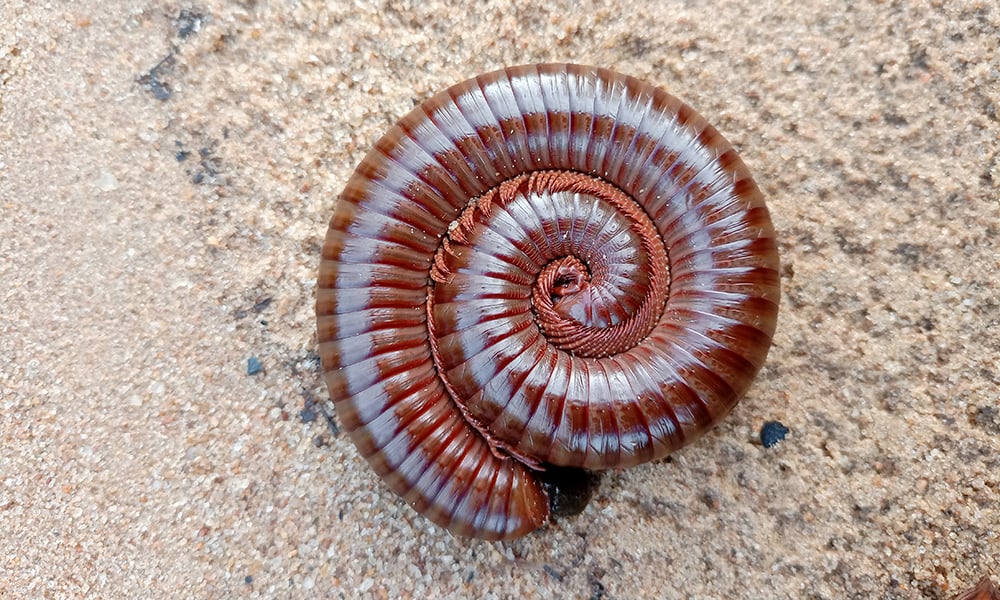 A millipede curled up. Photo by Aimeabibis CC BY-SA 4.0 via Wikimedia Commons

In addition to their tough exoskeleton armor, a millepede’s other defensive moves include curling up its body into a tight spiral and secreting a foul-tasting, bad-smelling liquid when threatened. This liquid can irritate a person’s eyes and skin, so it’s best to observe millipedes without handling them.

Millipedes hibernate in soil and leaf litter over the winter. The adults emerge in spring to mate and lay eggs. A female North American millipede lays a single egg in a cup made from chewed up, regurgitated leaves (Most other millipede species can lay hundreds of eggs at a time.) The female will then protect the egg by curling her body around the nest. The egg hatches into a tiny millipede after several weeks, and it can take 1-2 years to reach adulthood. Some North American millipedes have been recorded to live up to 11 years.

Millipedes prefer old-growth wooded areas where they live in dark, damp areas under logs and rocks. They eat decaying organic material including rotting wood and leaves on the forest floor. This makes them excellent nutrient recyclers along with other forest floor decomposers including beetles, slugs, worms, insects and fungi. 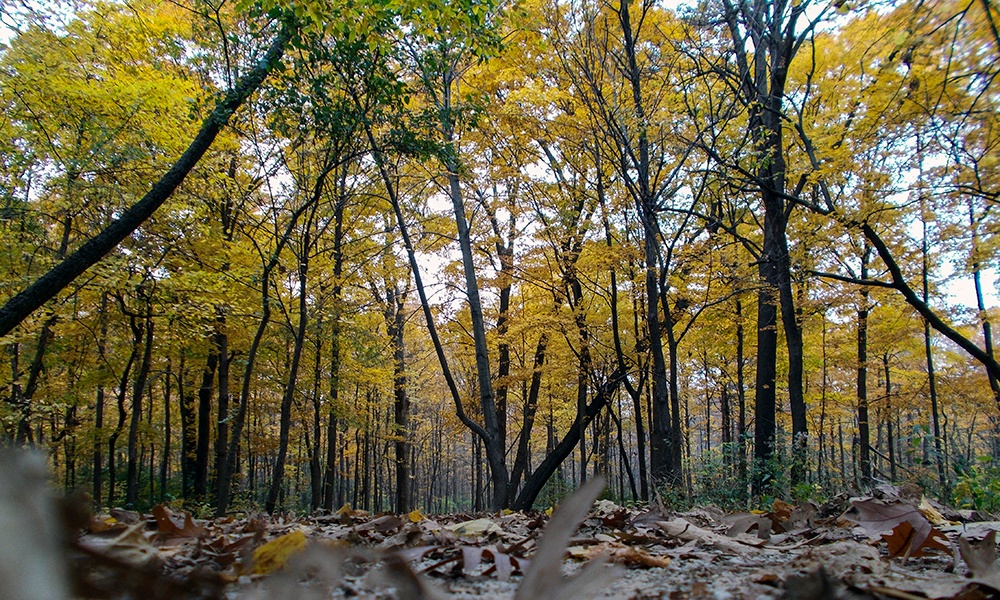 There’s fossil evidence that millipedes were the earliest animals to breathe air and make the move from water to land. A fossil found in Scotland, Pneumodesmus newmani, dates back 428 million years and is the oldest fossil specimen with spiracles for breathing air. 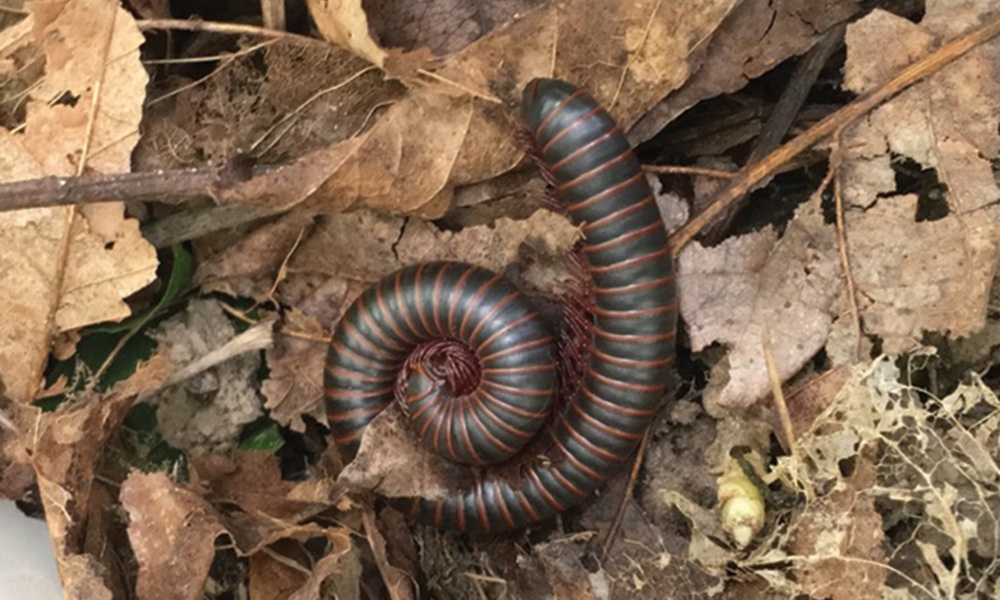