Cold Weather is for the Birds

Cold Weather is for the Birds 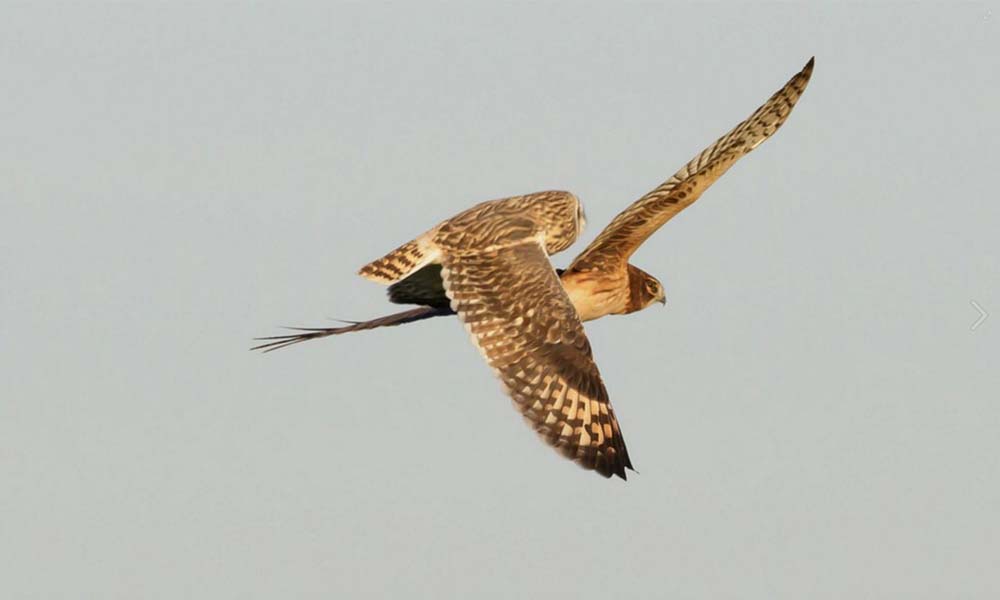 Each winter, DuPage County and northern Illinois receive two visitors from the north who use this area as their warmer wintering grounds. One may think that sounds crazy, calling northern Illinois warm, but where these birds come from, temperatures in winter can average below 30 degrees Fahrenheit.

Northern harriers and short-eared owls are two raptor species that call northern Illinois home during the winter months. Short-eared owls are light brown in color, heavily streaked with a conspicuous facial disc. These birds get their name from the short feather tufts that appear on top of their head when they are frightened or curious. Most often these tufts lay flat on top of their heads.

Northern harriers are not owls but are arguably the most owl-like of raptors. They are long, slender raptors with banded tails and a large, white patch on top of their tails. Females and juveniles are mostly brown in color. Males are gray above and whitish below and are often referred to as “gray ghosts.” Like short-eared owls, northern harriers have a facial disc. 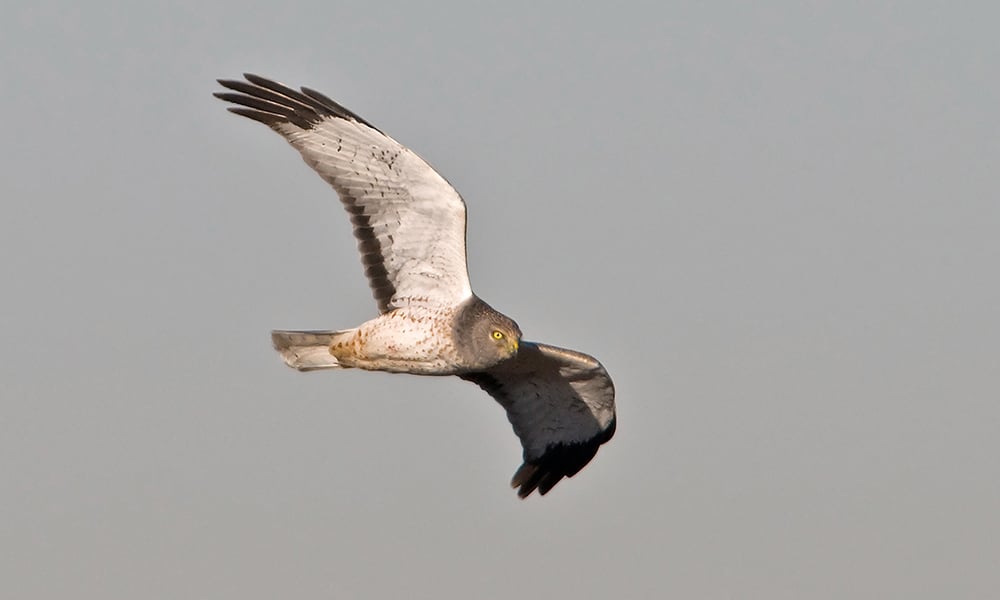 Male northern harriers are gray above and whitish below and known as "gray ghosts."

The Synergy of the Species

These two birds share similar habitats and tend to share roosting (resting) sites. Because of this overlap, they have an interesting relationship and have evolved together both anatomically and behaviorally. Unlike most hawks and owls, they both nest on the ground. 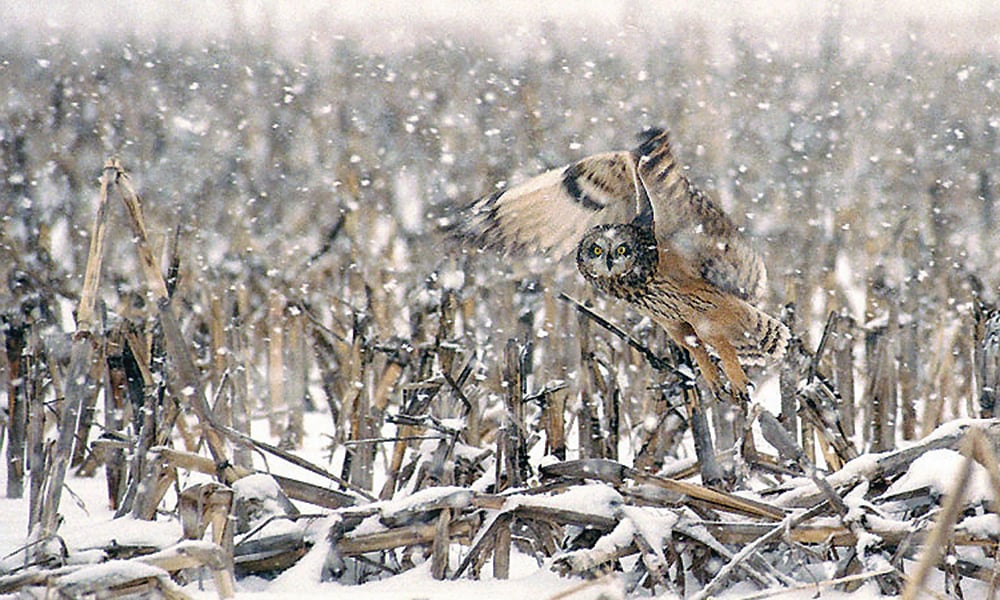 A short-eared owl takes flight from a field during a snowstorm.

As mentioned, both birds have facial discs, or feather ruffs, allowing them to hunt for prey using their hearing. This type of hunting is typical for owls, but uncommon for raptors, which mainly rely on sight to hunt. Northern harriers hunt during the daytime and short-eared owls hunt at dawn and dusk, which is atypical for most owl species. They work the same territory and often compete for the same prey. Sometimes they will even steal from each other, a behavior known as kleptoparasitism.

When conditions are harsh, these birds may exhibit kleptoparasitism, a behavior displayed by birds looking for an easy meal. One bird will chase another until it drops the food they are carrying, allowing the chaser to swoop in and grab they prey caught by other bird.

A northern harrier (top) and short-eared owl survey the area for prey. Both birds hunt in grasslands.

It is always a delight to see northern harriers and short-eared owls in DuPage County during the winter months as they are both endangered species in Illinois. Both birds’ populations have decreased dramatically due to immense habitat loss of open marshlands and grasslands. Norther harriers were also affected by DDT in the 1950s and 1960s.

How to Tell Them Apart

Since both birds can be brown, how do you tell the difference from a distance? Both birds fly low over the tips of the grassland in search of prey, but there are a few key traits distinguish the two. Short-eared owls are lazy fliers who resemble giant moths rather than a bird. Northern harriers, on the other hand, are sleek-looking hunters that fly with a little more intent. Harriers also have that distinct white spot on their rump. That is a good “tell” as I like to call it.

A northern harrier in flight.

What can you do to help northern harriers and short-eared owls? The best way to help these birds is to give them space. If you’re lucky enough to see one of these birds in the wild, stay on trails and do not chase or approach them. We’re very lucky to be able to see these two incredible species, but they need to be able to hunt on the ground with very little human interaction. A birder’s presence should not change the bird’s behavior. If a bird is reacting to you, then you’re too close. Causing birds to flush stresses the birds and puts them in danger. 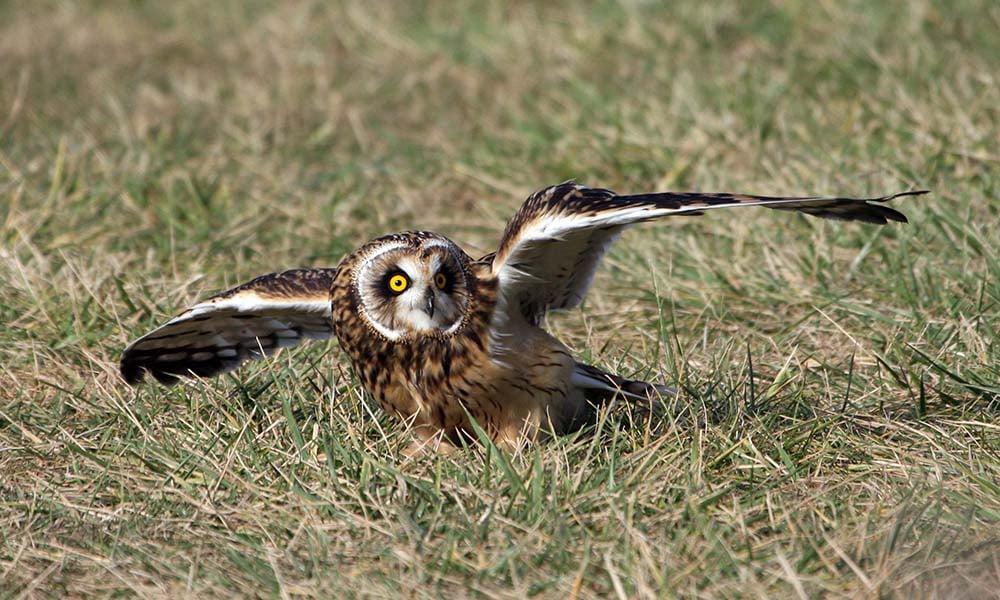 A short-eared owl on the ground getting ready for takeoff.