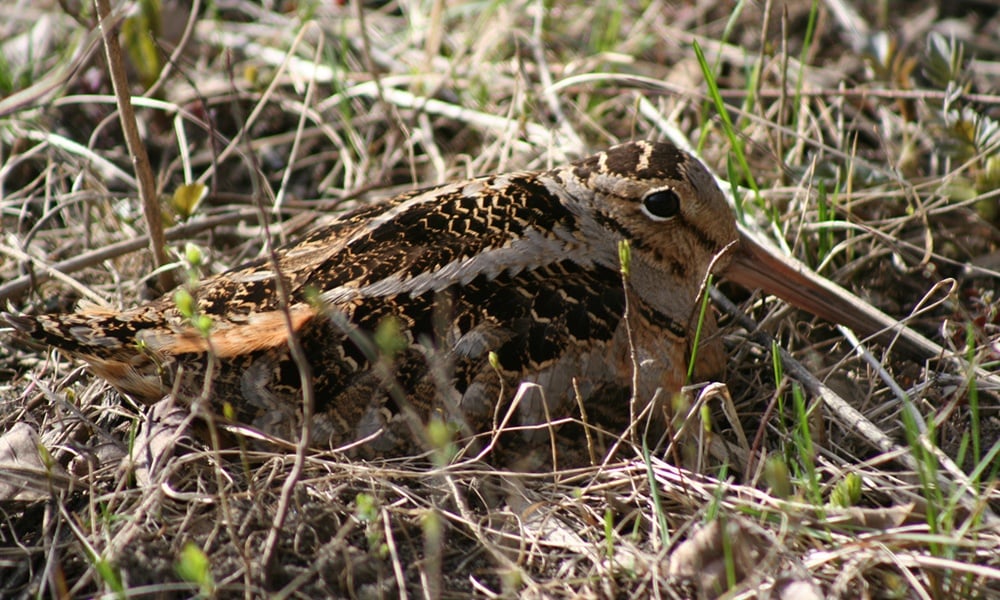 One of the earliest signs of spring is the American Woodcock’s mating dance. Also known as timberdoodles, American Woodcocks return from southern states in mid-March to establish territories and begin breeding.

Woodcocks are tiny game birds that are normally very reclusive and prefer to avoid being seen. To help with this, they have some of the best forest camouflaging of any other wildlife. All of this changes for a brief period in the spring when the males take center stage to attract a female mate.

The male American Woodcock’s mating display is often referred to as a “sky dance” and takes place only at dawn or dusk. A male will begin to call with a nasally, buzzy “peent” sound. Then, suddenly, he takes off from the ground, climbing 100 – 300 feet in the air. They perform a twisting and twirling flight display while emitting sounds made by the feathers on their wings, before landing in the same spot they took off from.

In his most well-known book, A Sand County Almanac,” conservationist Aldo Leopold wrote of the American Woodcock’s sky dance: “Up and up he goes, the spirals steeper and smaller, the twittering louder and louder, until the performer is only a speck in the sky. Then, without warning, he tumbles like a crippled plane, giving voice in a soft liquid warble that a March bluebird might envy. At a few feet from the ground he levels off and returns to his peenting ground, usually to the exact spot where the performance began, and there resumes his peenting.”

We can thank the Migratory Bird Treaty Act for making it possible to view the American Woodcock’s marvelous spring mating display. The act has been the most powerful bird protection law ever signed.