Eagle Reunited with Mate After Poisoning

Eagle Reunited with Mate After Poisoning 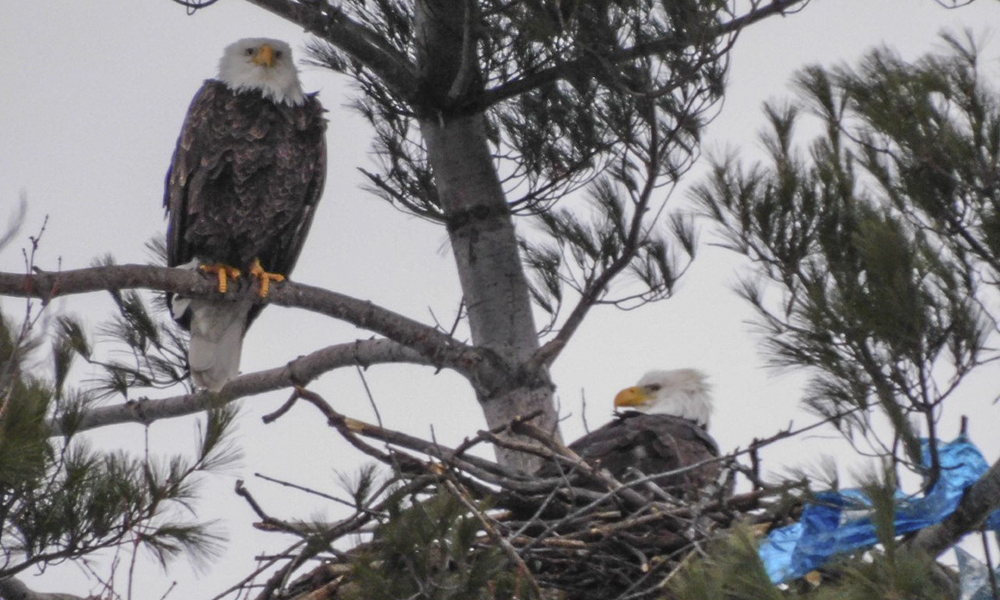 An injured bald eagle has been reunited with its mate this week thanks to a concerned resident, a group of volunteers and Willowbrook Wildlife Center in Glen Ellyn.

The eagle was released in the same Cook County forest preserve where it was found on Wednesday, and it was observed back in its nearby nest with its mate on Thursday by Sue Del Fiacco, who has been watching the nest for 12 years.

“I’m so excited to see my baby free again,” said Del Fiacco, who found the injured eagle in a puddle on the side of the road near a Cook County forest preserve during a snowstorm on New Year’s Day. “He looks great. It looks like he gained weight, too. He was so sick and bloody the day I found him. He looks really good now.” 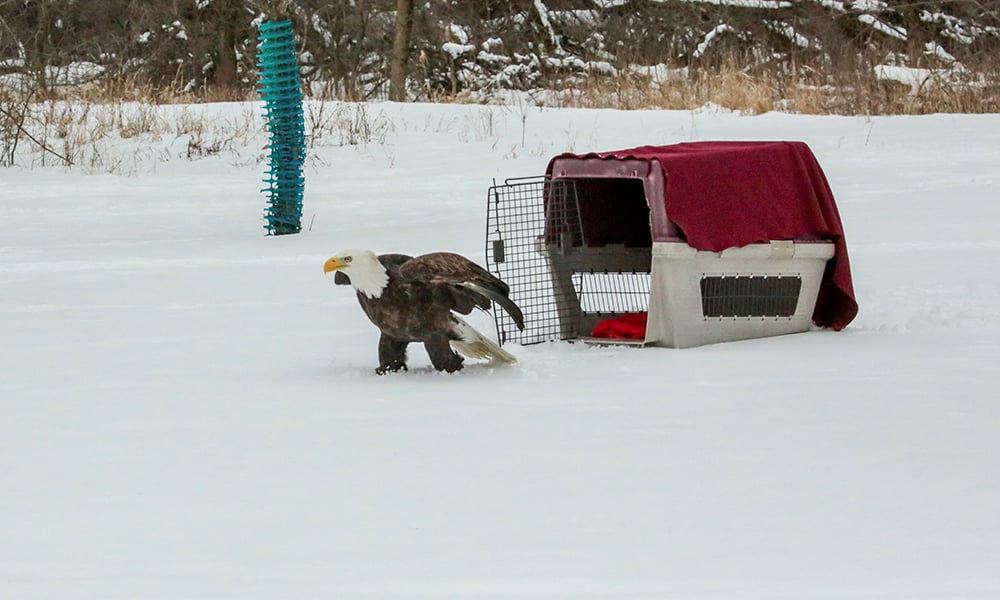 Dr. Sarah Reich, head veterinarian and manager of research and rehabilitation at Willowbrook, said she hopes the pair was reunited in time for nesting season.

“This case was especially rewarding because this eagle was able to quickly reunite with his or her mate, despite spending almost 40 days away in our care,” Reich said. “The fact that the bond remained unbroken despite weeks apart, and that this individual was returned hopefully just in time for breeding season, means that a successful nesting season may be in their future.”

Del Fiacco called Chicago Bird Collision Monitors (CBCM), a volunteer group that saves injured birds, to help rescue the bird, and within an hour CBCM volunteers Cathy Patrick, John Stoddard, and Lorna Lightle arrived to catch the bird and bring it to Willowbrook.

“Our crews got out their nets and tried to surround the eagle on three points, and then approached the eagle very quietly and cautiously,” Patrick said. “Whoever the eagle came closest to was the one who netted it, and it happened to be me. 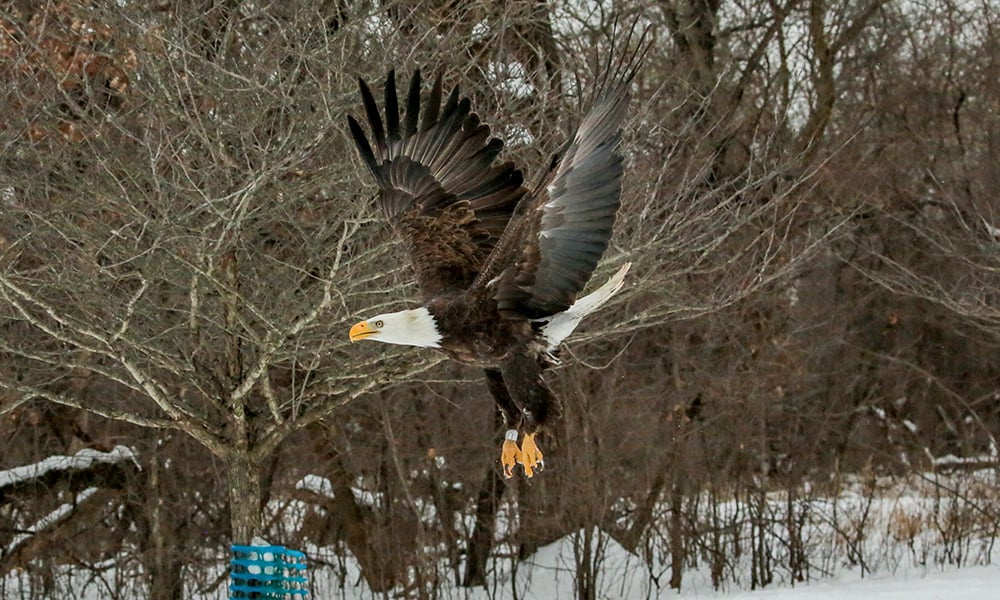 “Normally when I rescue raptors they usually stand up when I hold them, but this one was just laying,” Patrick said. “He was still struggling and very strong, but at the same time showing his weakness.”

Seeing the eagle fully recovered and released reminded them why they do what they do, Lightle said. 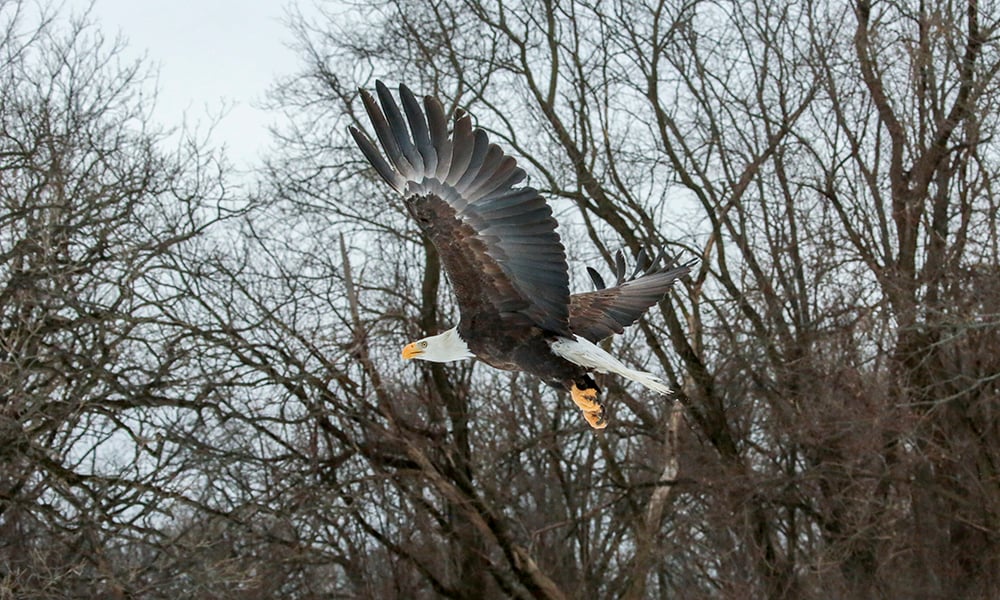 “That was our first rescue of the year,” Patrick said.

It was also Willowbrook’s first patient of 2022. The eagle came in very pale with a large amount of dried blood on its underside. Bloodwork showed its red blood cell level was half what it should be, and the bird’s blood did not clot.

Dr. Sarah Reich, head veterinarian and  manager of research and rehabilitation at Willowbrook, and Willowbrook wildlife keeper Mike Wittman, prepare to examine the injured eagle. While this eagle may look feisty, he was actually quite lethargic for an eagle.

Willowbrook staff concluded the eagle was suffering from anticoagulant rodenticide poisoning, most likely from eating a poisoned mouse or rat. Bald eagles are opportunistic hunters/scavengers, especially in winter, so its not uncommon for them to eat targeted species such as mice and rats. 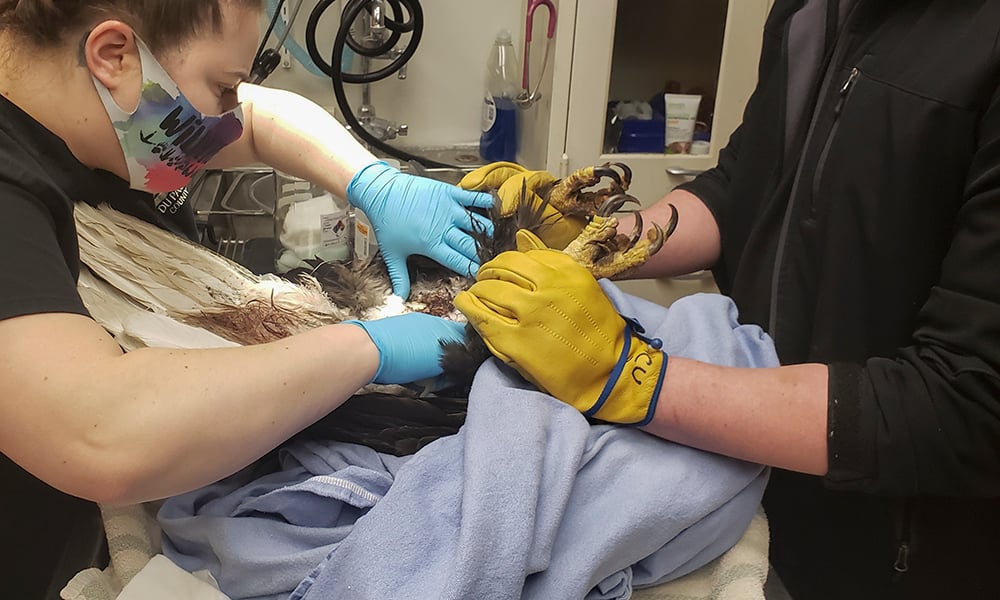 A large amount of dried blood was found on the bird’s underside from a very small wound.

Second-generation anticoagulant rodenticides such as brodifacoum and bromadiolone are very toxic at low doses, so rodents only need a single feeding. The poison inhibits an enzyme called vitamin K epoxide reductase, which recycles vitamin K in the body. Vitamin K helps blood clot, so if the body cannot recycle this vitamin, it eventually runs out. It takes about 3 days for the body to run out of vitamin K, so both target and non-target species don’t start showing signs of poisoning until days after ingestion.

Willowbrook staff treated the eagle by supplementing it with vitamin K. Treatment took more than a month because the poison stays in the body for 21 – 28 days. 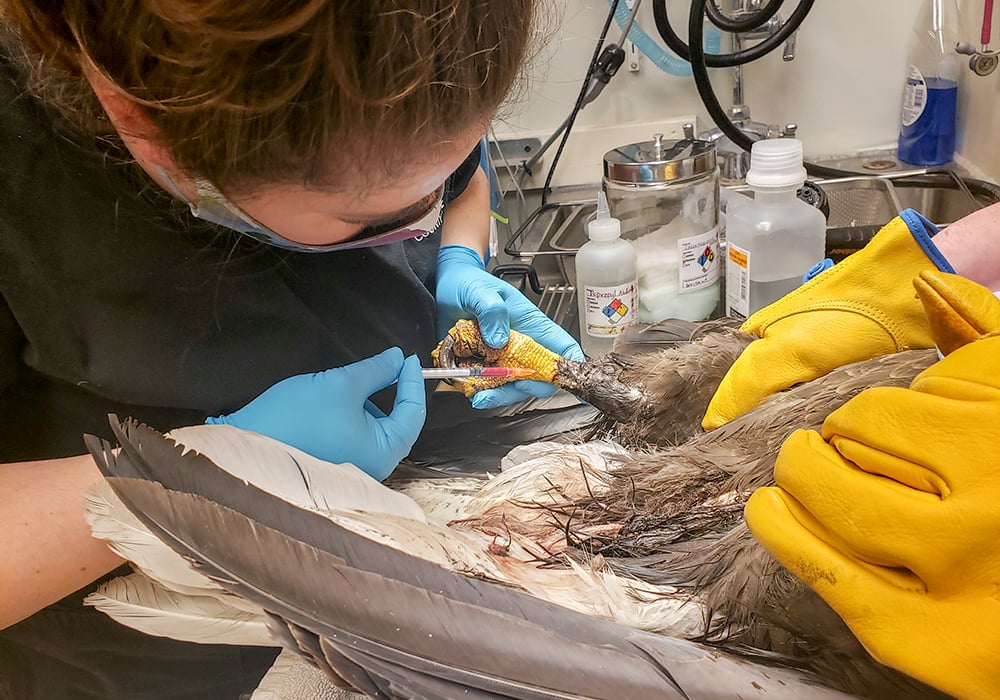 Bloodwork was then performed to look at red and white blood cell levels as well as organ system function and clotting time. The patient was significantly anemic and the blood did not clot for hours (should clot in minutes).

When dealing with unwanted rodents, the best defense is a good offense. Take steps to keep rodents away from your home by properly sealing openings and keeping human and pet foods in rodent-proof containers. If necessary, live traps, electric traps, or snap traps (indoors only) are preferred over poisons or glue traps because they don’t harm unintended targets. Reich recommends people stay away from rodenticides or glue traps.

Keeping our native raptor populations healthy and robust is the best, most natural form of rodent control.

“Release is the ultimate goal of wildlife rehabilitation,” Reich said. “Unfortunately, that goal is not achievable in some animals, especially in cases of rodenticide toxicosis, so it makes the success stories that much more precious.” 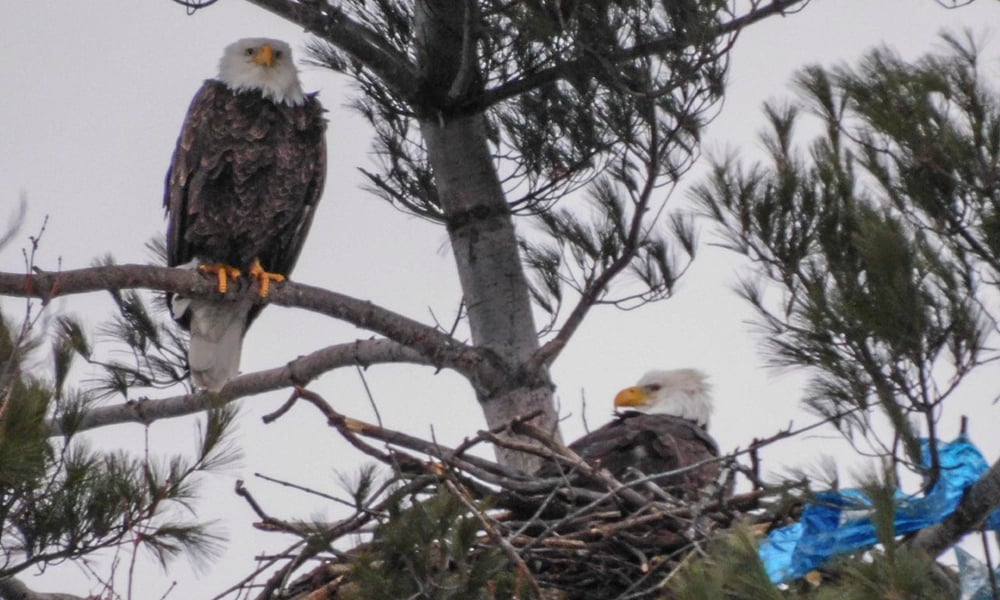 The eagle pair reunited and are back together again on their nest, hopefully in time for nesting season. Photo by Sue Del Fiacco