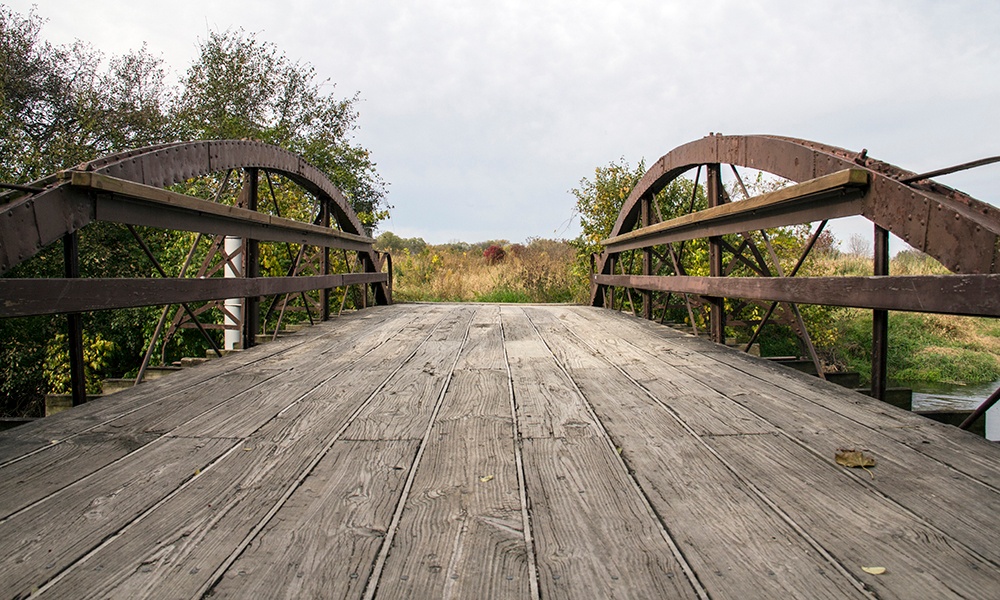 On a breezy May afternoon, I stood on an old bridge that spans the East Branch DuPage River at Hidden Lake Forest Preserve in Downers Grove, talking to people as they crossed the bridge.

I met families with strollers, people walking their dogs, joggers, a birdwatcher from Utah admiring the swallows, and two men fishing. Hidden Lake is popular with walkers, and a few said they have probably crossed the bridge 100 times.

Most of the people I talked with guessed the bridge was about 40 years old. One engineer recognized that it had to be older than that because of the cast-iron parts. Everyone was surprised to learn the bridge is 150 years old and most likely still in its original location. 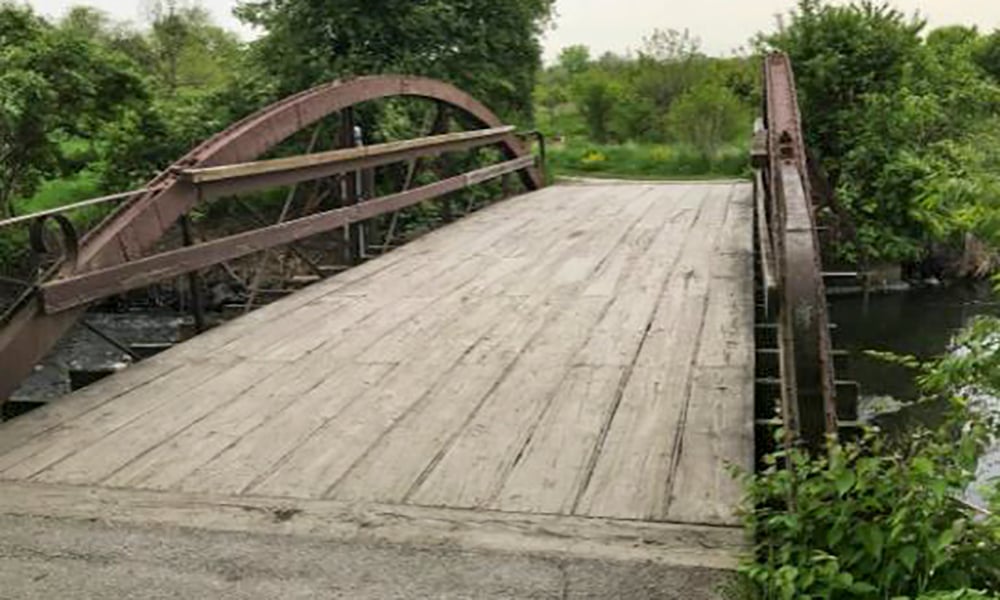 From glaciers to mounds, mammoths and farms, each month we highlight the often-overlooked history of our preserves and provide context to deepen your connection to the land, as well as tell the stories revealed to us through the objects and formations left behind.

The Need for Improved Transportation

Roads, canals, and railroads were all growing in the 1870s. DuPage County was growing, and people wanted better ways to get around. Although few details still exist, the bridge was likely purchased in the 1870s to cross over the East Branch DuPage River.

The wrought-iron bowstring pony truss bridge was manufactured in Cleveland, Ohio by Zenas King in his newly formed King Iron Bridge Manufacturing Company. It was a new type of bridge that was engineered to use less material than stone bridges and last longer than wood bridges. Its relative light weight and standardized design made it easy to transport all across the country. 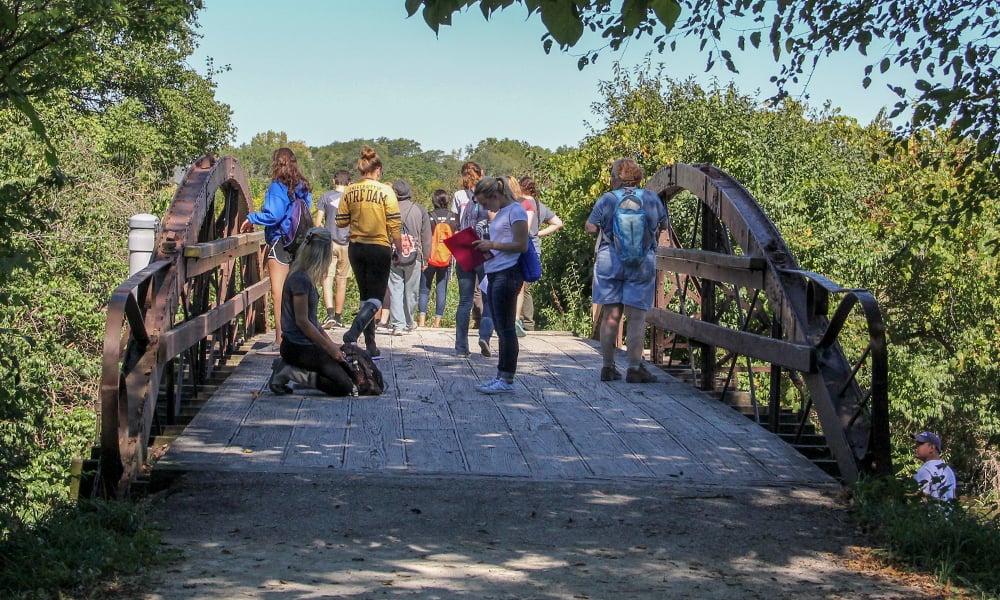 Mining in the Great Lakes was growing fast in the 1850s and 60s, providing Cleveland with lots of iron to work with. Zenas King started making iron roofing, bridges, boilers, and prison bars, but by 1871 he narrowed his focus to bridges because he knew there was money to be made by growing transportation needs. At one point his company was the largest bridge company in the United States.

The parts of the Hidden Lake bridge were most likely transported by railroad from the King Iron Bridge and Manufacturing Company in Cleveland, Ohio to Prospect Park, IL (now Glen Ellyn). From there they were moved south, pulled by horses on a dirt road. The bridge was assembled and likely installed in the same spot it sits today.

The road the bridge was built on may have had many names. It has been referred to as Barney Mill Road, Stauch Road, Bryant Road and Bryant Avenue. The road was originally used to haul timber to the Barney Sawmill from about 1837 to 1854. 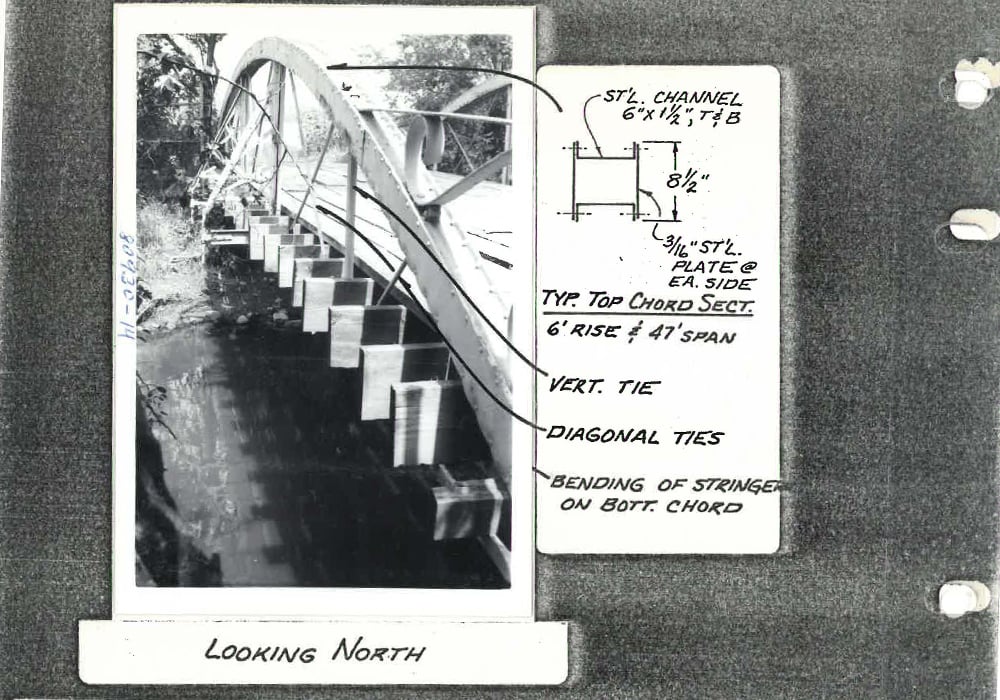 Locals could buy a timber lot just south of the river in what is now the Morton Arboretum and bring it to the Barney Mill to be cut into boards for building. Wood was also a source of fuel for cooking and heating homes. The road was extended many times north until, in the 1870s, it connected with Bryant Avenue.

In 1924, Route 53 was planned to connect DuPage County south to north. With the growing number of cars and trucks in DuPage County and people traveling further, arterial roads were needed.

The small roads connecting towns were replaced with highways. Looking at old atlas maps, it looks like much of Bryant Road north of Butterfield Road (IL 56) was used for the new Rt. 53, leaving only the small portion now known as Bryant Avenue in Glen Ellyn. However, Rt. 53 turned west before crossing the river. The Morton Arboretum already owned the property south of the bridge, so maybe Rt. 53 turned to go around the arboretum. Whatever the reason, this turn in Rt. 53 saved the Hidden Lake historic bridge.

The little bridge was not big enough to accommodate the Rt. 53 traffic and would have been replaced long ago, but instead it became part of a driveway to a private farmhouse. And there it stood for another 50 years surrounded by farm fields, clearly visible to passersby on Rt. 53.

Gary Sprandel said he thought the bridge was painted pink in the 1960s and 70s on bridgehunter.com. Looking at it now, you can see what looks like bright orange paint under many layers of brown. In 1983, the road leading to the bridge was officially vacated and the Forest Preserve District included the bridge as part of the path system around Hidden Lake Forest Preserve.

How the Bridge was Built

The 50-foot-long and 13-foot-wide bridge was built at a time when we were trying new techniques. Many designs were patented, and the unique style of this bridge made it easy to identify.

The weight or load is carried by the arch made of four parts, including a top and bottom channel with a plate riveted to each side. It forms a long arching box or square tube. The bottom chord attaches to the ends of the arch preventing it from spreading. Vertical and diagonal ties evenly distribute the load and keep the whole thing stable. The deck that we walk on is attached to stringers supported by the bottom chords.

This design only exerts vertical pressure on the abutments on each shore, making a strong stable footing. The original railing is formed by spiraled wrought-iron bars. They add decoration and prevent people and livestock from falling off the bridge on each end where the arch is low. A middle support that was added in the 1980s will not be necessary when the bridge is restored. 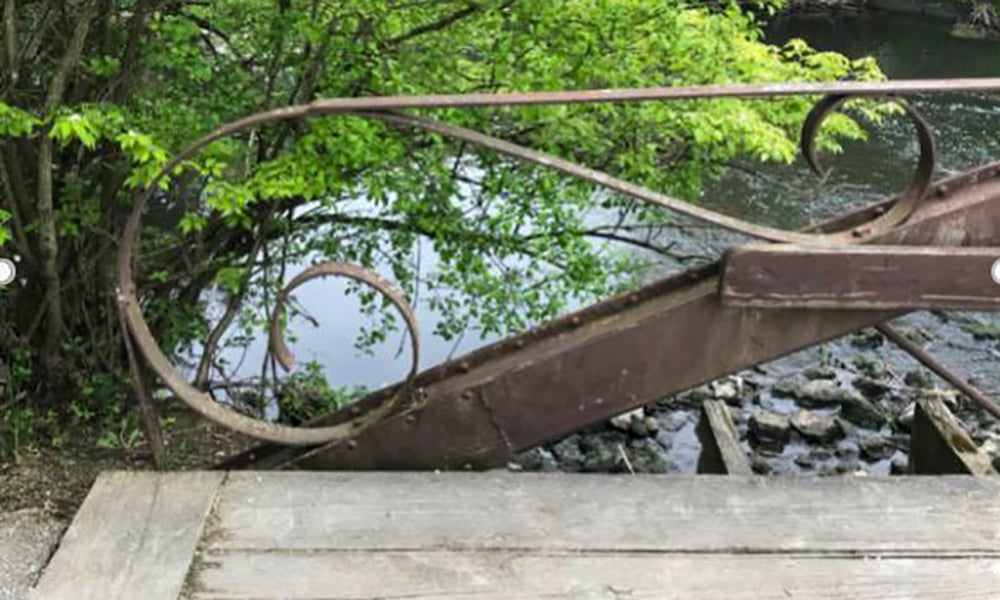 Decorative wrought iron at either end of the historic bridge keeps animals and people from falling off the bridge.

The Future of the Old Bridge

Built in the 1870s, it is one of a few remaining bridges of its type. Repaired in the 1980s the bridge has served the people of DuPage County for generations. It once again is in need of repair. 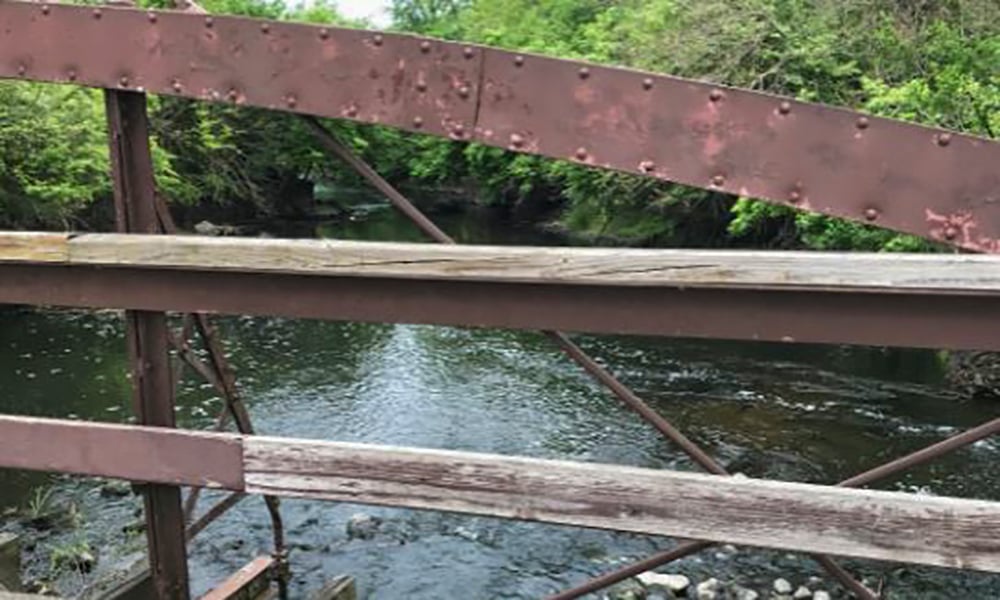 The view from the historic bridge looking southwest.

Because of its unique construction and historical significance, the Forest Preserve District has decided to restore the bridge rather than replace it. Restoring the bridge is more cost effective and will last much longer than a replacement, according to Brock Lovelace, manager of engineering and environmental services for the Forest Preserve District.

Soon the bridge will be moved off-site where a company will disassemble it, replace the failed parts, and put it back together on new concrete abutments. The process will take about three months, and once repaired it should last another 100 years. When I asked if it would be painted pink or orange, Brock said the forest preserve plans to paint it the reddish brown found on other forest preserve bridges. 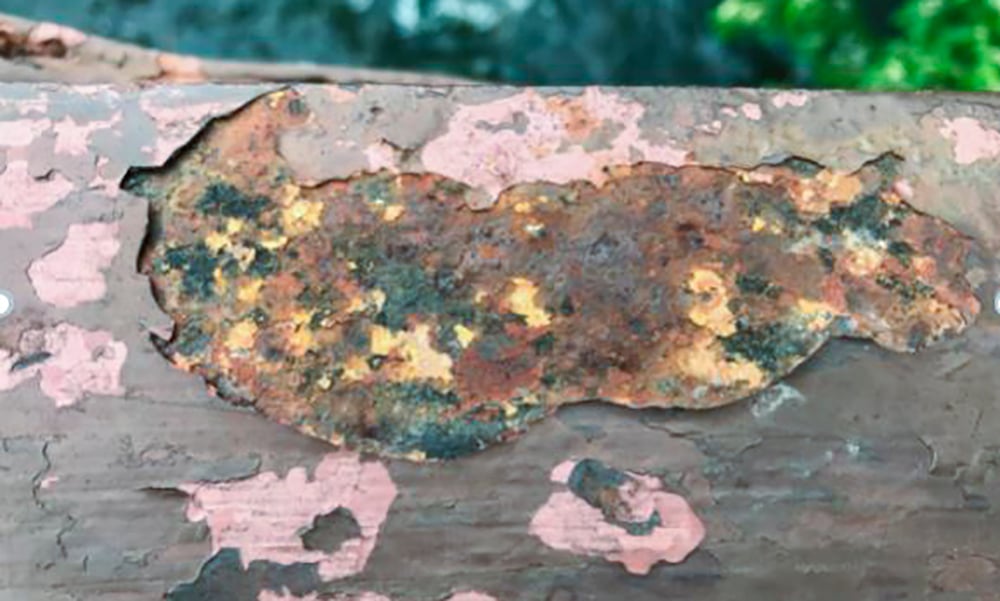 Rust and the underlying pink color is evident on the 150-year-old bridge.

When I told bridge users that the bridge was far older than 40 years, in fact is was 150 years old, I got reactions like “Wow!” “Holy Cow!” and “That’s Amazing.” Many visitors said they had crossed the bridge 100 times but had never given it much thought. The two men fishing under the bridge said they thought it looked “cool,” but had no idea it had been here for that long.

History is all around us even if we do not notice it. Sometimes it is hidden in plain sight. 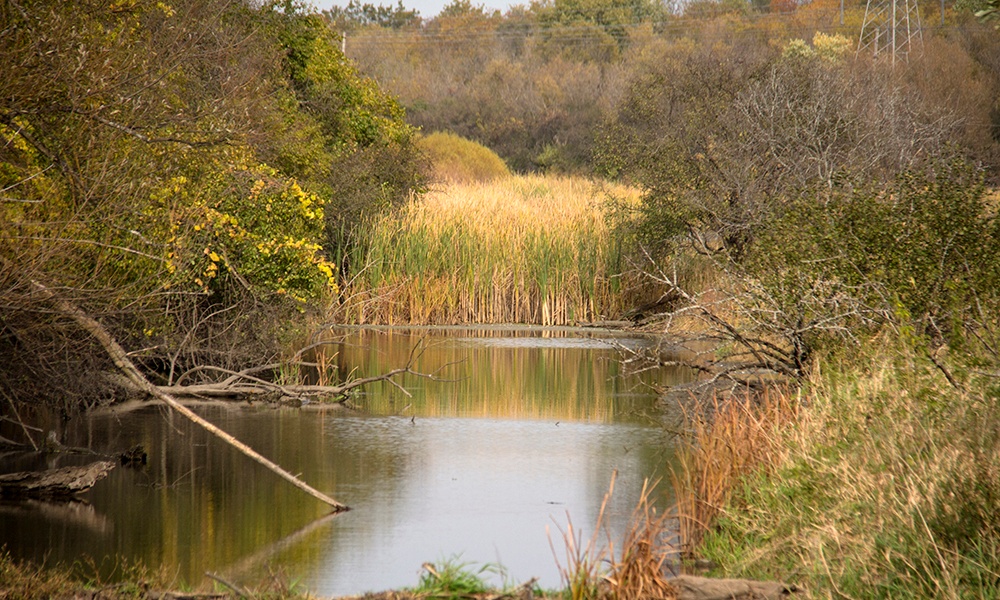 A view of the West Branch DuPage River looking northeast from the historic bridge.