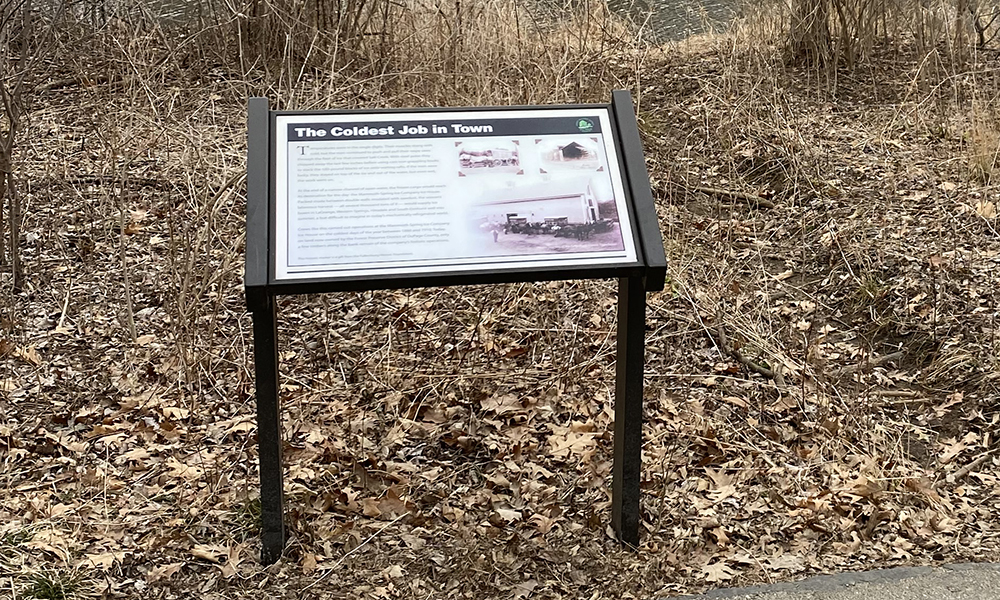 If you look closely while walking along the Night Heron Trail at Fullersburg Woods Forest Preserve in Oak Brook, you can find a little piece of history.

This secret remnant can be found just north of Washington Street between the entrance to Fullersburg Woods and Graue Mill. Buried along the banks of the creek are a few old-looking timbers that tell a story about a natural spring and how it served area residents for a time.

In 1836, John Talmadge and his family settled near the current location of the Double Tree Hotel off Spring Road in Oak Brook. Late one night in 1861 the family was awakened by an explosion of water on their farm. A natural spring had sprung and was aptly dubbed “Mammoth Spring” for the abundant amount of water that poured from it.

Talmadge and neighboring farms used the natural spring water in their homes and for irrigation on their farmland for 28 years. 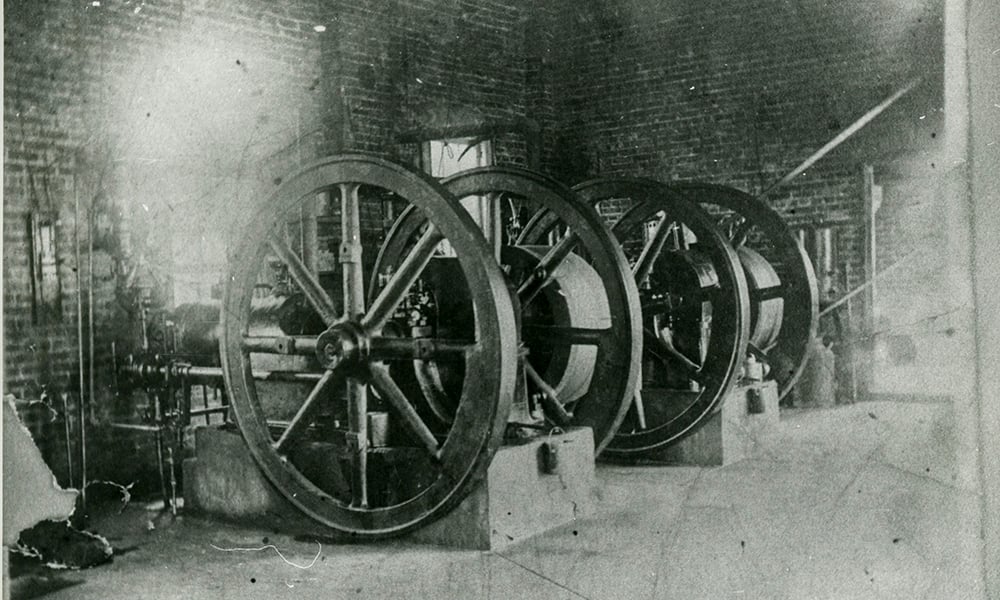 Part of the pully system used to help move the ice blocks into the Mammoth Spring Icehouse. Blocks of ice were floated on rafts through channels to a “water box,” a conveying system that was powered by a two-horse team. The horses would pull a long rope attached to a series of pullies to lift the ice up to a chute that would then slide the ice into the building. Photo courtesy of the Oak Brook Historical Society

When the ice on Salt Creek reached a thickness of about sixteen inches, crews would cut blocks of ice and float them on rafts through channels to a “water box,” a conveying system that was powered by a two-horse team. The horses would pull a long rope attached to a series of pullies to lift the ice up to a chute that would then slide the ice into the building.

Inside the house the ice blocks were stacked about eighteen blocks high, and each layer was covered with sawdust or wood shavings. It took 50-60 men in the winter to store the several thousand tons of ice needed to supply the surrounding communities with ice during the summer. 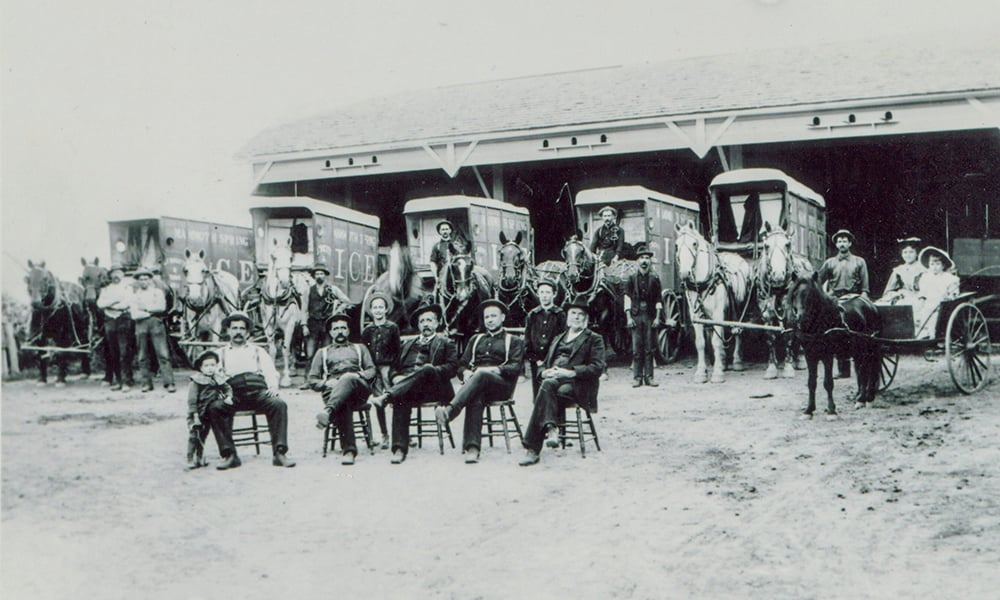 Outside the Mammoth Spring Icehouse, teams of horses and wagons set for ice delivery. Five wagons made daily trips to supply ice to markets and homes in LaGrange, Western Springs, Hinsdale and South Elmhurst. Photo courtesy of the Oak Brook Historical Society

In 1885, Ruchty constructed an additional icehouse and increased his wagon fleet to accommodate an increase in demand for ice. Several thousand tons of ice was stored each winter for delivery the following summer at 50 cents for 100 pounds.

Five wagons made daily trips to supply ice to markets and homes in LaGrange, Western Springs, Hinsdale and South Elmhurst. In 1885, the increasing demands for ice resulted in construction of an additional icehouse and two more wagons to serve the area.

The business thrived until the introduction of cooling systems that could make ice forced the Ruchty family to sell their company to the West Suburban Ice Company in 1910. 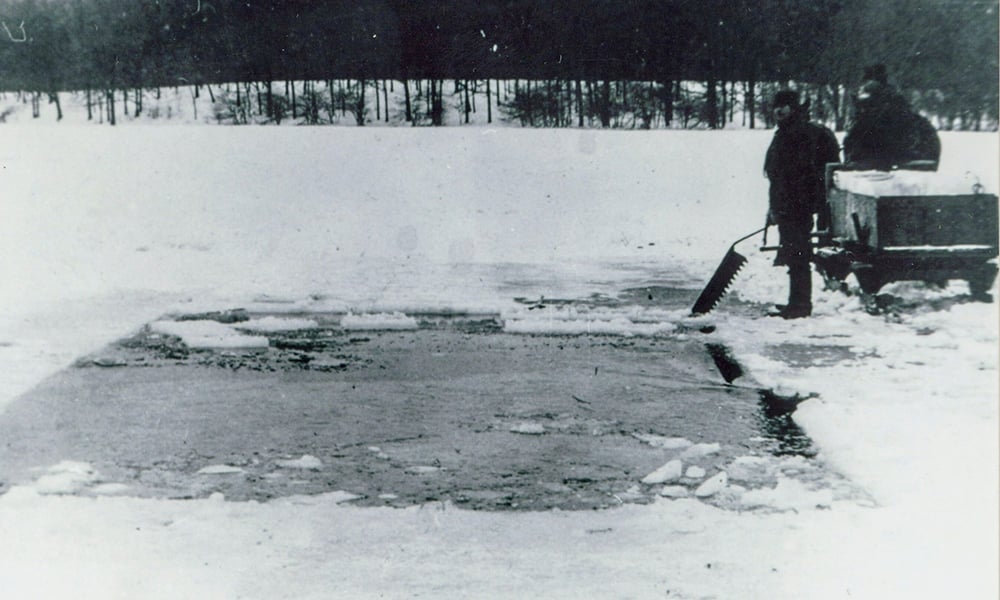 Ice cutting on Salt Creek. When ice on Salt Creek reached a thickness of about 16 inches, crews would cut  Photo courtesy of the Oak Brook Historical Society

In 1916, the city of Elmhurst took over supplying water to its residents. It abandoned Mammoth Spring and instead drilled wells to supply residents with water. The original trough of the spring, located on the current Double Tree Hotel site, was destroyed when Spring Road was widened in 1979.

Over time, almost all existence of the Mammoth Spring Icehouse disappeared, except for a few old timbers sticking out of the banks of Salt Creek. A sign donated by the Fullersburg Historic Foundation marks the location of the icehouse. Be sure to look for it on your next adventure along Night Heron Trail at Fullersburg Woods. 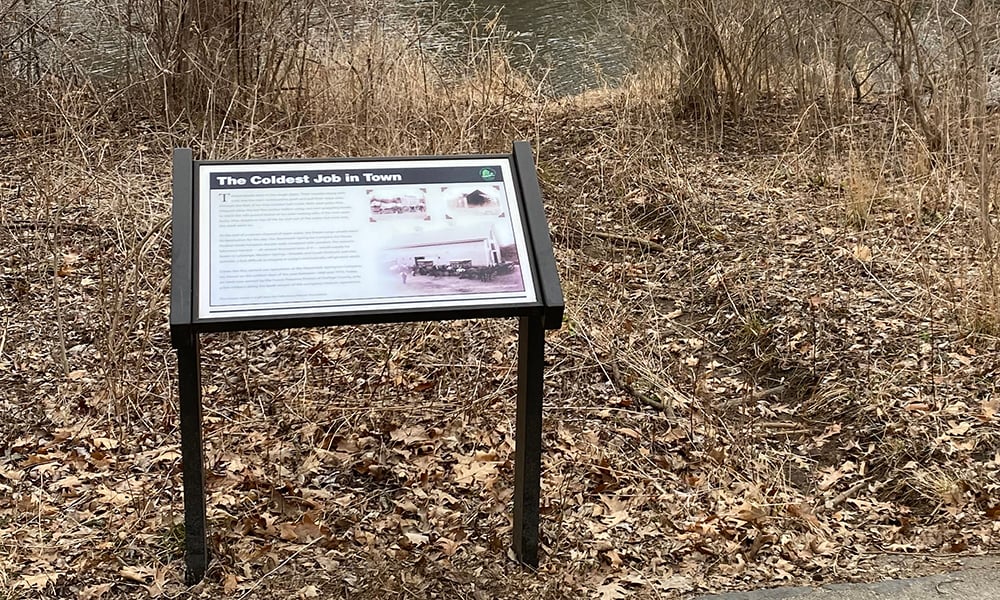 A sign along the Night Heron Trail at Fullersburg Woods marks the spot where the Mammoth Spring Icehouse operated along Salt Creek.