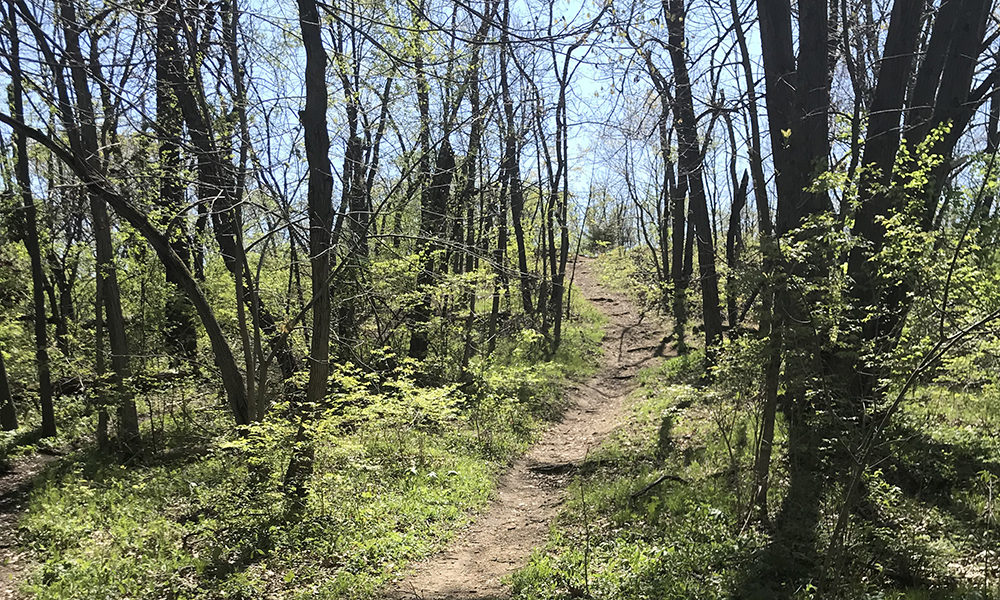 But there’s a small section of Churchill Woods that’s tucked in a far corner, apart from the rest of the preserve and not as well known. This little piece of land, known as Glacial Ridge, has experienced some massive changes throughout its history.

Glacial Ridge lies south of the main section of Churchill Woods Forest Preserve. It is located west of Hill Avenue and Longfellow Avenue., just north and east of Walnut Glen Park. It lies between the Union Pacific West Railroad and the Illinois Prairie Path. When walking on the Prairie Path, Glacial Ridge rises to 40 feet above the path on both sides.

The top of the kame at Glacial Ridge at Churchill Woods Forest Preserve in Glen Ellyn.

Between 10,500 and 30,000 years ago, the last of four major glaciers passed over DuPage County. Known as the Wisconsin Glacier, this massive ice flow and its movement formed the hills and valleys we still see today in northeastern Illinois.

Nearly one mile thick, the Wisconsin Glacier slowly advanced from large snow events, pushing the earth like a bulldozer, scraping and churning up rocks ahead of it. The large boulders left behind are called glacial erratics. 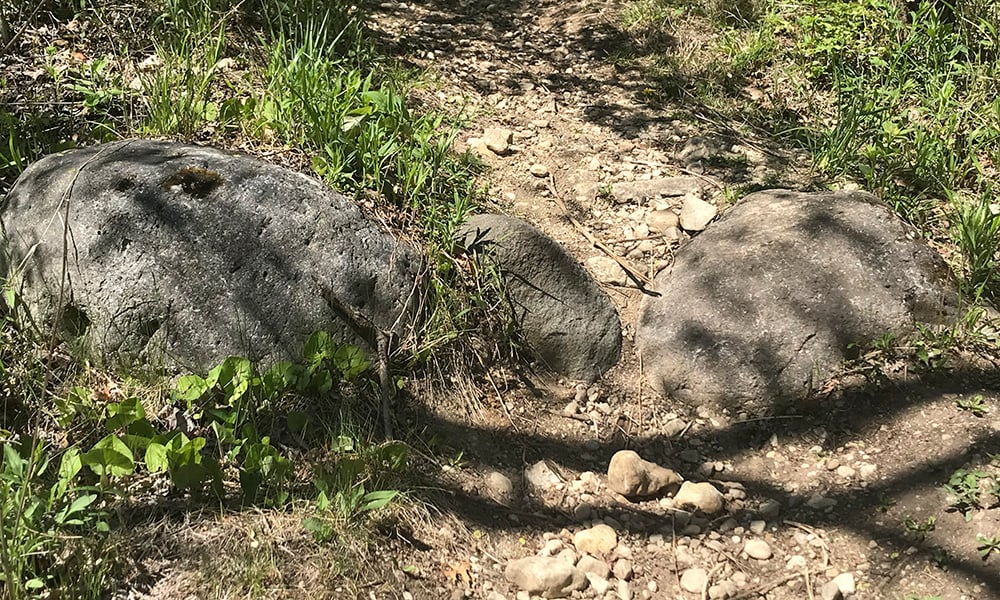 Some of the glacial erratics left behind from the Wisconsin Glacier at Glacial Ridge at Churchill Woods Forest Preserve.

An illustration showing where the various moraines ended. Illustration by Wayne Lampa

Glacial Ridge is a glacial kame that formed west of the Valparaiso Moraine. Kames are glacial hills that consist of material like rocks, gravel, and sand. They’re formed when a stream of meltwater deposits material into cracks or holes in the ice of the melting glacier.

An illustration showing how a kame is formed. Illustration courtesy of geoching.com

As the glacier melts away, the material accumulates, creating a hill-like structure in the middle of the flat zone (outwash plain) left by the glacier. The Glacial Ridge kame stretches about a third of a mile, where it gently slopes back to the flat surface of the outwash plain.

A Railroad Runs Through It

In September 1900, the Aurora, Elgin, & Chicago Railway began building a new electric railway to connect Aurora and Elgin to Chicago’s Loop. The goal was to run high-speed electric trains on their own line to avoid delays with freight traffic. Building the two railroad tracks involved excavating into the Glacial Ridge kame soils. 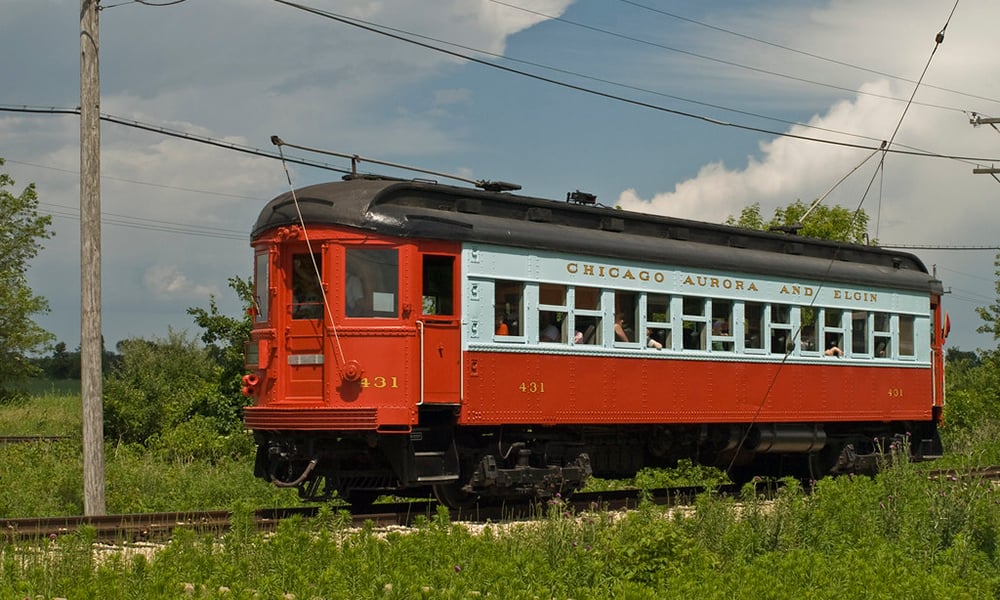 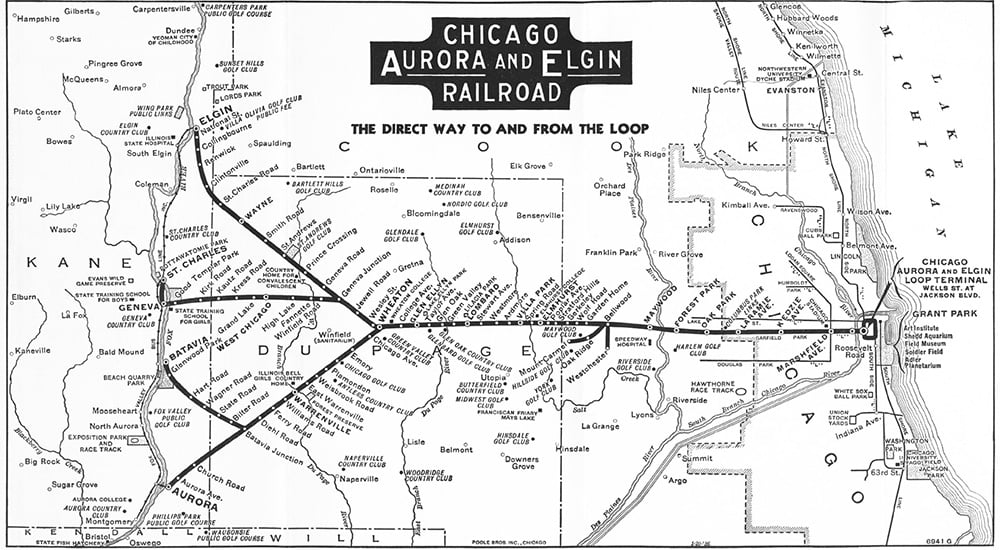 Glacial Ridge as a Forest Preserve

Thanks to the foresight of local DuPage County conservation groups, the eight-acre Glacial Ridge property was acquired by the DuPage Forest Preserve District on Dec. 16, 2004. Even though the area was dug out and excavated for a railroad and used as a gravel pit, the site is still host to more than 100 native plant species, including some state-endangered plants. Due to the unique glacial kame soil and steep slopes, the site is sensitive to disturbance and erosion. 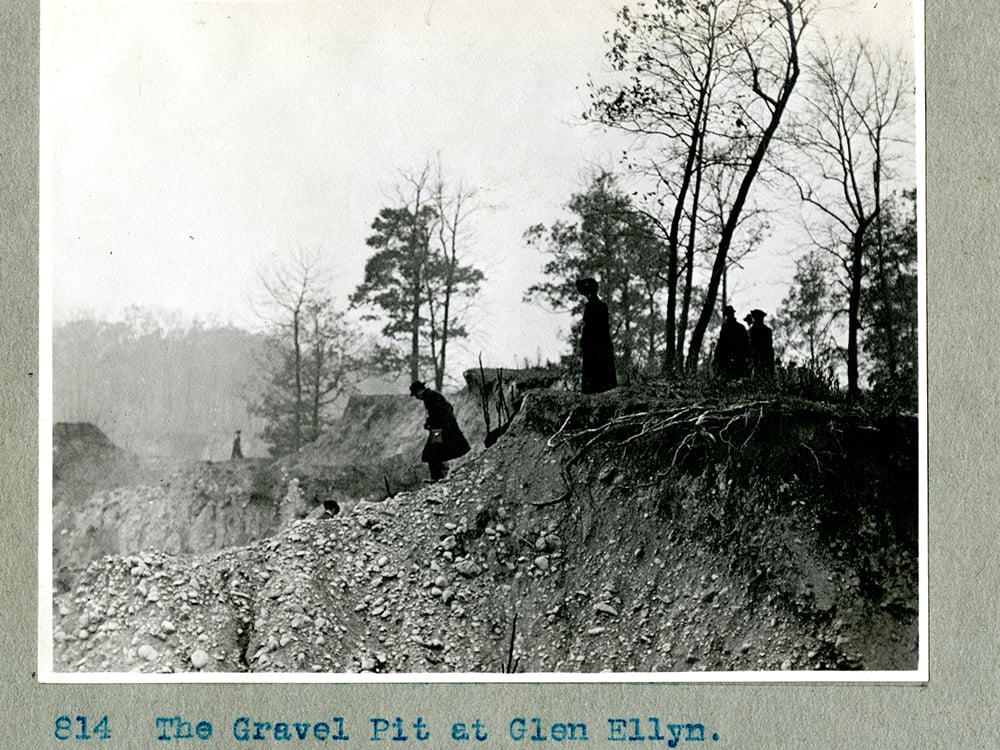 A 1914 photo of the gravel pit at Glacial Ridge at Churchill Woods Forest Preserve in Glen Ellyn.

To visit Glacial Ridge, you need to walk or bike to it, as there are no nearby parking lots. On your way to the preserve, look for large boulders along the Prairie Path. These glacial erratics were left by the melting Wisconsin Glacier. Also, look for old concrete bases from the signal towers that provided power and direction for the trains rolling through.

Look closely while exploring Glacial Ridge and you might find cable from the Chicago, Aurora & Elgin Railroad, which used to operate in the area.

The trails in Glacial Ridge are footpaths, so park your bike and lock it up before you enter. Feel free to carefully navigate the paths up and down the slopes of the preserve on foot. As you walk, keep an eye out for the historical remnants of the Aurora, Elgin & Chicago Railway. Old creosote-soaked electric pole stumps can be found with native vegetation growing out of them. There’s even an abandoned cable that held the lines that powered the trolleys as they ran past this amazing glacial landform. Enjoy the view as you make your way up through the oak woodland to the top of the kame. 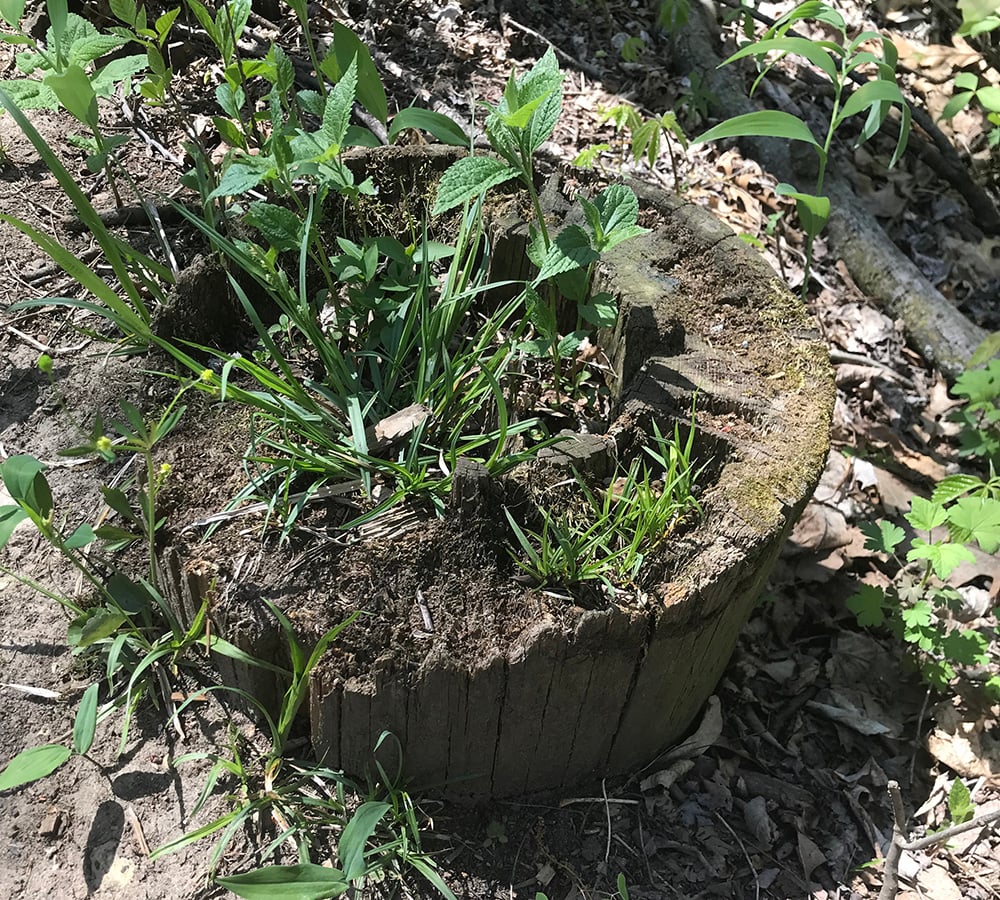 Other evidence of the Chicago, Aurora & Elgin Railroad that you might run across at Glacial Ridge include electrical poles like this.

Bruce Blake, the volunteer steward at Glacial Ridge, shared his favorite thing about Glacial Ridge: “I love the feeling of how remote and quiet it can be when the landscape turns green. Sitting down on a log and looking over the rolling landscape and not realizing you are a stone’s throw from civilization. So this is how it looked 200 years ago.” 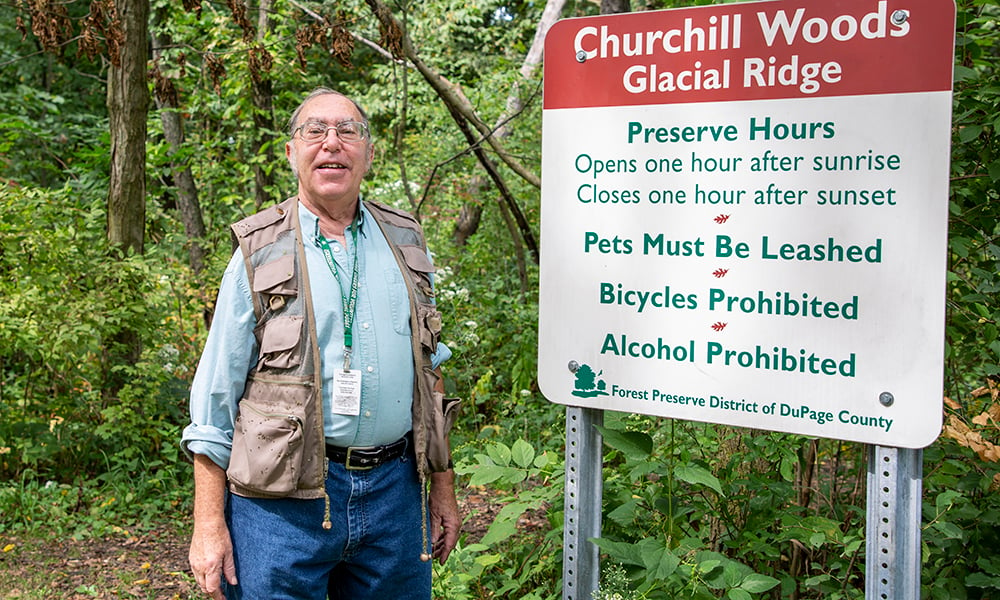