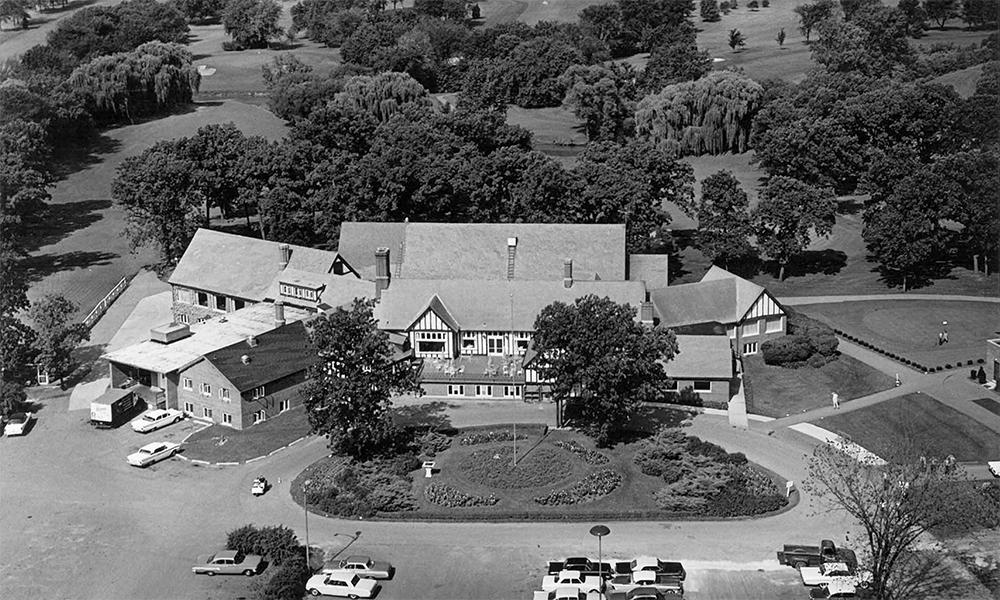 When an 11-year-old Randy Cochran snuck into Salt Creek at night to pilfer lost golf balls at the private Elmhurst Country Club in Addison more than 50 years ago, he never imagined what it would lead to.

The adventure ended up serving as the gateway to a lifelong love of golf, an education, and a career.

Prompted by his mother, he confessed this transgressions to a neighborhood priest and offered him his favorite golf ball, a British-made “Sweet Shot,” as atonement. Despite his confession, Cochran slipped back onto the country club grounds again to play a few holes of golf and ended up losing the “Sweet Shot” back to the Salt Creek on the 16th hole, the first island green in Illinois.
After his brothers fibbed about his age to meet requirements, Cochran was hired as a caddy at the course. From this humble start, Cochran’s golf journey included an Evans Scholarship for college and led to him playing professionally, earning accolades like Illinois PGA player of the year in 1991 and becoming a golf professional at country clubs, including a return to the Elmhurst Country Club. These life-shaping personal memories sprouted from those days and nights weeding through the marshes and splashing through Salt Creek at the golf course.

Long before Cochran hunted for golf balls as a neighborhood kid at the Elmhurst Country Club, the land had an altogether different meaning for locals.
Before and during American settlement in modern-day DuPage County, the Potawatomi used the Salt Creek area for hunting and trapping and named the region “Tioga,” which means the ‘”gateway.” In 1812, the Winnebago encamped at “Tioga” at the present-day golf course and used the gateway as the launching point for an assault on the residents of Ft. Dearborn (Chicago).
At personal risk to his own status and life, Chief Black Partridge of the Potawatomi arrived in advance of the Winnebago and saved the family of trader John Kinzie, but the chief was unable to prevent the bloodshed that led to further conflict and left its scar on the land’s memory.

A New Chapter for the Land

As Chicago developed, the land known as Tioga adopted a new purpose and became a gateway to golf recreation. Members of the Elmhurst Country Club (ECC) realized the need to expand and move from their original 9-hole golf course property in Elmhurst (now the location of York High School). 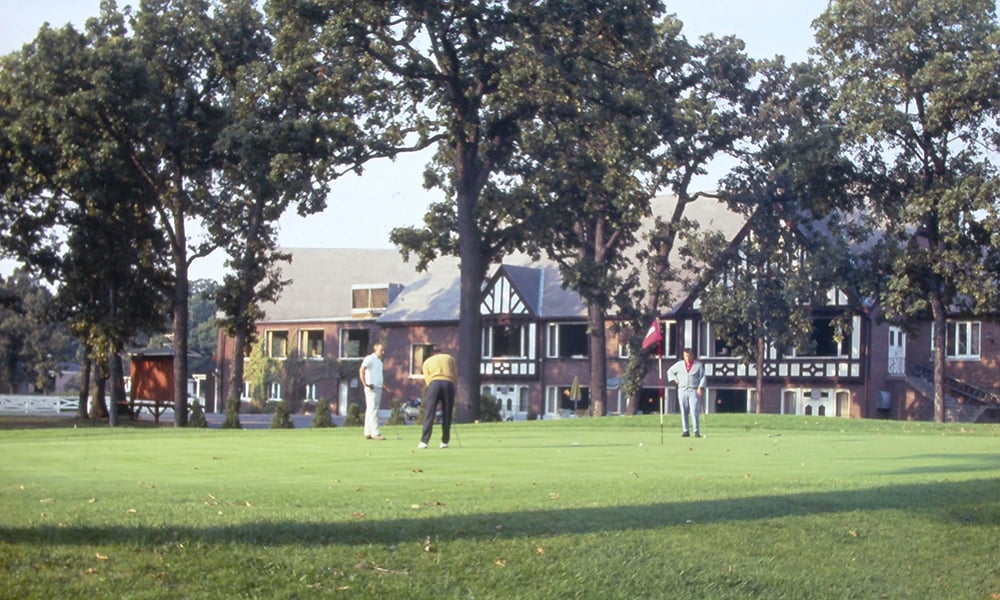 People golfing a the Elmhurst Country Club. (Photo courtesy of the DuPage County Historical Museum)
By 1927, ECC built a much larger course along Salt Creek and constructed a grand Tudor-style clubhouse. The course and clubhouse attracted national attention, drawing in celebrities like Bob Hope, and golf greats for the 1941 Chicago Open won by Ben Hogan. 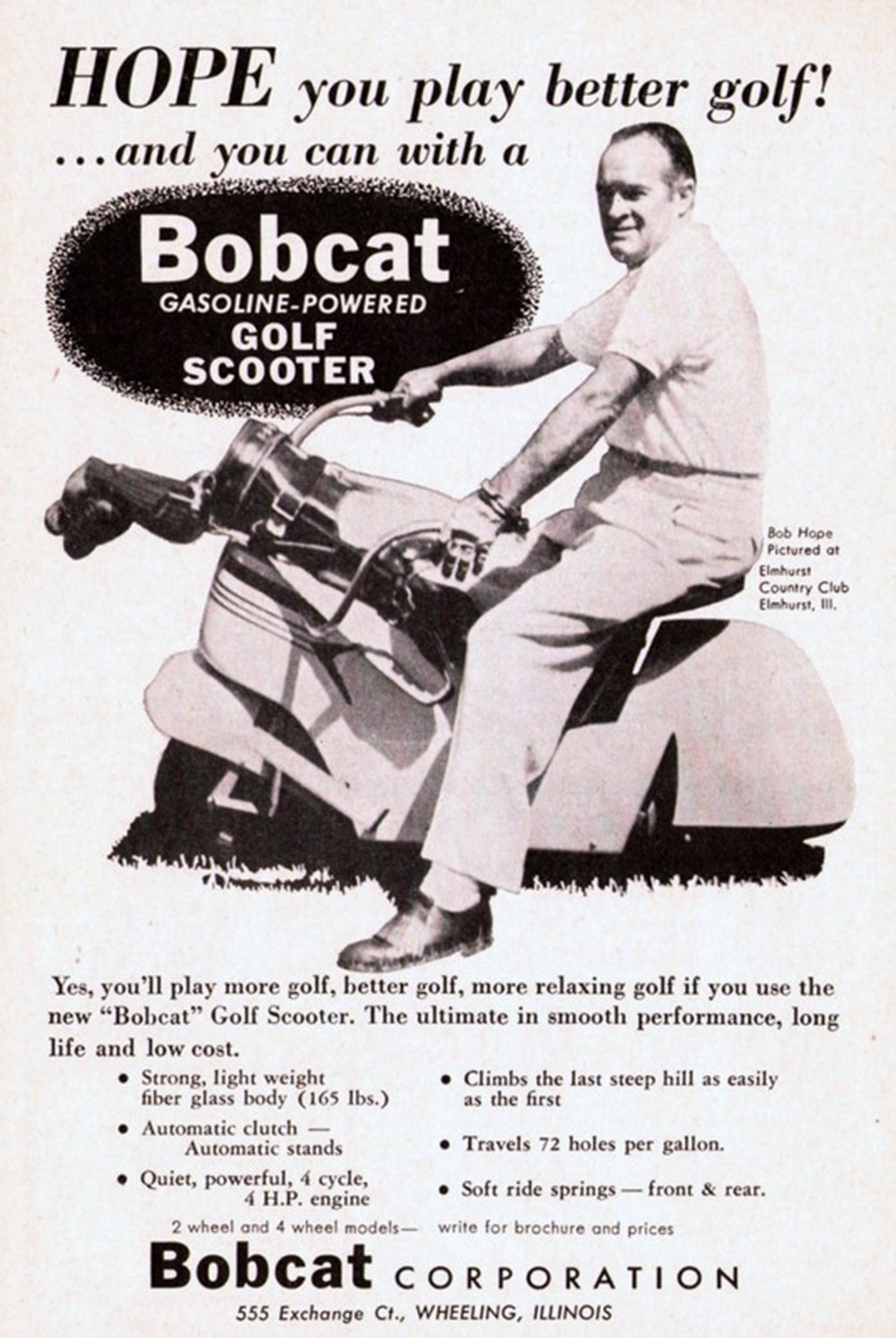 While some of the course’s memories include the famous, most of the memories were much more personal to the community. Countless weddings, proms, holiday and themed dinners created numerous lasting memories for area residents. While Randy Cochran’s experience as a caddy led to his own unique journey, his story was one of many memories formed at ECC. 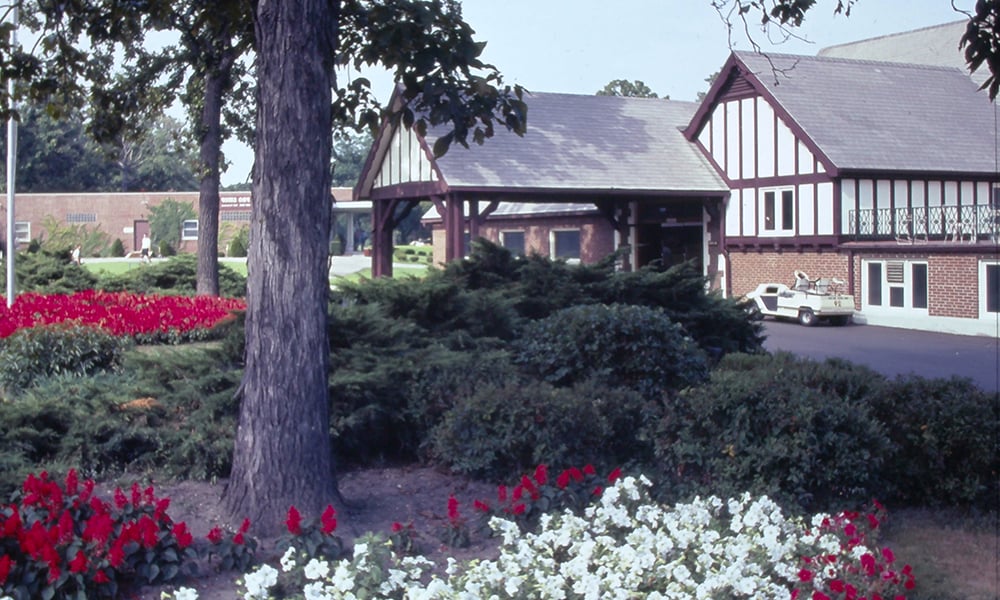 Over the years, ECC maintained an open space while suburban development continued to engulf the surrounding land. The DuPage Forest Preserve District recognized the importance of preserving this open space and purchased the ECC in 1986, preserving it for recreation and to soak up excess stormwater runoff from neighboring roads, parking lots, and other infrastructure. Formerly a private country club, the Forest Preserve District expanded the tradition of making memories by opening up the course to the general public as “Oak Meadows.” 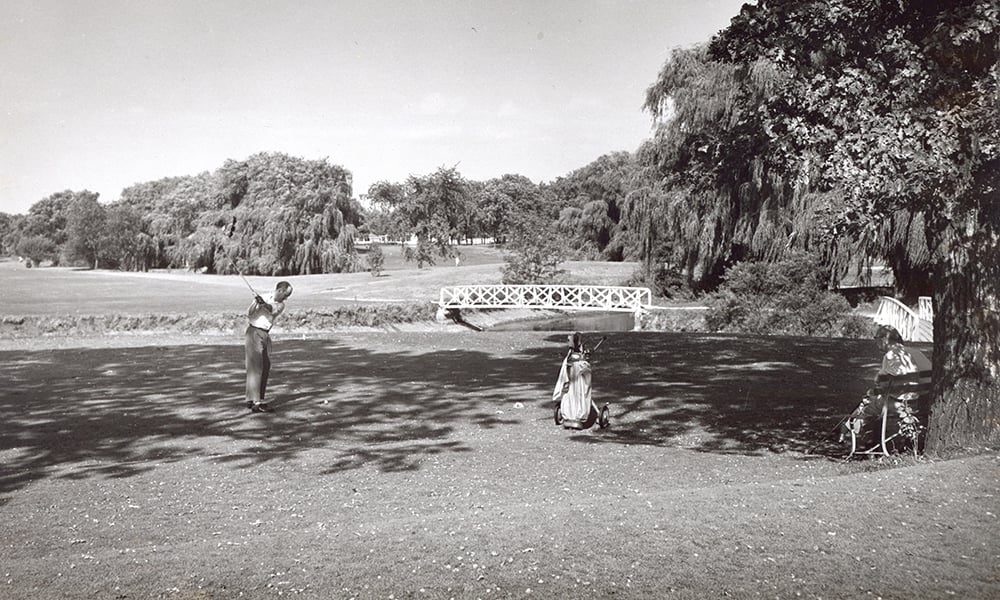 Mother Nature can sometimes be controlled, but can never be fully controlled. Storms led to flood events greater than Salt Creek could handle: water would cover the land, shutting down the course for weeks, and threatening neighboring properties.
But nature saved its most shocking moment for 2009 when lightning struck the clubhouse and destroyed the magnificent structure. Both fire and water left its mark on the land and left the Forest Preserve District at a crossroads. The same bolt of lightning that burned down the clubhouse also sparked a movement to reinvent the concept and purpose of the clubhouse, course, and land.
Realizing its role as a precious oasis of greenspace in a developed suburban setting, the Forest Preserve District responded to the increasing pressures of urbanization by restoring natural features and reinventing the former golf course into a “golf preserve.” 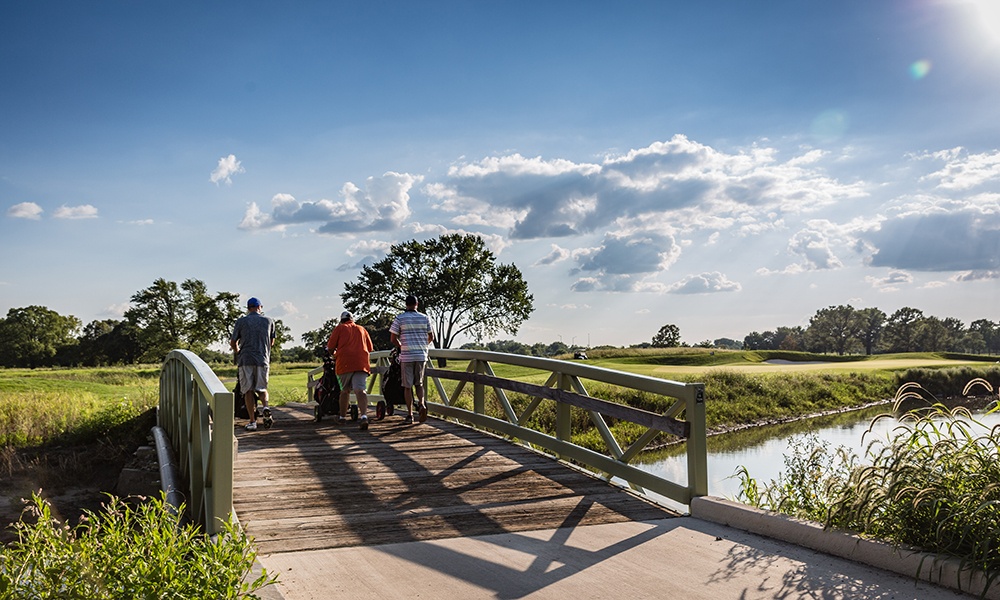 In 2015 work began on the ambitious Oak Meadows project. Plans called for a major two-year environmental restoration that improved water quality for Salt Creek, enhanced habitat for fish and other aquatic species and a created a new 18-hole public golf experience.
Along with a name change to The Preserve at Oak Meadows, the property was reconfigured to reduce flooding in nearby communities by holding an additional 20 million gallons of stormwater from Salt Creek during flood events, while also minimizing flood damage to the course. 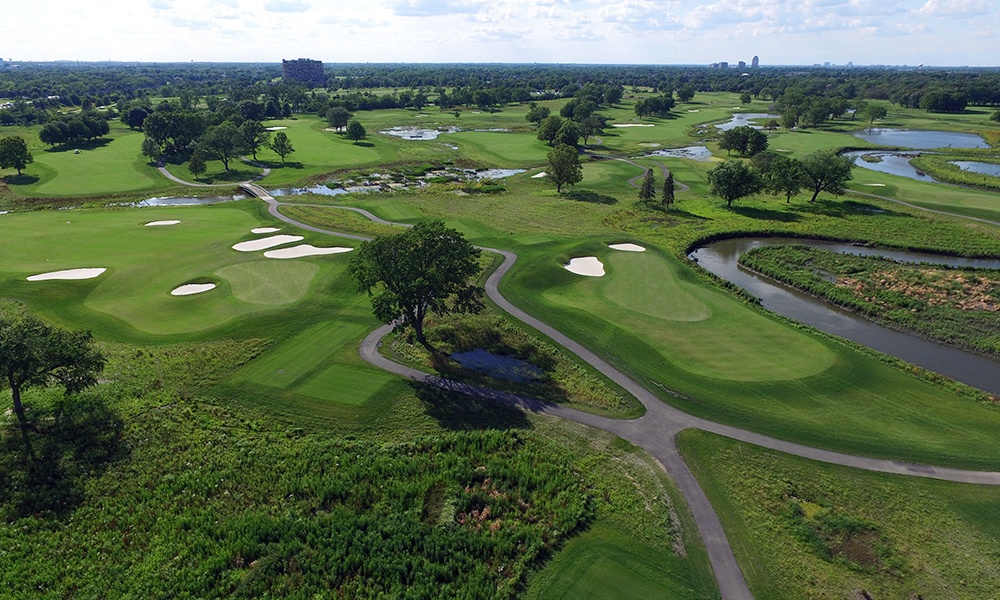 During the restoration, the waterways around the former 16th hole and island green were dried up, revealing a cache of lost golf balls. On a project site walk, one of these golf balls caught the eye of the course architect and was quickly identified as the “Sweet Shot,” which had been discovered and treasured by Randy Cochran as a boy and then lost during his furtive attempts to land shots on the island green. The memories of the past not only reside in hearts, but may also leave indelible imprints on the land.

The course reopened in 2017, but the property still lacked a clubhouse. The former clubhouse, with its grand size and Tudor style, was a monument that dominated the landscape. 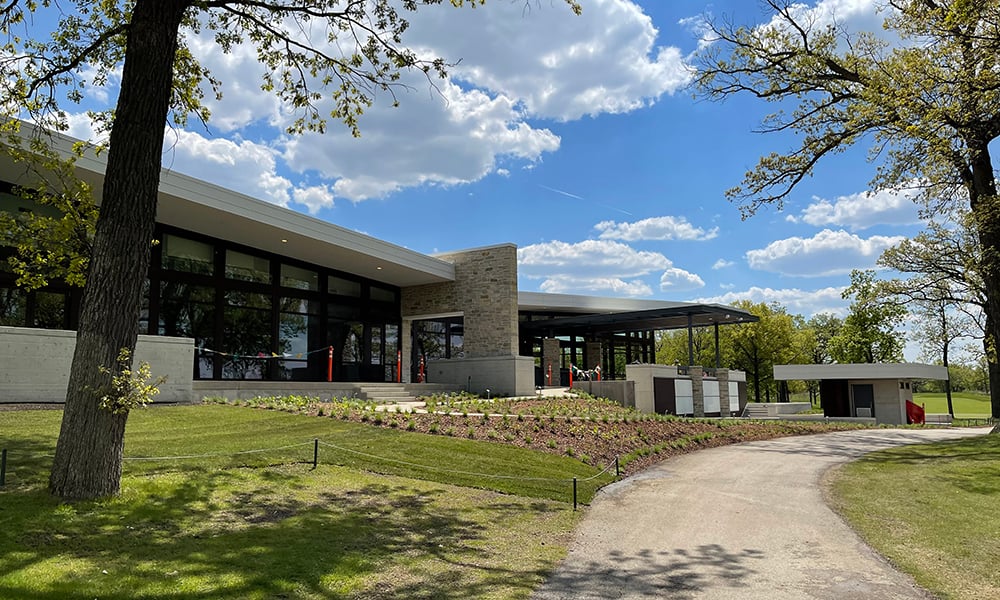 A new clubhouse was designed to blend into and complement the natural landscape with architectural angles forming ‘lines of influence’ to draw visitors’ attention back to nature's beauty.
Although built on the almost the same footprint as the former Oak Meadows clubhouse (a 50,000-square-foot structure), the new 18,000-square-foot clubhouse features a modern design that blends the indoors with the outdoors and clearly speaks more to the future of this property than the past. 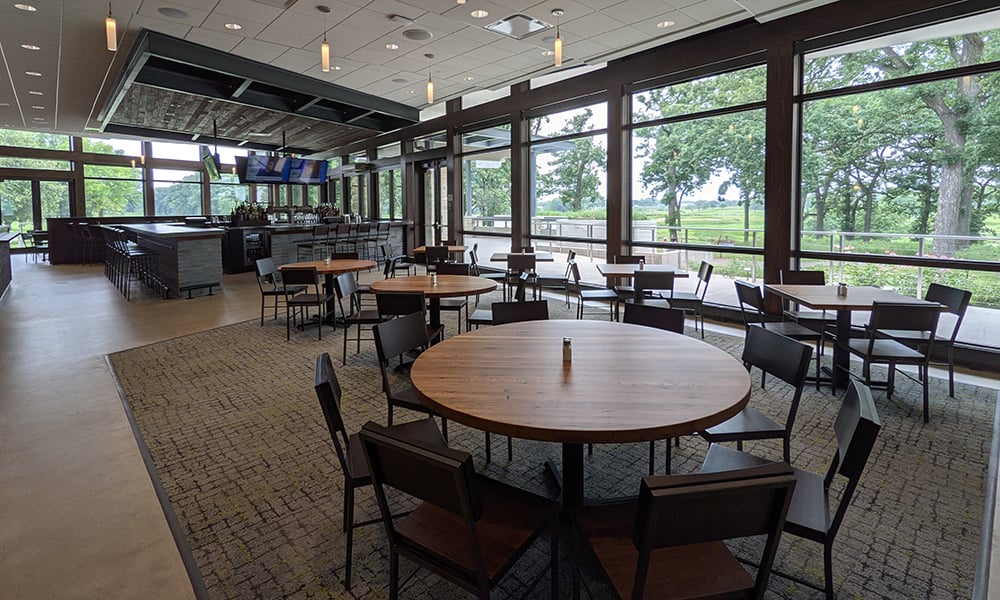 The reinvented golf course at The Preserve received awards and recognition from golf publications and environmental groups alike when it reopened in 2017, and the new clubhouse represents a continuation of ecological stewardship at the DuPage Forest Preserve District property.

Elements of the new clubhouse, called The Greenway Tap, include:

Open now to the public, the new clubhouse serves the same function as the old — a venue and hub for golf recreation activities — but also reflects its reinvention by focusing on educational programming, such as bird-watching and nature hikes, to serve as a gateway for new memories connecting individuals and communities with the natural world. 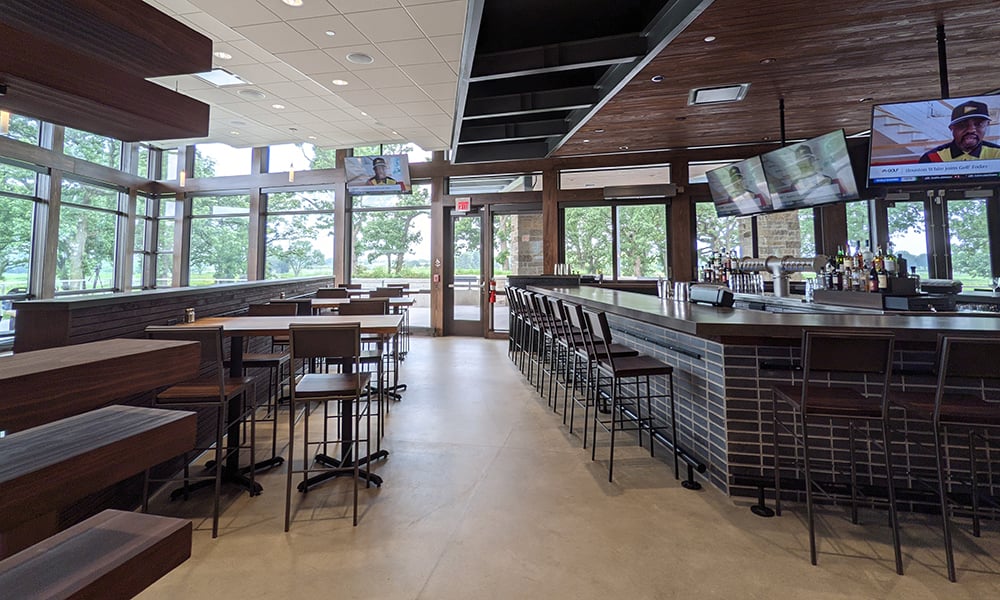 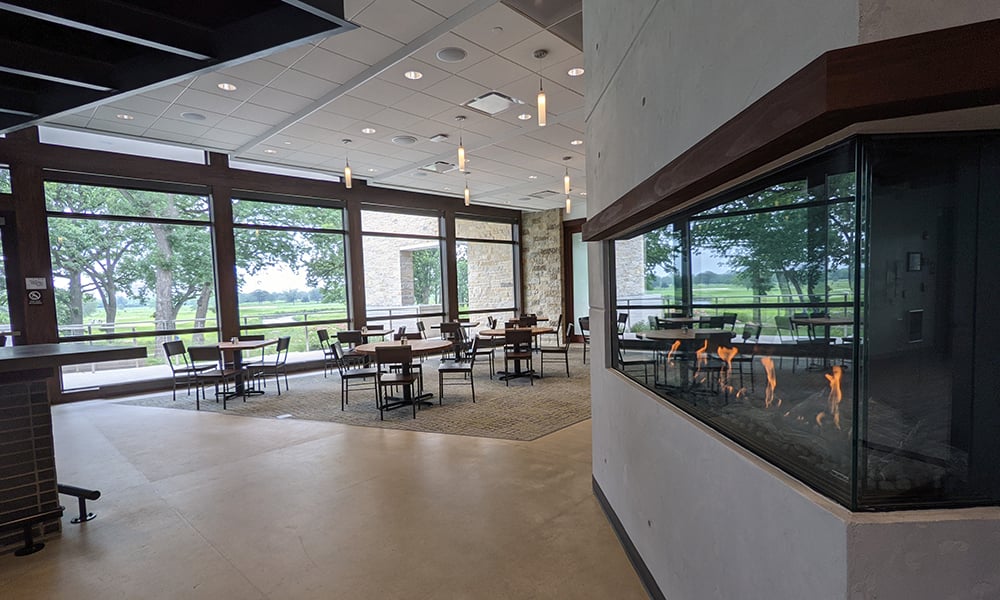