Reunited and It Feels So Good

Reunited and It Feels So Good 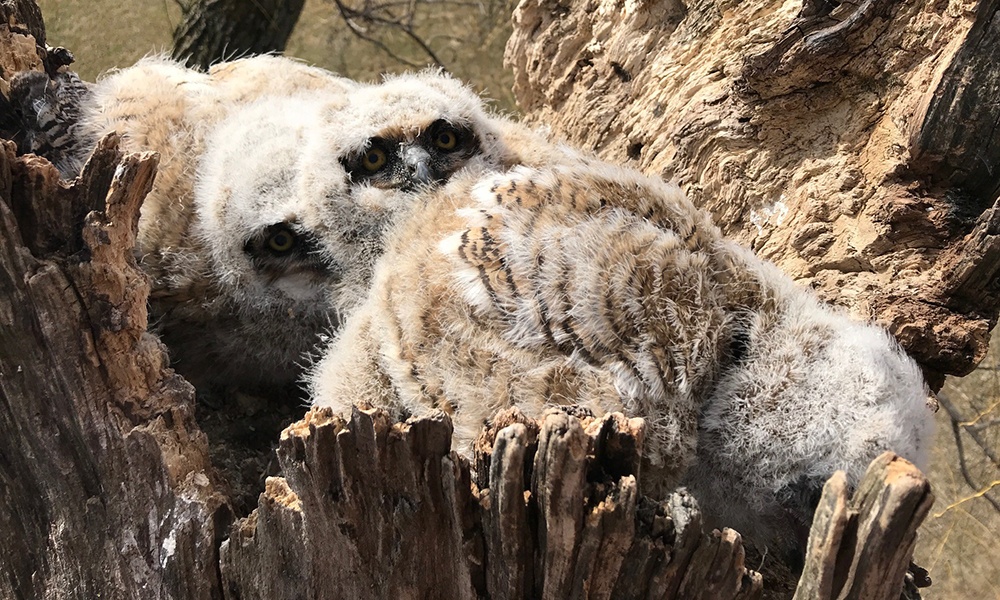 March winds can be fierce and the days blustery! It's no wonder, then, our wild, woolied and feathered often take tumbles from treetop nests this time of year.

Recently District Ranger Adam Carlson retrieved a great horned owlet from the ground at a DuPage forest preserve. “After arriving I realized that the nest above contained two more owlets inside the crotch of the tree,” says Carlson. "I worked to get this owlet to our Willowbrook Wildlife Center and then planned to check on the others shortly." 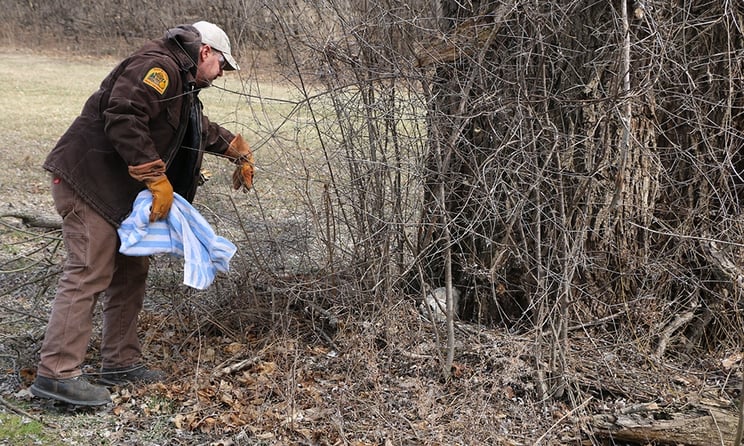 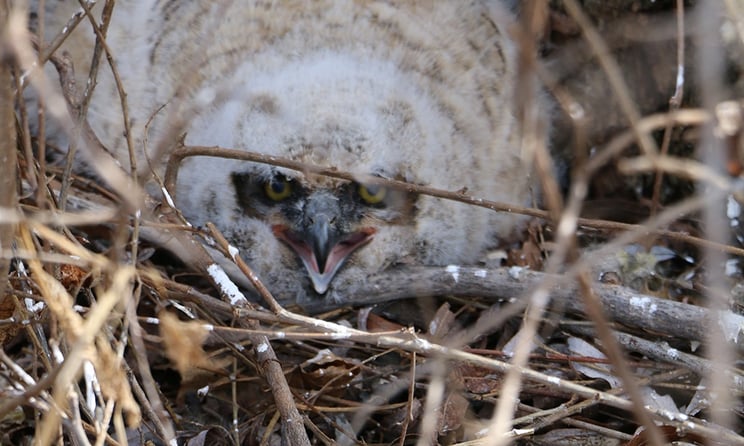 Carlson scooped up the bird, placed it in an animal carrier and took it to Willowbrook — the District’s native wildlife rehabilitation center — for examination and treatment. 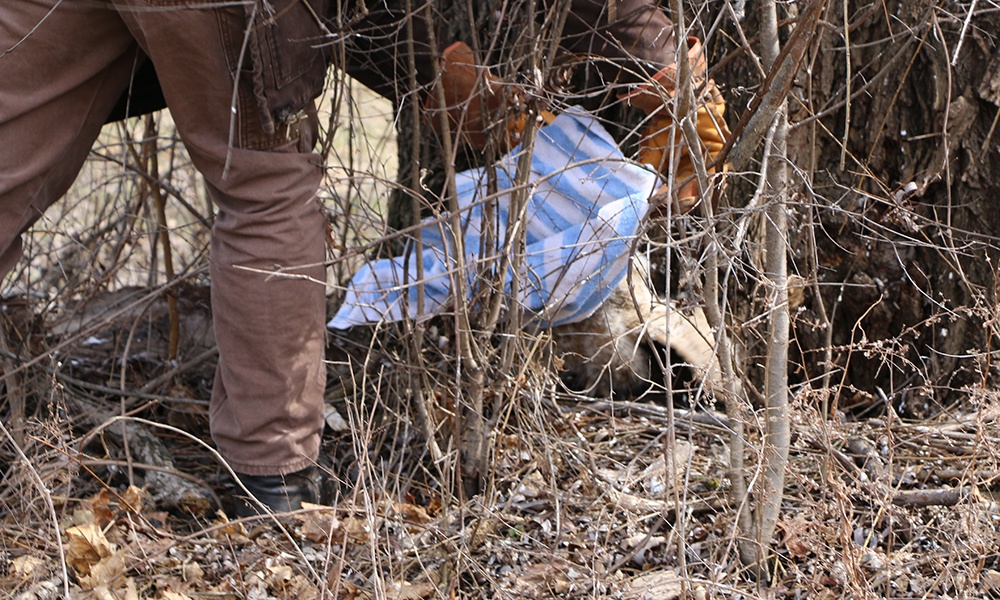 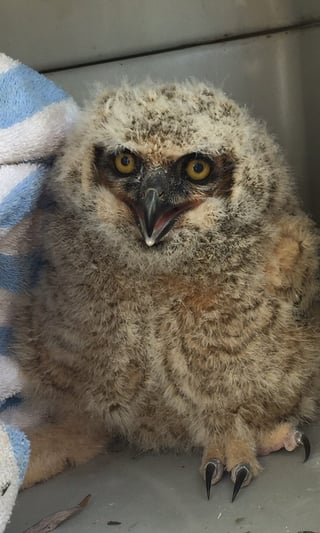 Willowbrook examined the bird, administered fluids and deemed it healthy to be returned to the nest. 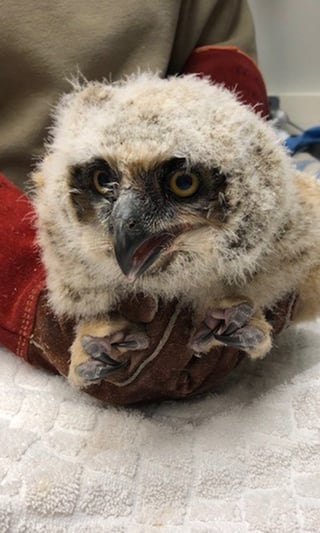 Carlson was then joined by Ranger Jacob Nordman at the site to return the owlet to its nest. The rangers erected a long extension ladder and placed the owlet into a small sack, then Carlson climbed the ladder (with owlet in tow) to the high treetop. 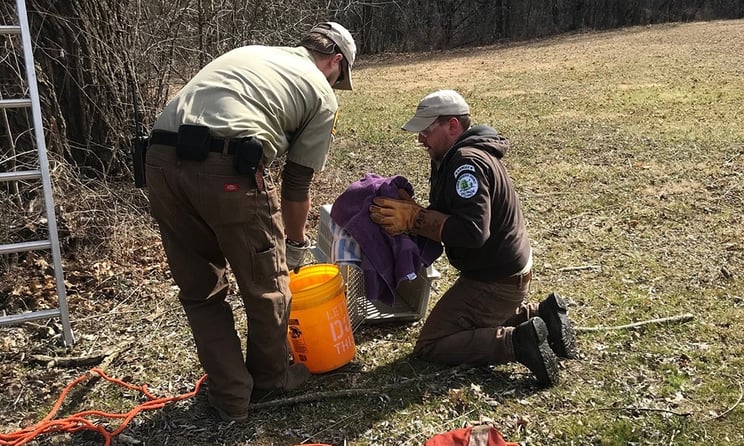 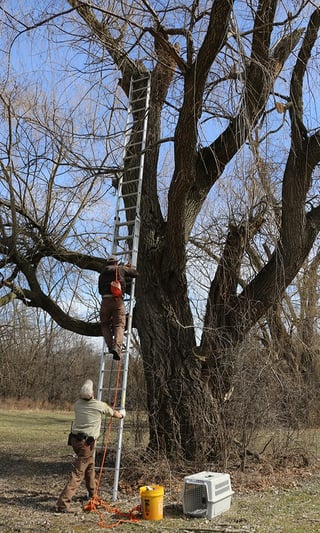 When Carlson arrived he carefully placed the owlet in the nest with its two siblings, and the separated wild family was united once more! "The intimate interaction I had with this owlet made me realize just how connected to nature we all truly are," says Carlson. "The land we use and the trees we value are not just for our enjoyment. They are also important habitat for really beautiful creatures." 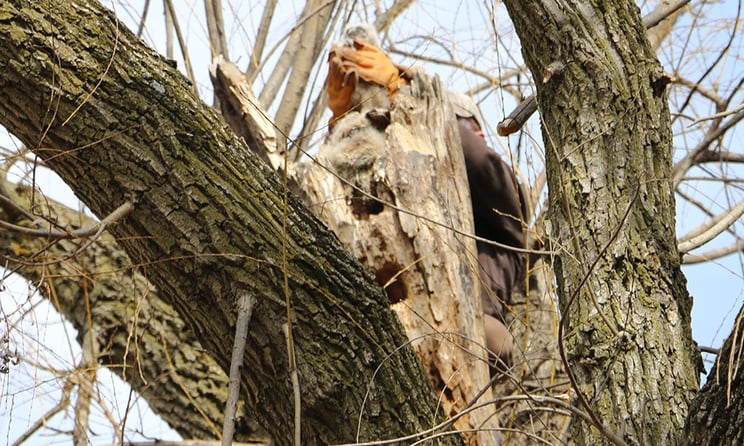 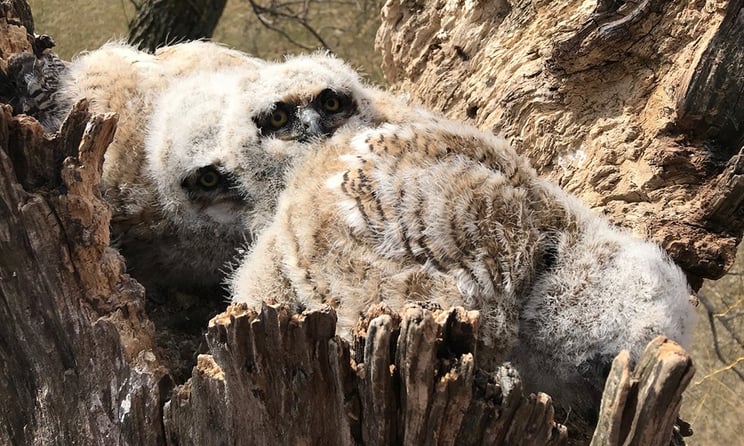 According to our wildlife experts nestlings don't fall from nests too often, but they can be tossed on occasion. A tumble — like this one — may happen during a high-wind event, being pushed by a predator or even outgrowing the nest. “Because these owlets are getting closer to fledgling stage and will be growing even bigger, they do stand a greater chance of falling out of the nest again," says Willowbrook Site Manager Sandy Fejt.

The District will keep an eye on the owlets in the days ahead and may even consider putting up a nesting platform in the tree to prevent future tumbles.

Grounds Management Manager Mike Wiseman says the teamwork between our foresters, rangers and the wildlife rehab center is a long-lived relationship. “Our forestry crew has assisted Willowbrook for years with returning fallen raptor babies to their nests,” says Wiseman.  "Sometimes even the nest has fallen from the tree, so we install a platform to serve as a new nest to house the baby raptors and provide them safety.”

An owlet will begin to explore its world and venture from its nest onto nearby branches, called “branching,” at about six-weeks old. At seven weeks the owlet is able to take up to three or four brief flights per day to spread its wings and strengthen its muscles.

The fledgling cannot fully fly until about 10 to 12 weeks. Fledgling siblings will
stay together after leaving the nest and take up in a nearby tree for several weeks. Their
great-horned owl parents will return and feed them over their first few months, delivering small pieces of prey.

Moving into spring breeding season, Willowbrook Wildlife Center reminds residents it’s normal for wild animals to leave their young alone for several hours at a time while they look for food. Inexperienced individuals who try to raise or treat them inevitably produce unhealthy, tame animals that can’t survive in the wild. Human intervention may be helpful, though, if an animal is injured or truly abandoned.

You can also help us help wildlife. We appreciate your donation to care for orphaned wildlife.