DuPage Monarch Project is a collaboration of four local environmental organizations, each contributing essential resources of science, education, community organizing and public art to the shared mission of protecting monarch butterflies and pollinators. All are important.

Science establishes a knowledge base for implementing and evaluating conservation measures; educators provide public officials with background information needed for effective policies; and community organizers bring people together for restoring and creating habitat. Art helps shape the cultural meanings within which conserving climate, land and wildlife makes sense, is valued and pursued.

The Forest Preserve District of DuPage County, a DuPage Monarch Project partner, adapted to the pandemic’s impact by shifting its community engagement from in-person programs to innovative uses of videos and social media. A pollinator-themed art exhibit scheduled for Mayslake Peabody Estate in May 2020 became a virtual Facebook show in 2021. Some aspects were lost in the online format, like the comingling of artists and audience at an opening reception, but more importantly, it preserved the power of art to engage viewers on a critical environmental issue while other forums were unavailable.

Art is a force that both reveals and shapes cultural understandings of nature and the environment. Ellen Corr, director of art partnerships for the Natural Resource Defense Council, has been engaging new audiences on environmental issues through visual art for the past decade. She uses art to tell the story of crises like climate change and pollinator decline in ways that inspire people to be part of the solution.

Corr’s first artistic collaboration in 2012 took on the issue of the degradation of the Chicago River with an installation by Maya Lin, a nationally recognized designer, sculptor and environmental activist. Reversing the Flow, Lin’s topographical map of the Chicago River made entirely of pins brought attention to NRDC’s efforts to protect it from the dumping of raw sewage and the introduction of invasive species like Asian carp.

Two years later Corr and artist Jenny Kendler tackled the issue of declining monarch habitat. Kendler designed a traveling food car with balloons filled with milkweed seeds for distribution at events in St Louis and other cities. Passersby were encouraged to take a balloon, popping it where monarch habitat could take root in a new location.

The food cart’s message inspired Tom Weisner, then mayor of Aurora, Illinois and known for his commitment to sustainability and green initiatives, to reach out to the Illinois Tollway Authority about their mowing practices. It was the beginning of rethinking the frequency and timing of mowing along the nearly 300 miles of the state’s roadways by taking into consideration the impact on monarch butterflies and pollinators.

Art makes a difference. Posting "Pollinators in Action: Flowering Journeys" on Mayslake's Facebook page in the waning months of the pandemic made a significant contribution to the conversation about the plight of pollinators during a year when the majority of DuPage Forest Preserve District programs had been cancelled.

The virtual exhibit received 26 submissions, many of which zeroed in on the essential relationship been pollinators and flowers. Close up, intimate views of bees and butterflies on flowers showcased tiny creatures playing a starring role in the lives of plants and the animals and people relying on them for food. The connection between pollinators and people was implied as people didn’t appear except in a portrait by Ann Grill of a beekeeper in full gear.

The pollination services provided by honeybees is primarily a commercial enterprise owned and managed by people, different than that of most native species of bees whose life cycles are naturally intertwined with flowers. People have a complex and complicated relationship with pollinators; from raising honeybees to diminishing the availability of habitat for native species and exposing both to diseases and pesticides.

Three works in the exhibit explore aspects of the people-pollinator relationship that offer novel ways of seeing it. 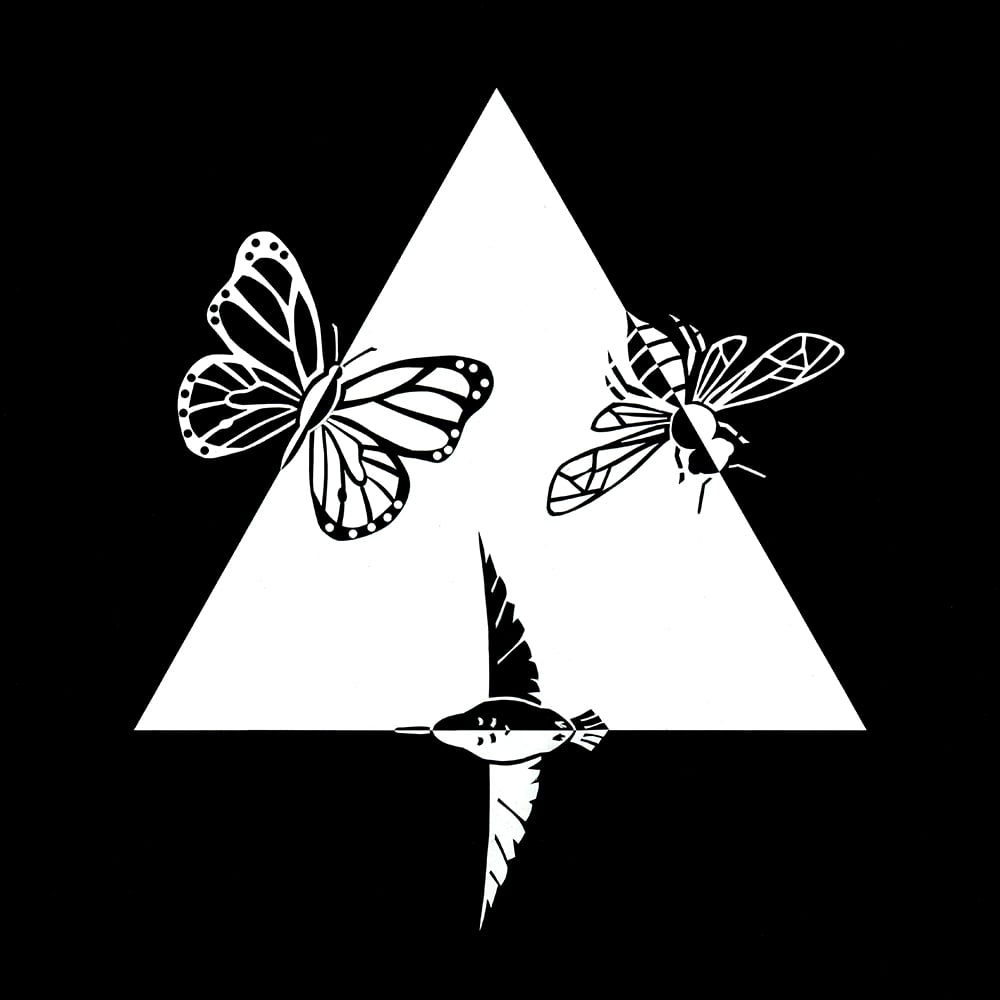 A hand-cut paper piece by Sharon Gurley features a bee, butterfly and hummingbird, each one positioned on a side of a white paper triangle set against a black background. The common origin for all of them from a single sheet of white paper subtly illustrates how several species share the same habitat and the importance of each occupying a separate niche. Bees, butterflies and hummingbirds pollinate different flowers, at different times of the day and year yet all are necessary for a healthy eco-community, just as each are necessary to the composition of Seeking.

The choice of black and white allows the eye to focus on the finely carved minute details of this piece and the many precise cuts it required. The scale and intricacy of the design deserves the same close attention as watching busy pollinators at work, flitting from flower to flower throughout the day and into the night, collecting grains of pollen and depositing them on barely visible floral structures.

There is a stark reality about this piece, as though Gurley is boldly confronting a time when half of insect species have vanished. She has literally carved the pollinator out of its habitat, casting the ghostly white halfling into empty space, leaving its shadow behind. It is a vision of when memories of bees and butterflies outnumber them. 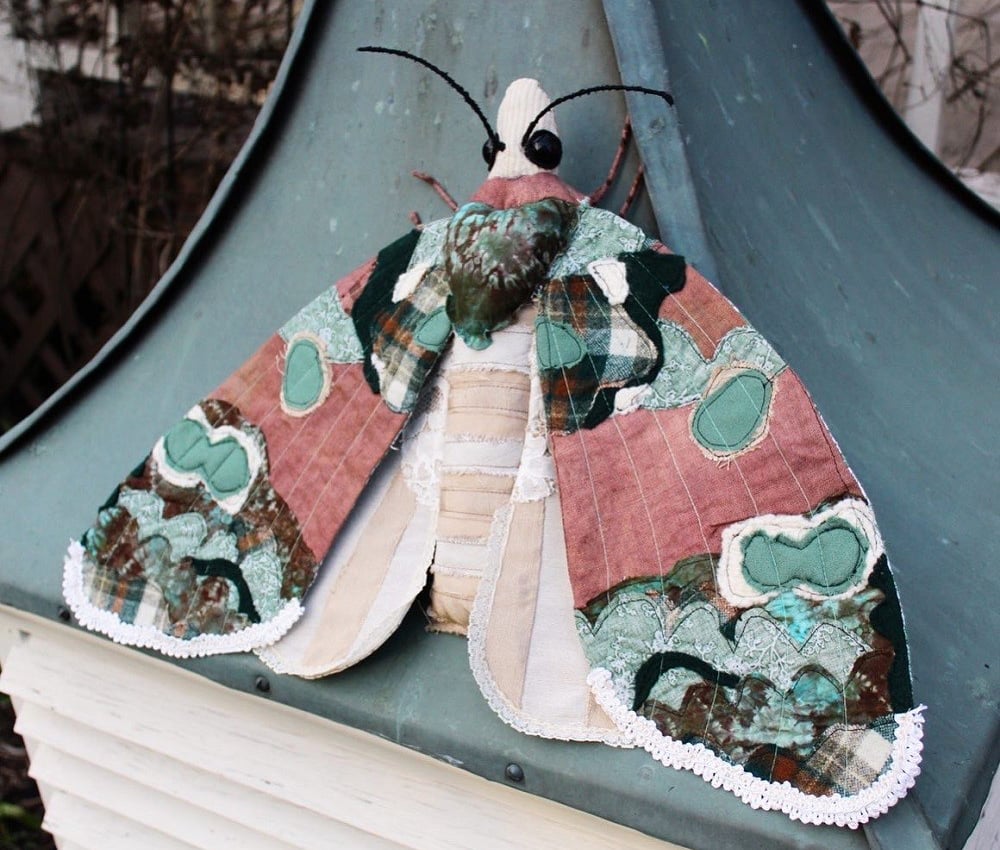 Little is known about the contribution moths are making to pollination. They work at night, unseen, unnoticed. Mention moths and thoughts quickly turn to sweaters with holes, trees stripped of leaves or critters showing up in the cupboard invading your food. The many small, brown- and beige-colored species flying about in the dark simply fade into the background, vanishing from awareness, brought to mind only to take the blame when damage is discovered.

Moths have a PR problem that Emma Bolton aims to change by showing us their warm fuzzy side.

Bolton crafted a new image for the marbled-green leuconycta by sculpting a larger-than-life version from fabric. She reminds viewers moths are beautiful through her choice of lichen green and pine bark browns evoking a forest’s peaceful serenity. The rounded softness of the fabric is the look of a cuddly stuffed animal, transforming the moth from being deplorable to adorable. Suddenly this marbled-green leuconycta needs a common name like prairie jasper that rolls off the tongue while conjuring an image of a precious stone. Curiosity is piqued to learn more about a creature with such a lovely name.

Little is known about the marbled-green leuconycta beyond its taste for common dandelions. It’s time to shine some light on the lesser-known pollinating activities of night-flying moths, such as the structure of the flowers they visit, whether the species they visit at night are also visited by daytime pollinators and how pollen is being transferred. A full accounting of all current pollinator practices is essential, including the contributions made by moths, before too many species are lost and a cascade of extinctions follows. 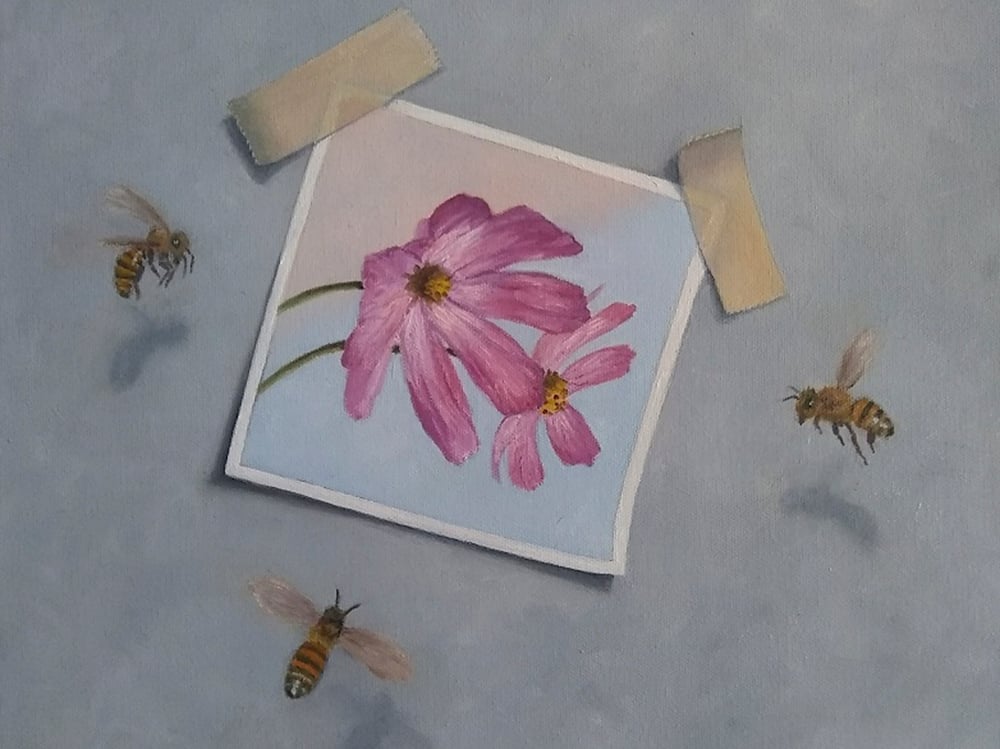 Bees to Flowers by Kirk Kerndl

In the description of his oil painting titled Bees to Flowers, Kirk Kerndl wrote, “I want people to look at my work and have it captivate them so they ... think about it.” This thoughtful painting does exactly that.

The first moments of looking at Kerndl’s painting are spent sorting out its seemingly disparate elements. There are three bees hovering around a painting of a flower stuck to a plain, slightly mottled background by two strips of tape. The composition is austere, a generous space sparsely occupied by a few elements, leaving the viewer to figure out the story connecting three bees, a paper flower and tape.

The bees in the painting appear frozen, suspended in air without context, with no hint of where they came from or where they’re going. Habitat is absent, there’s no nectar, no pollen to sustain them, only a paper flower, an illusion of sustenance held in place by band-aid colored tape. The painting is a depiction of what’s missing, of absence and loss.

The similarity of the tape to band-aids implies a need for healing but also sends a warning to find a lasting solution for the injury, not a quick temporary fix. Paper flowers aren’t the solution and it’s up to us to find a genuine one.

More habitat, less pesticide and a stable climate are the solutions to pollinator decline but they require people who care. "Pollinators in Action: Flowering Journeys" reveals the beauty, diversity and enormity of what is being lost, leaving viewers with a medley of feelings; delight, sadness, and hope for a future where people and pollinators can thrive together.

Sharon Gurley is a lifelong resident of DuPage County with a strong affinity for nature. Her preferred mediums are paper and ink, often limiting her palette to black and white.

Emma Bolton is an artist based in the northwest suburbs of Chicago who enjoys creating in every way imaginable. She primarily works with fabric, creating both two-dimensional and sculptural pieces.

Kirk Kerndl is a realist oil painter and sculptor from Lombard, Illinois.  He draws inspiration from the tranquility of the Midwestern landscape and finds beauty in ordinary things.  Kerndl is drawn to capturing light, stillness and isolation in his paintings.  He finds the understated calmness of his work provides a counterbalance to the chaos of everyday life.

Lonnie Morris is coordinator of the DuPage Monarch Project, which advocates for monarch and pollinator conservation by enlisting cities, villages and park districts throughout DuPage County to manage their lands with pollinator friendly strategies.