Getting to the Bottom of Brumation

The groundhog might get all the press for its ability to spend winter hibernating in its den, but it’s not the only example of DuPage wildlife that slow things down this time of year.

Animals have a lot of strategies for dealing with winter. In fall, when temperatures and sunlight send clear signals that it’s time to prepare for colder weather, some animals fatten up to ready for the leaner times ahead. Others fly south to avoid conditions altogether. A handful of mammals, the groundhog included, hibernate, spending extended periods of inactivity underground, where heart rates, breathing, and body temperatures drop. The county’s cold-blooded animals have a similar strategy, although one scientists give a different name.

“Brumation” is the prolonged period of decreased metabolic rate amphibians and reptiles undergo to cope with winter, but the specifics can vary by species.
Frogs with their thin skins are susceptible to environmental pollutants and can seem rather frail, but they can be tough in other ways. To cope with the onset of winter, for instance, some frogs settle on the bottom of wetlands or lakes with oxygen-rich waters. Others stay on land and either burrow in the soil or work their way under rocks or logs.

Some wood frogs in particular have a simple yet amazing technique: They bury themselves under the leaf litter and freeze.

As a wood frog cools, to conserve moisture, it no longer passes urine. Instead, the urea is added to the animal’s blood, where along with glucose from sugars in the liver it acts as a sort of antifreeze that the heart circulates throughout the body. This doesn’t stop the freezing process, but it does protect cells as they freeze by retaining critical moisture. As temperatures drop, more of the frog will freeze, and when most of the frog is frozen, the heart and lungs eventually stop. As spring approaches, though, the wood frog begins to thaw and the heart to pump, returning all organs to their normal functions.
It’s not surprising that medical doctors are studying  the wood frog. An understanding of how its body can function with exceptionally high glucose levels may lead to breakthroughs in diabetes care. Learning how cells and organs can survive prolonged periods of low oxygen may lead to improved recoveries for stroke and heart attack patients as well as better care for organs used in transplants.

Scientists study wood frogs for their ability to spend winter frozen below the leaves without any tissue damage. Image by mcaple/CC BY-NC 4.0 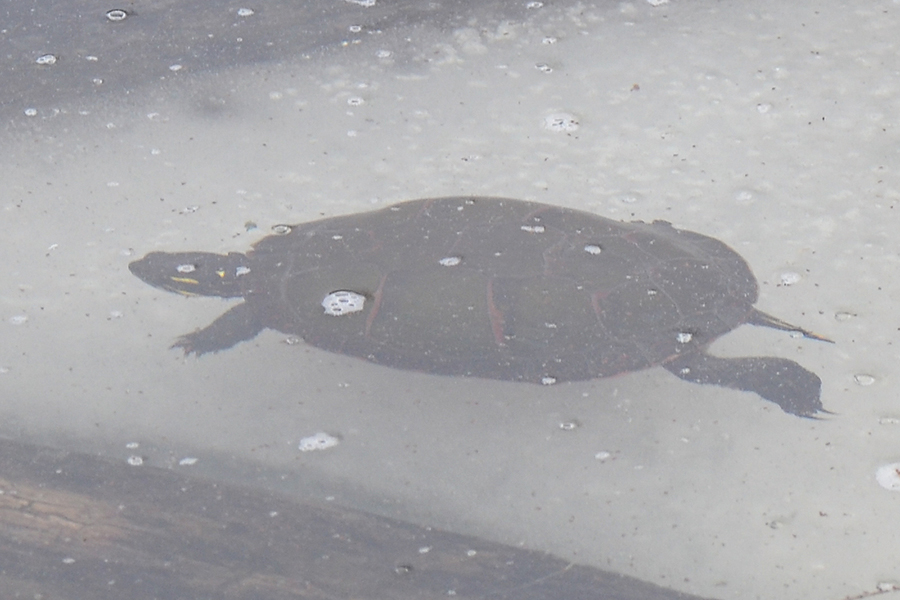 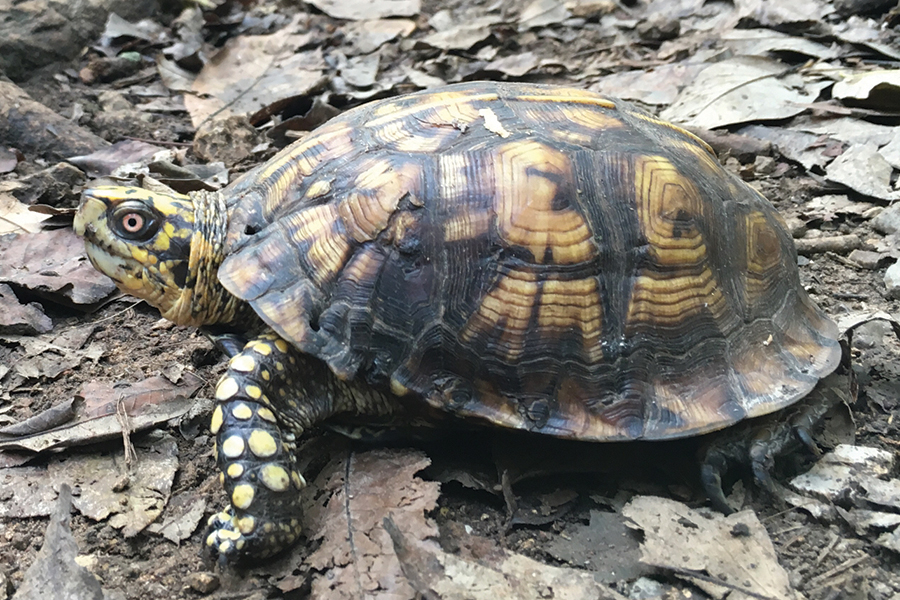 Box turtles and other terrestrial turtles bury themselves in the soil below the frost line to wait out winter. Image by Jesse Rorabaugh/CC BY 4.0 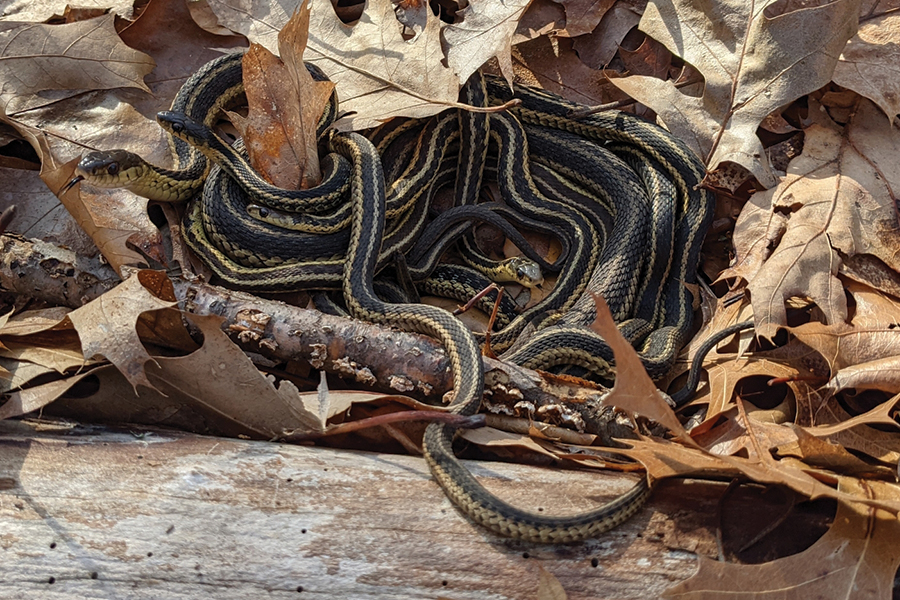 Snakes, such as these eastern garter snakes, spend winter in groups in protected areas call hibernacula. Image by LilyM/CC BY-NC 4.0

Turtles have similar brumation strategies. In summer a turtle’s heart may beat 40 times a minute, but during the coldest part of winter, it may only beat one time every 10! Still, even with such a dramatically reduced metabolic rate, a turtle needs to take in oxygen and to remove carbon dioxide that builds up in the blood. For terrestrial species, such as box turtles, which burrow into the soil below the frost line, this isn’t an issue; but for aquatic turtles, such as painted turtles, that settle into the muck at the bottom of ponds or marshes, it takes some special breathing adaptations.

Since aquatic turtles are under the ice, they can’t breathe in the normal way by using their lungs. They instead breathe through a process called cloacal respiration.

Multipurpose sacs collectively called the cloaca bursa are situated under the turtle’s tail. They’re used for waste removal and reproduction, but their numerous blood vessels also allow them to absorb high concentrations of oxygen and to release carbon dioxide. (In a way, this lets some turtles to breathe through their butts!) Some frogs and salamanders are capable of similar respiration.

For snakes, there’s a group approach when it comes to brumation. Many species congregate in “hibernacula,” chambers (usually underground and below the frost line) that protect snakes from the cold and allow the animals to better moderate the lower temperature while maintaining oxygen and humidity levels with relatively no disturbance. Hibernacula can be in abandoned mammal dens, cracks in the bedrock, or structures such as rock walls, building foundations, or railroad beds. Snakes with less tolerance to cold are the first to enter the hibernaculum to brumate; those with more tolerance will be the last ones in and the first ones out in spring.

It’s fascinating to learn and understand the complex abilities animals have to withstand the challenges winter presents. Next spring when you hear the first frogs calling, you’ll now understand just a little of what they went through to survive winter’s harsh conditions.

From the President
News & Notes
6,000 Years in the Making
Getting to the Bottom of Brumation