The Forest Preserve District and several partner agencies restored 2.3 miles of Spring Brook, a tributary of the West Branch DuPage River, at St. James Farm. Today the restored creek connects to the surrounding floodplain, where nutrient-rich floodwaters flow into the forest preserve and its newly created wetlands. The floodplain stores and filters stormwater during heavy rain events. Read more about this restoration project (link).

The main entrance is located on the east side of Winfield Road 0.25 mile north of Butterfield Road. Equestrians (horse trailers) and special-use permit holders should use the entrance at Hoy Avenue, which is open May 1 – December 1. 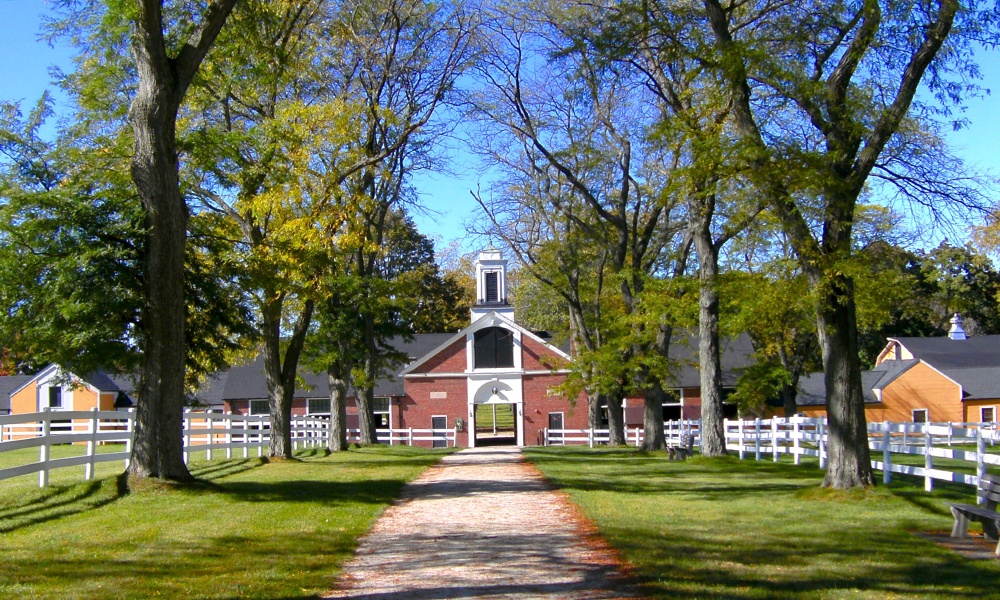 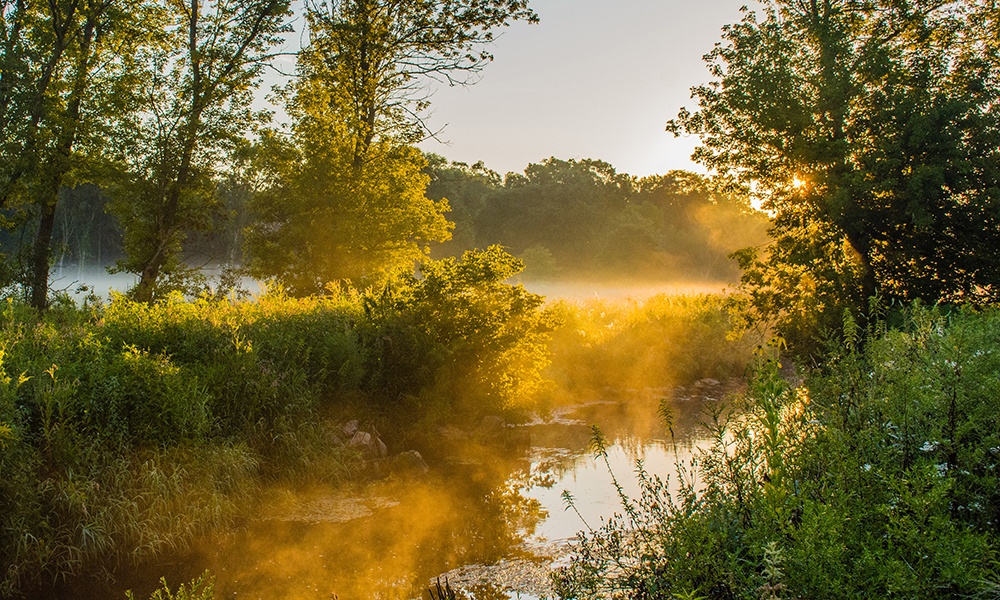 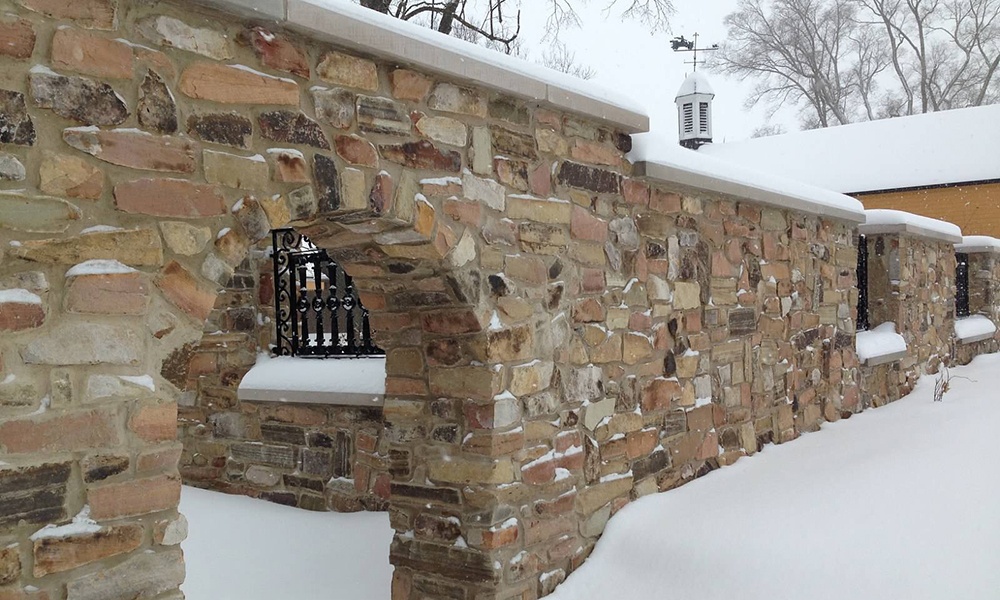 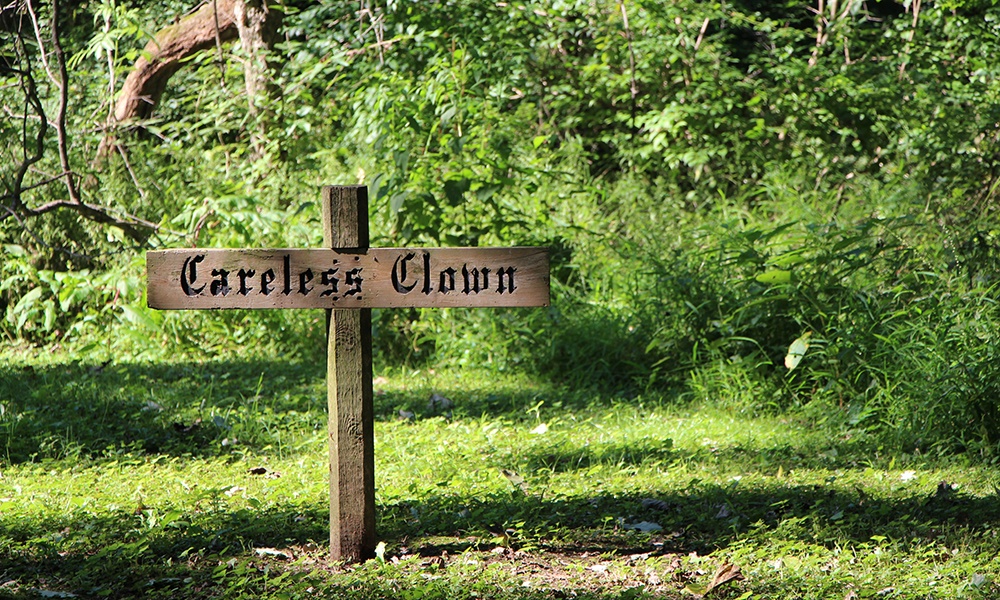 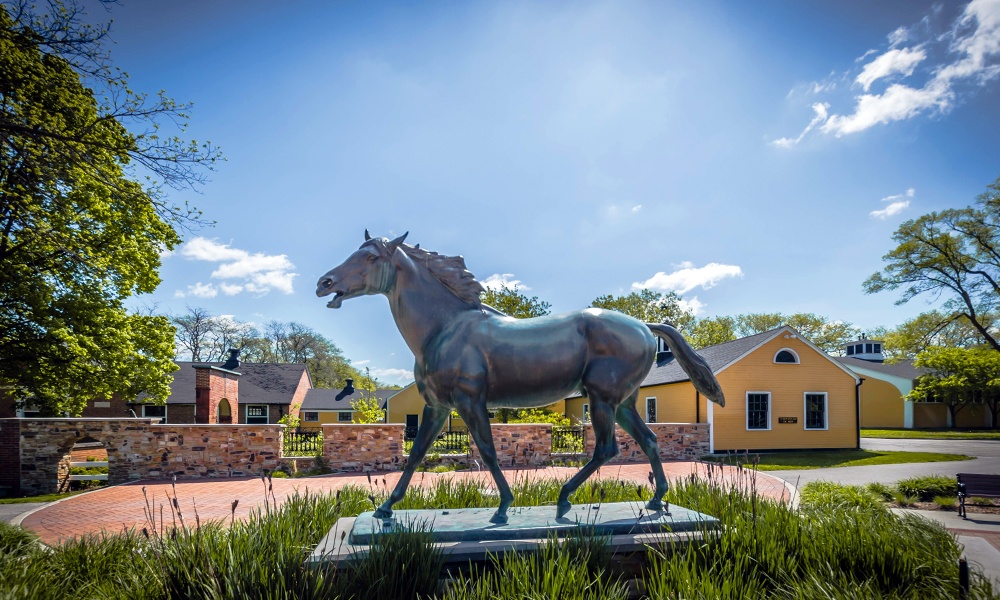 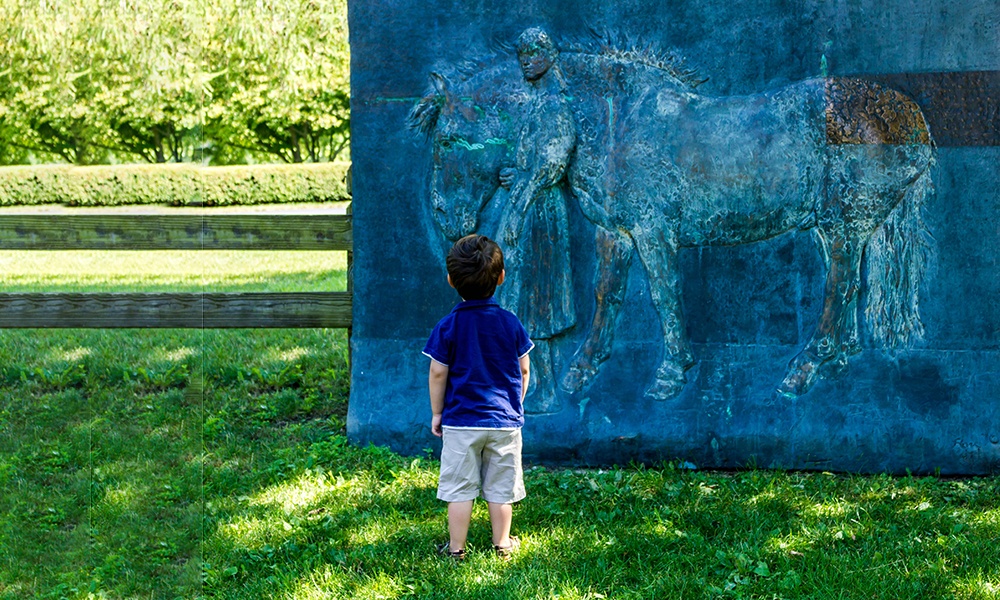 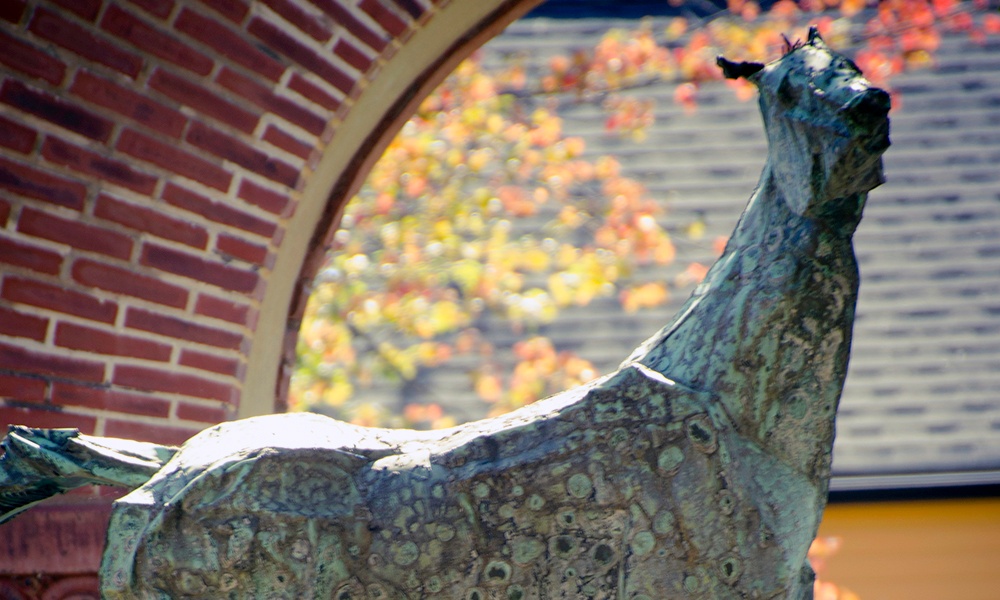 Many pieces commissioned by the McCormick family remain at the forest preserve today.

This life-size bronze sculpture of Stanhope Joel’s 1945 St. Leger Stakes champion is a reproduction of a piece by British artist John R. Skeaping. In 1965 Joel commissioned Skeaping to create the original for his breeding farm in Newmarket, England. Skeaping worked for nine months to complete the piece using photographs and his understanding of horse physiology. Brooks McCormick commissioned this second pouring in 1966.

Fiona and Something Special Relief

In 1987 Brooks McCormick commissioned Fioré de Henriquez to create a bronze relief of his granddaughter Fiona and her horse Something Special. Like other relief artists, de Henriquez used clay originals to create intermediate casts, which she then used to form the final sculpture.

Marcia Weese created this granite, marble and copper fountain in 1985. According to Weese, “The fountain is balanced in perfect symmetry, and the two-ness of the forms refers to horses gathering at the watering hole to drink communally. The rolled edges of the marble pools look and feel like the muzzle of a horse.” Although the fountain was created for aesthetic reasons, equestrian competitors often used it to water their horses.

Carole Harrison brazed and then appliquéd sheets of copper to create this abstract, which she completed in 1962. Hope McCormick reportedly purchased it as a gift for her husband, Brooks.

To augment the landscaping in the farm’s courtyard, the McCormick family installed the columns and archway from the entrance to the old William Deering and Company facility. The stone wording on the wall is from the McCormick Reaper Manufactory. The International Harvester Corporation insignia is on the west end of the wall, and tablets from International Harvester Tractor Works and Milwaukee Works hang from the wall and columns.

This art deco oil painting above the stable’s west entry dates back to Chauncey and Marion McCormick’s time at the estate in the 1930s.

“I Saw a Child” Relief

Artist Ann Frey received inspiration for this piece from the poem “I Saw a Child” by John Davies, a renowned expert on therapeutic riding. Brooks McCormick hired Davies in 1974 to direct equestrian operations at the farm and shortly thereafter opened the St. James Riding School for the Handicapped. The relief, which Frey completed in 1986, commemorates the school, which married McCormick’s passion for horses with a greater philanthropic cause.

This fountain of three life-sized leaping dolphins is by Italian sculptor Fioré de Henriquez, who worked with clay, stone and bronze.

The first Europeans to settle on this land were farmers, and several structures from late-1800 farmsteads remain, including a gabled-roof-and-wing farmhouse, one of the last of its kind in DuPage County. A massive wood-planked German-style barn with cantilevered floors dates back to 1890, if not earlier, as do the remains of another barn’s fieldstone foundation.

For decades, though, the property was the retreat of the McCormick family. Chauncey and Marion McCormick acquired the initial 203 acres in 1920. Chauncey was the great nephew of Cyrus McCormick, who invented the first commercially successful mechanical reaper and in 1851 co-founded the McCormick Reaper Works, which merged with the Deering Harvester Company in 1906 to become International Harvester Corporation.

To accommodate their interest in horseback riding, the couple built a colonial-style brick stable with stalls lined with wood and iron posts from England. To support their growing award-winning herd of Guernsey cows, they constructed a state-of-the-art dairy barn with roomy stalls and assorted outbuildings. For the better part of two decades, the buildings housed a dairy operation that was a benchmark for farmers throughout the Midwest.

In the late 1950s, the property passed to the McCormicks’ son, Brooks, who managed the estate with his wife, Hope. They built the estate’s indoor arena, which not only accommodated their black-tie events but also later served as the St. James Riding School for the Handicapped, one of the McCormicks’ charitable interests.

After his retirement from International Harvester in 1980, Brooks began to aggressively develop the estate’s renowned equestrian facility, which grew to include a 62-stall stable for competitors’ horses, a 1.5-mile steeplechase track, a 200-seat concession area and dressage and jumping arenas. St. James Farm hosted several international eventing and dressage competitions and an annual steeplechase race, which drew up to 14,000 spectators and raised funds for the Marianjoy Rehabilitation Hospital.

In 2000 Brooks McCormick sold the 607-acre St. James Farm to the Forest Preserve District of DuPage County, retaining a life estate that gave him the right to live on the property until his death in 2006. In July 2007 the District officially took possession of the property.