Freshwater mussels are the most imperiled animal in the world, and their presence is a strong indication of a healthy river system. As filter feeders, one adult mussel can filter up to 20 gallons of water a day, and their survival is vital to the ongoing health of a river ecosystem. The Urban Stream Research Center (USRC) has been propagating and releasing freshwater mussels since 2012.

The USRC cultivated 78 sub-adult giant floaters (Pyganodon grandis) and released them beneath floating wetlands along a section of the Chicago River in 2021, in collaboration with Urban Rivers, a nonprofit organization. 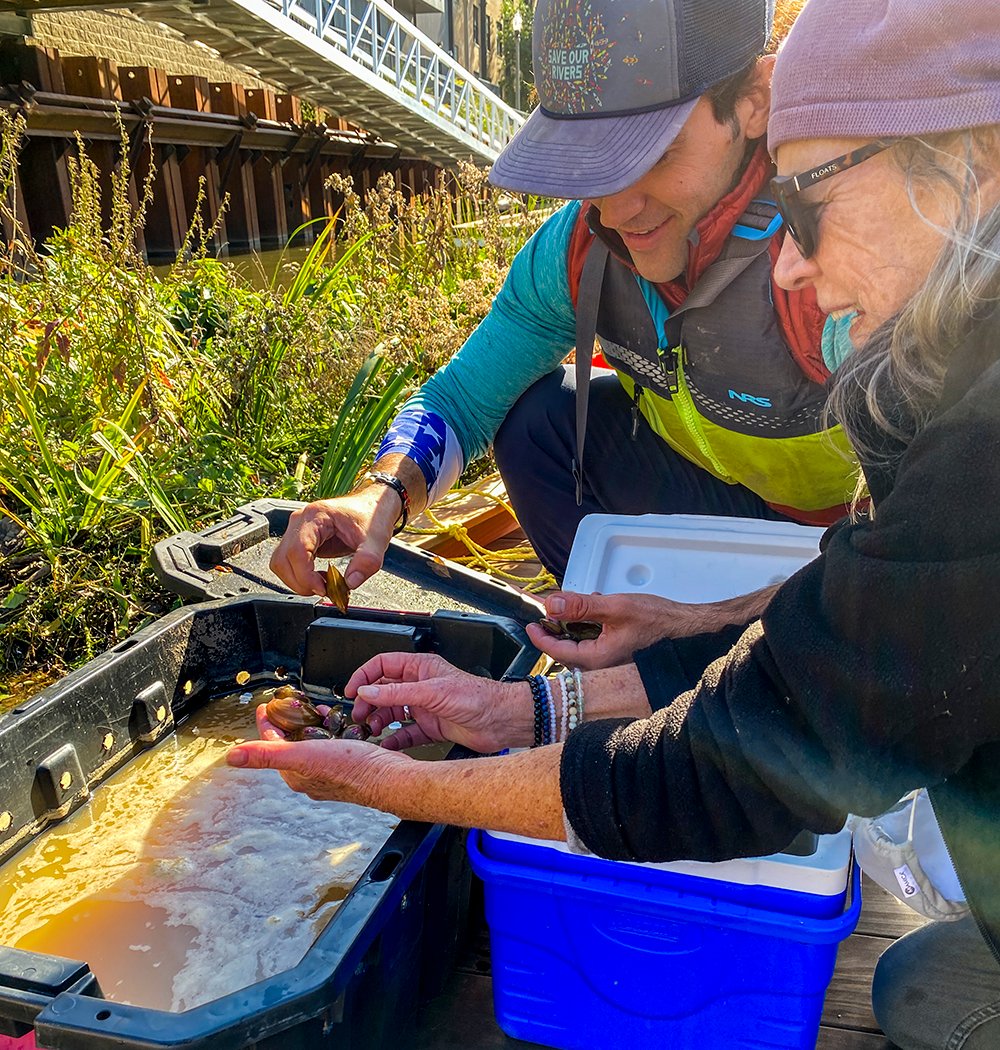 Staff check on giant floaters that are being released into the North Branch of the Chicago River as part of Urban Rivers' Wild Mile project.

Their flagship project, called Wild Mile, calls for creating a milelong floating park on the North Branch of the Chicago River by constructing floating wetlands between Chicago and North avenues on the east side of Goose Island.

As a part of this habitat enrichment project, Urban Rivers is using the ecosystem services of freshwater mussels for their floating wetlands. USRC ecologists will continue this great partnership in 2022 by propagating more sub-adult mussels for Urban Rivers. 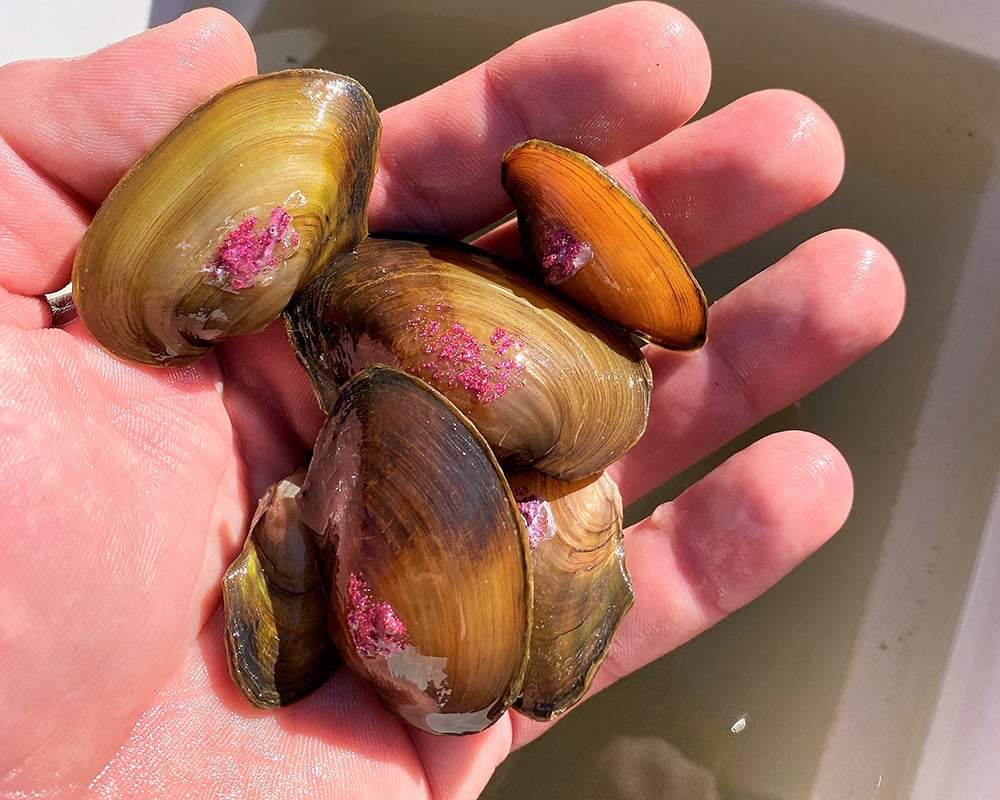 Some of the giant floaters that were released in the North Branch of the Chicago River as part of the Urban Rivers' Wild Mile project.

In fall 2021, 51 sub-adult plain pocketbook (Lampsilis cardium) propagated at USRC were released into the Fox River watershed in partnership with the Forest Preserve District of Kane County (FPDKC). 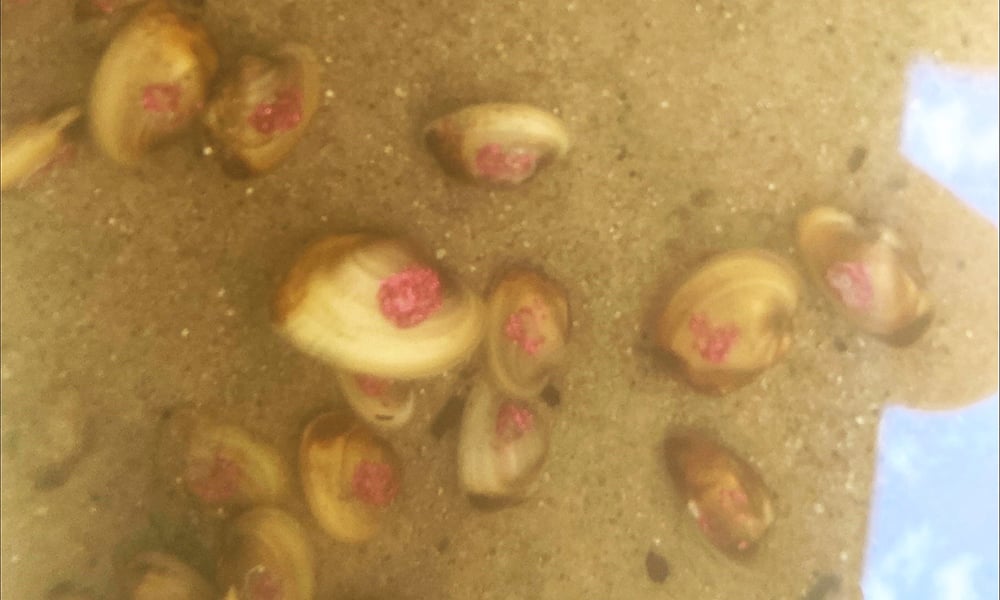 Tagged plain pocketbook mussels before their release in the Fox River watershed in Kane County.

This partnership to augment freshwater mussel populations in FPDKC streams will continue into 2022. Currently, the USRC is rearing juvenile elktoe (Alasmidonta marginata), fluted-shell (Lasmigona costata), and fat mucket (Lampsilis siliquoidea) for release into FPDKC streams once the individuals are big enough. 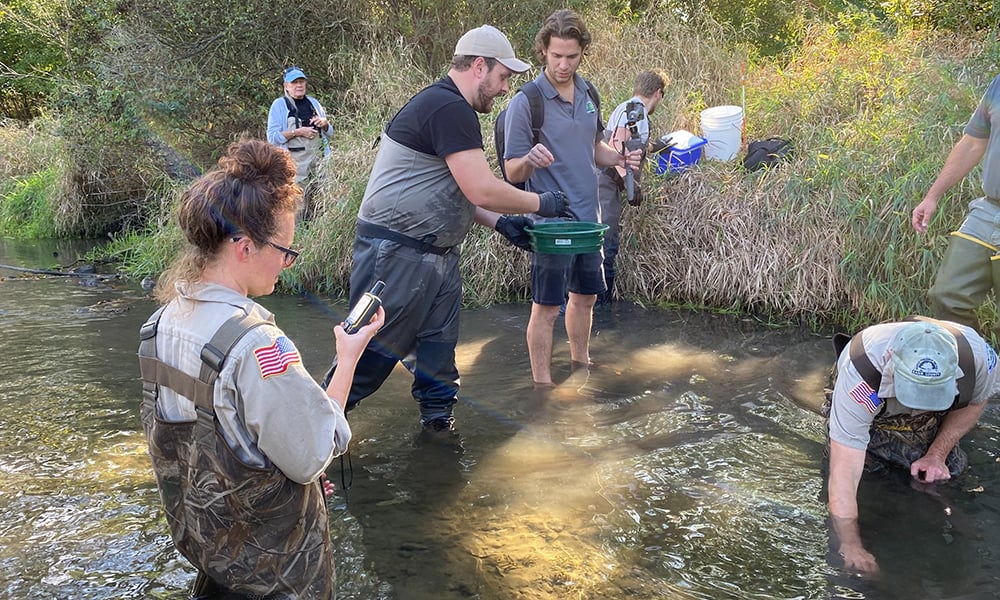 USRC ecologists propagated 366 giant floaters (Pyganodon grandis) and released them into the streambed of the recently restored Spring Brook at St. James Farm Forest Preserve, which is part of the Des Plaines River watershed. 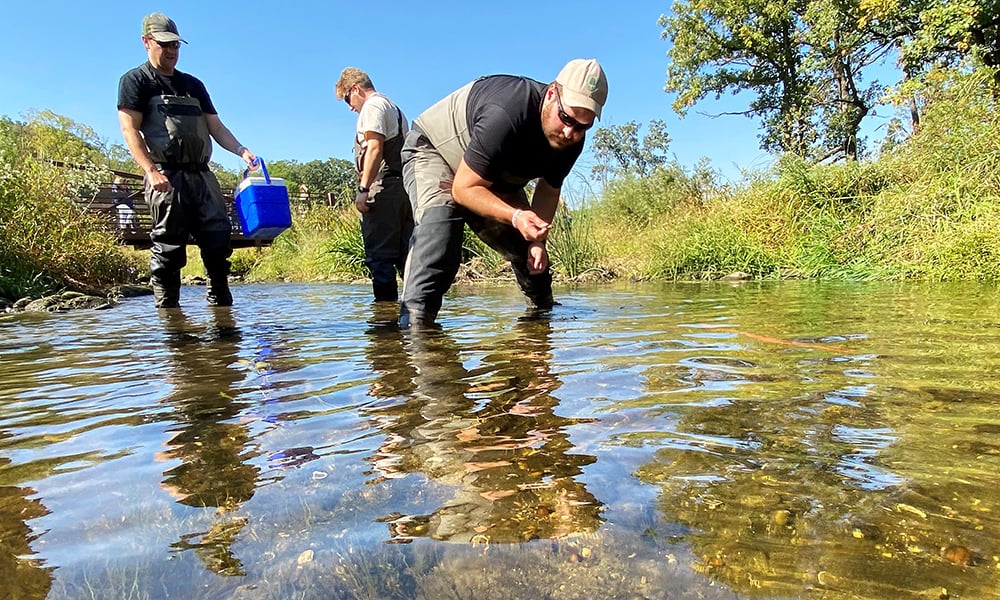 Before restoration efforts, freshwater mussels were almost nonexistent in this stretch of stream. With habitat now suitable for freshwater mussels to survive and thrive, more species will be propagated to continue augmenting this head-start mussel population for years to come. 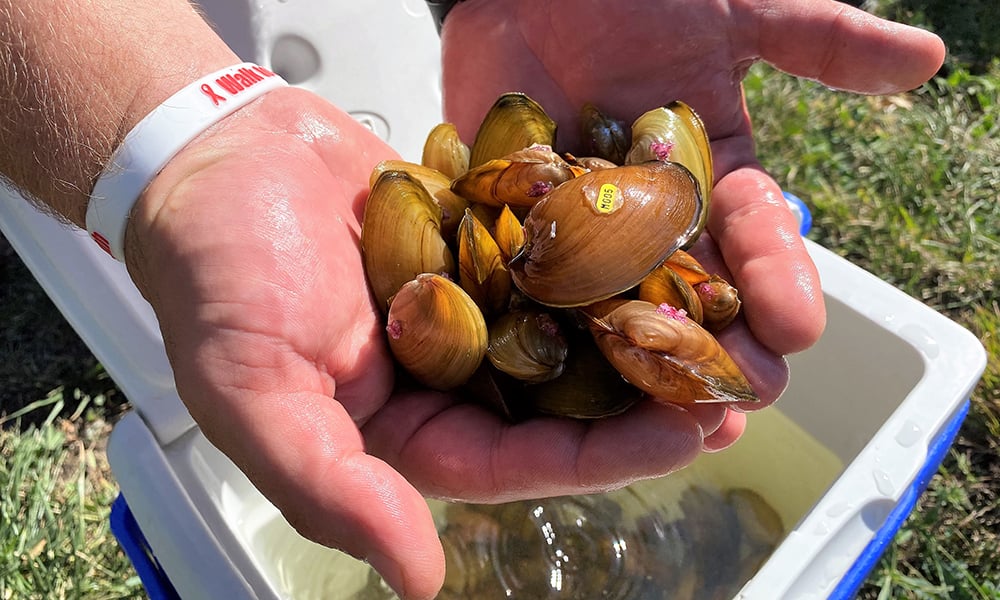 Giant floater mussels that are about to be released in Spring Brook Creek at St. James Farm Forest Preserve in Warrenville. The creek is part of the Des Plaines River watershed.

How It All Started

The Urban Stream Research Center is located at Blackwell Forest Preserve in Warrenville where Springbrook Creek enters the West Branch DuPage River. The building was funded by a grant from the National Oceanic and Atmospheric Administration. It is the result of a partnership between DuPage Stormwater Management and the Forest Preserve District of DuPage County. 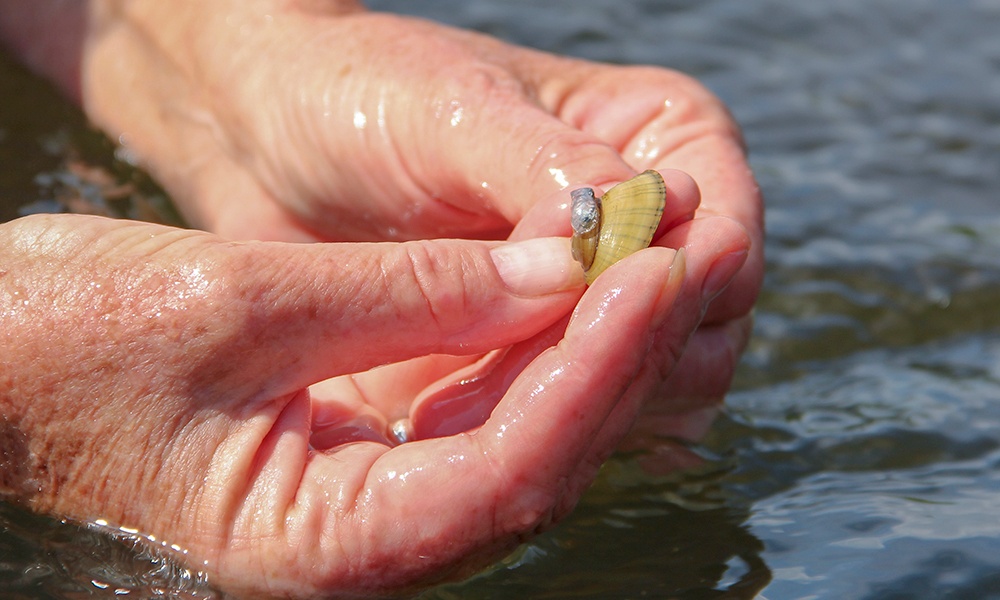 Joe Limpers is an ecologist at the Urban Stream Research Center at the Forest Preserve District of DuPage County. He brings more than 10 years of experience in natural sciences to teaching about native freshwater mussels, mussel propagation and aquaculture. He earned a B.S. in zoology from Southern Illinois University at Carbondale.