A Model of a Thriving Poultry Operation

A Model of a Thriving 1920s Poultry Operation 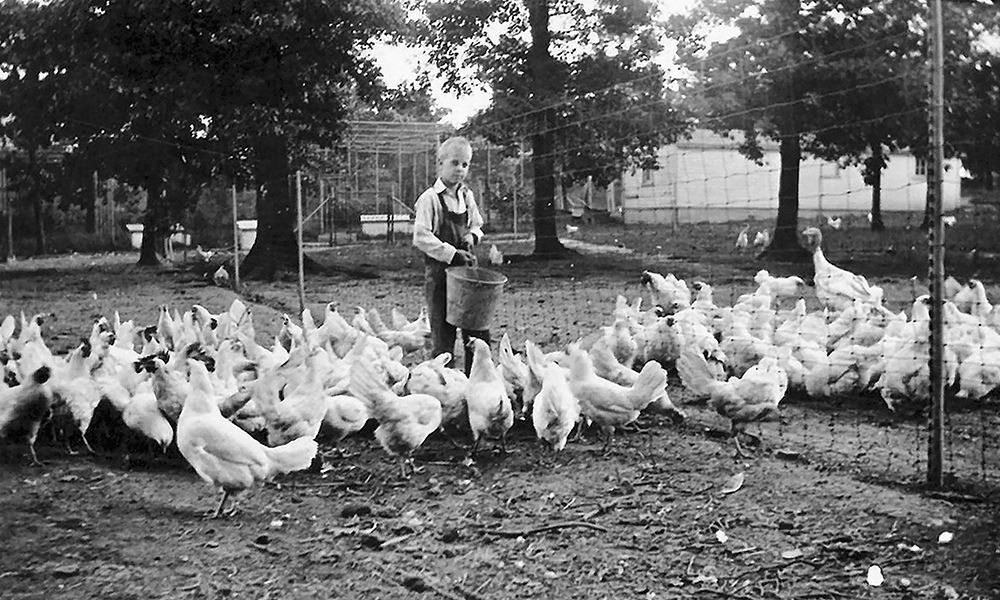 Millionaire coal baron Francis Stuyvesant Peabody is well known for his Mayslake Peabody Estate in Oak Brook, but few know that he also owned a farm on the sprawling grounds of the estate.

Peabody was one of DuPage County's "gentleman farmers" who  owned a farm for pleasure rather than profit. At a time when rural farmers were being forced into cities to find work, the luxury of owning a farm as a hobby was a uniquely American phenomena.

Explore the history of the property as a gentleman’s farm and find out about the animals, stories and people that contributed to the 848-acre property at “Mayslake Farms: A Gentleman’s Dream,” a free all-ages interactive exhibit that runs through Nov. 7 at Mayslake Peabody Estate. Hours are Monday – Friday noon – 3 p.m., and Saturdays 9 a.m. – 1 p.m.

The exhibit includes an architectural site model designed and built by Mayslake seasonal landscaper Jacob Hatley. It provides a glimpse into how the land and architecture paired with science and technology to create a thriving poultry operation. Hatley used a variety of resources to build the poultry plant architecture model, including a 1922 insurance map of the property, topographic surveys, aerial and historic photos of the farm, and a synthesis of era-specific poultry publications. 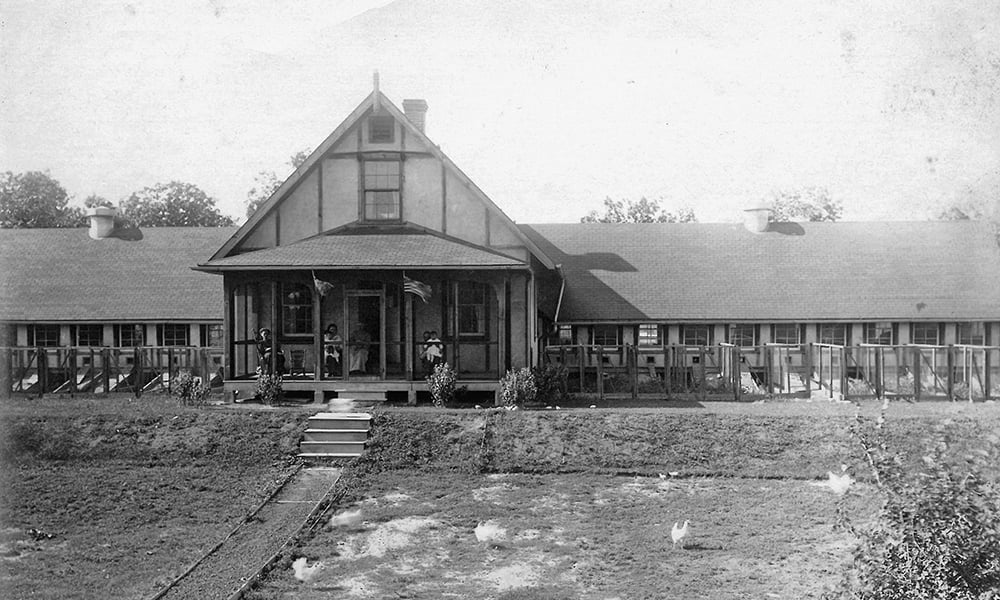 One of the chicken houses at Mayslake Farms in the 1920s.

“Studying maps, photographs, and buildings in an effort to use them as an interpretative tool allows a viewer to evaluate a time and place in history at many levels, from an appealing piece of art to helping interpret, relay, and evaluate our history.”

This large-scale operation occupied a 20-acre plot on the western end of Mayslake Farms. It consisted of 15 permanent structures and 20 – 40 temporary and movable colony houses. Improvements in sanitation, housing and technology increased productivity and allowed for the successful raising of poultry as livestock. 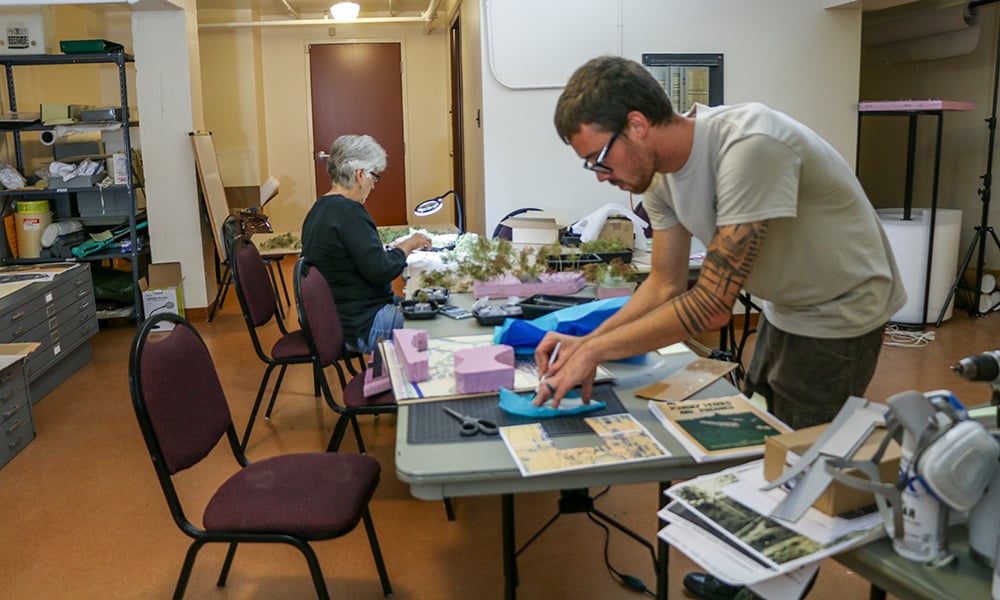 The model is 20-inch x 20-inch with a scale of 1:300, so 1 inch equals 25 feet. Using layered chipboard to create the base and show variations in typography, each piece was glued together before being sanded and painted. Form models of buildings were designed and printed with architectural details before being assembled and glued. Sea foam from England was trimmed and painted to represent trees and vegetation. The elaborate fencing surrounding the buildings was created using mesh and toothpicks. Scale figures and birds were added to complete the site model. The model will become a part of the education collection at Mayslake and help convey the history of the property to visitors. 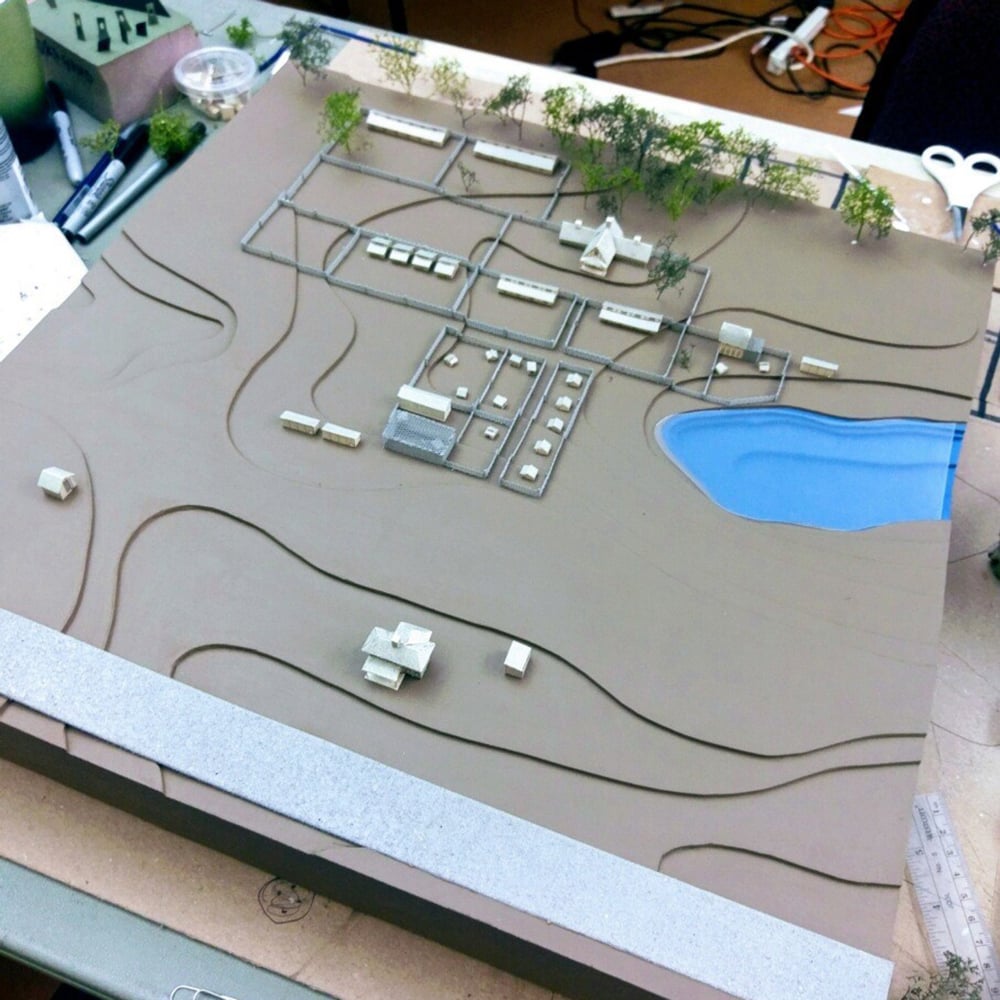 Hatley used layered chipboard to create the base of the model, which is part of the "Mayslake Farms: A Gentleman's Dream" interactive exhibit at Mayslake Peabody Estate through Nov. 7.

“The model acts as an interpretive tool on a few levels beyond illustrating a gilded-age gentleman's farm. It highlights how man improved the land to serve his needs, gives light to the changes in American diet throughout time in relation with science and technology, and lends itself as a tool to interpret history through multiple lenses,” Hatley said. “On a more technical level, it provides a vignette into how architecture can enhance a mundane operation and allow it to develop into a thriving industry.” 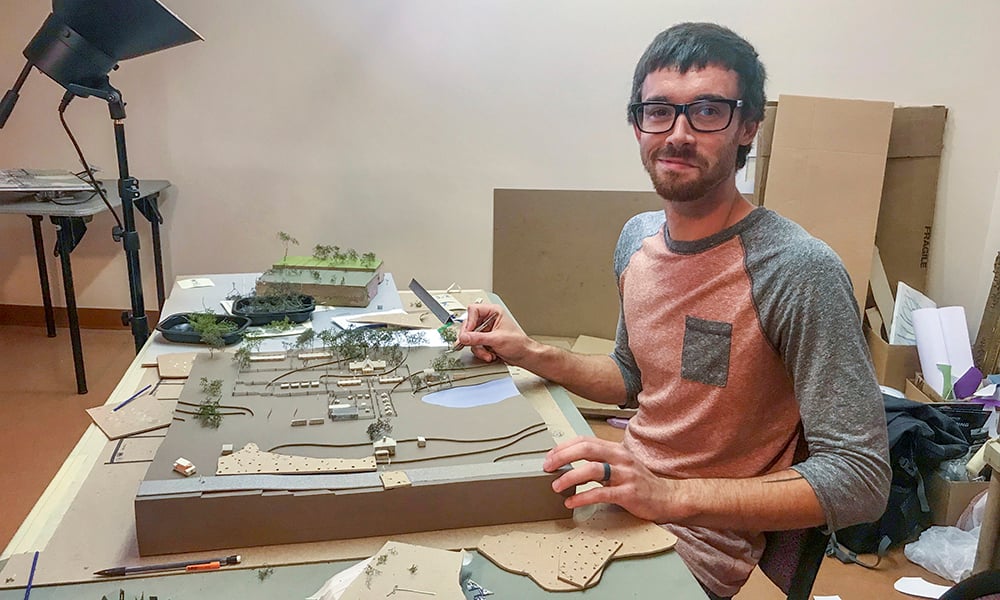 Hatley, who has an architecture background, works on the unfinished architectural site model to provide a glimpse into how the land and architecture paired with science and technology to create a thriving poultry operation at Mayslake Farms.

In addition to the challenges of working in such a small scale, Hatley immersed himself in poultry publications and articles from the 1910s. Poultry was just beginning to emerge as a major category of livestock. Hatley shares a few of the surprising things he discovered:

“I learned a lot, but two things in particular stand out: Chicken was not a leading meat source before the mastery of refrigeration and advent of diesel shipping," Hatley said. "And the life of a fowl on the plant was determined by man before long before it was born and based on its parents’ lineage." 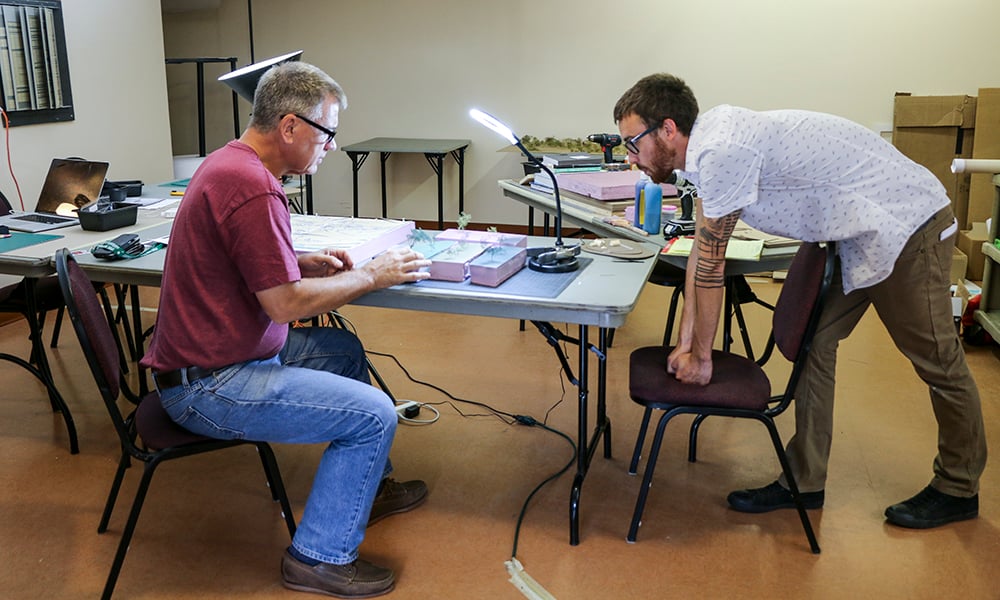 Mayslake volunteer Doug Zimmer works with Hatley on the model for the "Mayslale Farms: A Gentleman's Dream" interactive exhibit at Mayslake Peabody Estate through Nov. 7.

The exhibit is open Sept. 14 through Nov. 7, Monday – Friday noon – 3 p.m. and Saturdays, 9 a.m. – 1 p.m. Discover the history of Mayslake Farms and be sure to stop and view the model.
Discover the role gentlemen's farms played in DuPage County, and learn how several became part of the Forest Preserve District as you explore St. James Farm, Danada and Mayslake Peabody Estate during “Gentleman's Farm Tour” on Saturday, Sept. 28 from 10 a.m. to 2 p.m. All ages; under 18 with an adult. $15 per car. Register online or at 630-206-9566. 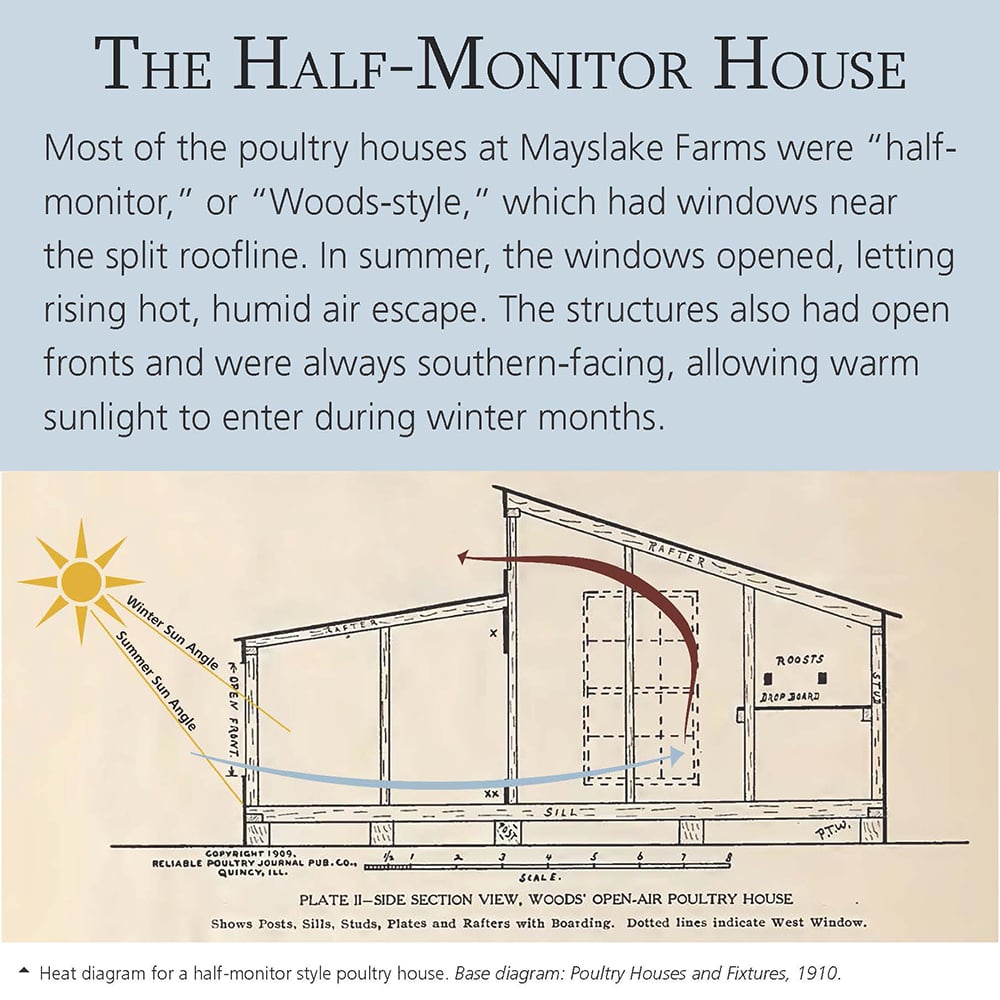