Snowy Owl Soars to Freedom After Treatment at Willowbrook 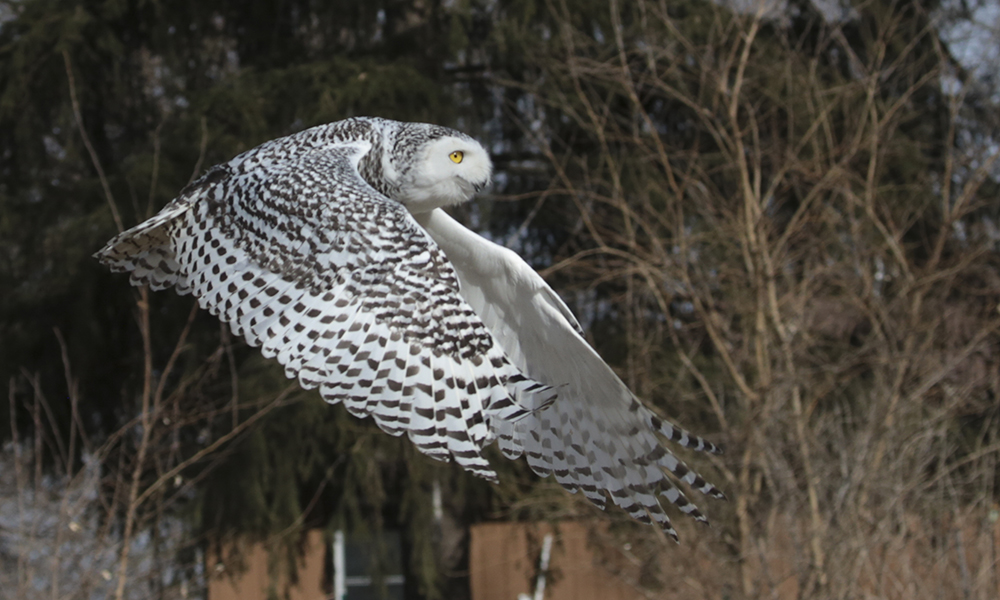 An injured snowy owl soared to freedom this week after being treated for rodenticide poisoning at Willowbrook Wildlife Center in Glen Ellyn.

The owl was eager to fly from its carrier as it was released by Willowbrook wildlife keeper Mike Wittman at a DuPage forest preserve on Monday. 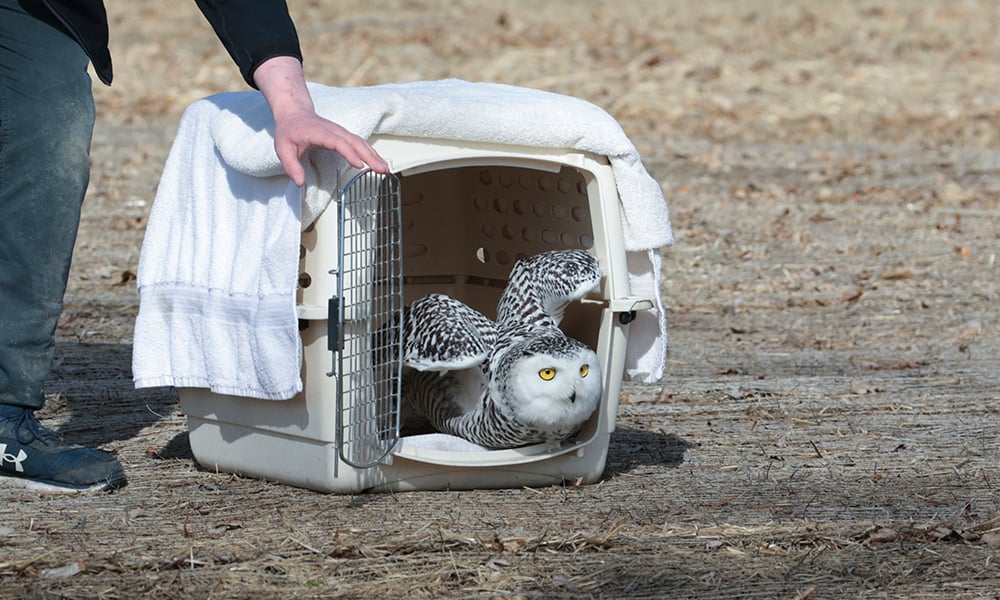 Volunteers for the Chicago Bird Collision Monitors picked up the owl in a resident’s yard in the 2400 block of West Taylor Street in Chicago on Jan 31 and brought it to Willowbrook, according to Annette Prince, director of the Chicago Bird Collision Monitors. The owl was weak, had a large amount of blood on its legs and feet, and let rescuers pick it up, Prince said. 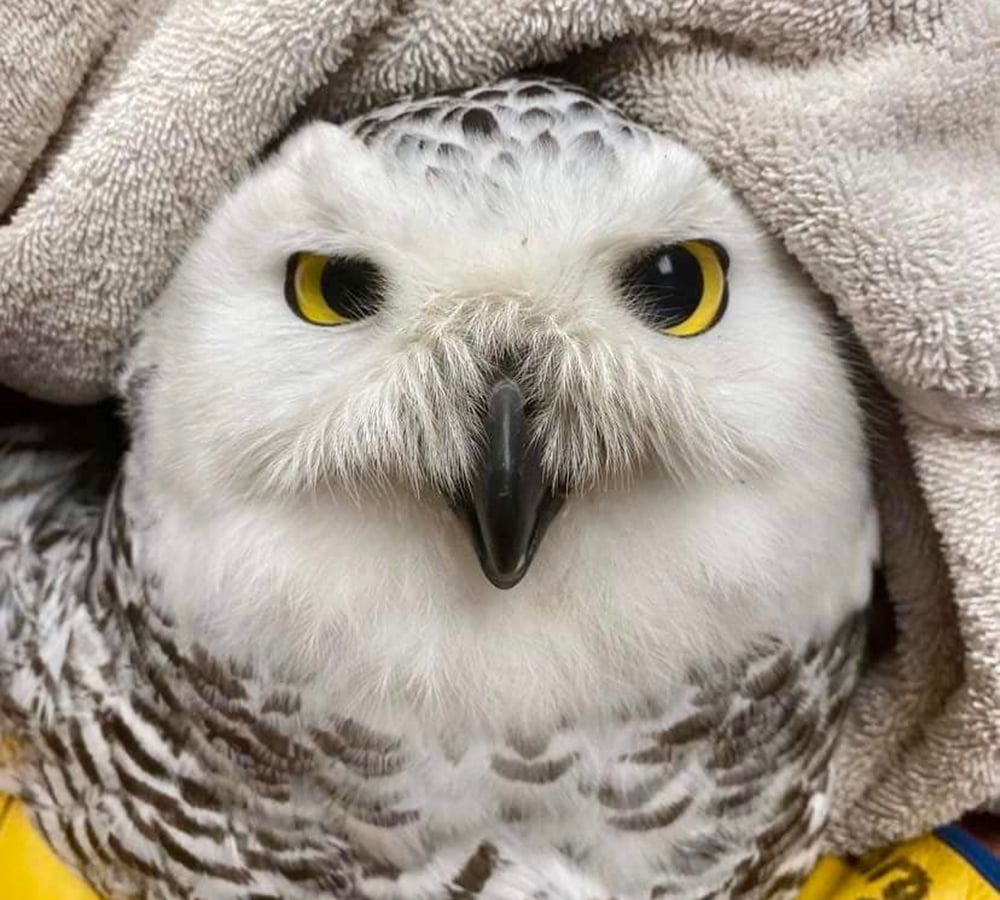 The snowy owl when it was first brought to Willowbrook on Jan. 31 by volunteers for the Chicago Bird Collision Monitors.

Upon its arrival at Willowbrook, the owl was in good body condition but very quiet for its species, had very pale mucous membranes, and despite the large amount of blood, only had a small wound on one of its legs. From the plumage, its believed to be a female. Bloodwork showed the owl was severely anemic, and her blood didn’t start to clot for more than 30 minutes (a process that should normally take 2 – 5 minutes). 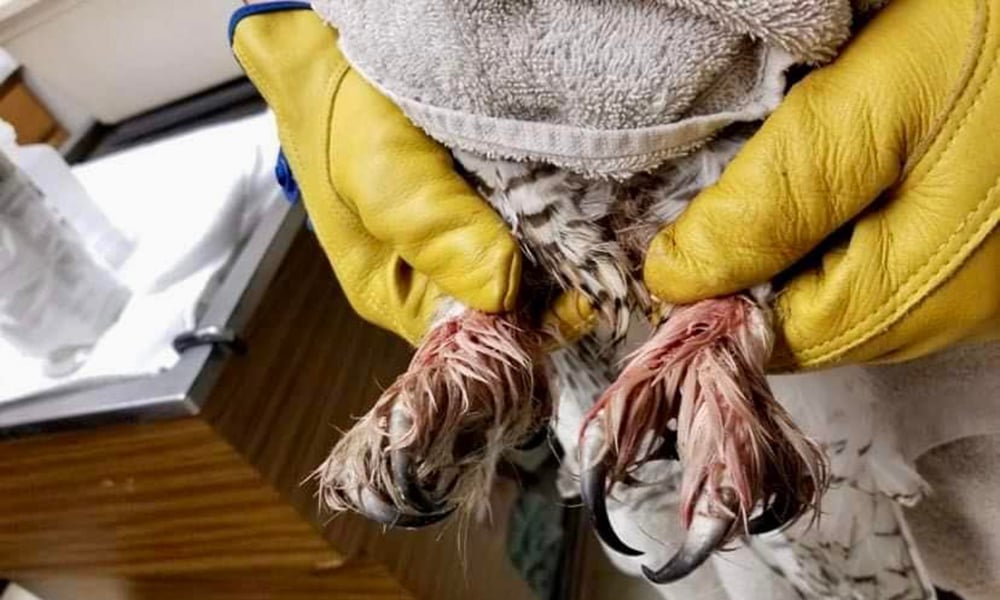 The owl had lost a lot of blood from a small wound on its foot.

All these factors point to secondary anticoagulant rodenticide poisoning, most likely from eating a poisoned mouse or rat. Willowbrook has treated several raptors this winter for such poisoning, including a bald eagle that was successfully released last month. 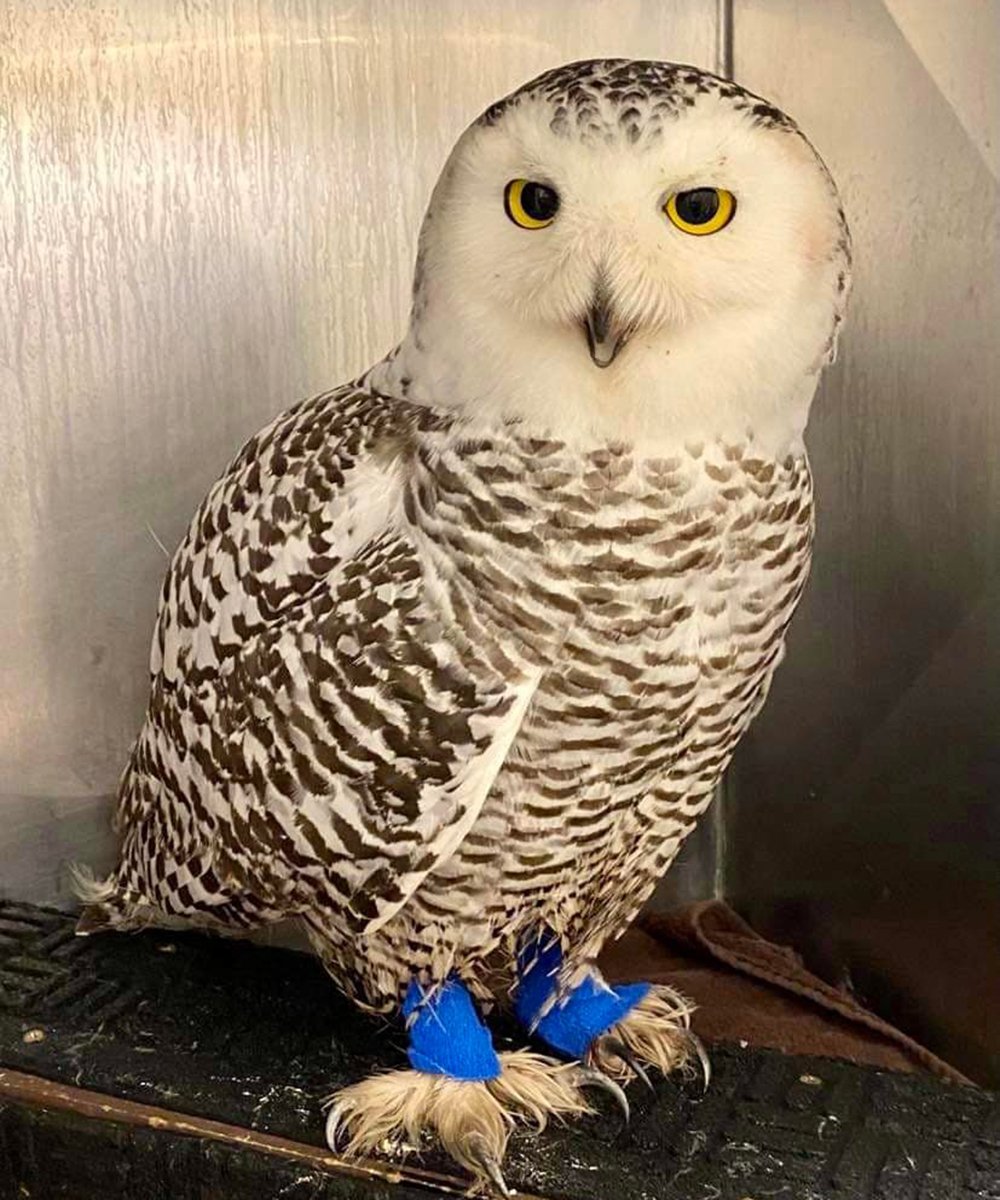 The poison inhibits an enzyme called vitamin K epoxide reductase, which recycles vitamin K in the body. Vitamin K helps blood clot, so if the body cannot recycle this vitamin, it eventually runs out. Once it runs out, animals can bleed to death from a small wound or superficial trauma. It takes about 3 days for the body to run out of vitamin K, so both target and non-target species don’t start showing signs of poisoning until days after ingestion. 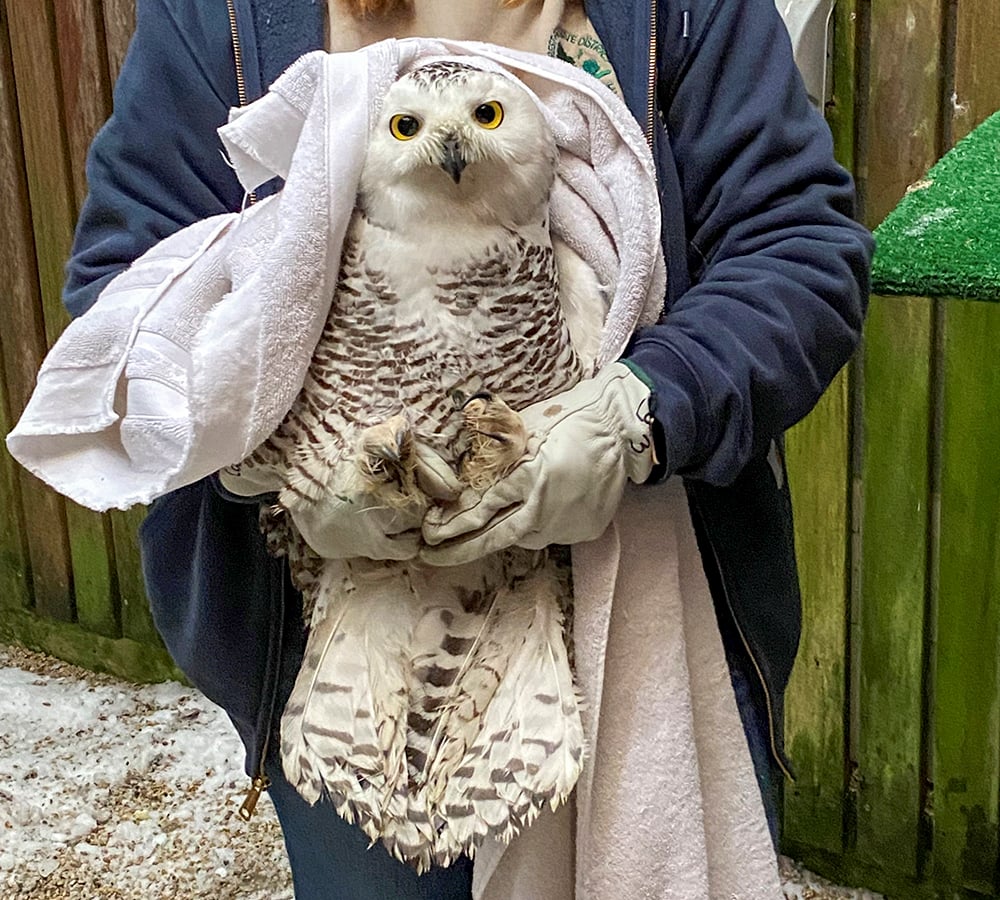 After the owl's condition improved a bit, it was moved to an enclosure in Willowbrook's outdoor raptor flight facility, where it continued to receive vitamin K therapy. This was taken Feb. 2, 2022.

Luckily, the owl did not require a blood transfusion, and made great strides in healing and was eating on her own after a short time with supportive care and vitamin K therapy. 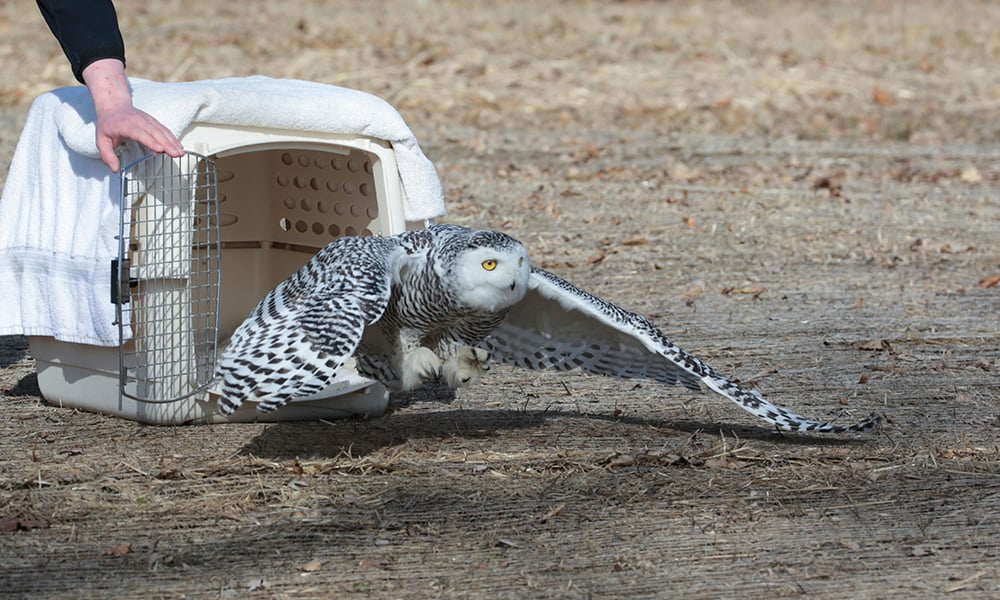 The snowy owl takes flight after being released March 14 at a DuPage forest preserve.

When dealing with unwanted rodents, the best defense is a good offense. Take steps to keep rodents away from your home by properly sealing openings and keeping human and pet foods in rodent-proof containers. If necessary, live traps, electric traps, or snap traps (indoors only) are preferred over poisons or glue traps because they don’t harm unintended targets.

Keeping our native raptor populations healthy and robust is the best, most natural form of rodent control. 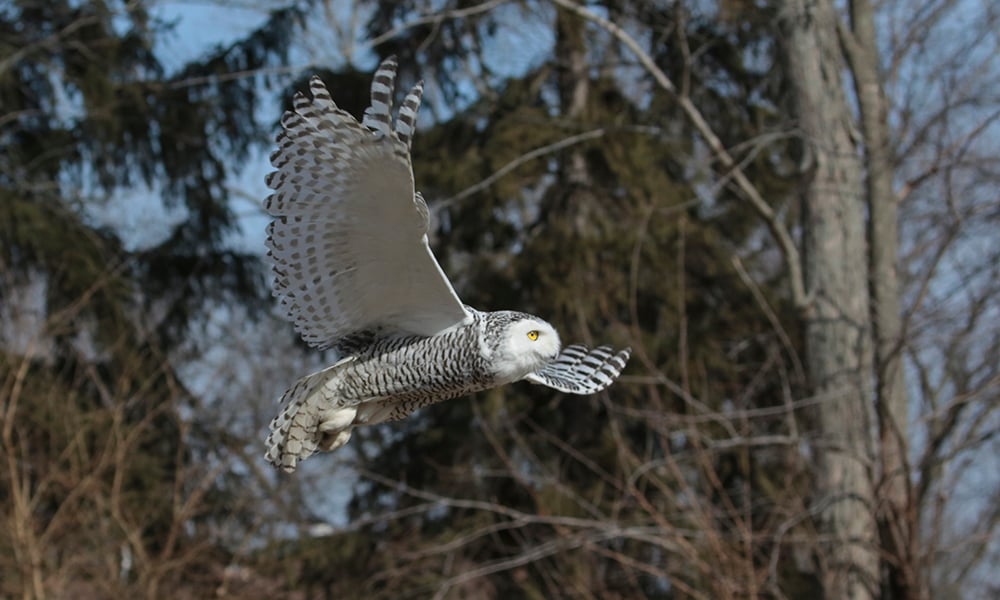 Snowy owls spend summers far north of the Arctic Circle hunting lemmings and other prey in 24-hour sunlight. In recent years, there have been numerous irruptions of snowy owls in the winter in the lower 48, including Illinois. An irruption is when a large population of a certain species migrates outside their normal range following a highly successful breeding period. 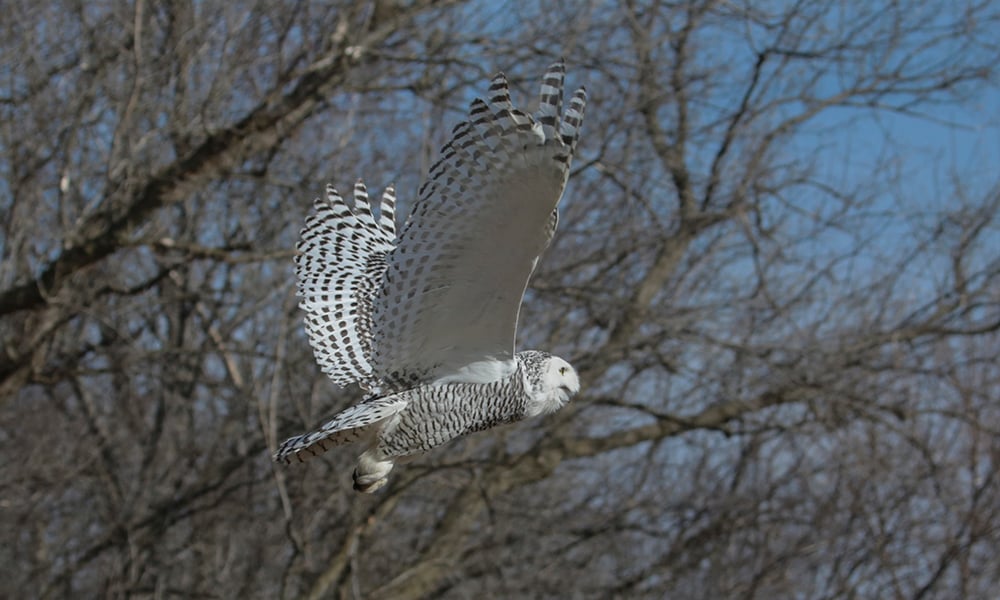 For snowy owls, this is linked to a boom in the lemming populations in the north, which is their favored prey. The difference in landscape between the tundra they are used to and more urban areas is quite extreme, causing some of these birds to end up in trouble — like vehicle collisions, entanglements, and in this case, eating poisoned prey. In big irruption years, snowy owls have been spotted as far south as Florida. 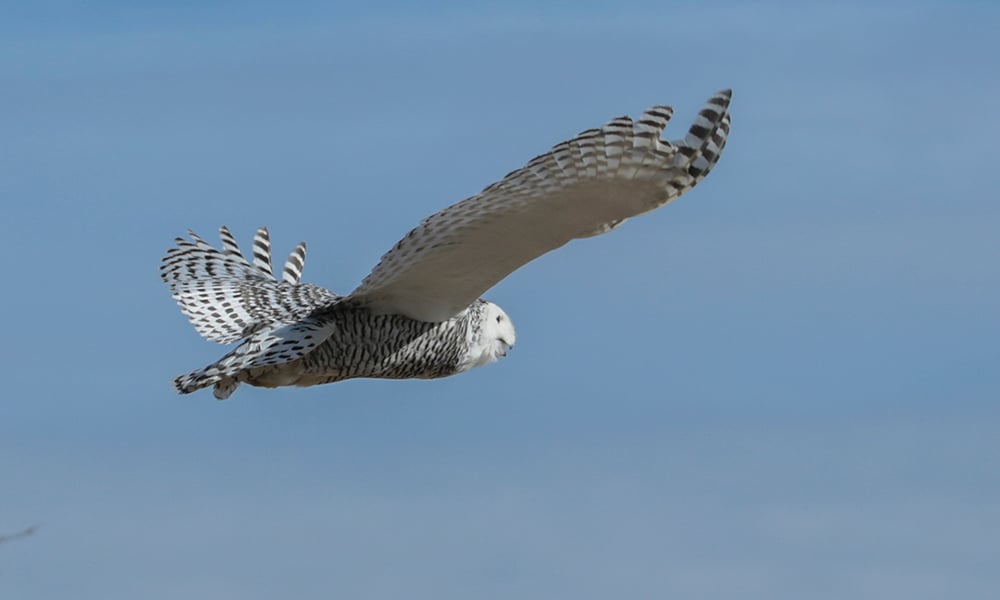 Snowy owls are built for the cold, with excellent camouflage and an incredibly thick layer of feathers. Owls already generally have feathery feet, but snowy owls have built in snow boots with heavy feathering down the legs and feet, even in between their toes. 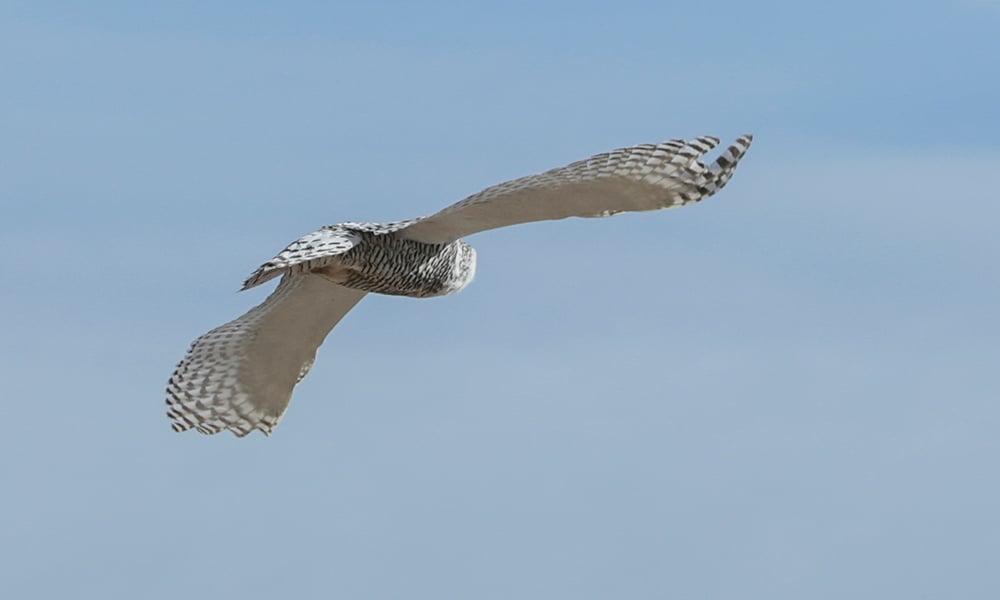 Snowy owls tend to be more active during the day and are often seen roosting on the ground or other flat open surfaces (sometimes rooftops) since that's normal for them — there aren't too many trees in the arctic. They also have feather tufts like the horned owls, but they are short and well-hidden on their thickly feathered, round heads.