As the Seasons Change: A Soil Opera

As the Seasons Change: A Soil Opera 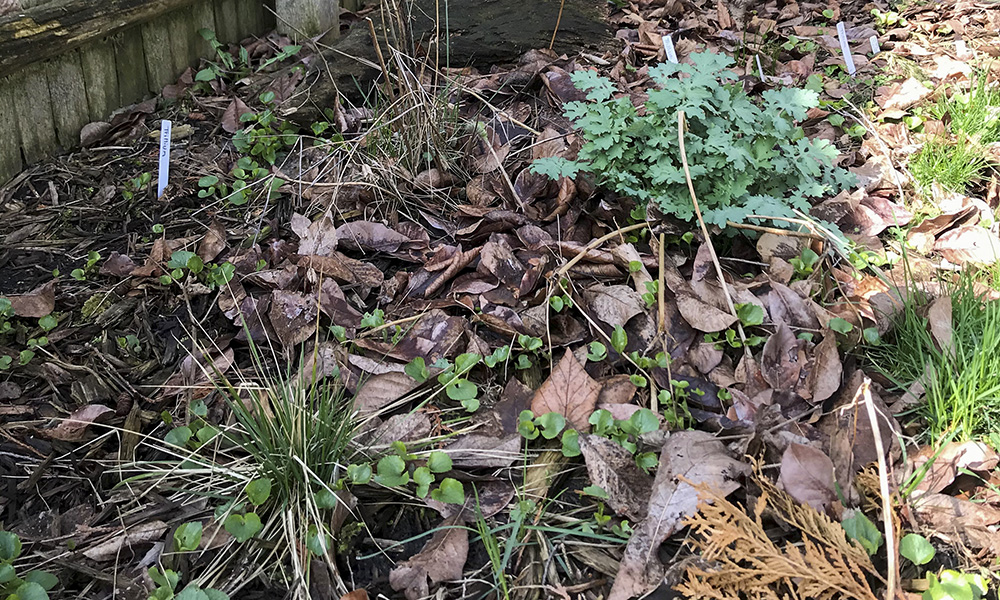 Soil. Mud. Dirt. Earth. That stuff on the ground that’s always been there and always looks pretty much the same. Not too much happening down there, right? Wrong.

Soil is an ever-changing place of purpose, the skin of the earth. Soil produces our food, fiber and paper, and throughout its formation, it produces fossil fuels. Soil makes up our forest preserves and serves as the foundation of our buildings and roadways. Soil brings life, and it cleans up death.

World Soil Day is Dec. 5, so it's a perfect time to explore the wonderful world of soil. 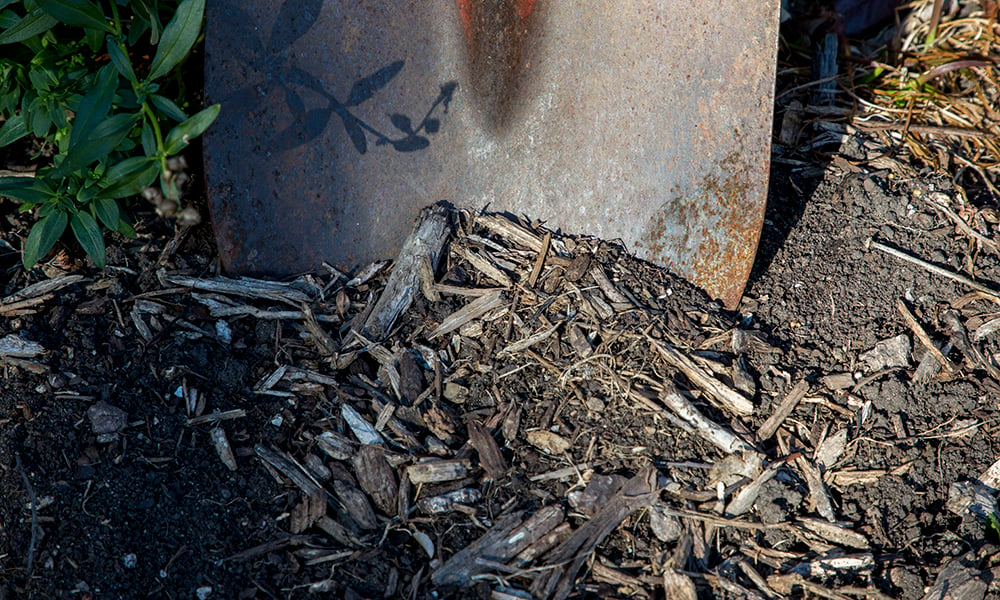 As interesting as soil is on its own (spare the eye rolls, please.) the descriptions of the decomposers, herbivores, omnivores and predators that live within it read like captivating science fiction. There are hunters and body snatchers. There are poison-clawed, thousand-legged beings, and there are green tigers and eight-eyed wolves. Sound scary? Maybe. But like life above ground, each creature that dwells in the soil and in the leaf litter that rests on top has its beneficial niche in the food chain.

The great decomposer, the earthworm, turns fallen plant matter into humus. Not to be confused with the dip made from mashed chickpeas, humus is some of the best naturally occurring compost around. In good soils, this rich organic material makes up the top layer and acts as fertilizer for new growth. The 80,000 or so earthworms that can inhabit 1 acre of land can create 10 tons of humus from organic matter in one year. 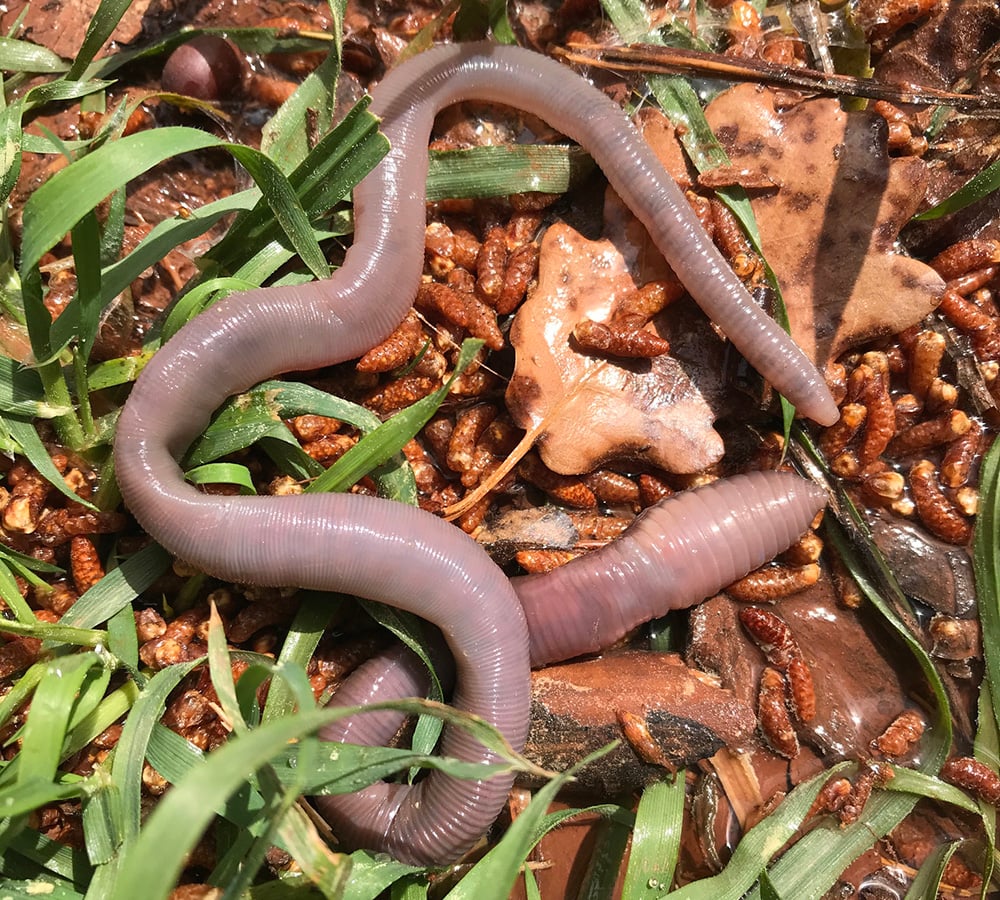 Earthworms are among the best decomposers for soil. Image by  oriolusoriolus/CC BY-NC 4.0

Snails and slugs, which are fellow decomposers but are actually relatives of octopi and squid, are the slime trailers. Some slugs have hidden shells under their backs, but most are shell-less snails, which allows them to squeeze into small openings and to stretch up to 20 times their normal lengths. The mucous residues snails and slugs secrete help their flat footlike bodies travel more smoothly and help them find their way home and signal their brethren to follow. By examining these slimy trails, you can tell what visited during the night. Snails leave continuous trails; slugs’ trails are broken. 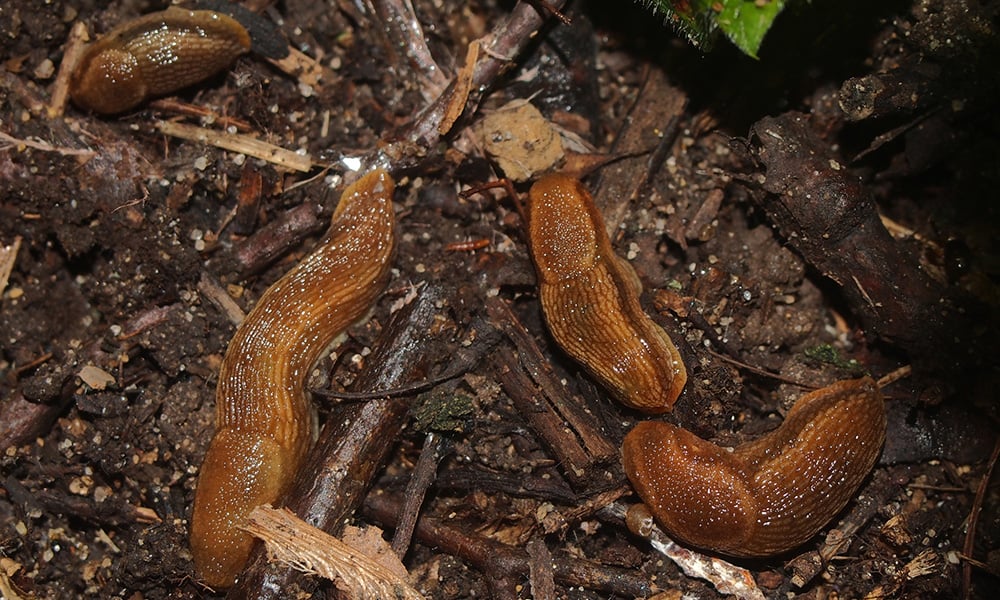 Millipedes also help break down decaying matter, but they can be hard to find because all of those short little legs make them terrific burrowers. (Despite their common name, millipedes do not have thousands of legs; common species have somewhere between 40 and 400.) They may appear daunting, but millipedes do not bite. To protect themselves from predators, they instead curl into tight balls or release a foul-smelling liquid, even into the hand of a person who picks one up.

Millipedes are also great at breaking down decaying matter in soil. Image by Leslie Graus/CC BY-NC 4.0

A more aggressive cousin of the millipede is the centipede. These predators have roughly 30 to 40 pairs of long legs and can move at a fast clip, which is useful when they’re hunting termites, silverfish or spiders. Centipedes are also armed with poisonous claws that inject venom into their prey, killing their victims quickly. If a centipede bites a person, though, it rarely hurts more than the sting from a bee. 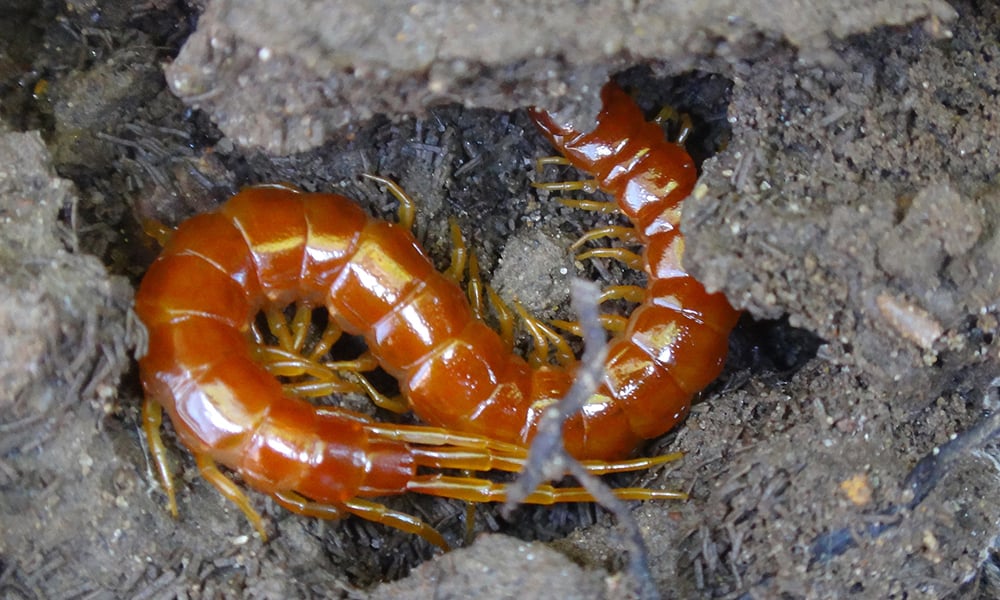 Centipedes are more aggressive than millipedes and like to hunt for termites, silverfish and spiders. Image by Chris Kratzer/CC BY-NC 4.0

Another familiar soil-dwelling creature is the pill bug, or roly-poly, although it’s not a bug at all. These omnivorous scavengers are crustaceans, which means they’re related more to lobsters and shrimps. In fact, they need to live in damp places to keep their gills wet in order to breathe. Their “roll up like a pill” style of defense protects their soft underbellies from enemies. 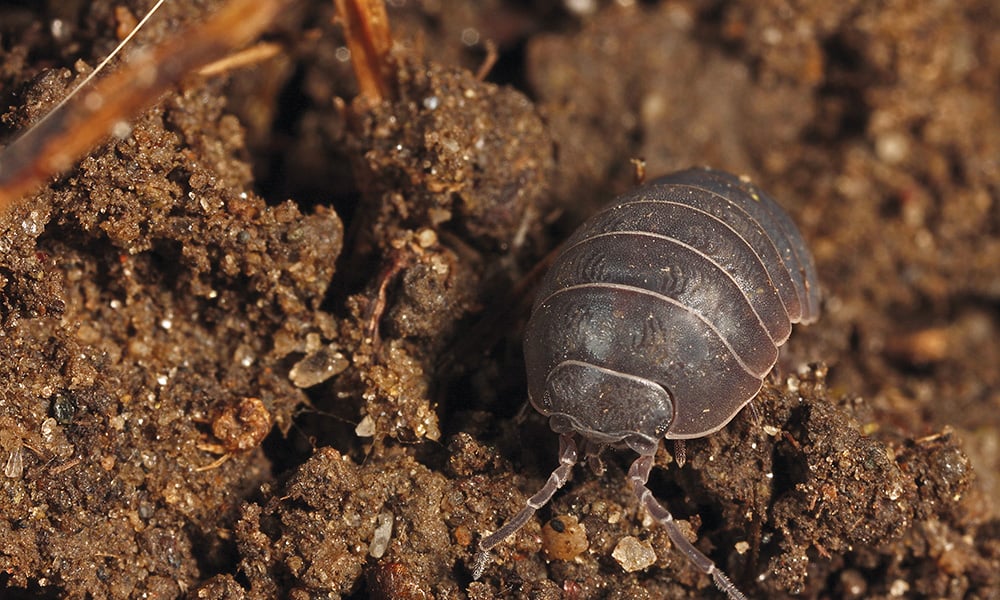 In the vein of “Invasion of the Body Snatchers,” the American carrion and American burying beetles do work many of us would rather not think about. Both lay their eggs on dead animals, and the resulting larvae feed off the carcasses, clearing flesh and other tissues down to the bone as they grow. As its name implies, the burying beetle goes one step further and stashes its carcass in the soil, sometimes dragging it up to 12 feet to find the right spot. This threatened species, which once inhabited Illinois, has a keen sense of smell; individuals will race each other to reach a rotting prize first. 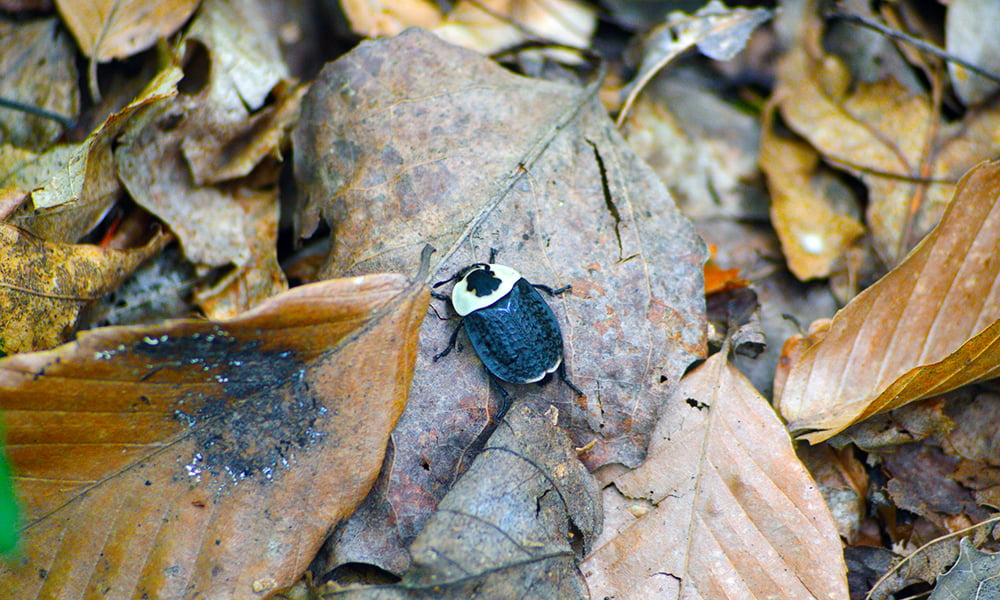 In keeping with their name, American carrion beetles feed on the carcasses of dead animals. Image by Simeon Rodgers/CC BY-NC 4.0

Another ground beetle, and perhaps the most well-armed, is the bombardier beetle, a southern Illinois species with a surprise for any attacker. When startled, it lifts its tail and sprays a hot, stinging mix of chemicals. As the sprayed animal (a hungry toad, for instance) tries to clear its eyes, the beetle takes off. Because it can twist and point its “hose” in any direction, a bombardier beetle would probably beat a skunk in any contest for accuracy. 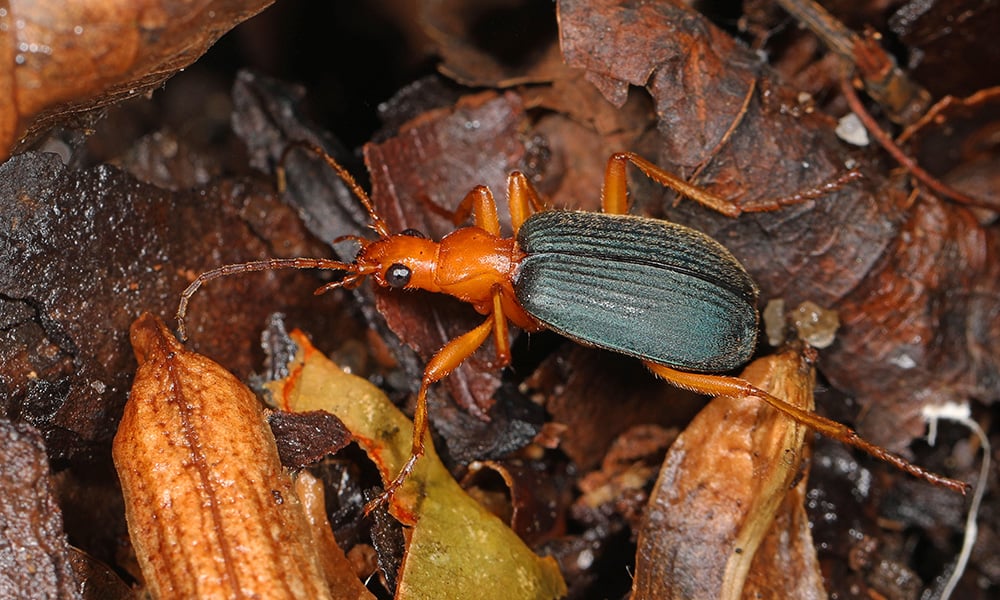 The bombardier beetle is well-armed with a surprise for any attacker. Image by Judy Gallagher/CC BY-NC-ND 2.0

Our last two featured soil dwellers are hunters that stalk through the leaf litter and get their names from land mammals. The fierce hunting style of the wolf spider earned this arachnid its name. It hides and waits and then leaps and grabs its prey with sharp fangs. And like the wild felines, the metallic green tiger beetle not only has stripes, albeit on it hard front wings, but also runs fast — up to 5 mph — and takes down prey much larger than itself. Tiger beetles also spit digestive juices onto their victims, turning them to mush and making them easier for them to consume. 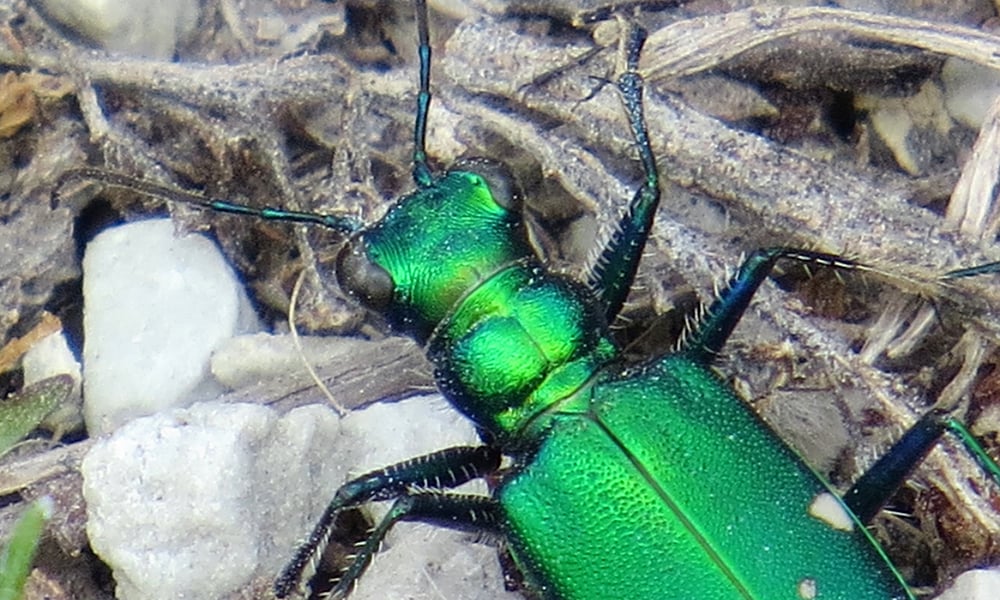 So as you’re enjoying the beautiful scenery above ground, don’t forget the party that’s going on below. A world as diverse and fascinating as what we see above ground is underfoot. Just remember to tread lightly. 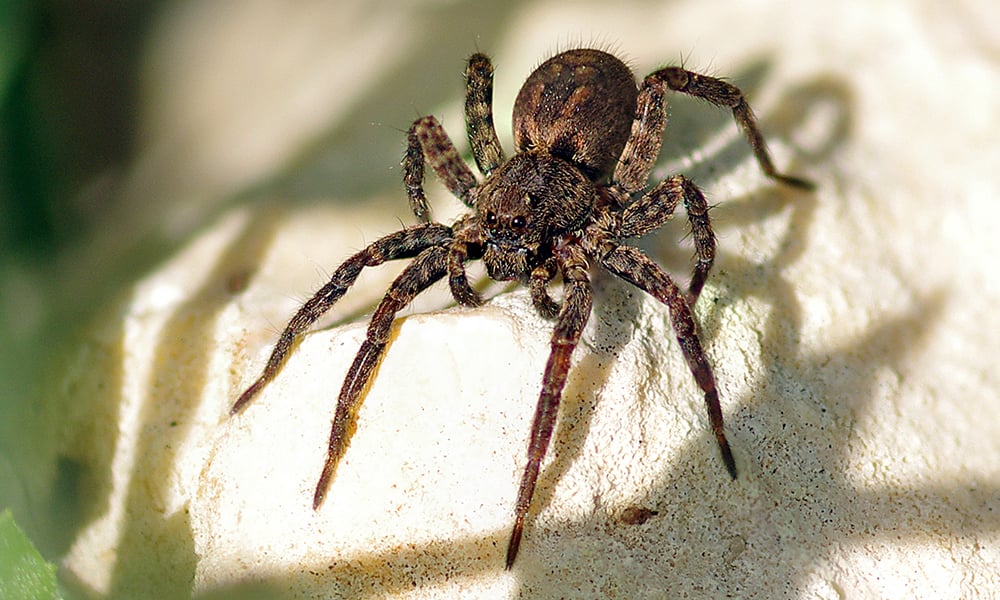