Spiders, harvestmen, mites, ticks and other arachnids are members of the class Arachnida. All adult arachnids have eight legs and two body sections: a cephalothorax and an abdomen.

Spiders have narrow “pedicles,” which join the two sections of their bodies (and look somewhat like “waists.”) They have fangs, which they use to inject venom into their prey (venom that is rarely dangerous to humans) and feed almost exclusively on insects and other spiders. Most have four pairs of eyes, and all have “spinnerets,” organs that produce silky threads, which they use to make webs or cocoons.

Harvestmen, or “daddy longlegs,” look like spiders, but there are several differences. A harvestman’s cephalothorax and abdomen are fused, which makes the animal’s body look like a single oval. Harvestmen do not produce venom or silk, and most have one pair of eyes. The majority eat plants and small insects.

Mites and ticks, which belong to the same subclass of arachnids, have four-stage life cycles — egg, larva, nymph and adult — and fused body sections. Most mites are microscopic, and many are parasitic, feeding on plants and animals. Mites rarely transmit diseases to humans, but some, such as dust mites and chiggers, can affect human health. Ticks, on the other hand, feed solely on the blood of other animals and can transmit disease.

Ticks live throughout DuPage County in parks, prairies, woodlands and other natural areas and are often associated with transmitting diseases. The black-legged tick, also known as the “deer" tick, is the species that can transmit Lyme disease to humans. To a lesser degree, this tick species is also able to transmit other diseases in our area like anaplasmosis, which was found in an infected tick in 2013. Now that these diseases have been identified in DuPage, people should learn to properly identify ticks, understand their habits and learn how to protect themselves from these arachnids.

The most common ticks in DuPage are the American dog tick, which is sometimes referred to as the wood tick; the lone star tick; and the black-legged “deer” tick. American dog and lone star ticks are fairly abundant from the middle of April through August. Deer tick populations, however, rise in mid-April, subside in mid-June when temperatures begin to rise, and increase again in late September through the beginning of November. 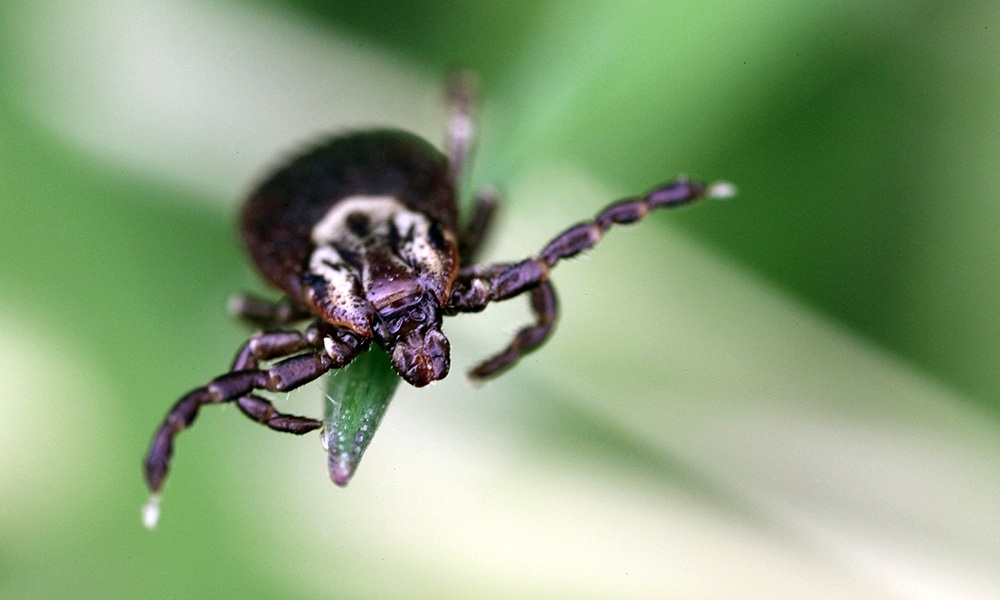 To advance from one stage of life to the next, a tick needs to take a blood meal, preferably from a rodent, bird, deer or dog but occasionally from a horse or human. As a result, ticks are attracted to carbon dioxide, a gas all animals exhale. Like mosquitoes, ticks congregate where they find mammals, carbon dioxide and ideal breeding habitats, such as along footpaths and deer trails.

A good example of the tick’s complex life cycle is that of the black-legged tick, which occurs over two years. In order to produce eggs, the female adult takes a blood meal, usually in the fall, and produces and lays her eggs — up to 3,000 — in the spring. The eggs quickly hatch into larvae, which take their first blood meals from late spring to early summer. They then molt into nymphs and become dormant until the following spring. With one more blood meal in the late spring, the ticks molt again through the summer to become an adult in the fall. As adults, males will not take blood meals. Adult females, however, must take one last blood meal to develop eggs after mating. The eggs will disperse, and the process begins over again.

Ticks usually hang out on grasses or forbs 2 inches to 3 feet above the ground, where they can hook onto hosts for blood meals, but people can easily avoid most tick encounters.

Ticks are known to transmit diseases such as Rocky Mountain spotted fever, tularemia, ehrlichiosis and Lyme disease to humans and pets.

Lyme disease was detected in ticks in DuPage County for the first time in 2005. Infected deer ticks are most likely to transmit Lyme disease during the nymph stage. Like the other conditions, it is quite rare in humans and can be treated successfully with antibiotics if caught early. Early stages of Lyme disease include its signature bull’s-eye rash, headache and fever.