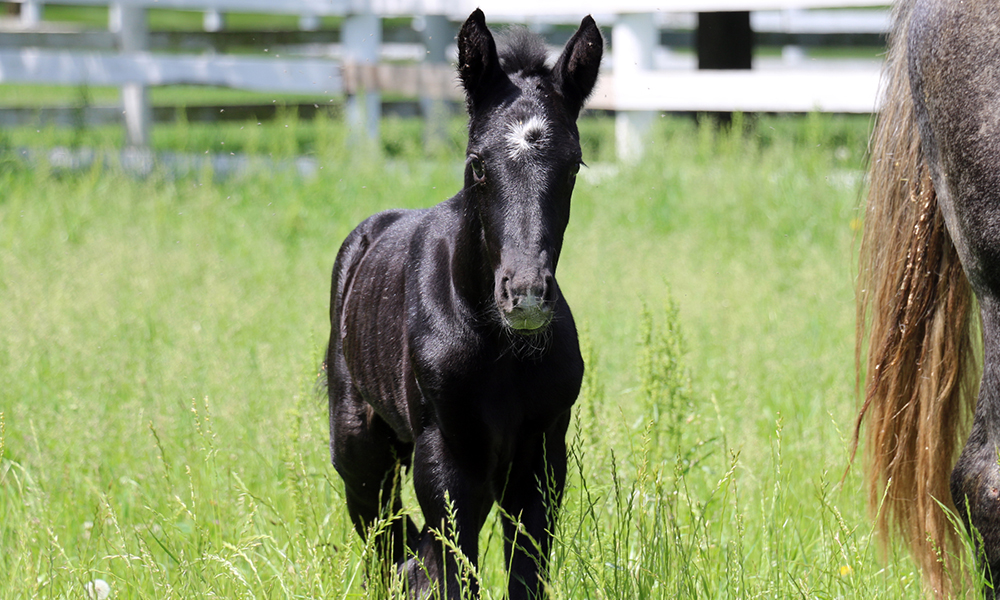 Danada Equestrian Center welcomed a foal on Monday, May 25 at 5:45 a.m.

The colt is bonding with its mother Daisy, a Percheron-quarter horse, who joined the center as a new addition in late February. The mare (age 6) and her partner Babe (age 5) were purchased through a gift by volunteer Jan Yong and her husband Jack to the Friends of the Forest Preserve District of DuPage County, a 501(c)(3) nonprofit.

Mr. and Mrs. Yong have named the colt Duke. “Duke and Thunder were the names I suggested,” says Jan, “And we settled on Duke, which was my first choice.” 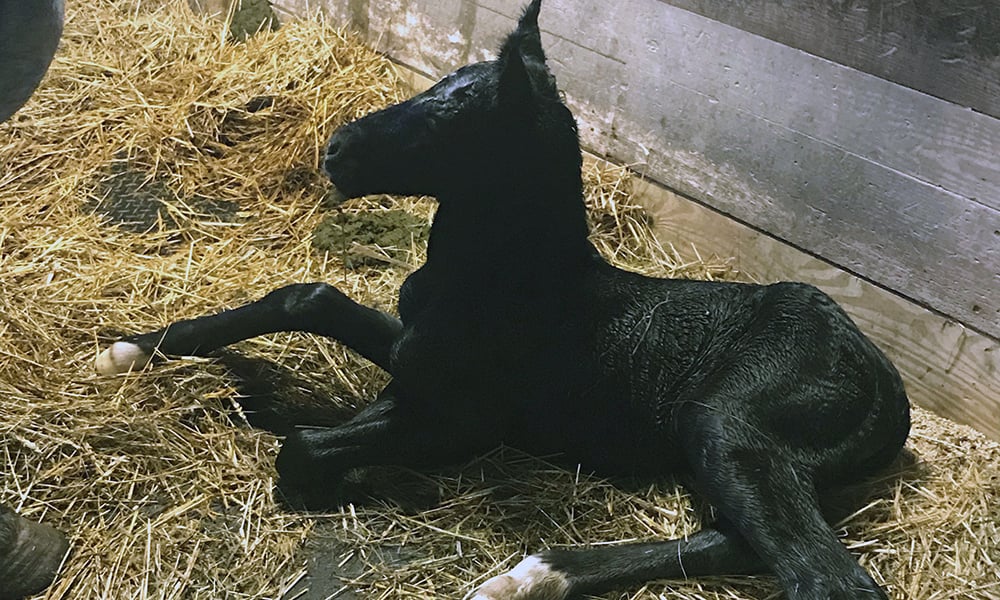 While the Forest Preserve District of DuPage County’s education centers have remained closed to visitors during the COVID-19 pandemic, the staff at Danada continued to care for the horses and expectant mare Daisy. As her delivery date drew near, the mother-to-be was moved to a private stall, and staff watched her behavior and prepared for foaling. The stall was also outfitted with a camera for monitoring her health and conditions round-the-clock.

Equestrian Education Manager Wayne Zaininger was awakened during the early morning hours to see Daisy in the birthing position, which looked somewhat like stretching. When delivering, a mare will typically lay down on her side with her legs extended to aid in her strong contractions and expulsion of the baby. The mare gave birth within 15 minutes, and she and her foal appeared generally healthy. 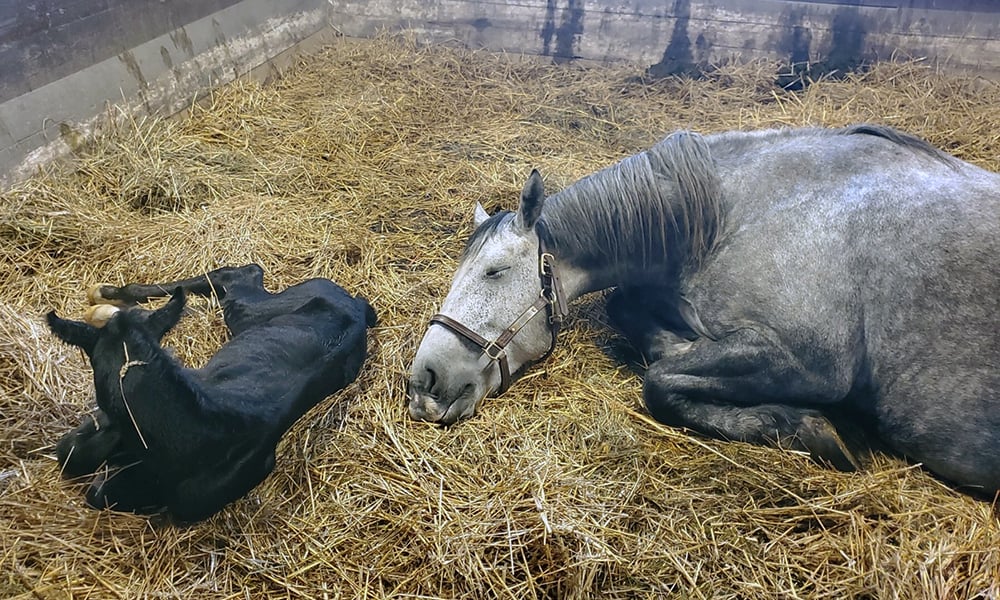 The foal lifted his neck, rolled onto his chest, grew his strength for a short bit and eventually positioned his forelegs under him. In time he stands, rising from the strength of his rear legs and wobbling a bit before steadying himself on his feet. He took his first drink of Daisy’s milk, which provided colostrum containing growth-enriching nutrients and antibodies to prevent infection from disease, and passed the first feces. 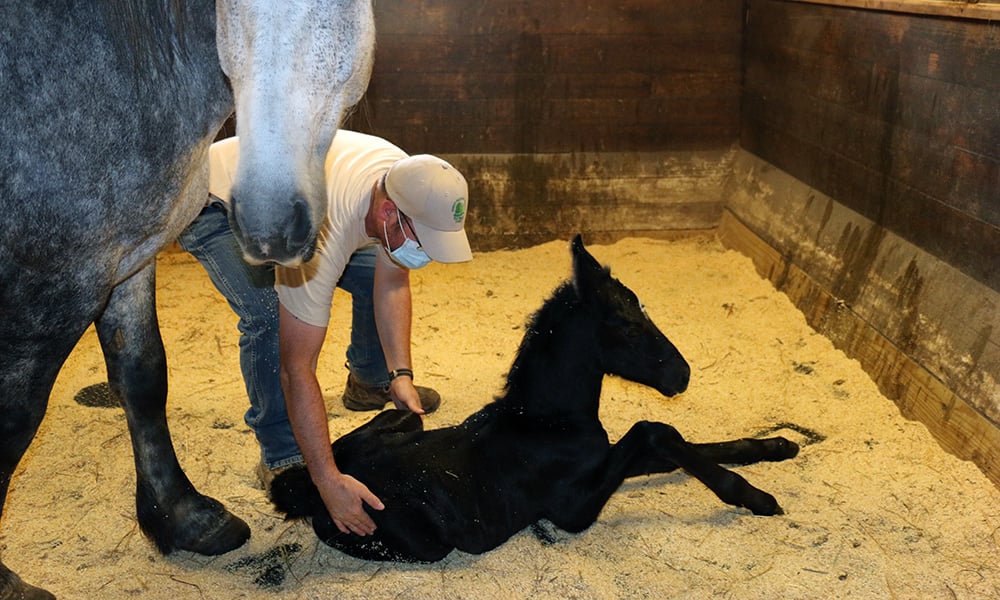 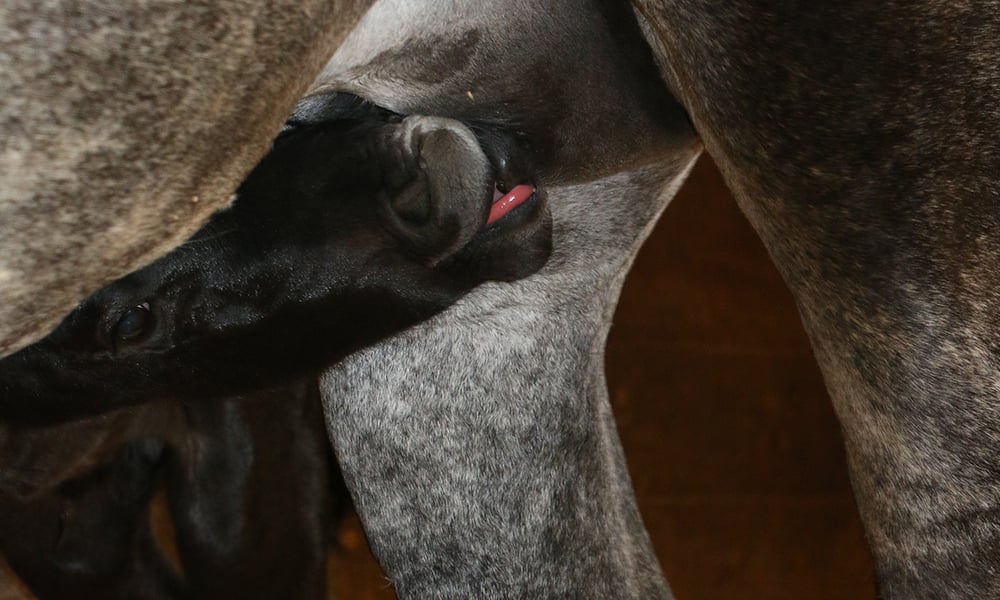 The center’s veterinarian confirmed the two were healthy during a visit for the post-foaling exam. At three days old, the colt weighed 122 pounds and stood 42.5 inches tall at his withers. He is jet black with a white star, snip and three socks.

The colt is currently bonding with his mother and learning all about his new surroundings. The two share a stall in the Kentucky-style barn and enjoy some turnout in a grassy pasture. 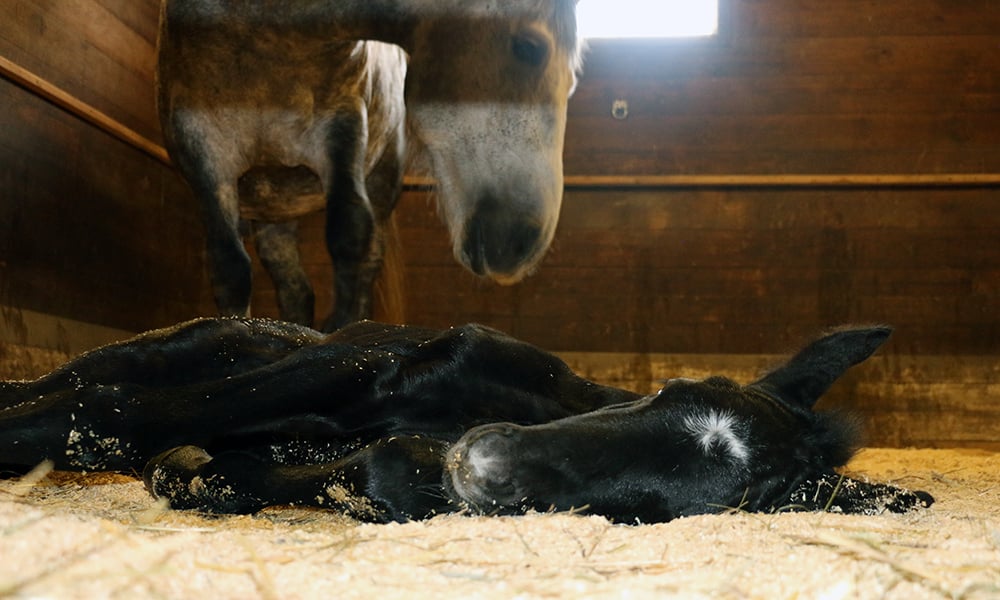 Daisy remains watchful of her colt and is a good but protective mother, both in the stall and out.

Duke is a curious and spunky colt. He mostly remains near Daisy for protection but will also venture a bit from her side to visit with his caretakers, which is also a good sign that he has taken to humans and imprinted successfully.

“When turned out to pasture, he usually gets a burst of energy and rips around for the first 10 minutes,” says Equestrian Program Coordinator Michelle Dobosz. “Then he’ll choose a spot to lay, just drops and takes a nap in the summer sunshine.” 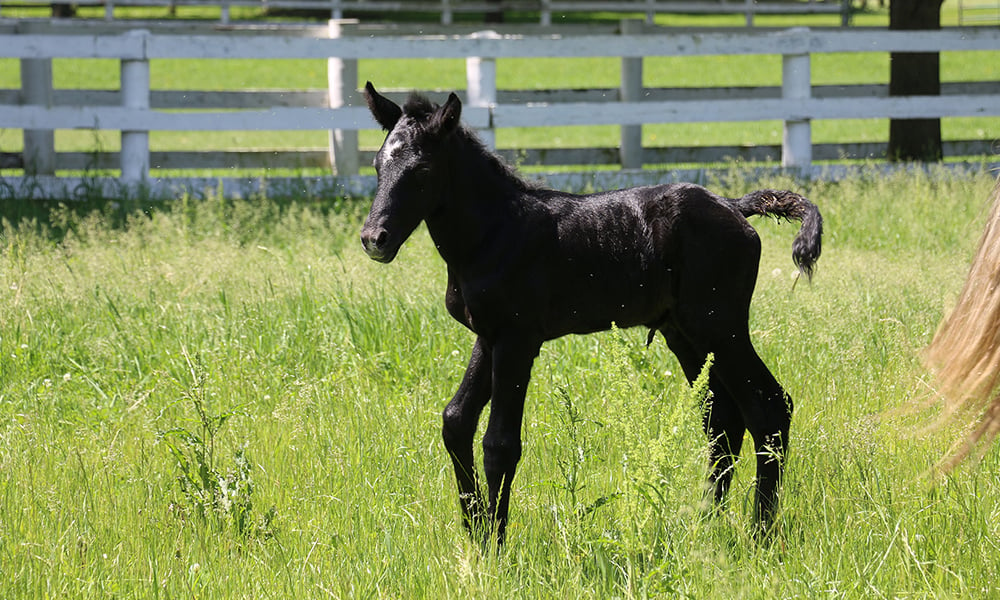 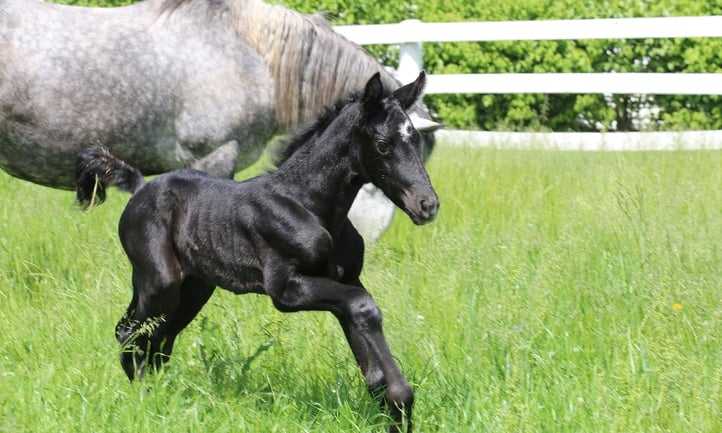 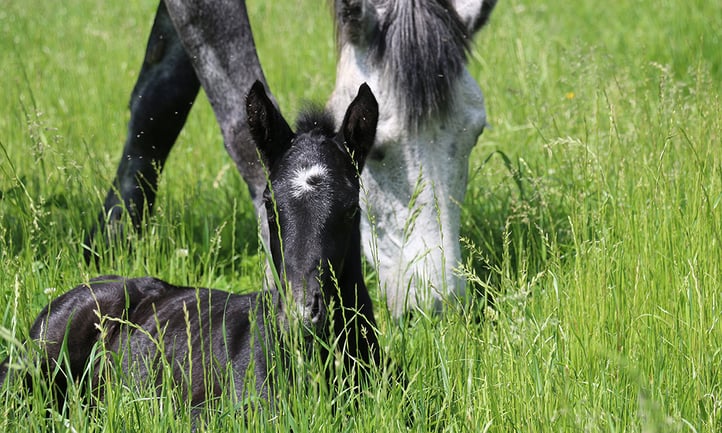 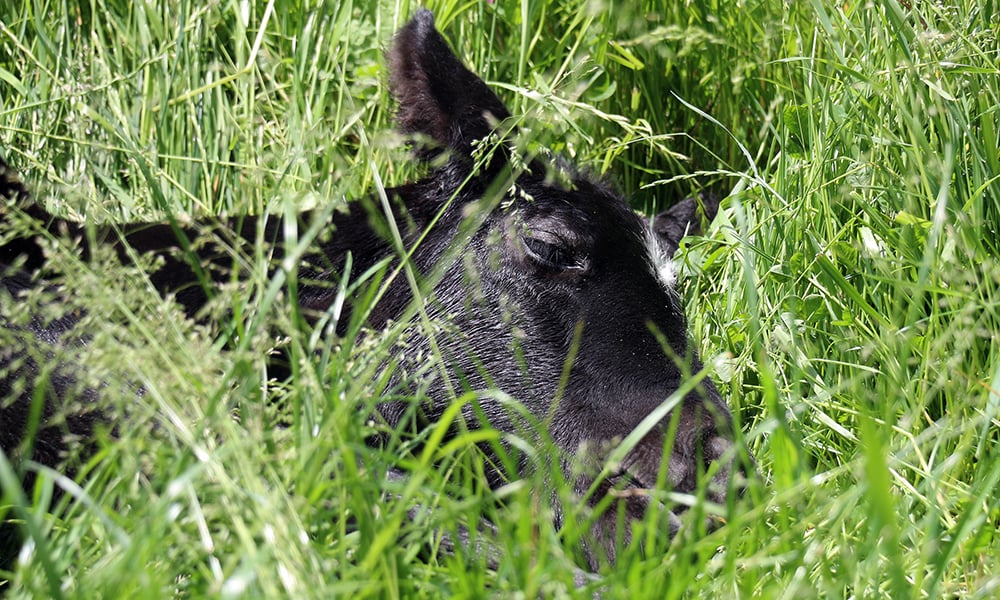 Michelle and another equestrian program coordinator Brad Doweidt work with the mare and her colt daily. “Today I worked with Duke on haltering and light leading,” says Brad of the one-week-old colt. “The first time I lead him around was about 2 minutes in his stall. Then about 30 minutes later, I took him out to the grass paddock not only with his “harness” and “butt rope” but also with a halter to steer him. He did really well, did not rush like he has at other times, and was much calmer leading him to and from the paddock." 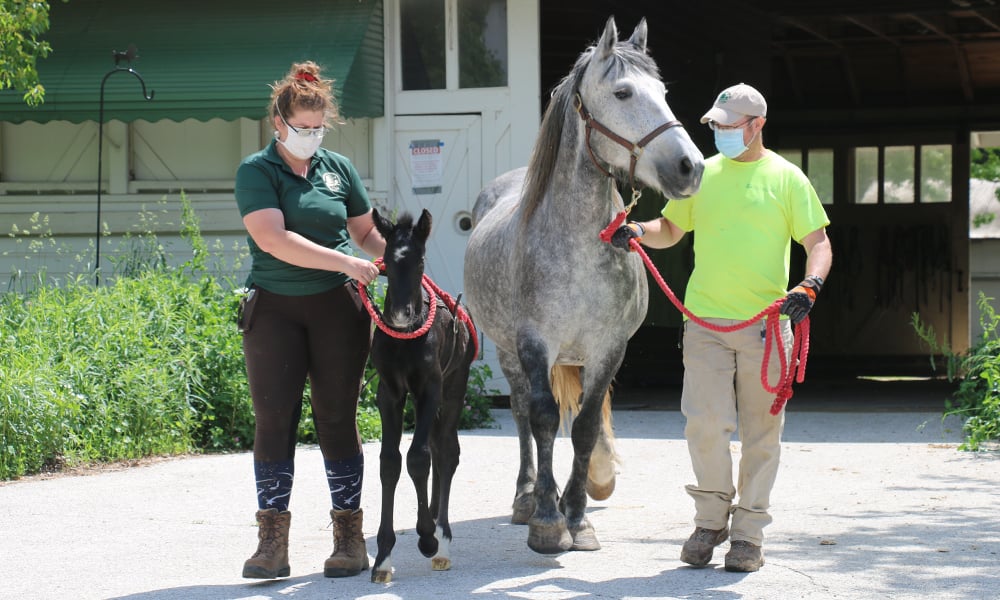 "He’s just learning how to use his legs and ran lap after lap in the paddock, this time only laying down for about 5 minutes. He enjoys running and is very proud of himself!” he continued. 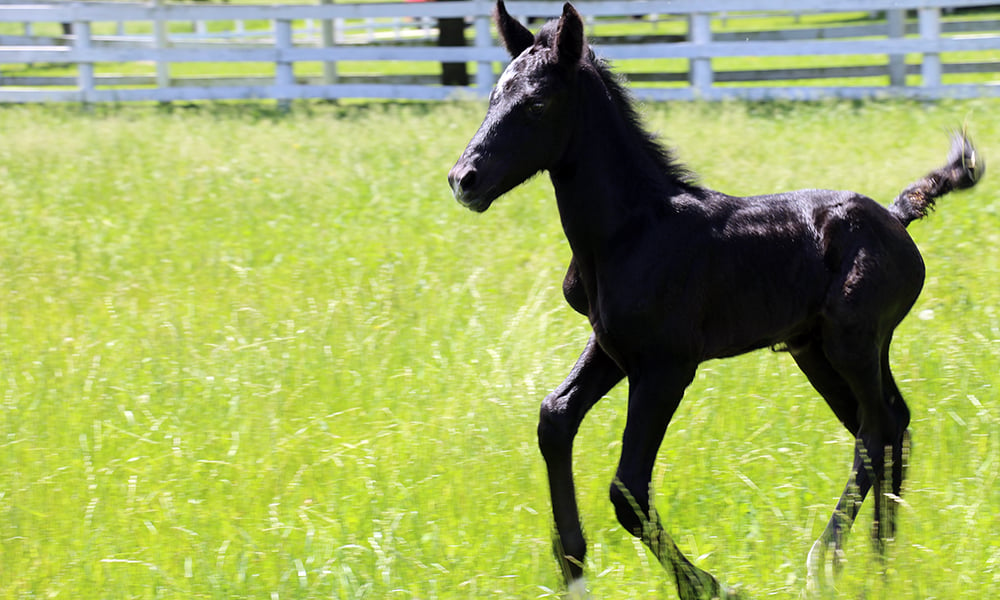 Every day is a new experience for the colt. “We also had a bit of rain today, and on a cute note, he enjoyed being tickled by the drizzle,” Brad says. 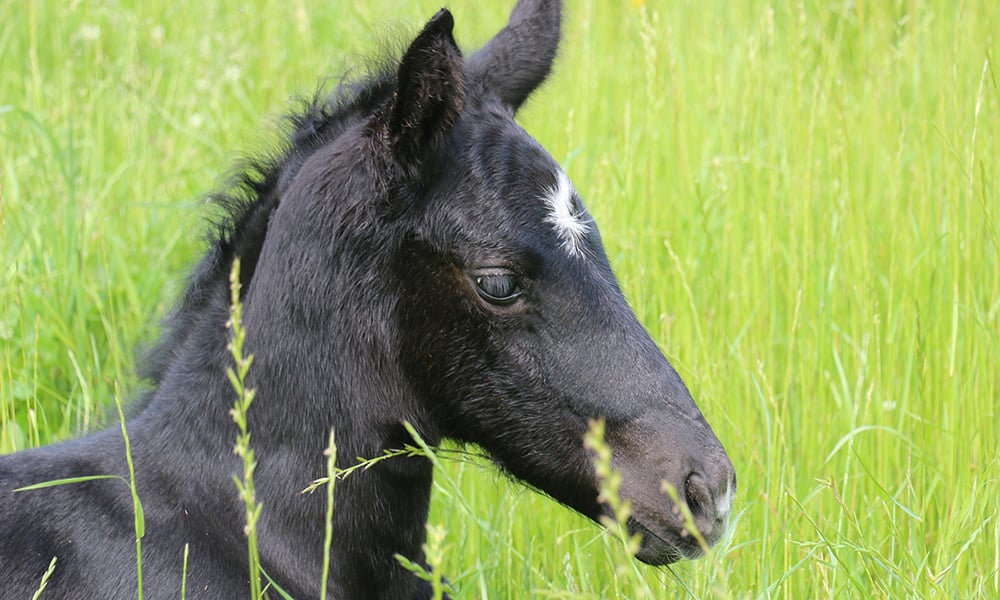 As he grows older, Duke will begin to mimic Daisy’s behavior. He’ll also become more independent and venture even further from his mother to discover more about the barn, the pasture and even other horses. He’ll likely try his first taste of grass during his first week of age and grain at about six weeks . Daisy will naturally wean her colt in about six months to one year.

The colt is the second foal for Daisy. Duke’s sire is a Standardbred.

Danada Equestrian Center welcomed Daisy and Babe in late February this year. The two mares are being trained not only for the center’s lesson program but also for its horse-drawn wagon rides.

Don't miss the latest news from the Friends’ team! Sign up for the Development News e-newsletter sent directly to your inbox to receive regular updates and exclusive offerings.