A Blog Story About Supporting Nature in Our DuPage Forest Preserves

Corporate-matching programs are attractive to many Friends of the Forest Preserve District donors and others who contribute to nonprofit foundations. T

hese corporate programs allow employees not only to make a gift to a cause in which they believe but also to maximize the impact of their philanthropy.

For many private and public companies, a corporate-matching program matches an employee’s donation either in whole or in part of a total gift made to a nonprofit. Such is the case with long-time wildlife advocate and conservation enthusiast Annette Thompson from Aurora.

For many years Thompson has supported the state-endangered Blanding’s turtle and championed the Forest Preserve District’s species-recovery program, which is celebrating its 25th anniversary. 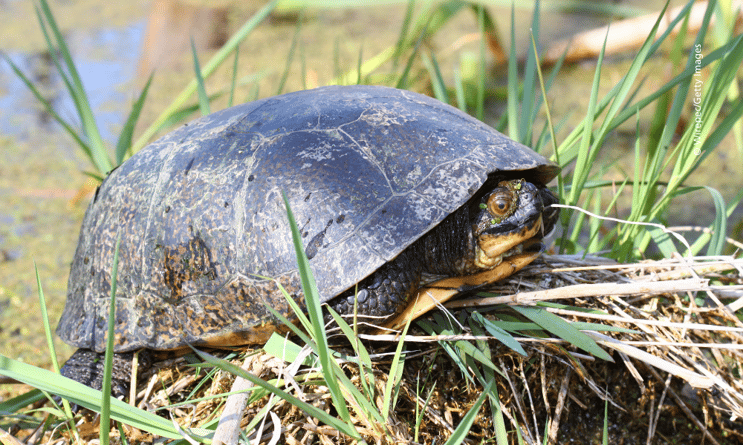 Upon learning the Blanding’s turtle was a state-endangered species, Thompson believed she had to do her part to support the hyper-local population. “Adopting a Blanding’s turtle through the Friends of the Forest Preserve District is an easy way for me to feel like I am helping to keep this species alive not only in DuPage but also in the state,” she said. “I’m not sure many people know there are endangered species in their community and that they can do something to help these creatures.” 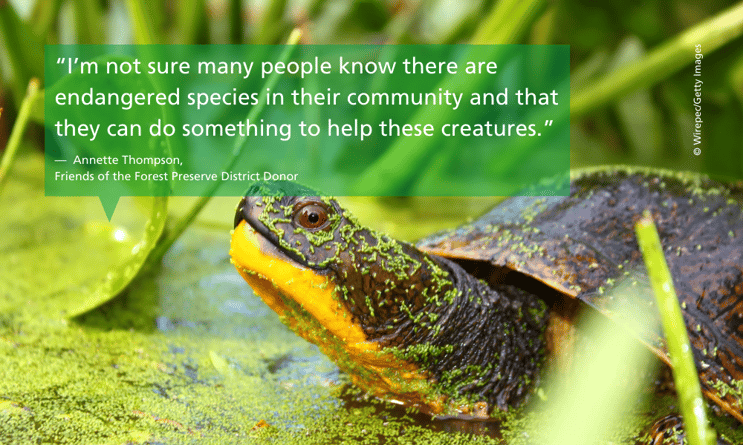 The Blanding’s turtle is a medium-sized, semiaquatic freshwater turtle known for its yellow chin, throat and speckled shell. Populations have been declining due to low hatchling success rates and shortened life spans, due in part to a loss of habitat. The state listed the Blanding’s turtle “endangered” in 2009.

The Blanding’s turtle head-start program is a longtime, regional effort led by the Forest Preserve District. Through this program, the Forest Preserve District and its partners — including Kane, Lake and Will county forest preserve districts, Brookfield Zoo, Peggy Notebaert Nature Center and Shedd Aquarium, to name a few — have worked to revitalize the Blanding’s turtle population and restore the habitats where they live in northeastern Illinois.

Each spring, ecologists track and trap Blanding’s turtle females carrying eggs in the field. The gravid females are induced in captivity and go into labor in special birthing pens at Willowbrook Wildlife Center. The eggs are collected from the pens and placed in incubators, where temperatures are controlled to produce a greater ratio of females-to-males to enhance the population in future years. The females are then returned to the wild.

Hatchlings are transferred to one of our partner organizations, where they will be raised over the course of one year. The hatchlings grow in a captive setting — void of predation and other hardships that would otherwise threaten their success in the wild. 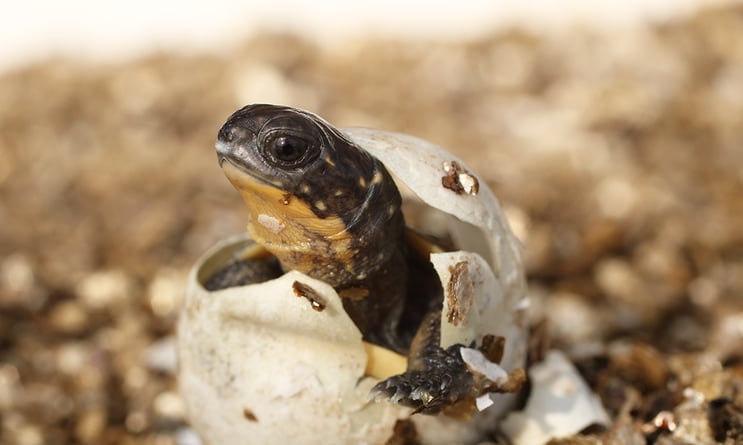 The juvenile turtles are released at a DuPage forest preserve after their first year at a substantially larger size.

“I feel fortunate the Friends of the Forest Preserve District makes this program available to its community to support an endangered species," Thompson said. "Not only that, but my employer offers matching funds to the nonprofit organizations I support. That makes my donation doubly impactful!”

Thompson and her employer’s donations have grown since the program's first offering in 2017. Combined, the two have supported rearing 33 hatchlings in addition to managing the habitat where these species thrive.

“If we don't care for our threatened or endangered species, what happens to our ecosystem?” she asked. 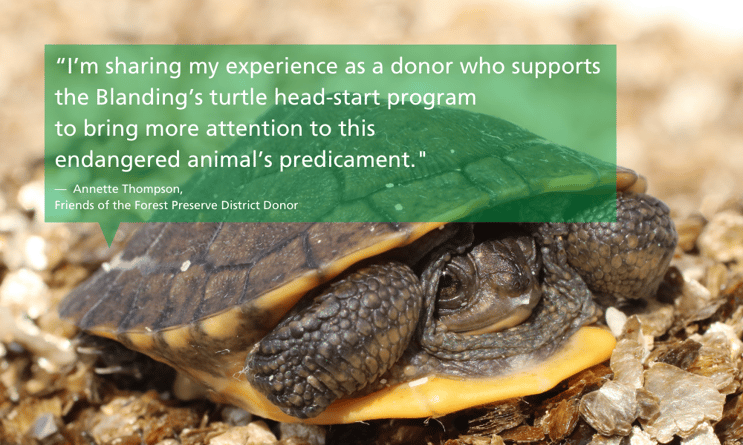 “I’m sharing my experience as a donor who supports the Blanding’s turtle head-start program to bring more attention to this endangered animal’s predicament," she said.

"I'm asking others to support the Forest Preserve District, too, because giving back to your community makes it strong and vibrant,” she continued.

Thompson found the opportunity to adopt a hatchling makes a great gift for that “hard to buy for individual," especially during the holiday season. “I named the first two turtles I adopted Pebbles and Bam Bam, after my favorite cartoon and its characters as a kid,” Thompson said. “To select and name a turtle could be a fun life-event for some, especially if it's a child.”

Each unique hatchling adoption is symbolic. The hatchling never goes home with its adopter but can be given a name all its own.

Each adoption comes with a certificate featuring your very own hatchling’s photo, a plush stuffed animal and an annual status update (if the turtle is captured after its release in subsequent years). The adopter can also join our program’s lead ecologist for a behind-the-scenes look at the rearing process and a meet-and-greet with the newborns!

These days, Thompson looks a bit differently upon an occasional moment she gets to sit near a body water at a forest preserve. “Knowing the Blanding’s turtle may potentially be in these waters and may be struggling," she said, "certainly paints a different picture for me.” 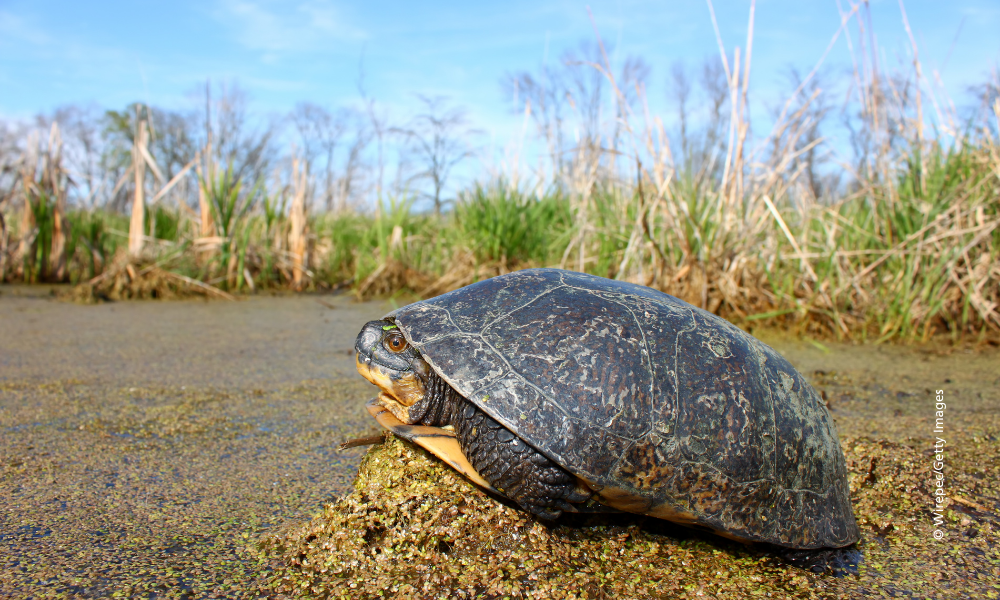 “In DuPage County, many wild animals’ habitats have been reduced or fragmented for strip malls, housing developments, business parks and more. We need to be better stewards for those creatures who need our help and do all we can to support their existence" she continued. "Because if we do not take action, more animals will end up on the endangered-species list. And I do not want to see that list get any longer!” she exclaimed.

If you would like to adopt a Blanding’s turtle of your own, visit dupageforest.org/adopt-a-turtle. You can also contact us about contributing through your employer’s matching-gift program at fundraising@dupageforest.org or 630-871-6400.

A gift to the Friends of the Forest Preserve District of DuPage County is tax-deductible under section 501(c)(3) of the Internal Revenue Code.