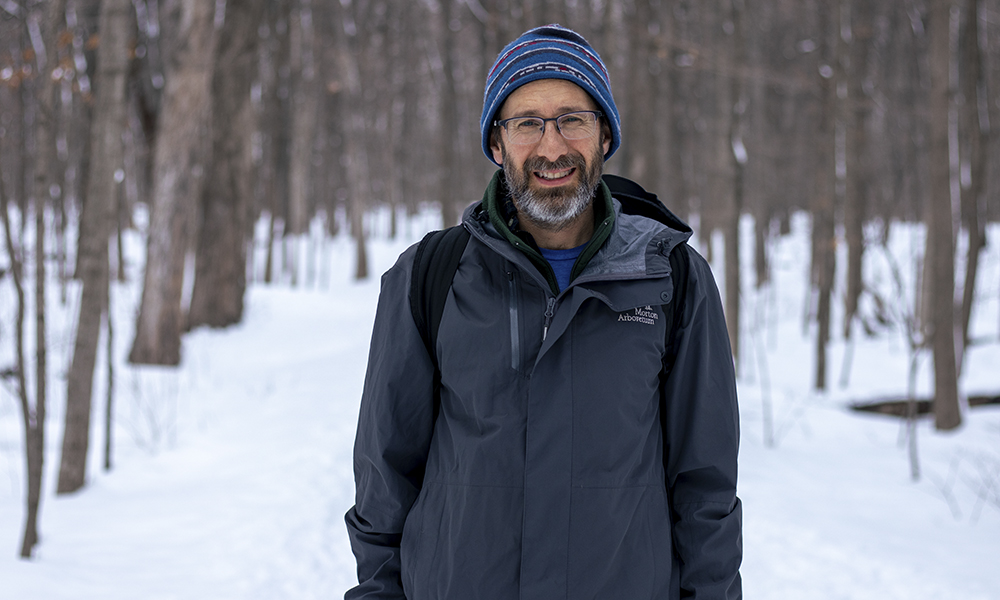 Andrew Hipp enjoys being outside, canoeing, biking and exploring.

When he’s not working as a plant systematist and herbarium director at The Morton Arboretum in Lisle, he can often be found exploring the flora at Maple Grove Forest Preserve in Downers Grove, and sharing his observations and findings in his natural history blog, A Botanist’s Field Notes, and on Twitter.

He's even written an essay in Place Journal about Maple Grove, called "Taking a Forest's Measure: A Suburban Forest Preserve from the Eocene to the Pandemic."

Hipp started working as a naturalist in Madison, Wisconsin in 1993, and earned his PhD in plant systematics at UW-Madison in 2004. He’s been working at The Morton Arboretum since September 2004. He enjoys listening to music, reading and writing, traveling, and being with his family.

Hipp is married to independent artist Rachel Davis, with whom he has collaborated on several natural history essays and a field guide to Wisconsin sedges. Hipp and Davis have two sons and live in Downers Grove. 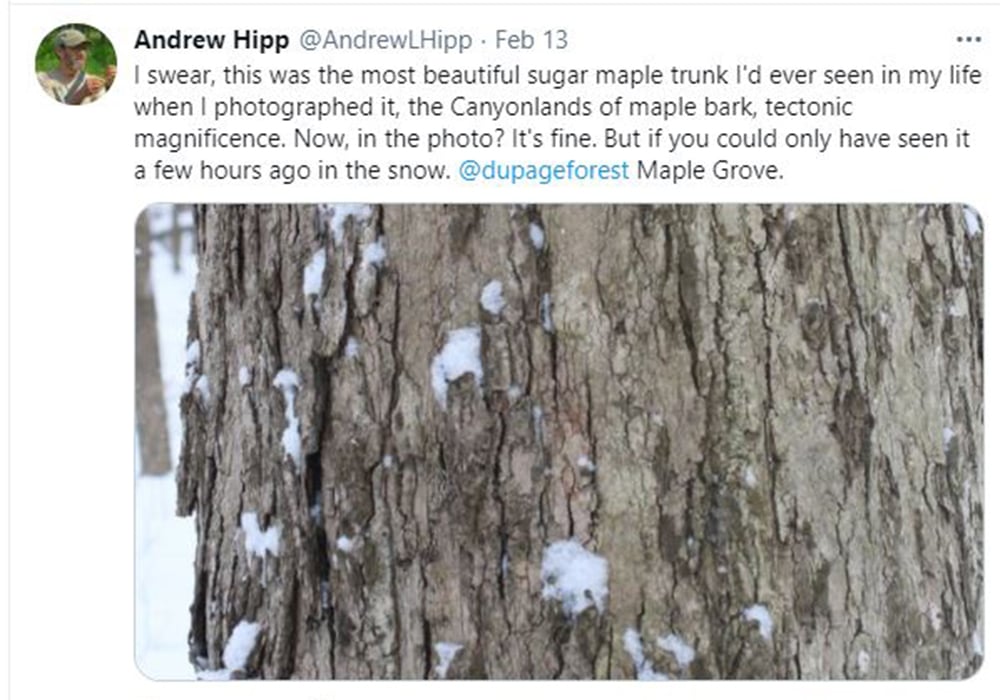 Hipp delights followers with his frequent Tweet observations of his discoveries in nature.

I’ve always cherished places I could get to easily and where I could be alone in the woods. I grew up in the suburbs, and for me the place I could get to was the Menominee River in Wauwatosa, the spot where the culvert dumped out from beneath Ridge Boulevard. I often went there on weekend mornings. It was a pretty degraded woods. I bet it still is. The trails were heavily impacted by dirt bikers, myself included. The wetlands were thick with reed-canary grass.

But I had the place to myself every time I went there, despite the fact that I lived in a typical suburb with lots of hubbub. I cultivated the habit of being outdoors then, and the feelings I had in that place were echoed by feelings I’ve had in the Rocky Mountains in Colorado, in the Boundary Waters in Minnesota, in the Canyonlands National Park in Utah, and in prairies along the Lower Wisconsin River. 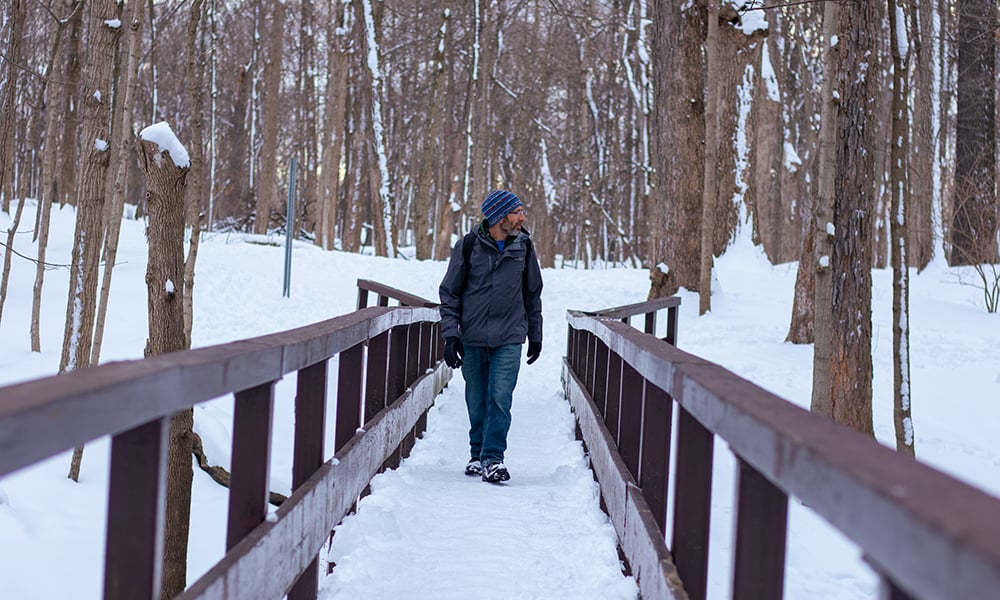 I started exploring the DuPage forest preserves my first summer on the job at the Arboretum, when I was conducting research into the taxonomy and genetic structure of Hill’s oak (Quercus ellipsoidalis E.J.Hill) and its relatives (mainly black oak, red oak, and scarlet oak).

I quickly learned how important the county forest preserves are to preservation of the Chicago region’s biodiversity. They are amazing, these remnants of 10,000-year-old plant communities in the remarkably diverse Chicago region. 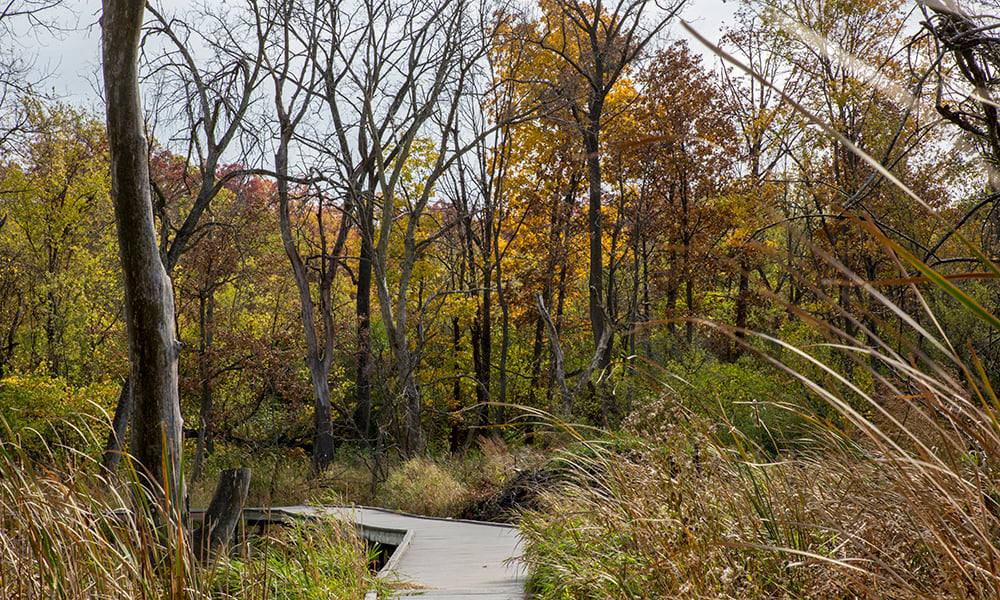 I love Maple Grove Forest Preserve in Downers Grove and have spent hundreds of hours there, documenting its changes from month to month and one year to the next. The past few weeks, I have been walking a lot more in Lyman Woods Forest Preserve in Downers Grove, because I have just realized (after 11 years of living in Downers Grove) that it’s only a 25-minute walk from my home. I cross the line between the St. Joseph Creek watershed, where I live, and the Lacey Creek watershed adjoining it to the north, walk 15 minutes through the neighborhoods, and I am there. No car needed, no bicycle.

I leave the squared-off streets and avenues, the homes buttoned up tight against the cold winter winds and the bustle of people driving off to school or work, and I feel as though I’ve stepped into the 19th century. I can spend an hour with beavers and buckthorn, geese, deer, white-footed mice, an abundance of mosses, bluebirds and wood ducks without ever leaving my community. 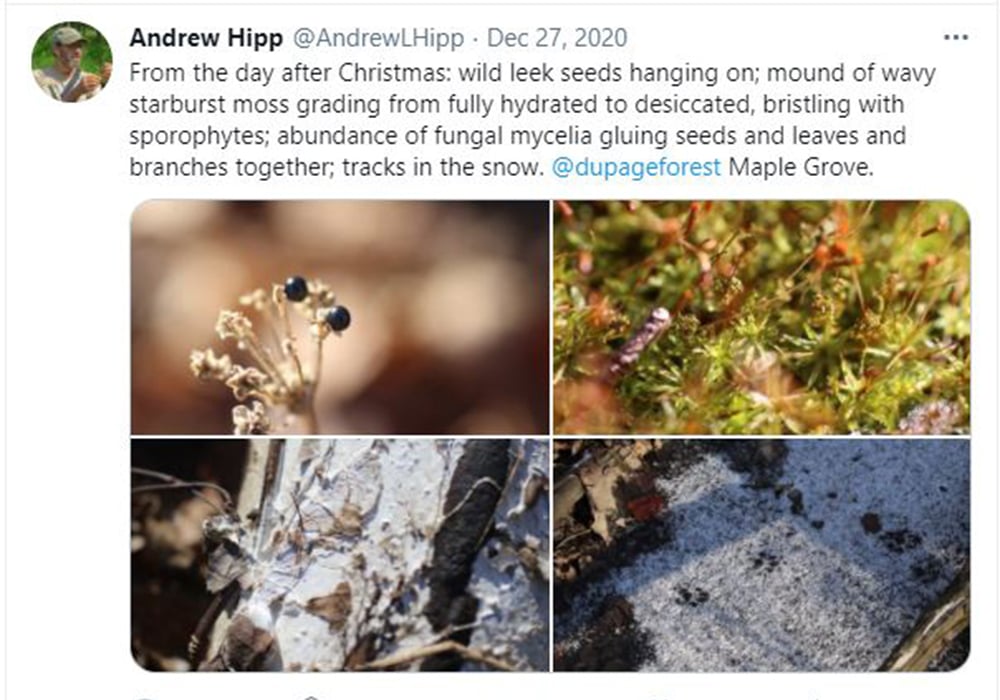 Hipp shares his real-time observations of what he discovers in the woods with followers on his Twitter account.

I wrote an answer to this question about a year ago that I’ll quote here: “I could never know this place well enough to be satisfied. All I do here is look and flip over logs and leaves, lie down on my belly to look at something else, come back to the same thing over and over, think about what I’m seeing. I don’t even collect data, and I honestly don’t have any interest in doing so. I come over and over for a selfish reason: because getting to know this place makes me happy, and seeing the same thing over and over again is, somehow, seeing something different every time.”

I wrote those words about Maple Grove, but I think they generalize. When a place is new, I do notice interesting things about it. Any new context makes the world feel fresh. This is why travel brings such joy. But at the same time, visiting one place after another allows us only a shallow perspective. The pleasures of coming to know the seasons derive from learning the nuances of the year’s trajectory from winter to summer and back again. It’s the same every year; it’s different every year. I keep coming back because understanding this will probably take me a lifetime. 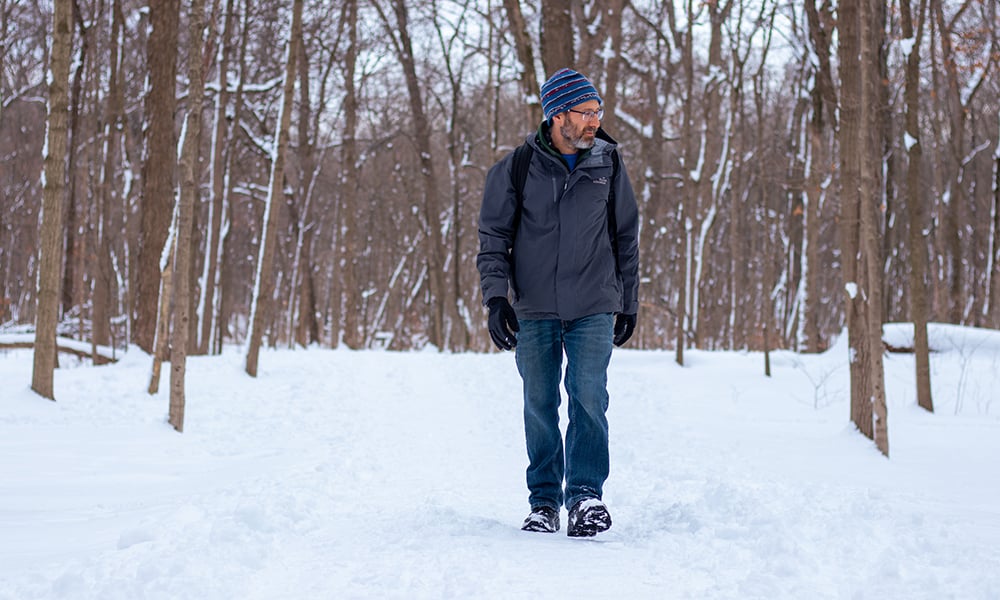 It is not so important to me that I have some place exotic to go as that I have some woods close by, close enough that I can get there every day if I so please. And I have realized for a long time, even when I was young, that such a place is a gift.

I have access to Maple Grove and Lyman Woods and all the rest of the DuPage forest preserves because I am fortunate, and because I’m on the right side (or the wrong side, depending on how I look at it) of the 1833 Treaty of Chicago. Because the Potawatomi were forced off the land where I live now in exchange for property in Kansas, my family and I get to live in a house in Downers Grove, within walking distance of Lyman Woods. I try to keep this in mind all the time, to always be grateful.

Favorite Things to Do in the Preserves

I spend a lot of time brushing the leaf litter aside and rolling over logs to see what’s hidden from us. I think that’s where the most exciting activity is. 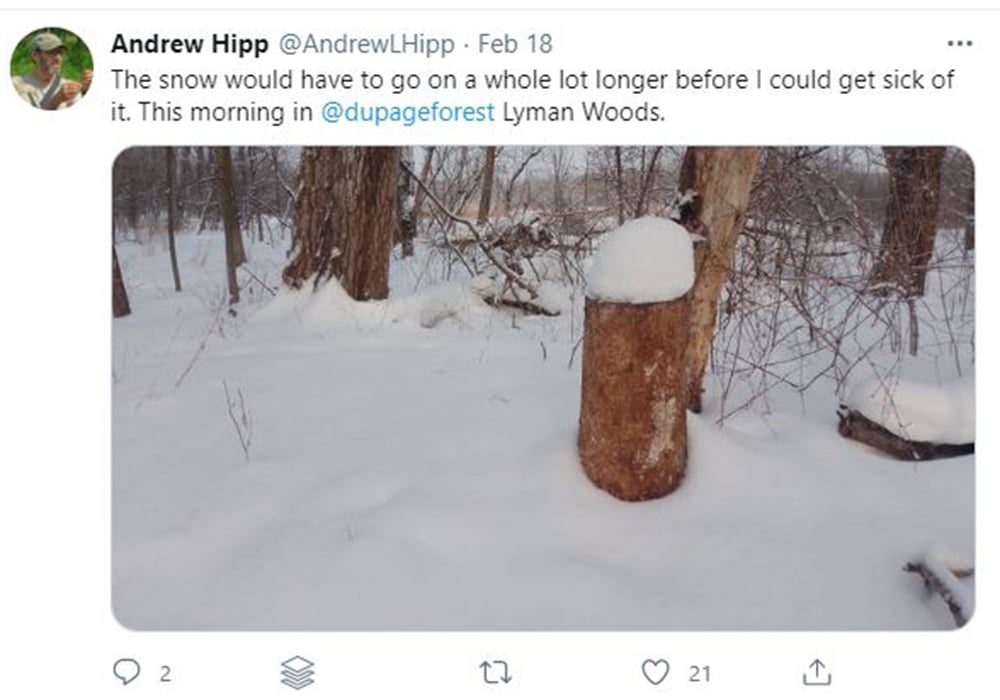 Hipp's tweets about his forest travels convey his deep love for nature no matter what time of year.

Writing of watching the Cairngorms from a nearby mountain, Nan Shepherd wrote, “Coming steeply down its front, one watches the high panorama opposite settle into itself as one descends. It enchants me like a juggler’s trick. Every time I come down I want promptly to go back and see it all over again.” I don’t think I could say it more clearly than that. 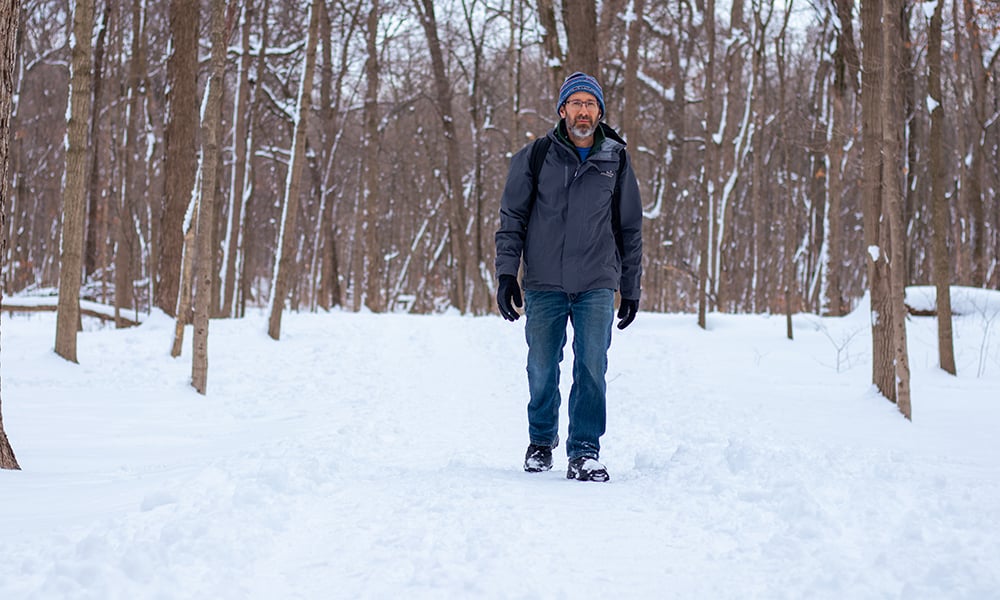 It’s hard to pick out one, so if it’s alright, I’ll share two.

Roadkill by Chase Twitchell
I want to see things as they are
without me. Why, I don’t know.
As a kid I always looked
at roadkill close up, and poked
a stick into it. I want to look at death
with eyes like my own baby eyes,
not yet blinded by knowledge.
I told this to my friend the monk,
and he said, Want, want, want.

I love this poem because it reminds me that the business of studying the world, which is both my vocation and my avocation, is as acquisitive as any other kind of hankering. This makes nature study both essential to my wellbeing and risky for the soul, if you believe in a soul, which I think I do.

The second quote is from a poem my wife once sent to me. It’s a bit too long for the blog, but I’ll give you an excerpt:

As It Is by Dorianne Laux
The man I love hates technology, hates
that he’s forced to use it…

He walks when he can, through the hills
behind his house, his dogs panting beside him
like small steam engines. He’s delighted
by the sun’s slow and simple
descent, the complicated machinery
of his own body. I would have loved him
in any era, in any dark age…

I love this poem because it tells you exactly what I love about being part of the natural world, and because I feel so lucky to be able to spend my life with someone who knows me so well. I wouldn’t be who I am if it weren’t for Rachel and for the many hours I’ve spent in the woods. It all goes together. 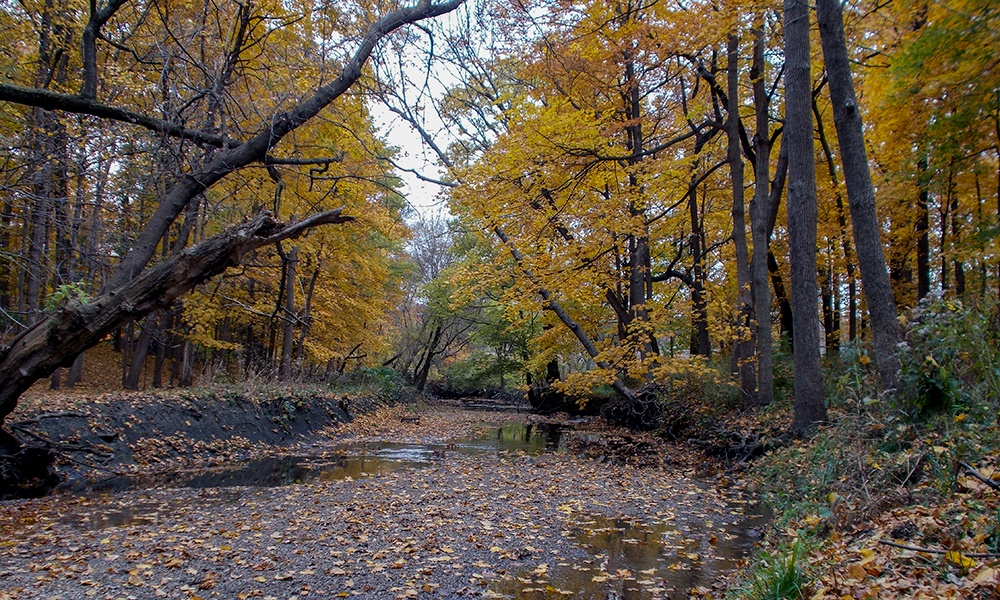 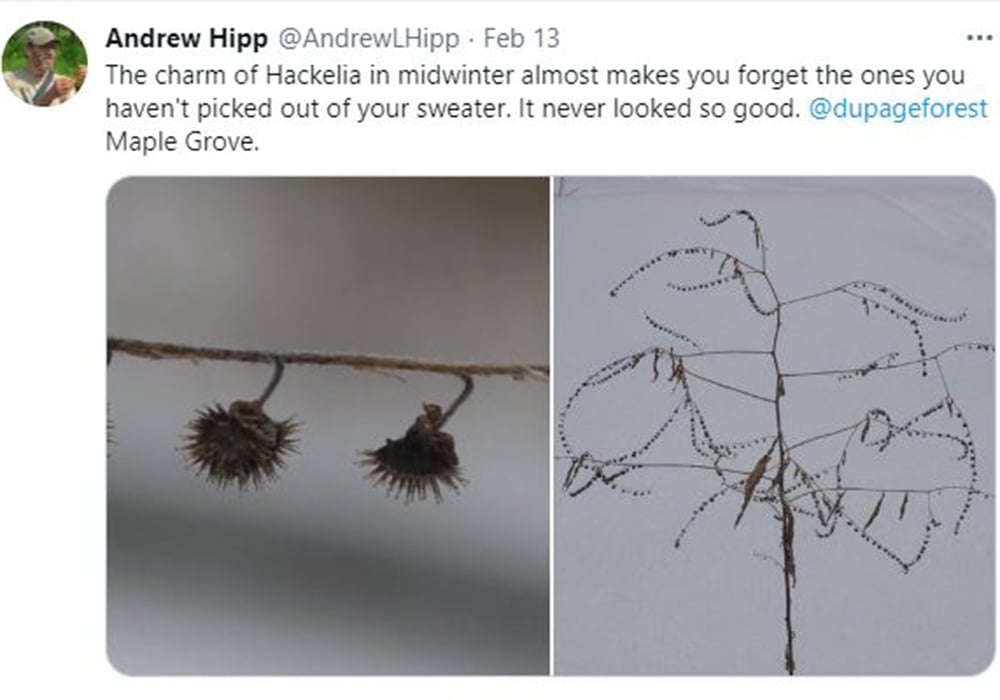 One of Hipp's tweets about Maple Grove Forest Preserve in Downers Grove.