Twice a year, DuPage County’s forest preserves play host to hundreds of thousands of weary travelers: migrating birds looking for places to fuel up as they move between their summer and winter homes. But this season, none of these visitors likely excites birders as much as the warblers, the jewels of the spring migration.

Worldwide, two groups of birds share the common name “warbler,” Old World species from Africa, Asia and Europe and New World species from the Americas. Despite the name, which New World species likely acquired from explorers who thought they were the same as the ones back home, the two do not belong to the same family. New World warblers are in the Parulidae family, and of its roughly 116 members, DuPage birders have recorded over two dozen. 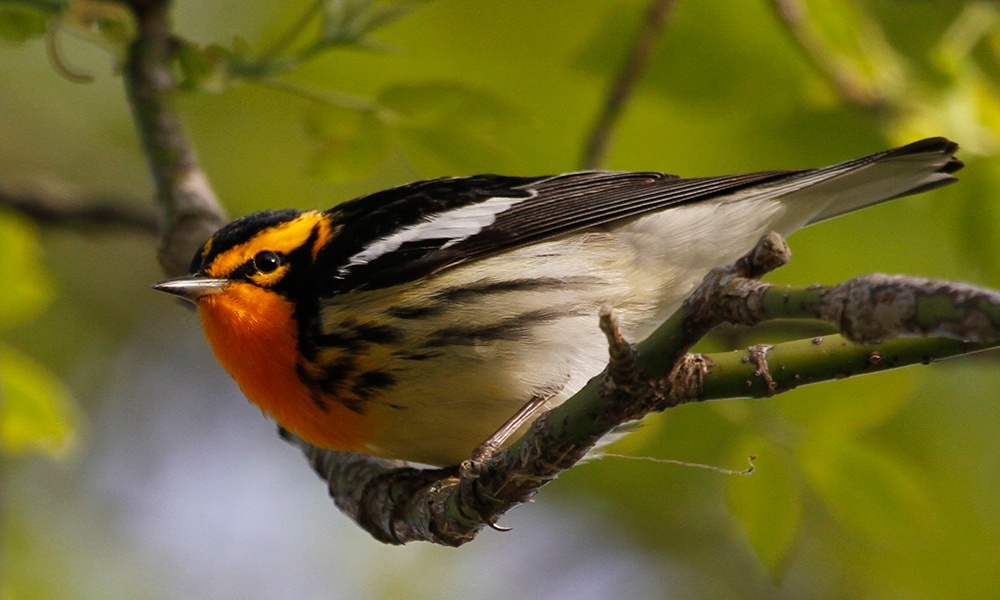 Habitat preferences depend on the species and time of year, but the majority of New World warblers require woodlands, forests or dense brush, the reason birders also call them “wood warblers.” Most of these treetop denizens are insectivores for at least part the year, and our forest preserves’ abundance of prey, particularly insect larvae, provides the fuel they need for their incredible journeys.

Warblers’ spring migration is triggered by changes in daily sunlight and an evolutionary timetable established over thousands of generations. The end result is a schedule that places these birds in northern climes during the springtime food frenzy that eruption of tender insects set in motion by the presence of newly sprouted trees and shrubs. Because this takes place in such a narrow window, the best time to see migrants in this region is from the end of April through the end of May; by June most are in breeding territories further north. They will pass through again in the fall on their way to their winter homes in Central and South America, but now is when their breeding plumage makes them breathtaking to watch and easier to identify.

It’s hard to pick the most beautiful warbler that visits DuPage, but the Blackburnian, named for English naturalist Anna Blackburne, should be on the shortlist. Its brilliant orange throat (it’s the only warbler in North America with this particular marking) pops against the surrounding black plumage, making it slightly reminiscent of the red and orange paint jobs hot rodders used to enhance their roadsters in the ‘50s and ‘60s. Many people hooked on birding likely owe it to their first sightings of this bird, which uses forest preserves such as West DuPage Woods in West Chicago (especially the Elsen’s Hill area) and Fullersburg Woods in Oak Brook as layovers this time of year.

Another showoff is the American redstart, which doesn’t have “warbler” in its name but is a Parulidae just the same. (Because the adult males are decked out in black, orange and white, I like to call them the “Halloween birds.”) Like members of the flycatcher family, they love to snatch airborne insects. Redstarts will even fan their tails to flash their patches of orange or yellow to “scare” their prey. Birders can spot them at a number of locations, especially Waterfall Glen Forest Preserve in Darien.

The black-throated green warbler features a yellow face and olive crown and back, but birders often hear this migrant before they see it. It’s known for its familiar but ceaseless “zee-zee-zoo-zoo-zee” song. The Back 40 at Willowbrook Forest Preserve in Glen Ellyn is a great place to see and hear them.

With its black cap and white-banded wings, the blackpoll is not the most colorful warbler, but its stamina earns it a spot at the top of any birder’s life list. Its five- to six-week trip north takes it 3,500 miles from Brazil to Alaska via the Gulf of Mexico. In fall it heads to New England before beginning an 80-hour nonstop flight south over 2,000 miles of open water. You can spot blackpolls taking some well-deserved breaks at several forest preserves, including St. James Farm in Warrenville and Salt Creek Park in Wood Dale.

But not all warblers use DuPage merely as a stopover. The yellow warbler raises its family in our area’s shrubby wetlands, brushy fields and forest edges, where you can spot its solid buttery plumage and hear its “sweet, sweet, sweet, I’m so sweet” song. Some species even stay year-round, such as the yellow-rumped, our most common warbler. You can see them hunting for insects in spring, when the gold patches on their faces, rumps and sides pop against their crisp gray and white feathers, but will also find them in winter foraging heavily on berries.

As with all wildlife, though, warblers are not immune to changing and difficult situations. When spring weather arrives in March instead of April, a phenomenon that happened here just last year, many trees and shrubs bud early — up to two or three weeks early — triggering dormant insects to emerge ahead of schedule to take advantage of the new shoots. As a result, when migrating warblers arrive, there’s far less food. And they face manmade stressors as well, such as the negative effects of logging and tar-sand mining in Canada’s boreal forests, invaluable nurseries for 325 species of warblers and other birds.

Warblers are a big part of DuPage birding life, and like works of art at a museum, many of these forest jewels will take your breath away.