As a retired teacher, it only makes sense that John Cebula continues to teach. He’s active in the DuPage Birding Club and presents many bird-related program throughout the area.

He also has a nature-themed Facebook page, John's Natural DuPage, and has written a (unpublished) book, Wild DuPage, a memoir of sorts based on 50 years of observing nature in DuPage County. He’s also been published in several bulletins and journals.

He has lived in DuPage County since 1968, when his family moved to Lombard two weeks after he graduated from high school in Milwaukee, WI. After earning degrees in English language and literature, he and his wife, Paula, moved to Lombard and he taught in the Glenbard high schools, first at East and then West. He retired in 2007. He has also taught at College of DuPage, where he stills has a volunteer affiliation. 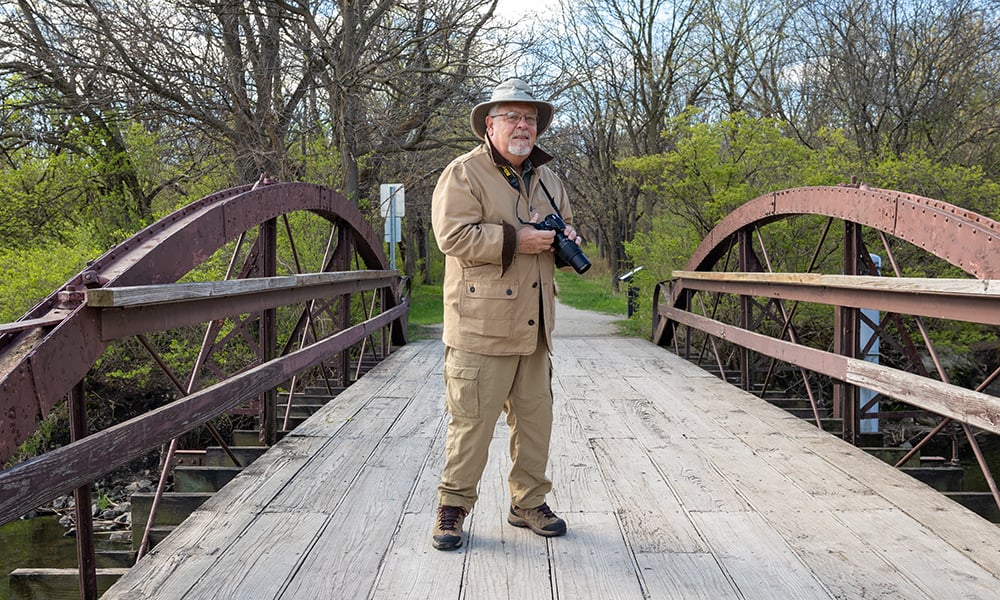 Nature, especially birds, insects, and reptiles, have always played a big role in my life. I realized in second grade that the interest other boys had in cars, sports, and things that went “boom,” I had in nature. 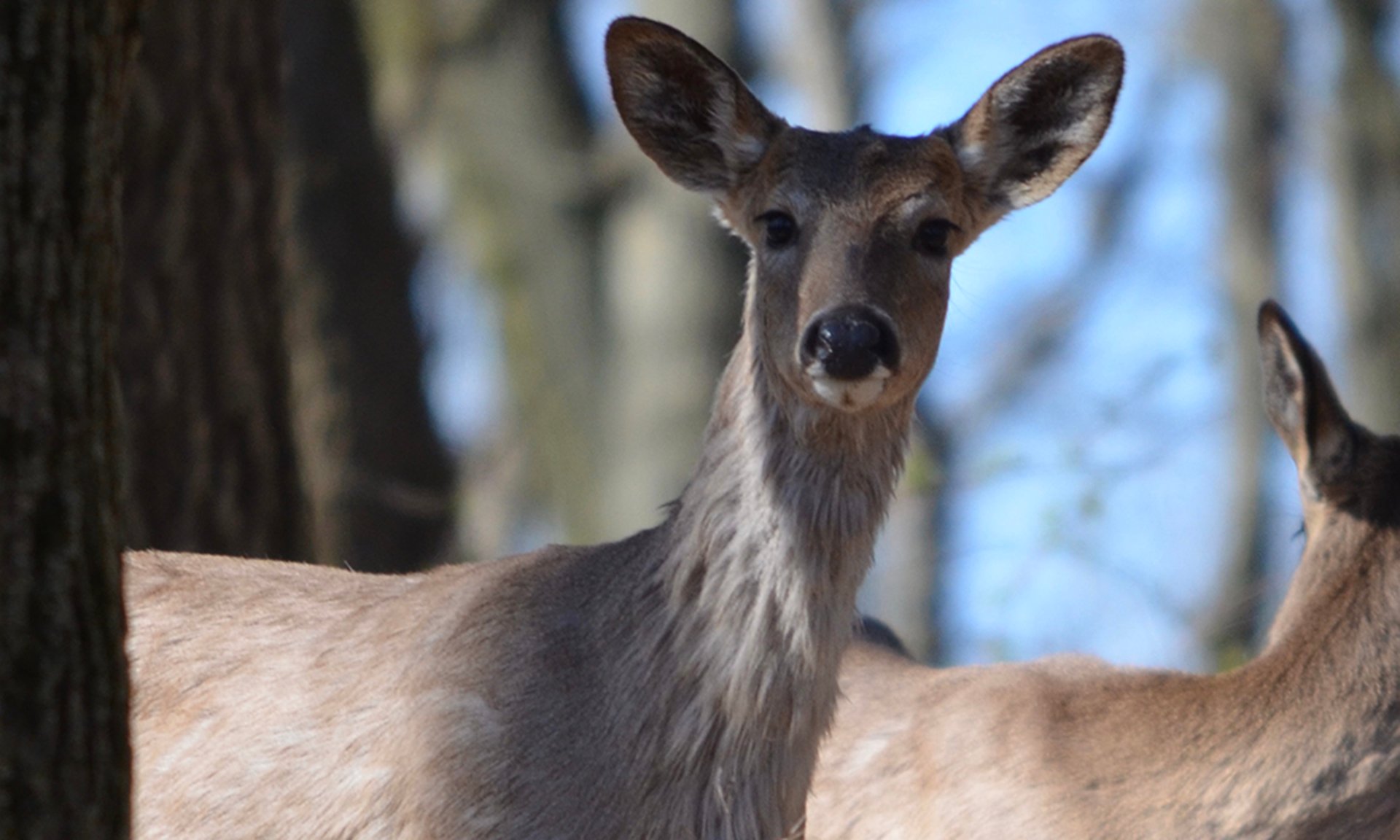 From 1968 through 1974, the only DuPage preserve I was aware of was Churchill Woods Forest Preserve in Glen Ellyn, and then only the section off Crescent Boulevard. I was too busy with university and working to pay tuition to spend much time exploring the county’s preserves. Once I was out of school, I found myself again paying attention to birds and joined the Big Bluestem Chapter of the Illinois Audubon Society, as well as the Wheaton chapter of the National Audubon Society. This would have been in the late ‘70s and early ‘80s.

With these groups, I visited sites in the county I was unaware of: the Illinois Prairie Path through Timber Ridge Forest Preserve in West Chicago was a favorite. Many of today’s preserves didn’t exist at the time, or they were being developed and were “off limits” to the public (I remember being cautious visiting what is today Mallard Lake Forest Preserve in Hanover Park because of all the “No Trespassing” signs I ignored).

What really got me involved with the county’s forest preserves resulted directly from teaching a birdwatching class for the Lombard Park District. At the time a large area south of Roosevelt Road and west of Main Street in Lombard (now playing fields and a subdivision) was undeveloped and a great place to watch birds. I was leading a field trip and happened to glance down and see a plains garter snake crawling across a lady’s foot. I quickly learned that jolting down and standing up with a live snake a few inches from someone’s face does not always elicit appreciation. 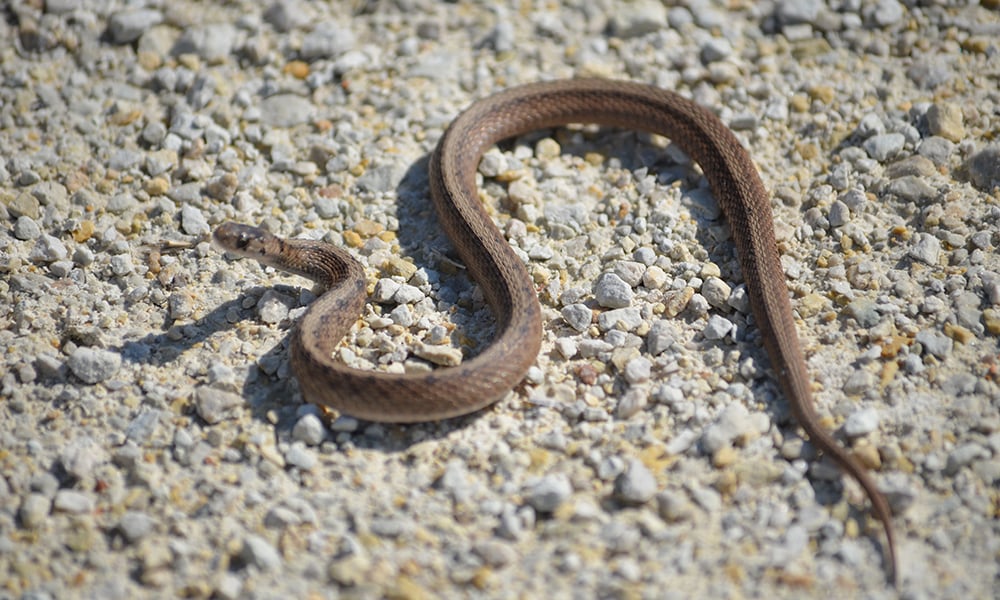 I took the snake home and searched through my field guides, trying to see what other snakes I might find in the county. Finally I contacted the DuPage Forest Preserve District. Forest Preserve District ecologist Dan Ludwig, who was working at Willowbrook Wildlife Center at the time, contacted me and asked if I would be willing to survey for reptiles and amphibians in DuPage forest preserves. I said “yes,” and soon became familiar with sites from Pratt’s Wayne Woods Forest Preserve in Wayne to Waterfall Glen Forest Preserve in Darien. Dan took me to the area that is now Fullerton Park in Addison, and we visited one of my favorite sites, a private area just south of Fullerton Avenue.

There are some preserves I haven’t visited: the District seems to keep growing, and I sometimes need to really dig in my memory to recall if I’ve been to a preserve or not. The forest preserves of DuPage County, though, are important to me on so many levels. 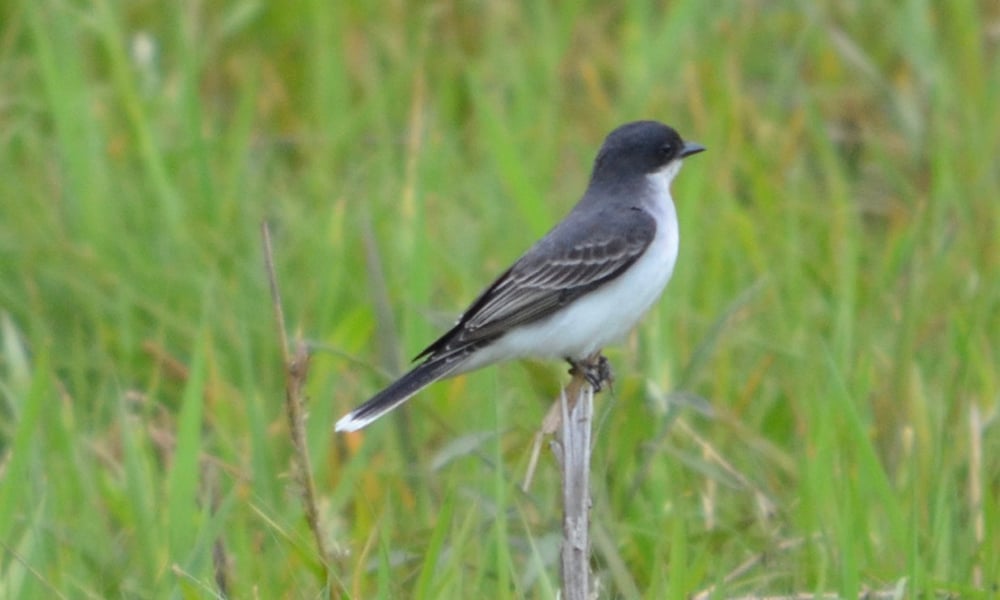 At first I was going to say, “I like them all — I have no favorites,” but I guess the preserve I really have the fondest memories of is Hidden Lake Forest Preserve in Downers Grove, especially the Hidden Lake that existed before the construction of I-355. A big part of the reason for this is because of the abundance of herptiles (in terms of species and individuals) I found there during my survey. There was a barn area strewn with trash where I found a sizable colony of eastern milk snakes, a locally rare species. Tiger salamanders, northern brown snakes, and both local species of garter snakes could be found with little or no real effort; eventually I also found fox snakes.

The real treasure was a pond (I called it “the real Hidden Lake”) that had a colony of eastern newts. (I must confess that for the past four or five years I have revisited many of the sites I had surveyed and have not been able to locate any of these animals). 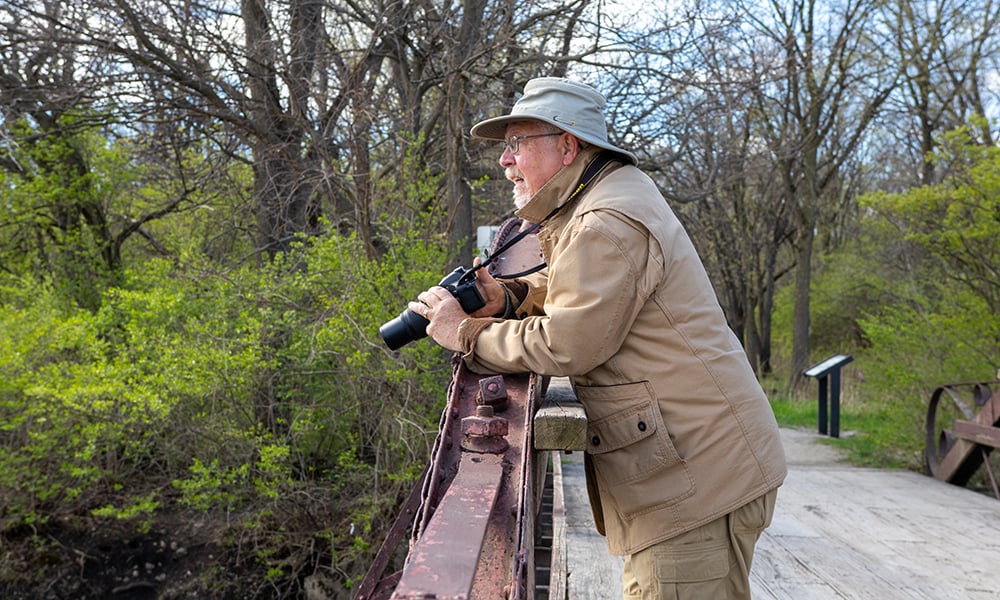 The woodland to the east of the barn site also had a number of birds that I seldom saw in the county except during migration: rose-breasted grosbeak and scarlet tanager are two species I almost expected to see nesting in the summer in the Hidden Lake woods.

Herrick Lake Forest Preserve in Wheaton is another preserve that holds good memories for me. Most of the area south of the Civilian Conservation Corps shelter at the south end of the lake was open field. Pheasants were common in the field, and on at least one occasion another birder, Steve Sample, and I heard a northern bobwhite (quail). At the time of these memories, there were essentially no trails through the preserves, so we did a lot of bush-whacking. 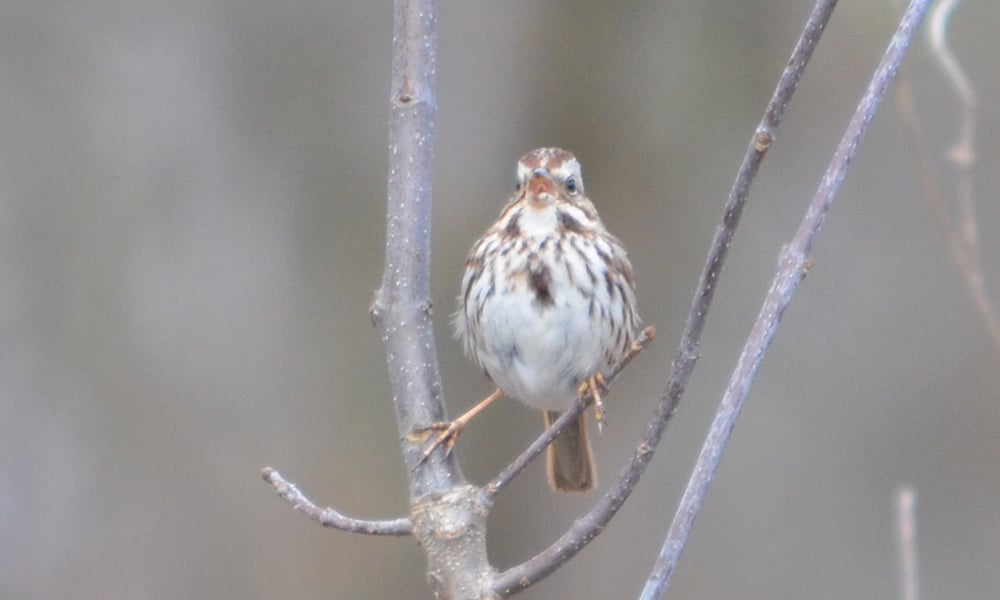 A song sparrow at St. James Farm in Warrenville. Photo by John Cebula

Let me create context here: A few years ago my wife and I bought a small condo in Naples, FL. I am an hour away from Audubon’s Corkscrew Sanctuary and just a little further away from “Ding” Darling Sanctuary on Sanibel Island. Some people who share my interest in nature have expressed their envy.

I have also become less “focused” on watching birds or surveying reptiles and butterflies than I was — I am more “general” now. So every visit to a preserve reveals a treasure to me.

Nature’s Lessons and How Nature Inspires

The first time I saw sandhill cranes was a migrating flock that flew over our house in Lombard just as I was helping my father, who was dying of stomach cancer, to get in the car. It would be the last time Dad visited us.

These cranes have migrated over the county since before the Pleistocene. Every fall and spring when the cranes migrate over the county, nature reminds me of my mortality, but also that there is something greater than myself. 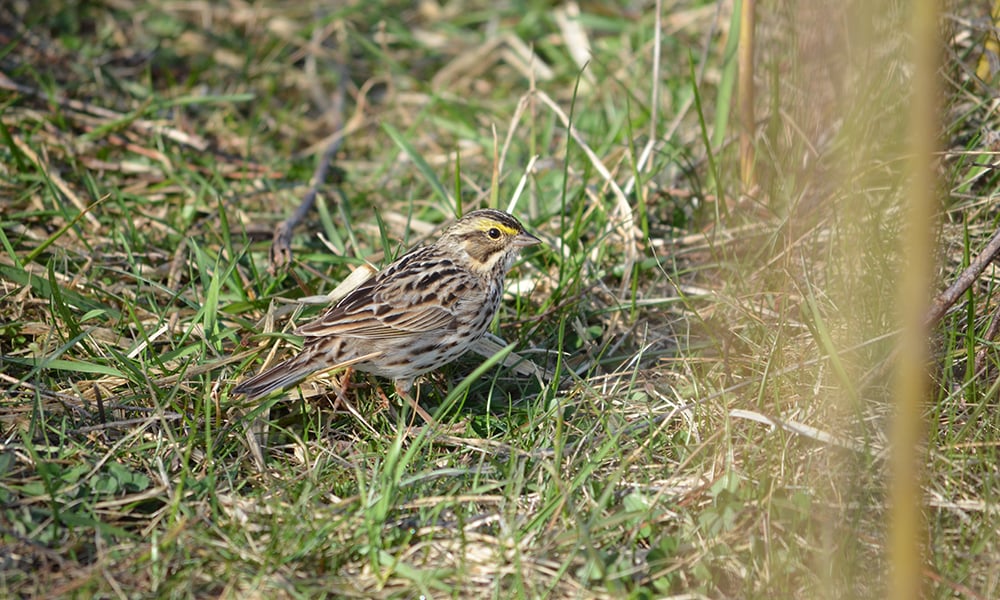 Over the last few years, my camera is my constant companion in the preserves. In 2020 I set a goal of photographing 100 species of birds; because of the DuPage forest preserves, I met and exceeded that goal. This year I want to concentrate on insects and plants.

“I spent the summer traveling. I got halfway across my backyard.”— Louis Agassiz

I like this because (as I say in my book) the wonders of the world are in our backyards. DuPage forest preserves certainly exemplify this. 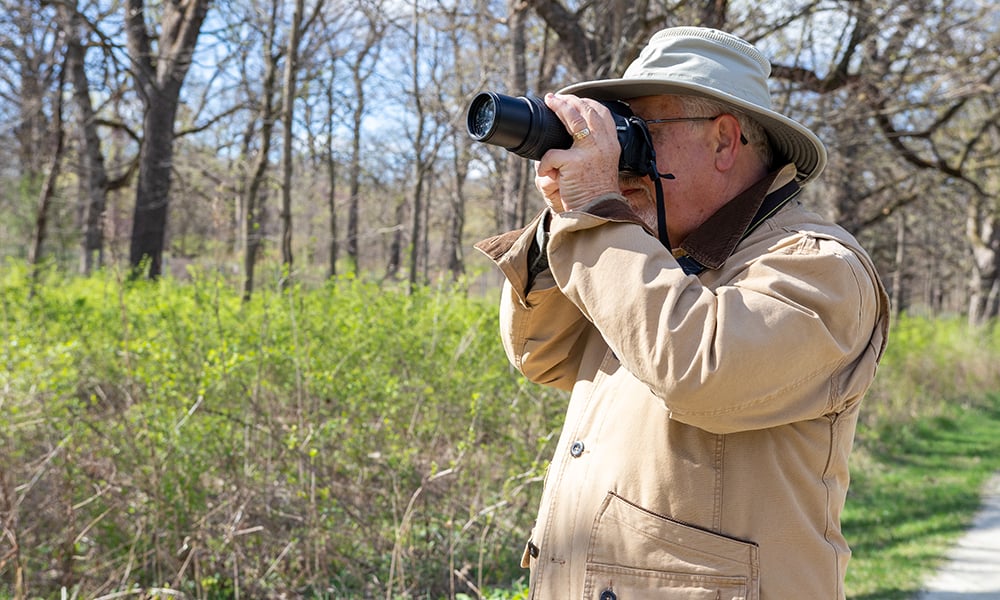 I was taught to read with the “Sally, Dick, and Jane” books. The first word we were taught was “Look.” So I would tell people, take the time to look! The most popular presentation I do for the DuPage Birding Club is about attracting birds. I title it “I’ve Seen 100 Species in My Yard.” I emphasize that I live in a residential area in Glen Ellyn some distance from any natural area. There is nothing special about my yard (except that I do garden for butterflies and hummingbirds). But I look for things, and when I look, I see things. When I listen for things, I hear things.