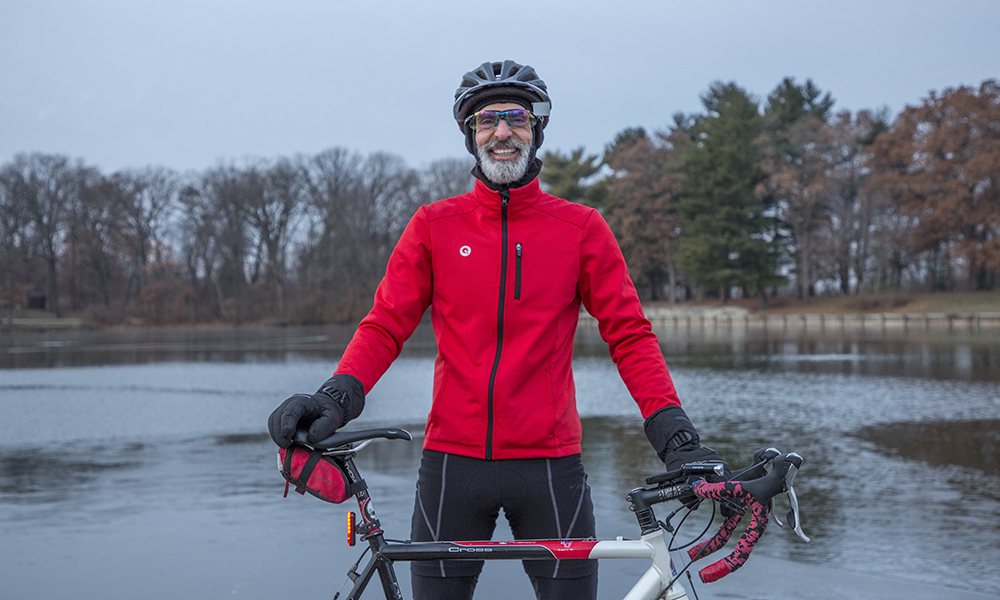 Before he could even walk, Fred Faller connected to nature growing up in western New York. Now he prefers doing so by bicycle or cross-country skis using online maps and GPS devices.

Faller and his wife Nancy moved to Glen Ellyn from Buffalo, New York, with their two young sons in 1995 and raised their family. Now they are empty nesters with two lovely granddaughters. Their older son lives in Forest Park, while their younger son lives in Ventura, California.

Faller met his wife while in college at the State University of New York at Buffalo, where he also earned a BA in environmental studies. He works as a marketing communications specialist with the ComEd Energy Efficiency Program.

“My wife and I are both musicians — she’s a pianist and I’m a drummer,” Faller said. “We met doing musical theater at the university, but I started playing the drums much earlier in life — like many in my generation, after seeing Ringo perform with The Beatles on the Ed Sullivan Show. I have four drum sets and still play in three different bands.”

Growing up in the 1960s, kids played outside. I spent a lot of time riding bikes and exploring nature in undeveloped areas in western New York. So I guess the nature bug has been in my blood most of my life. I am a September baby, and my parents took me to Letchworth State Park in western New York when I was just a newborn.

Known as the Grand Canyon of the east, the fall colors there are absolutely astounding, and I believe those are some of the first images I experienced in life. So the beauty of nature was imprinted on me very early and that’s why when spectacular fall colors appear, my heart nearly explodes with joy. 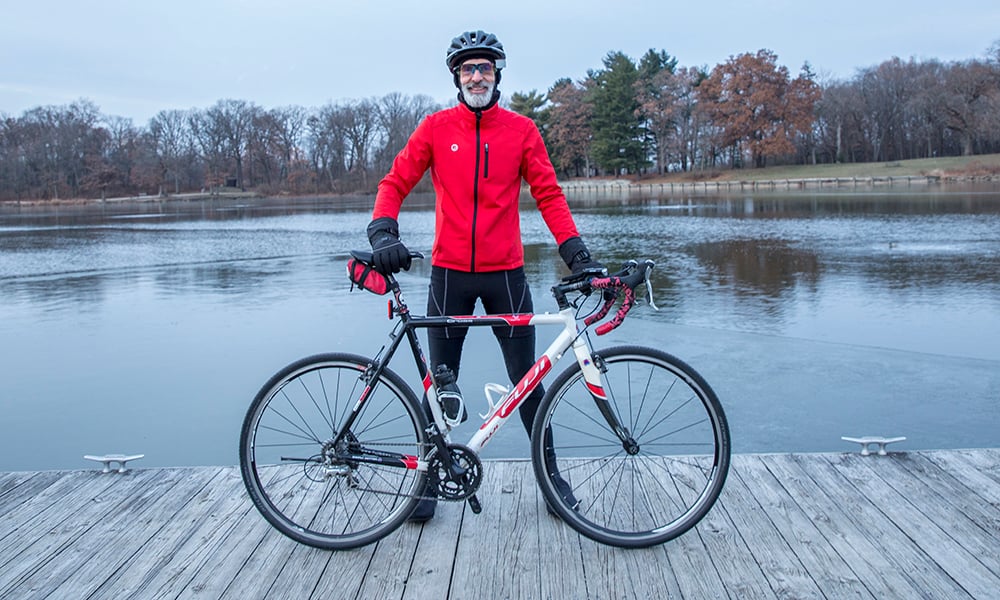 I first discovered Herrick Lake Forest Preserve in Wheaton in 2000. I had been running and riding my bike on the Illinois Prairie Path and the further I went the more I discovered. Now I use online maps and GPS devices to get around and discover the wealth of DuPage forest preserves.

Also, I’ve been riding the trail system for so long that I am acutely aware of the many improvements that have been made recently. I love riding trails that I haven’t been on in some time and discovering new bridges, smooth asphalt, and new connections that make my ride more enjoyable. 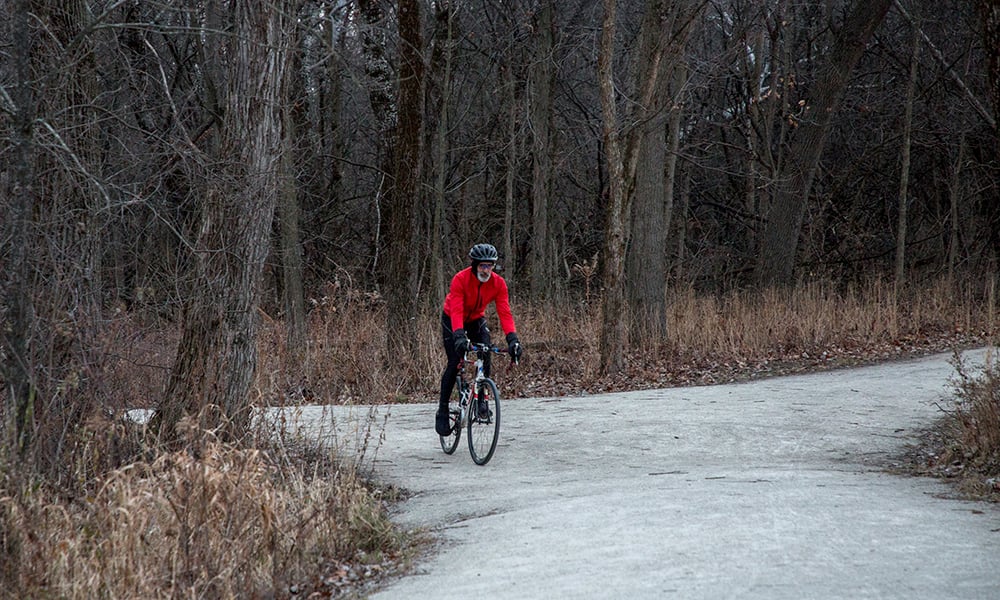 I would have to say that Herrick Lake is a perennial favorite of mine. I enjoy its twisting woods and open prairies. I can get to it easily and it connects to other nearby forest preserves like Danada, St. James Farm, Blackwell, McKee Marsh (north end of Blackwell), and Warrenville Grove. I also love riding the loop at West DuPage Woods because its rolling hills feel like a roller coaster.

This year I discovered Greene Valley in Naperville, and its west side is like a combination of Herrick Lake and West DuPage Woods. So it’s quickly becoming a new favorite of mine. I like to ride first thing in the morning because the day is fresh, there’s very little traffic, and sometimes you can see beautiful sunrises and magical morning mist. 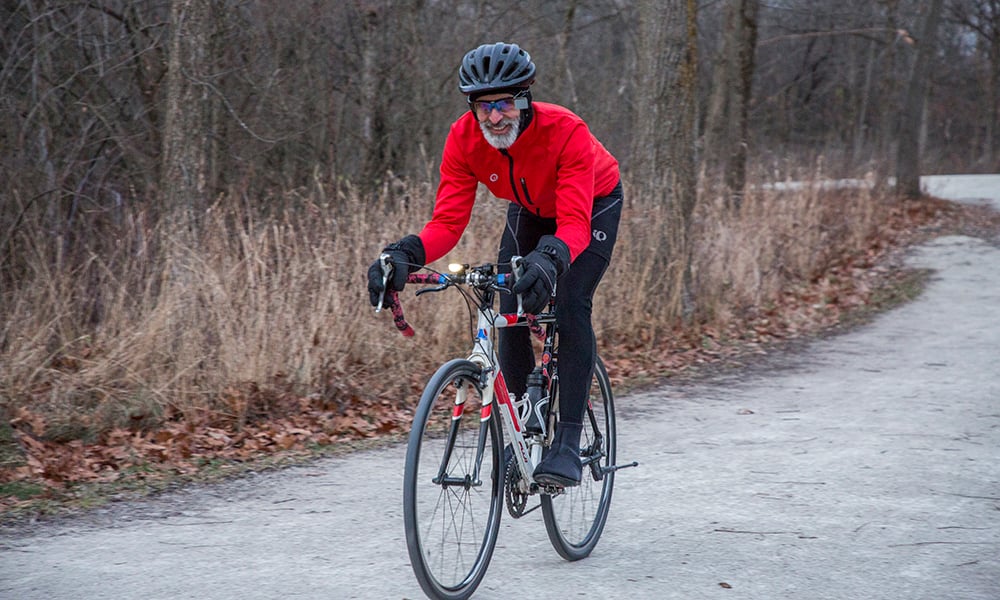 I love seeing nature change through the seasons. Spring is full of new life and fragrant blossoms. In summer, outdoor activities just feel so natural and I can ride for hours on end.

Autumn brings the amazing array of blazing colors whose beauty sometimes stops me dead in my tracks. And in winter, if we’re lucky enough, there’s enough snow to go cross-country skiing. 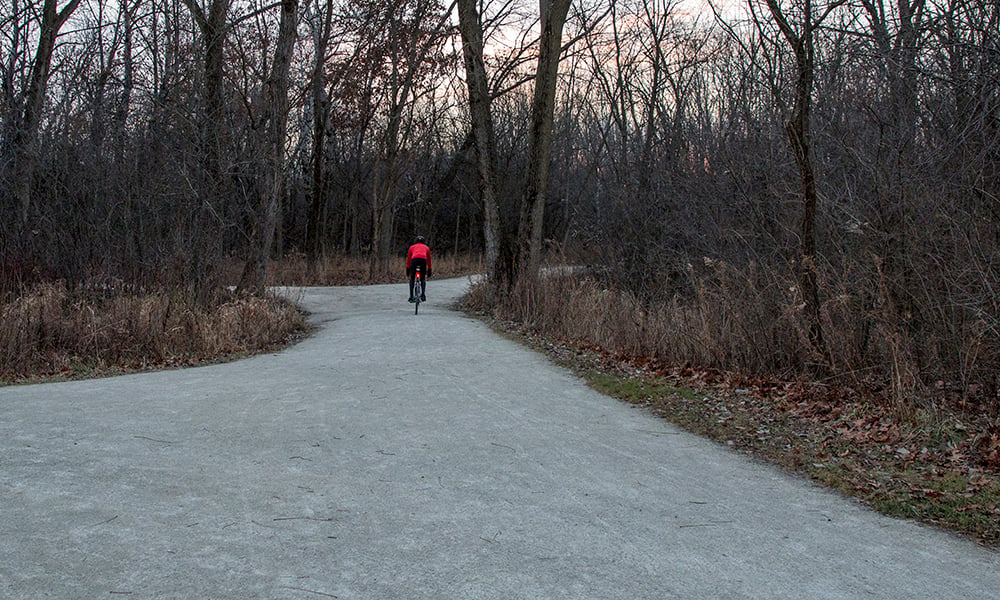 In the last 20 years I’ve become an avid cyclist. I have five different kinds of bikes and two of them are perfect for riding through the forest preserves. In 2020 I was unemployed for three months and I spent a lot of time on two wheels exploring ways to safely connect distant forest preserves with each other.

I generally ride solo and have gone as far as the Wisconsin border and back, 115 miles on my own. But connecting one forest preserve with another is my prime directive these days. Recent rides include Knoch Knolls and Greene Valley, Mallard Lake and Maple Lake at Meacham Grove, West DuPage Woods and McKee Marsh.

As a cyclist, I will go out of my way to stay safe. I always prefer side streets and trails that are off the beaten path, and it’s much more interesting that way as well. While my nickname is Fast Freddy, I’ve started to slow down recently and soak in the sights as I ride. Many times I’ll stop and take pictures of inspiring nature scenes, always with my bike in the frame. I’ll share them on social media, and many people have really liked them. I have an Instagram account where I post my nature pictures and you can see them at fastfreddy.faller. 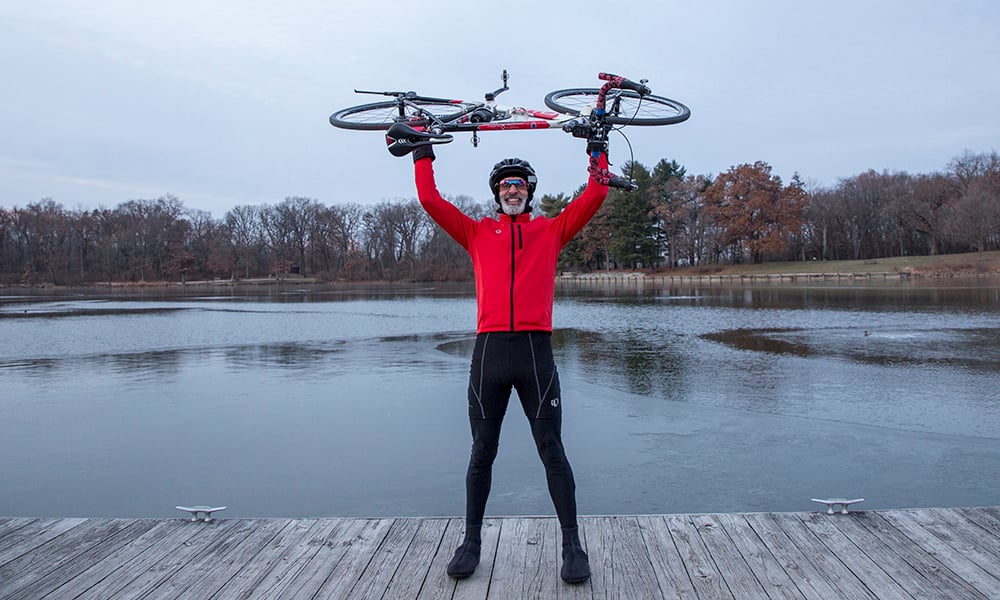 While I love Chicago’s built environment, the importance of preserving natural spaces was recognized and built into the Burnham Plan of Chicago more than 100 years ago.

This same approach appears to have been applied to DuPage County and it enhances the quality of life for all residents. As a species, we develop and destroy nature at our own peril. Nature does not need us. We need nature. Do you like to breathe? Then protect the trees that give us oxygen. 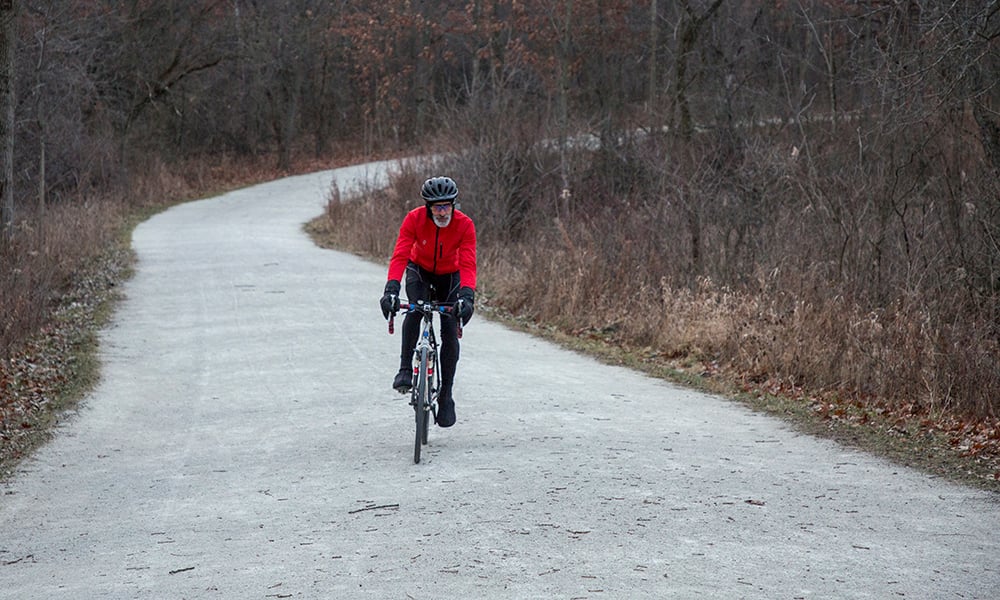 Nature inspires me because of its grandeur, its overwhelming size and the promise of rebirth. As the deep woods and the open prairies cycle through the change of seasons, I marvel at the everchanging scenery, knowing that next year things will be largely the same, but also different. DuPage forest preserves inspire me because the wide pathways and narrow trails allow me to become immersed in nature. I feel a connection to the planet that I really don’t get any other way. 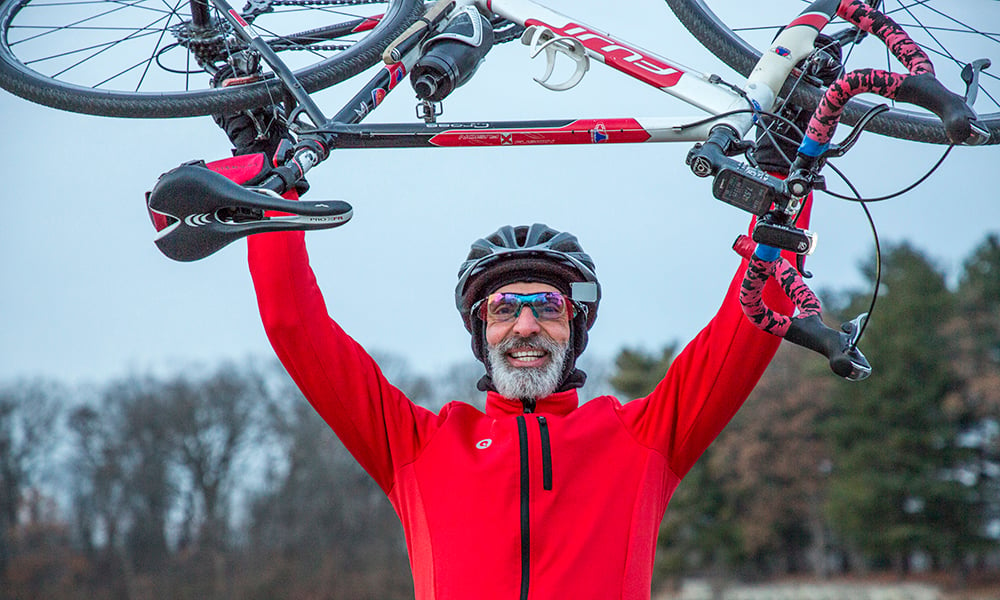 “I went to the woods because I wished to live deliberately, to front only the essential facts of life, and see if I could not learn what it had to teach, and not, when I came to die, discover that I had not lived.” ~ Henry David Thoreau

While I don’t live in the woods like Thoreau, I think it’s important to get out of your house and embrace nature. The effects of climate change are upon us and they’re going to get worse before they get better. So I want to live to the fullest and enjoy the outdoors while I still can.

Get up close to nature and thank a tree for giving you the oxygen you need to breathe. 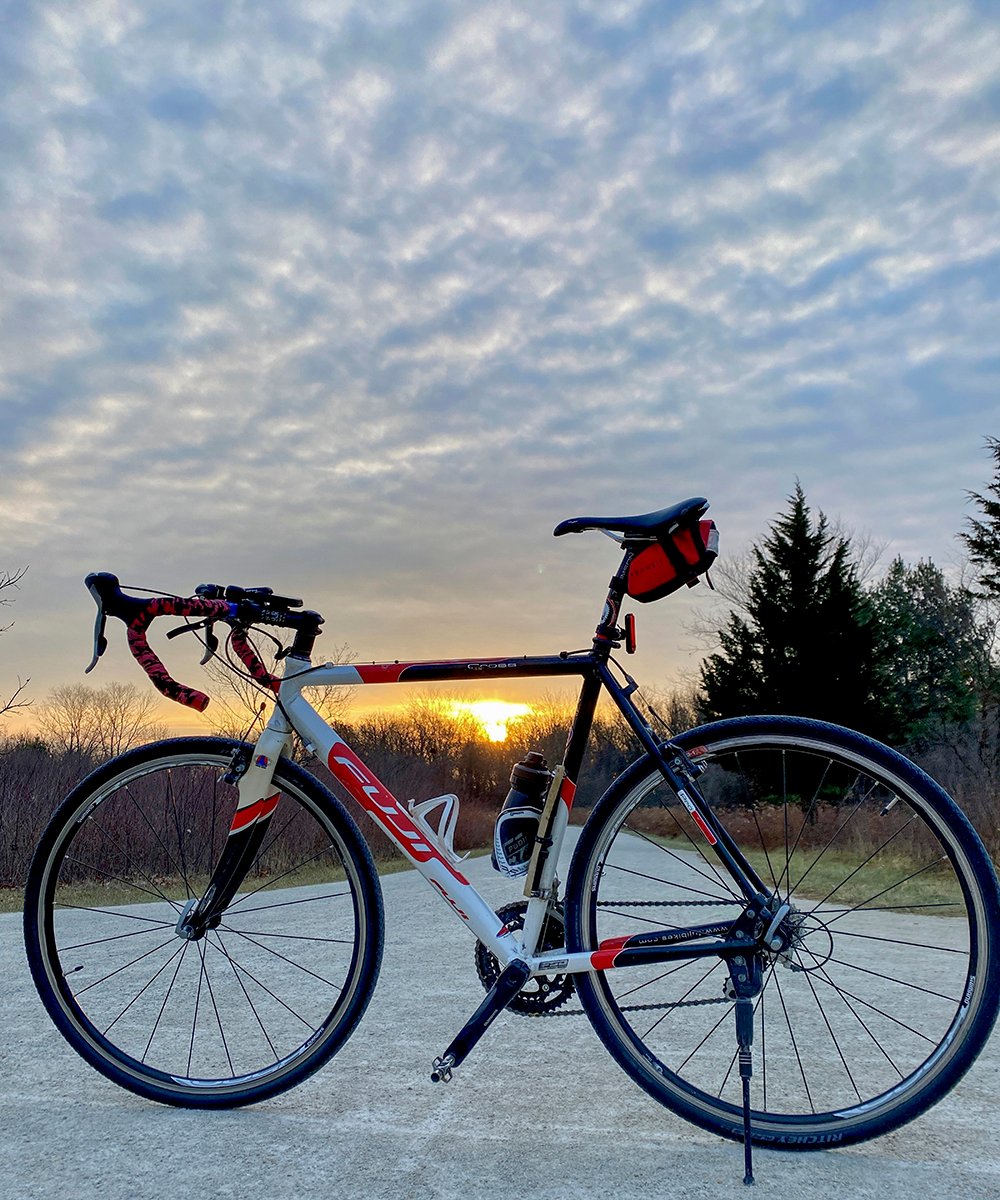 Faller stops to capture the sunrise during an early-morning bike ride at Herrick Lake Forest Preserve in Wheaton.